“I’m a Decepticon Seeker. That is my identity. What do I hope to accomplish by acting like something else?” –Thundercracker 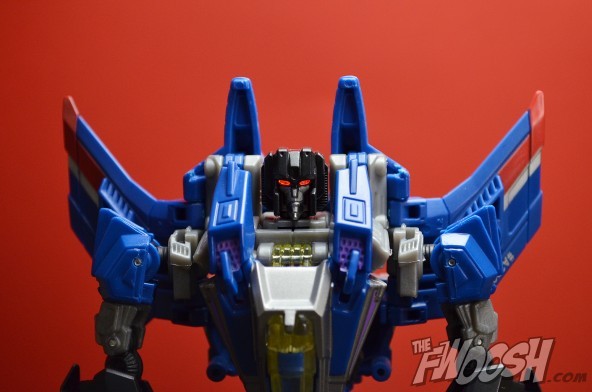 Every time I go to the store and see Transformers IDW figures on the pegs, I want to buy them all even though I already have a complete set of them. I’m so excited that we’re getting these that I want to help the line do as well as possible in an effort to tell Hasbro “YES. Make more of these, PLEASE.” I used to be as big a G1 zealot/sycophant as can be, but the current IDW comics totally broke me of that. Well, technically Beast Wars broke me of that, but IDW really sealed the deal. I used to be satisfied getting quasi-G1 updates of every character in Classics/Generations, but now I want IDW updates of every character, so I couldn’t be happier with the current Hasbro/IDW partnership because it’s giving me something new to be all excited about. I’m even excited to get a straight-up repaint like Thundercracker here.

To be honest, though, when it comes to Decepticons, Thundercracker has always been my personal favorite. Not Megatron, not Shockwave, not even Soundwave — it’s always been Thundercracker. He was my first Decepticon in the G1 days, and I can remember ripping the box open right in K-Mart before we even left the store. I had no interest in the other Seekers, just Thundercracker. And as I read the comic and watched the cartoon, he remained my favorite even though he was rarely in the spotlight. That ended up being a plus, however, because I was then able to create my own backstory for him and elaborate on his role in the Decepticons. Thankfully, IDW has fleshed him out a bit and has made him quite an interesting character, as the Spotlight issue that’s included demonstrates.

The packaging is super simple, but I love it and have been tempted time and again to buy a second set just to keep carded for display. It’s the comic. Because of Marvel Legends, I’m a sucker for a figure with a comic they’re featured in as a backdrop.

His bio makes him sound a little wishy-washy, but I like that they included the bit about his being doubtful of his commitment to the Decepticons. That point is the crux of the character as far as I’m concerned, and it’s why I like him so much. He doesn’t see the conflict in terms of black and white and has the potential to be something of an anti-hero, which is something I wish the comic creators would take a chance with. Writer John Barber sort of touches on that in the Spotlight issue, but not quite enough to satisfy me. 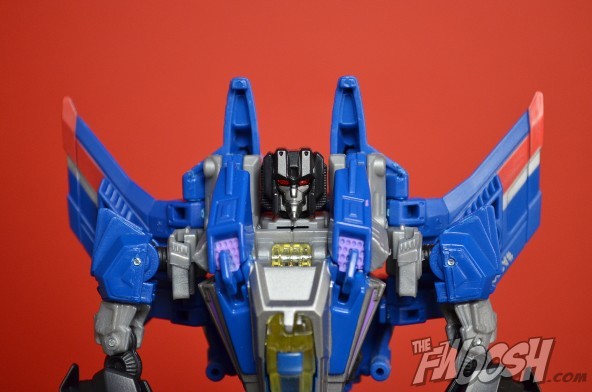 Like the original G1 toy, they went with a dark, deep blue for his primary color and it looks awesome. I always preferred this to the lighter blue they used for him on the G1 cartoon.

As mentioned previously, he is a straight-up repaint of the Generations Fall of Cybertron Starscream from last fall. There is nothing new here, so if you have Starscream, you should expect exactly that — only with much more blue. 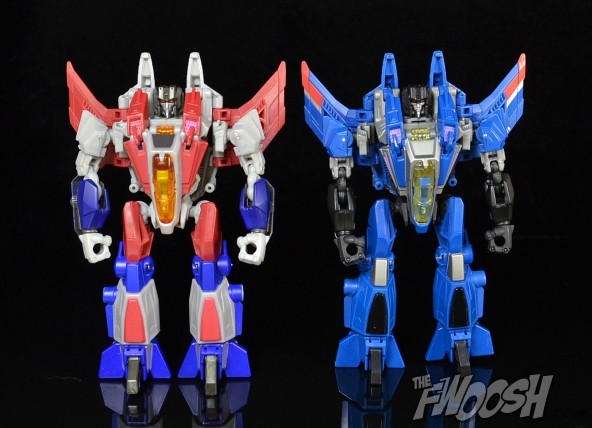 Maybe my bias for the character is showing, but I think the mold works better for Thundercracker than it did for Starscream. I think it’s the more consistent color pattern; it helps to reduce the jigsaw-puzzle effect that plagues Starscream. Even though he looks better, he does share Starscream’s other drawbacks, unfortunately. He’s very hollow, and it’s especially noticeable when his torso is viewed from the side. There’s a large gap of open space just behind his front panel that, unfortunately, makes him feel a little cheap. His hands are a bit on the large side too, but thankfully their being black reduces the effect greatly.

What’s nice about this mold is how easy to pose it is. He’s well-articulated and his large feet make it easy to balance him in action poses. Since his torso is basically hollow, he’s not very heavy at all, and that makes him super easy to pose.

In terms of weapons, he comes with two cannons that can be attached to his forearms or joined together to form one larger gun. The gears allow the barrels to spin together when they’re joined together, which is a nifty little effect. I prefer them attached to his forearms because it looks like he’s wielding twin Gatling guns. And their positioning here makes so much sense to me. The G1 Seekers’ null-rays being attached to their upper arms always made me wonder how difficult they must have been to aim. These seem so much more logical. The paint here is applied in a different pattern than it is on Starscream’s cannons, so that helps to differentiate the two further. It’s the same exact mold, but the paint does help to individualize them just that much more.

To my eye, his blue is an exact match to the blue Hasbro used for their Masterpiece Thundercracker last year, only it’s much less “swirly” on this figure, which I do consider to be an improvement. He’s roughly the same size as the IDW Megatron — an idea I’m slowly warming up to. I’d prefer him to be just a touch smaller than Megatron, but I’ll learn to live with this, I’m sure. And even though they’re closer to the same size in the comics, I like how he looks with the IDW legends-class Bumblebee. Their size difference seems appropriate to me given what their respective alt modes are, and this pairing is how Thundercracker will be displayed on my shelves (it makes sense of you’ve read the comics). 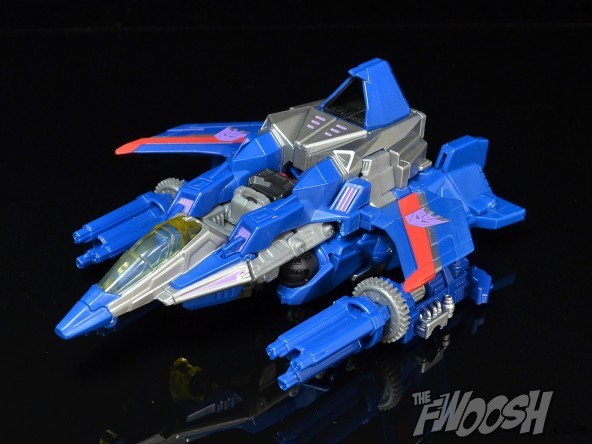 I have to say that I am a fan of the alt mode. It looks like it could be a nice update of the tetrajet design from the G1 days. It retains a sort of triangular shape, but it’s more elaborate in design and looks downright formidable with the cannons attached.

The only drawback to this design is his head — it’s barely concealed right behind the cockpit. You just turn it around and lay it down and — presto! — it’s all nice and hidden away. Sort of. Well, not really. You really have to pretend you don’t see it in order for this mode to be truly successful in its transformation. Fortunately, his ‘bot mode has no such short falls (apart from the hollow torso, that is), so at least there’s one mode where this mold is truly effective.

Thundercracker is part of the second wave of deluxe-class IDW figures, so he’s only just started to pop up at retail. Seeing as how he’s a simple repaint, though, he probably won’t be too hard to find once distribution becomes more widespread. Starscream was fairly easy to find and that wave saw fairly miserable distribution (at least in my neck of the woods), so hopefully everyone who wants a Thundercracker will be able to find one without too much effort; however, if old-fashioned toy-hunting isn’t your game, BigBadToySore would be more than happy to send him straight to your door in exchange for, you know, money. Either way, pick him up!