The suit was uncomfortable. And it itched. He was used to Eternian steel on his breast and a sturdy helmet on his head, and this suit had none of those comforts. And the colors… he had grown fond of the Royal Court’s green and orange and had once believed that if his blood were to spill and if his life were to be given in duty to the Royal family, then the red of his blood would fall on those colors and those alone. Not purple and yellow.

John Spector walked down a hall he had grown so fond of in his life that he could take the steps blindfolded. The throne room awaited him. He held a mask limply in his left hand, almost as an afterthought. He wasn’t prepared to acknowledge it just yet. To go into battle with his face covered… it felt ill-fitting. He would feel more like a thief in the night than a true warrior of the palace.

He wondered if King Randor would ever have asked him to wear such a thing. But it was a different time now and a different King. The old ways were changing.

He tugged at his suit of purple. He adjusted and fidgeted with it, but it still wouldn’t feel right. It was amazing how the pounds of steel he had worn in his duties as a Guard of the House of Randor felt lighter than this suit.

A pair of those guards stood outside the throne room. They did not acknowledge his presence. They did not meet his eyes. He was no longer their leader. He was something else now. Or would be.

He pushed the throne room doors open and all eyes were suddenly on him.

This was both familiar and unfamiliar. There the Queen once sat, looking with kind eyes. Otherworldly eyes, though she had been more Eternian in her soul than many who lived and died on this world. And there once sat King Randor, whose eyes were both hard and soft in his love for his world and his people. Another in a long line of warrior kings.

But those days were gone. In their place a new King sat. John immediately took a knee. “Your Grace,”

“Please, rise,” King Adam said. Clamp champ stood solemnly to his left. The queen’s throne was empty. “A man about to take such a duty on himself has no need to kneel.” 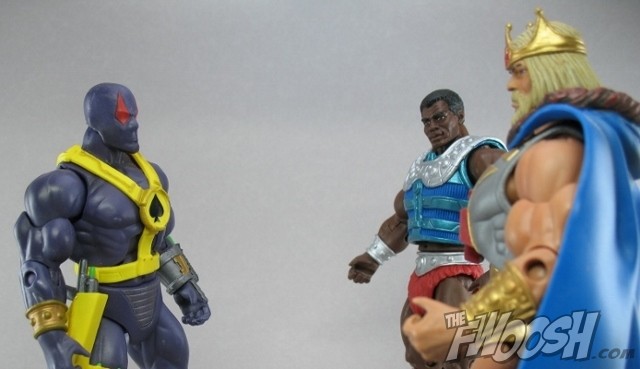 “I am a servant of the throne of Eternia, My King.”

“You are a friend, John. A friend to this Palace, a friend to me as both a man and as a king. This does not change, and I do not ask this task of you lightly.”

John Spector smiled. “As I say, I am as always a servant of the throne. And a friend to you. All you needed was to ask.”

King Adam laid a hand on his old friend’s shoulder. “If you are ready then. I do not know if Zodac will show or…”

“No, I am here,” Zodac said, materializing beside them both. Both John and the King started. 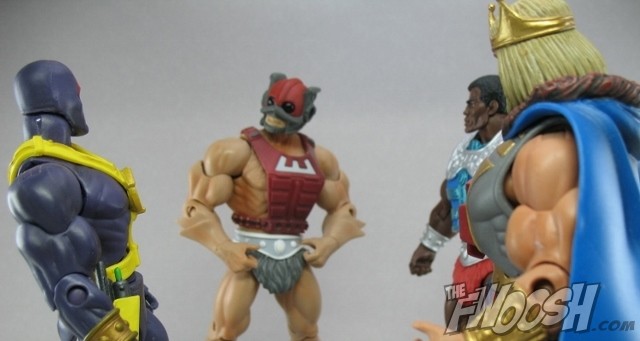 Clamp Champ let out a brusque chuckle. “You men should be more observant,” he said. “I sensed him five minutes ago.”

Zodac appraised John. Those blank, glassy orbs seemed to pry beneath his suit of purple and inspect his inner workings. John had nothing to hide. Zodac nodded. “He is ready. His spirit is in balance, his mind is strong. I will guide him as needed.”

“That won’t be necessary, mighty Zodac.”

Zodac tilted his head. “You will be the mighty one after the day is over, John Spector.”

The King turned to Clamp Champ, who handed him the Cosmic Key with a quiet reverence. Adam turned with it back to John and met his eyes. “There will be no backing down.”

“For Eternia,” John Spector said, and slid the mask on.

King He-man played a succession of notes on the Cosmic Key. There began a soft humming, and the prongs at the end of the key began to shift and vibrate and unlatch themselves.

Clamp Champ walked over and fastened a miniature version of the same key to John’s left wrist. It began to pick up the sympathetic vibrations of the larger key. King Adam played the notes again. John Spector felt the key on his wrist mimic them and tune itself to the notes the larger key played. “The keys are aligning,” he said, always enigmatic, always veiled. John felt the urge to tear at his mask. His skin felt warm.

The notes on the larger key and the notes on the smaller key began to ring in unison. King Adam held the key closer, and the vibration between the two of them shrieked. He believed his nose was bleeding.

Voices to his left. He turned. Queen Marlena in the corner, with a baby. King Randor stood over them both. “He has your eyes,” Marlena said to her king.

“And she has yours,” Randor said, and lifted his daughter as the queen tickled her son.

He saw Teela storm into the throne room, blaring a warning. “Skeletor’s attacking — you must get to cover!”
John started to move, but she faded and the scene shifted. Skeletor sat upon the throne, torturing King Randor with a casual wave of his finger. To John’s right, He-man ran his sword into Skeletor’s chest. A ghost passed through his body, a ghost in green and orange. “Listen to reason, Randor!” The man screamed,  and the King turned, face red over his beard. “Do not forget your place,” King Randor barked, and Duncan ground his fist. Randor wore a horde insignia on his battle armor.

He felt hands on him, restraining him, but he didn’t know if they were real or more phantoms. “Chronal flashes. Footprints in time. For most they wash away. For him they are all too real. He has to learn to separate what was and will be from what never was and never will be. He has to ground himself.”

John saw Zodac’s probing black orbs and wondered if this was happening now or before, and to somebody else.

“Focus,” Zodac said. “Separate the noise or you’ll lose yourself.” John watched Hordak obliterate the queen and king in front of a shackled He-Man. He saw Keldor upon the throne. He saw She-Ra slice Skeletor’s head from his shoulders, only to be run through by a snake wearing He-Man’s clothes. Next the throne room itself had been transformed into a cold thing where snakes slithered in the darkness and a demon sat on a throne of skulls. King Adam was speaking to him, but this already happened, this was the past, this was not now, because you can’t remember something that was happening currently. “Horde Prime’s tampering with space and time has resulted in fissures, John. We need a warrior that we can trust to take care of the rips in the timestream.”

“But why me?” the John of then asked.

“Because your service to the throne has never wavered. I know I can trust you with this.” John Spector closed his eyes behind the mask. He focused on the darkness. Visions still swam  past him and through him, a nightmare collage of everything infinite eventuality. The Cosmic Key had opened him to the rigors of an untapped universe, and he needed to grit his teeth and master it before it mastered him.

John looked for the source of those words, the ones that had been repeating in his ear overtop the noise and rabble of the chronal flashes. He searched all around for them.

He saw a masked face. Purple, with red diamond eyes.

“Don’t do it,” he said, and pulled off the mask. John saw himself. The eyes were wide and pleading.

He closed his eyes again.

When next he opened his eyes, the visions had receded, and the phantoms were less noticeable. They were still there, but they were ghosts of ghosts, like faded memories. He found with effort he could pluck what was real and now from what was possible and not.

King Adam was essentially holding him upright. John got his legs under him and nodded. “I am… I will be fine. The key has bonded.” He looked at the smaller key on his wrist. It hummed softly. He felt it tingle up to his elbow.

Zodac nodded. “Broken in places, but he is mending. Time is flowing through him, not around him. The stream now does not affect him as it affects mortals. You will not age. Time is now your plaything. It is… a lonely world you have entered,” Zodac said, and disappeared.

“Are you all right my friend?” King Adam asked.

Spector looked at the King, and then at the hazy chronal phantoms that shifted all around him. One in particular he gravitated towards. A man clad in a purple suit who wore a shattered Cosmic Key on his wrist. There was blood on the purple.  He was pleading with John. Though he could not hear his words, they still rung in his memory. “Don’t do it. Don’t do it.” But it was too late.

There was no indication if it was a vision of something that will happen, had happened, or might happen.

John was no longer certain if there was any difference between the three anymore.

The Queen and the Sorceress

And check out these other Fwoosh Masters of the Universe Stories with peerless pictures by fellow Fwoosher Matthew K:

As always discuss on the Fwoosh Forums!