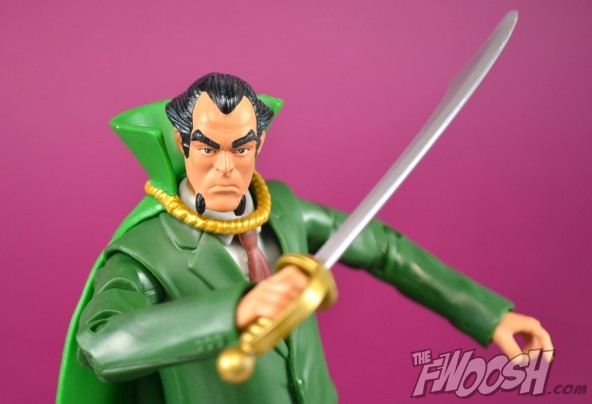 As we count down to the end of the year, and now the end of the line, for the DC Club Infinite Earths, we are left with a bit of an eclectic lineup in the fourth quarter. Ocean Master arrives in October as an oft-requested Aquaman foil, and surprise-pick Batzarro will be the last figure offered for the line in December. Sandwiched between those two comes a figure that is requisite “gimme” due to his importance and long-overdue status in the line: Ra’s al Ghul. Most certainly Batman’s most popular and powerful adversary never to have had a figure in the DCUC line, the Demon’s Head will help many collectors breathe a sigh relief and that this essential character slid past the door as it is now quickly shutting on the DCIE club.

I have to admit, of all of the figures that have been released this year in the club, I am the most surprised by the fact that we have had to wait this long for Ra’s. Like I said, he is a popular character made even more popular by the Nolan Batman movies, and, well, he is an extremely inexpensive figure to produce. I have not been kidding myself about this one, and even though I would have preferred the riding pants and jackboots version of Ra’s costume, I was pretty certain from the outset that we would be seeing the basic suit reuse for the figure. As you saw at SDCC, that is exactly what we got, so if you have issue with that body, or you are just tired of seeing it, your acceptance of this final figure will vary. Personally, I really don’t have any issues with the suit body, and I don’t think it is overused any more than any other DCUC body; I just don’t think it is the most exciting costume choice in the world.

From neck to foot, Ra’s has a lot of green, and, admittedly, this is probably his most well-known comic look. The costume is serviceable, and if you are reading this, I am sure you know that suit body well, so you know pretty much exactly what to expect. His suit is a lighter yellow-green and his new high-collared cape is more of an emerald green to set it off from the rest of the outfit. I like the cape; it hangs naturally and the collar is not overly large so it fits well proportionally. It is attached to his back and is not removable, so if you are looking for good basic suit fodder, Ra’s might not be your best bet.

Since he was unveiled at SDCC, the hot topic of discussion surrounding Mr. al Ghul has been his head sculpt. Needless to say, many in the online community have expressed their disdain about the look and likeness of the figure, but I can tell you that, for better or for worse, what we saw at SDCC was pretty much final compared to this figure, so what you saw in July is what you will get in November. I am a little split on the head sculpt myself. I don’t really mind it, but I do see the argument that it doesn’t really look much like Ra’s and that the detailing is a little soft when compared to other DCUC/IE sculpts. It is strange — the sculpt doesn’t have any of the hallmarks that are associated with Four Horsemen sculpts, like a square jaw and a well-defined brow.

Since Chris Dahlberg (amicably) left the company, I am sure that put the crunch on the rest of the team, and I think I have gotten really good at identifying Eric Treadaway’s work, so it looks to me like maybe the “5th Horseman” or someone else did the head sculpt. I am speculating as I have no concrete assurance one way or another, but Ra’s just looks a little different to me. Actually, he looks more like late actor Jerry Orbach than anyone, but that might just be me. Like always, how much you like the sculpt will depend entirely on you.

Finally, Ra’s comes with a single accessory: his trusty scimitar sword. This has become pretty synonymous with the character, so I could not have imagined him NOT coming with it. The sculpt is good, but I cannot help but think that maybe the sword itself is a touch too big. The handle certainly seems large to me as you can tell that the figure’s grip is strained to hold the sword, but it still looks good as he wields it. For me, getting a sword with a figure is just daring me to put the figure in as many fighting poses as possible, but with the some of the more limited joints of the suit body, you will not be able to convincingly achieve more than a few fighting stances. 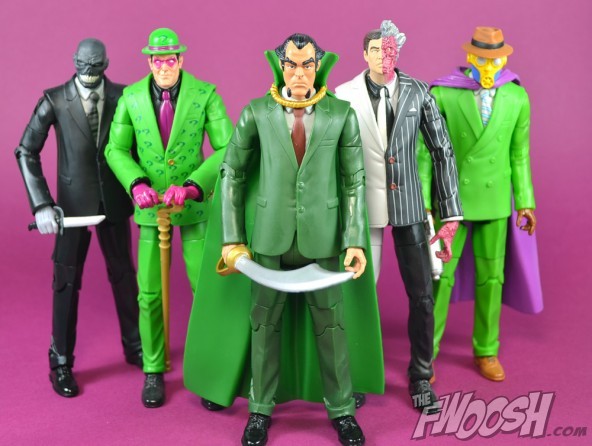 Overall, I am glad that we finally got our Ra’s al Ghul figure as he has been needed for a long time. As the sun sets on the Club Infinite Earths, I can only the imagine the backlash around not getting this figure at all. That being said, he is not the most exciting figure in the world to me and I think he will be lost in the fray a bit amongst the likes of Huntress, Ocean Master, and Batzarro. His head sculpt will continue to be subject to debate, but everything else with the figure turned out pretty much as expected. The end of the line is finishing with at pretty strong Batman flavor, and Ra’s is an integral part of that. He will be available at Matty Collector on Novemeber 15th.

*Thanks again to Toy Guru and team for sending along this little Demon’s head. He has been a long time coming so you are now free to sigh with a touch of relief.