Doctor Who was famously cancelled in 1989 after 26 years as a staple of British television, but the series had been on virtual life support throughout much of the ’80s as the greater world of science fiction seemingly left it in the dust. In a “post-Star Wars” landscape of big-budget space epics being churned out year after year, Doctor Who, in comparison, seemed positively hokey and depressingly low-budget. It became difficult to watch, and, I’ll be honest, I didn’t stick around for long once Tom Baker bid the series a fond adieu. And evidently I wasn’t alone. Even now, if you want to watch the adventures of the 7th Doctor, it’s not that easy a thing to do. There is only one story available on Netflix, and just two up on Amazon Prime, so it would seem the powers that be aren’t all that interested in making post-Tom Baker and pre-Christopher Eccleston episodes all that readily “available.”

Sylvester McCoy had the dubious honor of playing the Doctor as the series said goodbye to television in 1989. This wasn’t the end of the Doctor, of course. His adventures continued as a series of novels until he returned to our television sets for a one-off movie in 1996, but in 1989, for all practical purposes, the TV series bit the dust under Sylvester McCoy’s watch. 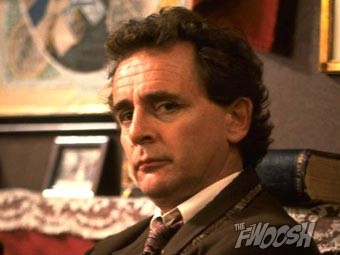 None of this was really McCoy’s fault, of course, but it is easy and tempting to blame him. The series was simply a victim of its time. It hadn’t kept pace with the technological advances that people like Spielberg and Lucas had introduced to the science fiction world, so what may have been charming in the mid-’70s became positively crappy by the mid-’80s. The show just seemed to tread water with uninspired sets, stagnant film techniques, and just what seemed to be very low production values. There was no way it was going to last the way it was going. And, well, it didn’t. 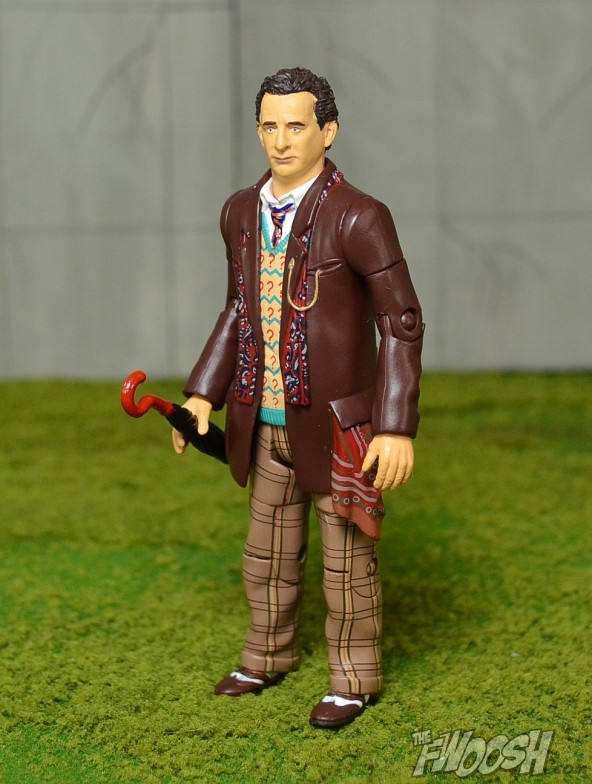 McCoy’s Doctor was a curious one, and he was one of the few that I disliked at first sight. It was the getup, mainly. He reminded me of some weird cross between the Penguin and the Riddler. He looked so gaudy, and he lacked all the panache Tom Baker and John Pertwee had imbued the character with. The 7th Doctor was a dork, and as I was entering my teenage years, it was difficult to see this dork as someone very inspiring. Luke Skywalker had pretty much taken that baton and ran the heck away with it. But, as is often the case, my first impression of this Doctor was off the mark, and he actually is quite an interesting take on the character. I wouldn’t learn this until years and years later, of course, but better late than never, right?

While the 7th Doctor’s appearance may have resembled someone’s goofy uncle who you didn’t really want to talk about, this Doctor actually evolved into a deeper, darker character than we’ve seen before or since. He was a bit dorky when his tenure began (which was probably by design, really), but he slowly transformed into a scheming, manipulative character whose personality was in direct contrast with his appearance. The 10th Doctor even refers back to this version of himself when he tells Wilfred he “got worse; tricked people into taking their own lives.” That’s pretty freakin’ dark. Needless to say, this makes me want to go through the trouble of hunting down some more episodes that feature this version of the Doctor because I’m hoping they’ll win me over even more. I want to like this Doctor and the seasons in which he existed, but every time I try to watch, I have difficulty getting into them. I still hold a bias or two against the ’80s Doctors that is difficult to shake. 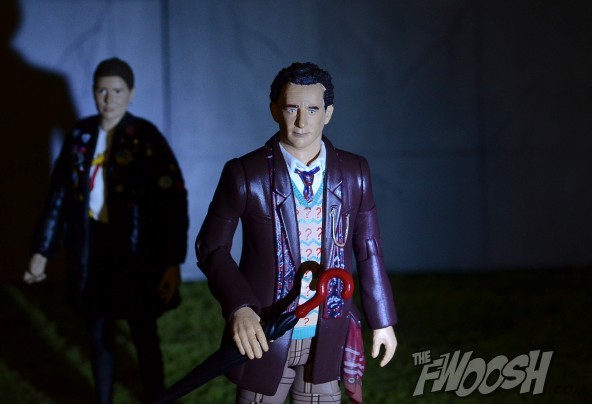 Because he’s not my favorite version of the Doctor, this is the only representative figure I’ve felt I need to own. This is the version that was included in the 11-Doctor box set, and it basically hits all the necessary notes, although for it to be considered truly “definitive,” it would need to come with the 7th Doctor’s signature hat. The lack of a hat is almost enough to make me want to track down another figure, but then I manage to talk myself out of it as I buy yet another Tom Baker Doctor instead. So it goes. 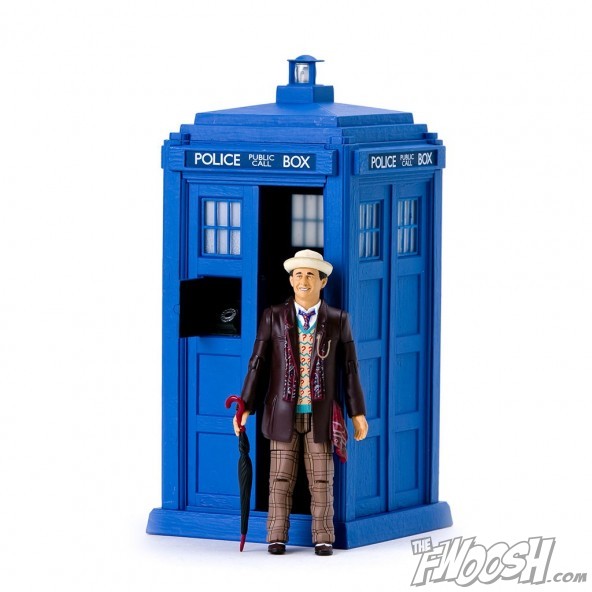 Pictured above is the set that includes the 7th Doctor’s TARDIS and a Doctor figure that is basically the same as the one featured here, but with a different head that features his hat. The prospect of hunting this down is tempting, but I just can’t muster enough interest to throw down the $50+ it’ll likely cost me. If I didn’t already own four different versions of the TARDIS, this would probably be an easier decision to make, so while the hat-head would be kinda cool to have, I think I’ll be able to live with just the version I have. 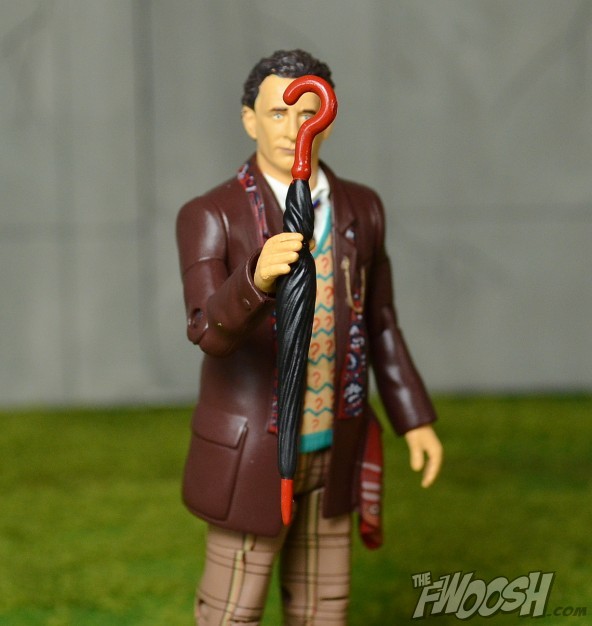 Instead of a sonic screwdriver, he comes with an umbrella. When he’s holding it, all I can think of is “Penguin.” I can’t help it. It’s just too engrained in my psyche. And the fact that the handle is shaped like a question mark then makes me think “Riddler.” This figure pulls my emotions in too many different directions. 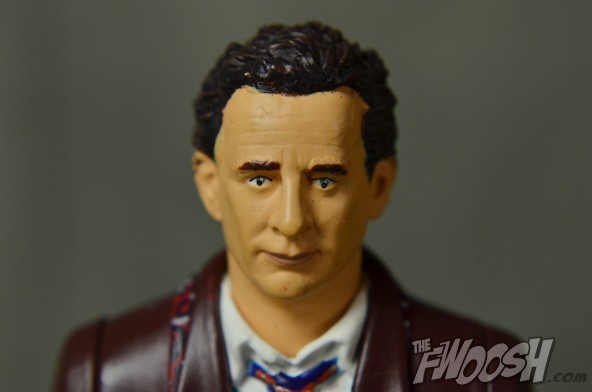 The figure does a decent job of capturing McCoy’s likeness. The sculpt is tight and realistic, right down to the lines in his forehead. It’s actually a pretty great sculpt with really sharp paint apps. The details on his sweater, tie, and scarf are exceptionally vivid. 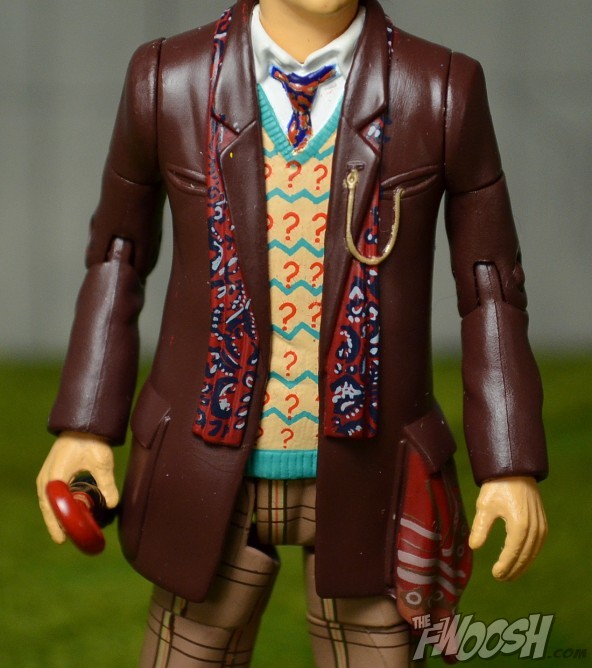 A lot of care clearly went into producing this figure, and the attention to detail is kind of staggering. He’s definitely a handsome figure, which is good because he really hasn’t got much going for him in the “action figure” department. 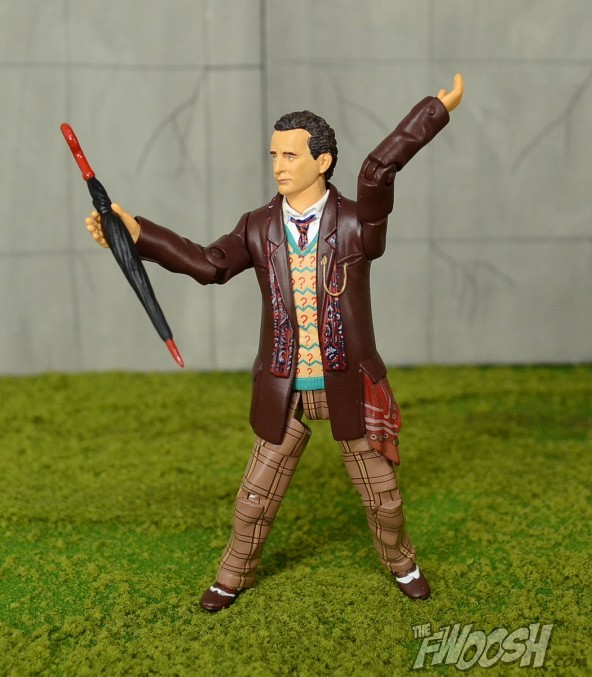 This is about the extent of his posing abilities and as dramatic an action pose as he’s capable of pulling off. His coat hinders his leg movement a great deal, his shoulders only have a swivel movement, he has no ankle articulation, no ab crunch, etc. It’s basically as bare-bones an articulation scheme as you can get away with these days. He’s clearly meant to be kept in a vanilla pose on the shelf.

His best-known companion is probably Ace, a rebellious girl straight from 1980s Britain. She was literally just released, so the 7th Doctor doesn’t have to be all alone on the shelf anymore. The addition of Ace to the classic collection suddenly makes the 7th Doctor feel more legitimate somehow. 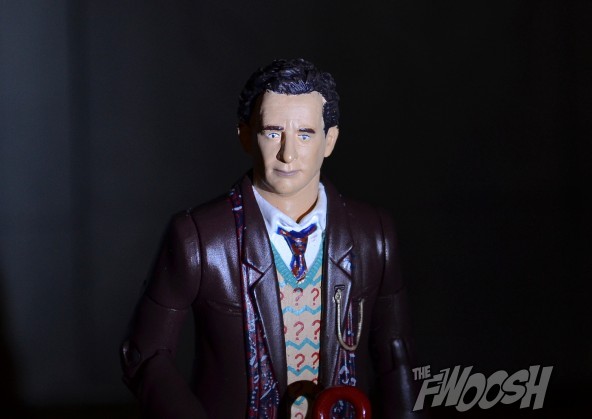 I have to admit, the prospect of writing about Sylvester McCoy’s Doctor was not a task I was looking forward to doing; however, in the process of putting this all together, I’ve actually grown quite fond of this figure. The level of detail is something I never appreciated until I was forced to observe it up close, and now I’m truly impressed with this figure. I initially only bought him out of an OCD compulsion to own at least one version of every Doctor, but now I’m genuinely interested in him as a character. I’m going to have to hunt down more episodes beyond the paltry few Netflix and Amazon have available.

If you’re interested in picking up a 7th Doctor, they can usually be had fairly inexpensively on eBay. I paid around $4 for this one loose, so deals can definitely be had.