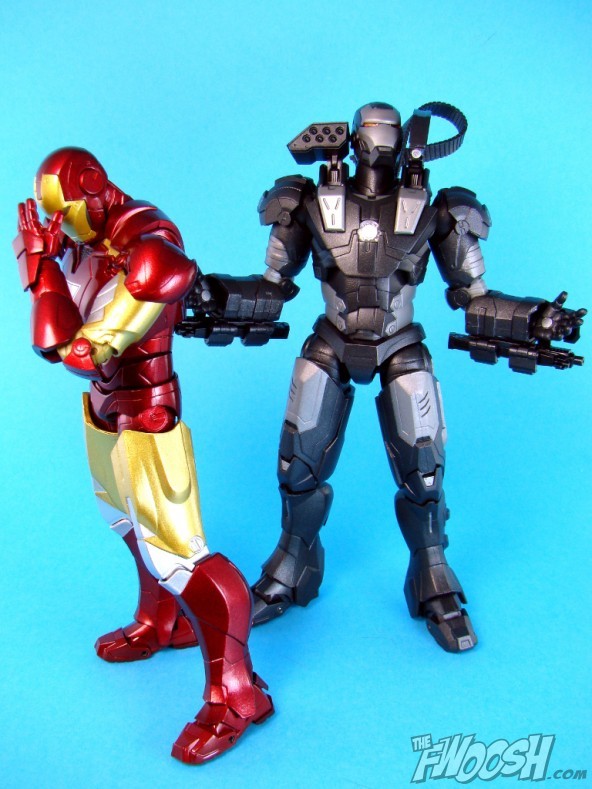 I love the scene in Iron Man 2 when Rhodey (War Machine) shoots out the widow maker and it fails, and Tony makes a jab at Hammer Tech. Brilliant.

Brilliant, which is very similar to this toy from S.H. Figuarts. Along with the MK6, Bandai released War Machine and the two figures make a fantastic pair. This figure is 1/12, or 6-inch scale, and stands a little taller than the MK6. It is close in scale to the undersized Hasbro War Machine, and is in scale with most of the Hasbro comic armors. Yes, most collectors will say that these are undersized, and I do agree, but they are in scale with each other. I prefer that they were around six and a half inches tall and not the six inches they are today.

Where Bandai’s MK6 fails, this one succeeds. There is no flattened helmet nor flattened back. This figure is good, round, and thick. I’m pretty enamored with this figure and its die-cast feet. Yeah, you heard me, die-cast feet, just like on the MK7. This is a very good feature since this figure has some top-heavyness to it and we don’t want the figure to easily fall over. Plus, the plastic feels like it might not survive a shelf dive or two. The feet add good weight supporting the figure tenfold.

The sculpt on this figure is really nice, like nice nice. Most of the nice has to do with the armor design being big and clunky and fun to look at. In a good sculptor’s hands, a figure like this becomes a chance to stretch their skills and go to town on all the panel lines and details. And for a painter, it’s a challenge to bring the sculpt to life. Bandai’s design group hit this out of the park! It’s a beautiful figure to roll over in your hands; it’s an amazing amount of eye candy to enjoy.

The articulation is the exact same as the MK7 — tons and tons of posing fun! I have not tried any type of advanced crouching, but I don’t see War Machine getting into a lot of crouching positions. The articulation breakdown is as follows:

There’s a lot of fun to be had with this figure. There are ton of extras (not including the long repulsor blasts pictured that belong to the MK6). I’m partial to the gun blasts — they make this figure pop and add some fun action posing and play value to the figure. I know that Bandai is releasing some special effects for some other figures in the near future that might be fun to use for these Iron Man 2 figures.

There are hatches on the back of the calves that are removable and are used to cover the jets located there; they do have hinged joints so they can move up and down. There are also “propped”-open hatches that can be switched with the movable hatches. This prevents the oh-so-embarrassing problem of having your jet hatches fall on the repulsor blasts in mid-flight. In addition, there are hatches on the back revealing another set of jets.

The figure comes with the back-mounted Gatling gun and a band of ammo. The ammo band is more flexible than Hasbro’s and allows for more movement and posing. The armature that holds the gun is stiff, and I worry that it might break with extended use or too much pressure. The gun and armature are removable.

There are two additional guns on the forearms; these can be removed if you want to remove them.

This is another fun War Machine figure and another fun figure from S.H. Figuarts. You can still pick him up at:

And you can discuss this further on the: