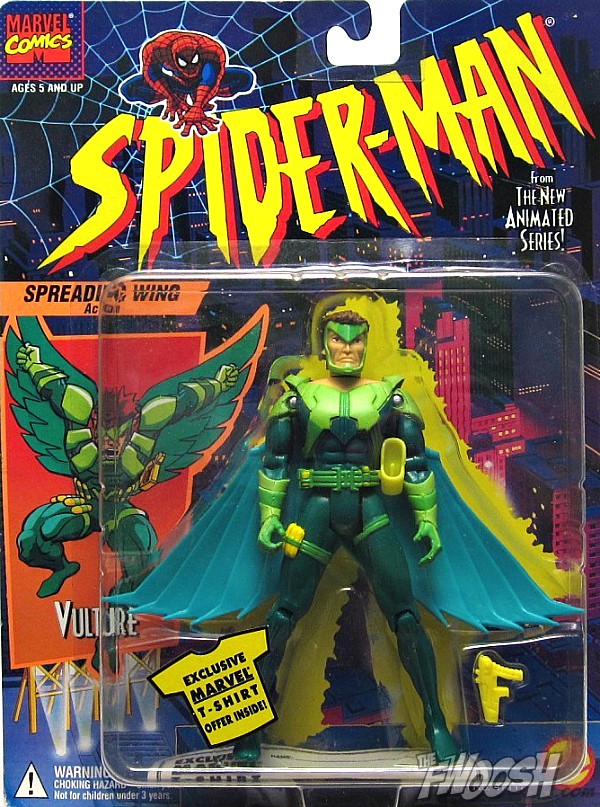 Old guys. If you’re a teen superhero, then they’re the bane of your existence. They drive slow, smell funny, and they’re always trying to kill you. Look at Spider-Man — half his Rogues Gallery were AARP members! From the fit-at-50 club (Doctor Octopus, Kingpin) to the so-old-they-fart-dust category (Spencer Smythe, Mendel Strom, Silvermane) Spidey just can’t seem to get along with the Greatest Generation. The crustiest of these curmudgeons is undoubtedly the Vulture. This ornery octogenarian has been yelling at Spidey to keep off his lawn for over 50 years now: give the guy an action figure and get him out of here, he’s making the young people uncomfortable… 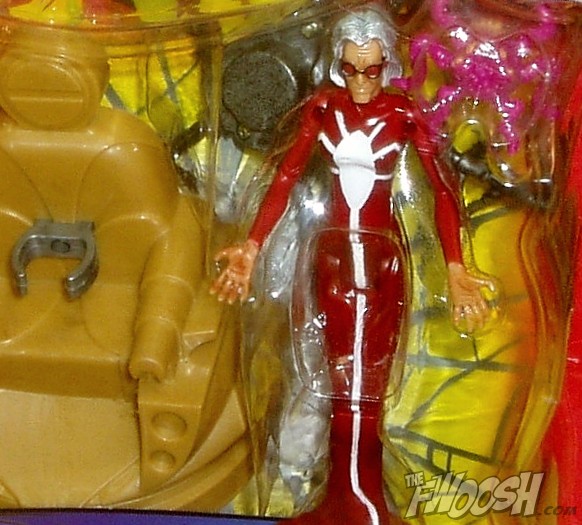 Is Madame Web Spidey’s Prof. X? Both characters are old, confined to wheelchairs, and possess strange metal powers, so it’s easy to make the comparison. Madame Web was featured in both the comics and the 1994 Spider-Man animated series and is pretty interesting from a visual standpoint. Her creepy blood-red “Morticia gown” and opaque lens give the figure a presence and intensity that allows her to hold her own next to vampires, symbiotes, and irate newspaper publishers. Besides, can you ever have enough hot chicks in a toy-line? I say nay. 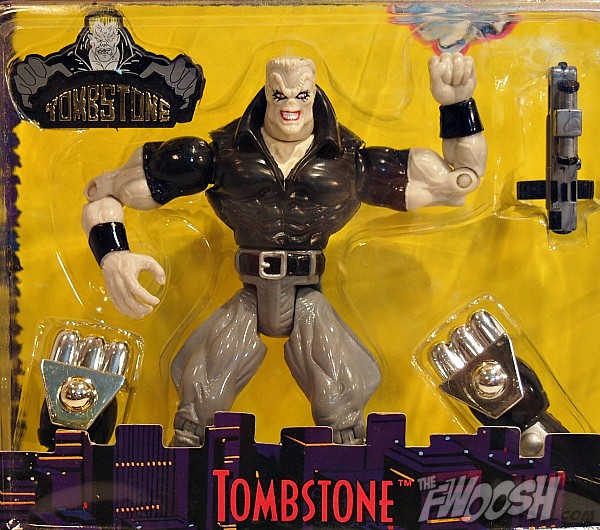 While Tombstone looks less like a supervillain and more like a bouncer in one of those “ladies only” bars, he nonetheless fit the bill for the general street-level gangster types Web-Head was routinely forced to scrap with in the 1990s. This albino Frankenstein-looking gangster with pointy teeth would make a nice addition to any villains shelf. Tombstone, you just need to lose the jodhpurs, find yourself a shirt that fits, and use some mascara that doesn’t run when you cry. Believe me, he is not worth it, girl. 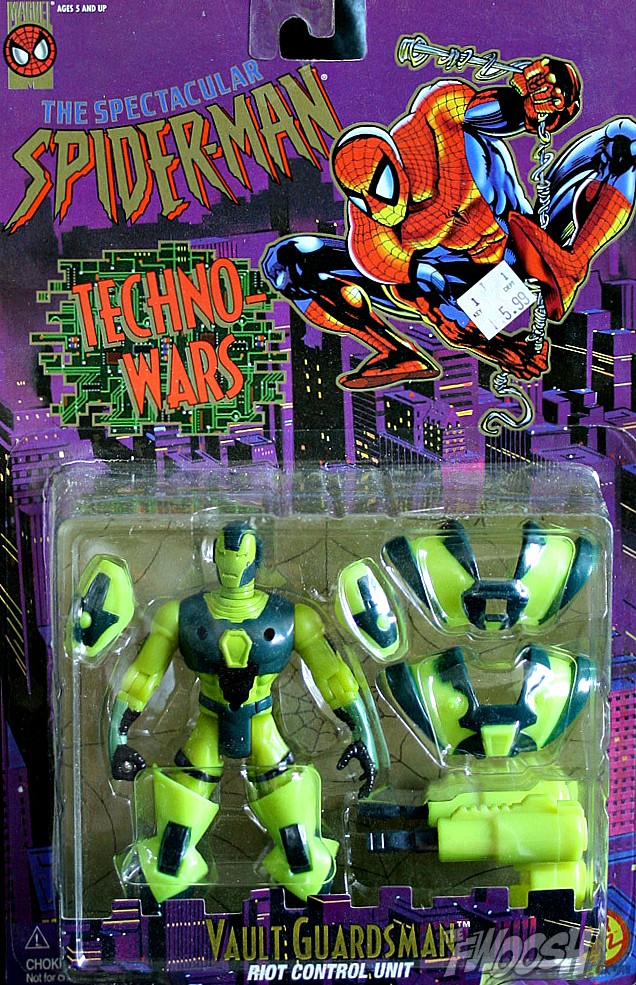 In 1994, the X Men and Spidey were forced to share both Saturday morning and peg-space with two new Marvel properties. Unlike the older cartoons, The Fantastic Four and Iron Man never really caught on and both shows quietly ended after their second seasons. Their respective toy-lines were cancelled and cannibalized, with Iron Man’s unproduced wave 5 was repurposed for the Spider-Man line. Issued as “Techno Wars,” it featured the usual goofy off-model Web-Heads, but the real star was Lava-Armor Iron Man, slumming it as “The Vault Guardsman.” Never mind the fact the Guardsman never looked anything like this and that Toy Biz didn’t even bother to resculpt his head! Collectors would be all over a Marvel Legends-sized, comic-accurate version of Guardsman like sunnies on jerk-bait. He’s both a new character and an army builder, which translates into easy $$$ for Hasbro. Lets make it happen. 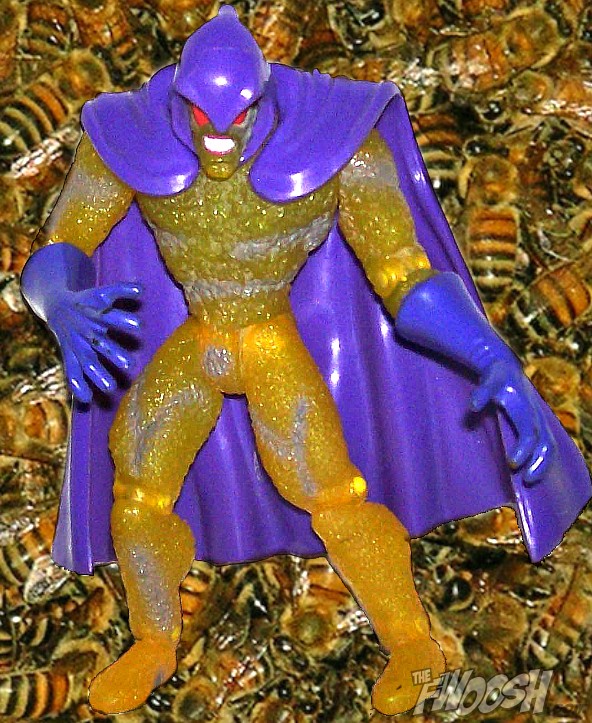 Swarm is a supervillain made entirely of bees. That’s right — where you and I have bodies made up of complex skeletal, muscular, and circulatory systems, he has bees. When we possess hearts, lungs, and brains, he has more bees. It would be stupid if it wasn’t so brilliant. Seriously, ever try and punch a cloud of bees? Spidey has, much to his embarrassment. These days he doesn’t bother trying to fight Swarm, and is instead content to wait until colony-collapse disorder takes care of the guy for him. In your face, nature! 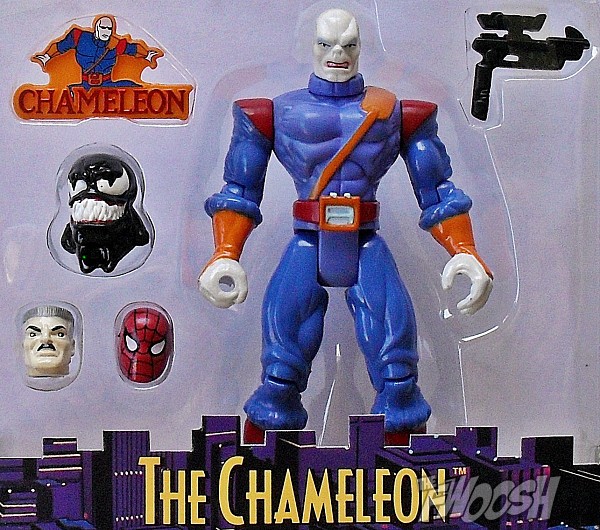 Chameleon has been conspicuously absent from the 6-inch scale… or maybe he’s been on our shelves all along in disguise! How else do you explain the fact that we still don’t have Spidey’s oldest foe? I talked quite a bit about Chameleon and his need for a 6-inch figure in a previous article, and I stand by every word of it. We need Spidey’s oldest foe STAT. 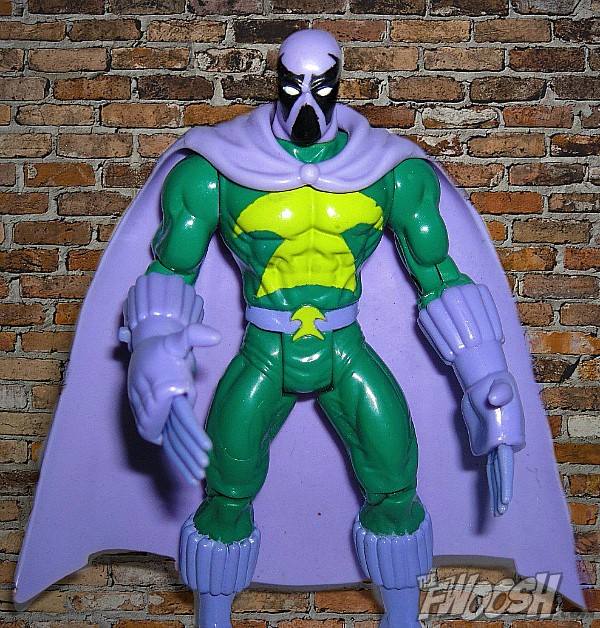 Purple and green — it’s a classic color combination and a consistent part of comic history. Joining the Joker, Lex Luthor, Hulk, and Mysterio is the Bronx’s own Hobie Brown. A window-washer by trade, Hobie used his considerable ingenuity and engineering skills to design a costume that increased his strength, speed, and climbing ability. An encounter with Spider-Man convinced the young inventor to use his suit for good and not crime as he’d originally intended. Calling himself the Prowler, he has become both a friend and valued ally to Spider-Man. His figure looked great back in 1994 and an update is sorely needed. 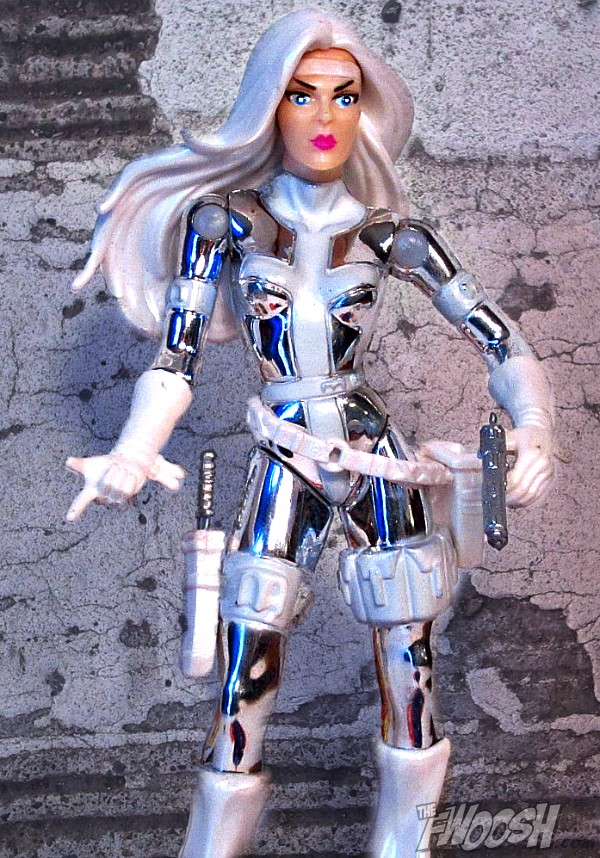 Spidey’s ex-employer made a pretty swanky figure. Issued as part of the “Bug Busters” wave, Silver Sable ended up being one of the nicer characters issued in the line. By wave 17 the series’ blocky animated aesthetic was being replaced by more a more dynamic and stylized look, moving past the weak shoulders and boxy t-crotches of previous offerings. While the vac-metal is obviously dated, this figure’s overall look would still translate nicely to Marvel Legends. If Hasbro were to issue Sable on the new curvier female body, fans will be buying these by the carload. 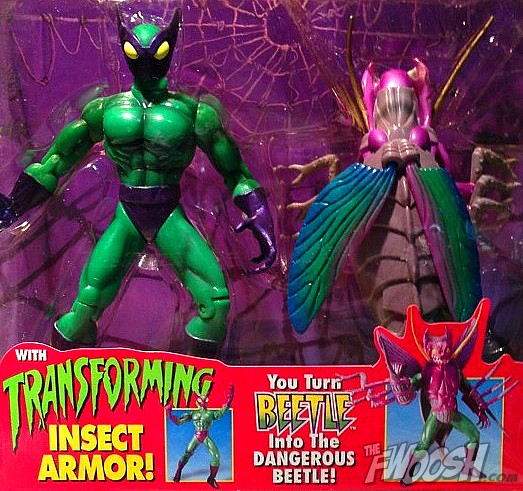 Forget that red-and silver eyesore — meet the Beetle! As in classic, son. Hasbro can keep the crappy insect armor; just get us Beetle is in his iconic duds, wings and all, and things will be fine. 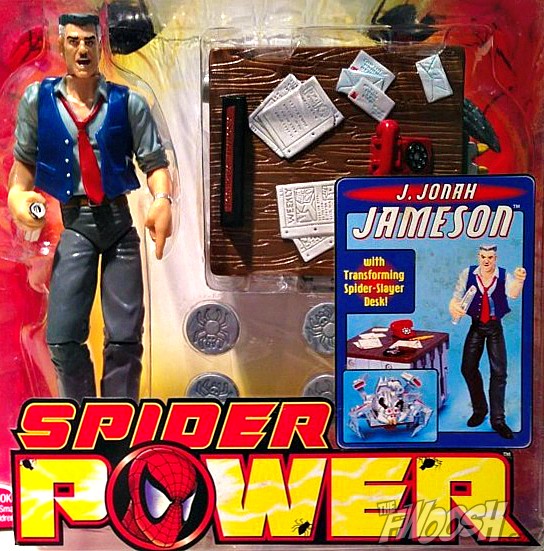 What, did you think I was going to choose Spider-Man? Seriously? I think Spidey is well taken care of in the action figure department, thank you. Jameson, on the other hand, is long overdue the Marvel Legends treatment. After all, he’s been there since the beginning. Good or ill, he’s a huge part of the Spider-Man mythos: from shaping public opinion with his newspaper The Daily Bugle to paying vast sums of money to deranged scientists to help him kill that blasted wall-crawler, JJJ has been a key player in some of the greatest stories of the past 50 years. If that doesn’t deserve a figure, then I’ll eat my hat. Better yet — I’ll eat his hat.