My good friend Craig recently posted some online photos of a project he’s been working on. I was so blown away by his talent, dedication and general toy chi that I had to share his work & insight with the Fwoosh. Without further ado, here’s Craig to tell you about… 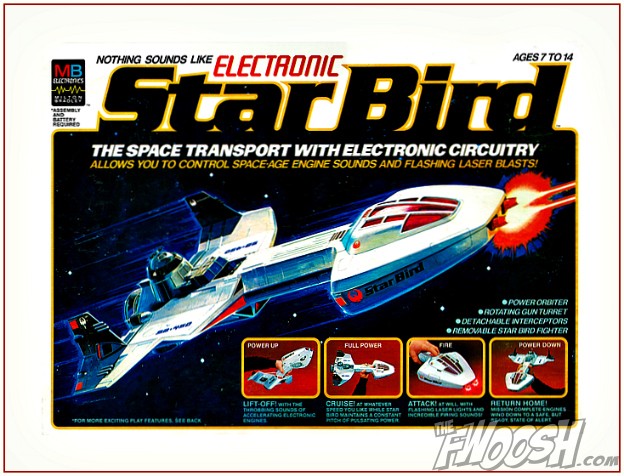 My love for the StarBird goes back to the year 1979. That year, my best friend received one as a Christmas gift. I remember it clearly because it was the first time I ever felt envious of someone else’s possession. I was a huge science fiction fan; Star Wars had rocked me to the core two years earlier and Star Trek (my favorite television show by far) had just premiered its first film on the big screen.

The StarBird embodied the best design elements from both those venerable film franchises. Its overall shape was similar to the Y-Wing, one of the rebel fighter ships in Star Wars, but it had the clean, elegant lines of a Starfleet vessel from Star Trek.  It was sleek and graceful, yet powerful looking, and it had the most amazing features of any toy of its time; when you turned it on and pointed the nose skyward, the engine noise increased in frequency (and volume, according to my friend’s mother). Pointing the nose back toward the ground dropped the frequency until the engines idled in a neutral thrum. Pressing a small button just behind the front windows unleashed a volley of “laser fire” from the LED-lighted forward guns. The StarBird, along with other toys like the space knight, ROM, and the Big Trak, were some of the first to use integrated electronic circuit boards to enhance playability. It was also one of the first “transforming” toys. By disconnecting the front cabin and engine from the main body, and separating the wings and central gun turret, the StarBird could become four different, smaller fighters. 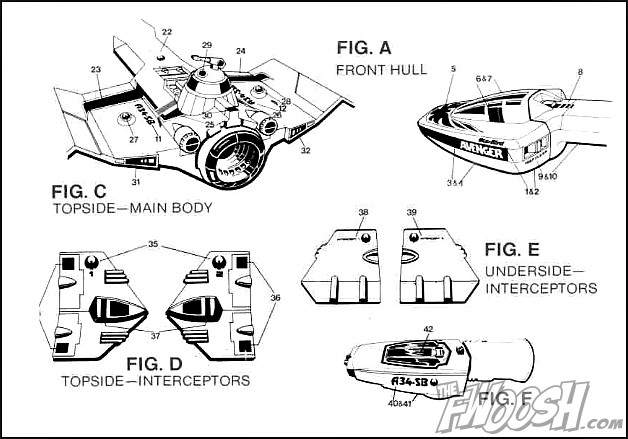 To a 12-year-old boy who dreamed of interstellar adventures the StarBird was THE perfect toy. My friend and I spent many blissful hours letting the StarBird take us to far off worlds. With the other toys in the line, the souped-up “Avenger,” the evil “Intruder,” and the Command Base playset, we were able to build an entire imaginary universe where we were stalwart, heroic StarBird pilots, the “Top Guns” of the spaceways.

But as it is with most people, as I got older I stopped playing with toys. The StarBird stuck with me, though. By this time I owned one myself, and even though it wasn’t used as a toy anymore I enjoyed having it displayed on my shelf. I spent a lot of time studying its shape. The elegance and inherent realism of its design stayed with me. I wondered what it might look like if the StarBird were, in fact, a real ship. How big would it be? What were its capabilities? What would a ship like this be used for? These questions remained with me as I graduated high school and went off to college. If you were to look through my college notebooks, you’d find sketches of the StarBird in the margins of many pages, along with quick scribbles about its range, power, utilities, etc. 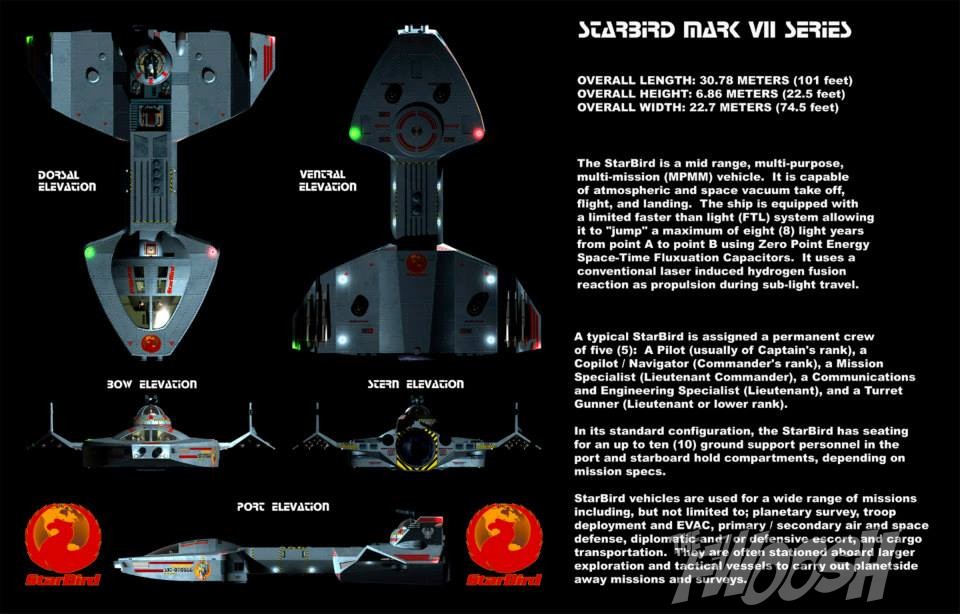 Life continued.  I graduated from college, got married, went to graduate school, got a job, bought a house, got a better job, lost it, found another. All the while the StarBird went with me, on display somewhere nearby and always in the back of my mind, waiting for the day when I might find a way to bring it to life. 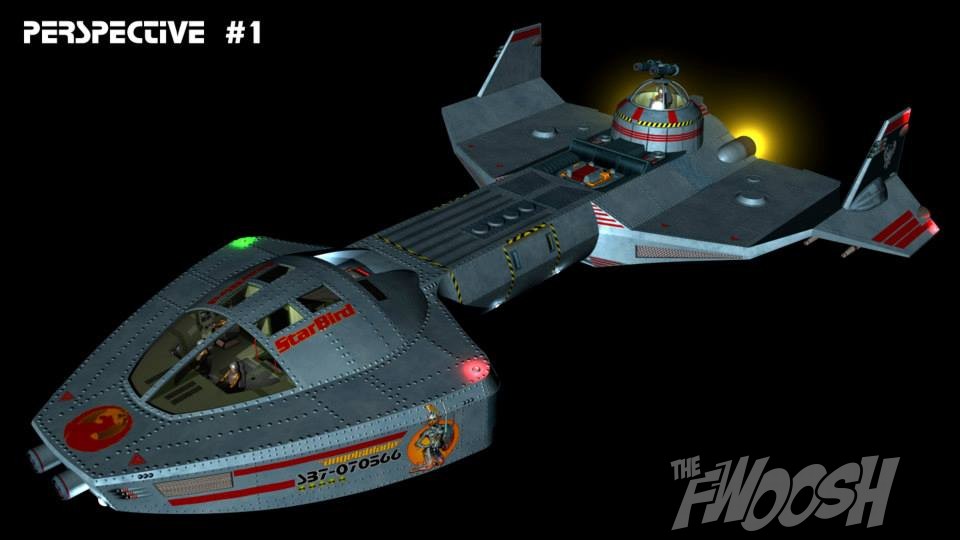 That day seemed to come when I bought my first computer. It came prepackaged with a simple photo-manipulation program, an offshoot of PhotoShop. After spending some time fooling around distorting family photos, I started my first real project: a set of complete plans and specifications for the StarBird. I began by taking pictures of the toy and scanning them into the computer. I then meticulously traced over the photos to create a set of blueprints. After completing those, I set to work designing an interior.

Now, here I should mention that my friend (the one I had those wonderful StarBird-based adventures with as a boy) and I were never in agreement as to the “real” size of the ship. He maintained that it was huge (1000 feet long) and staffed with a crew of 150 people. I thought the ship was smaller, about the same length as the real NASA space shuttle, with a crew of six to eight. The bone of contention in these arguments was the Interceptors that formed the toy’s upper wings. My friend felt they would be piloted by fighter crews so they had to be big enough for people to actually fit inside them. My response was that they could be robot craft remote controlled from inside the main ship. We never settled the disagreement, but it never really got in the way of our playtime anyway. 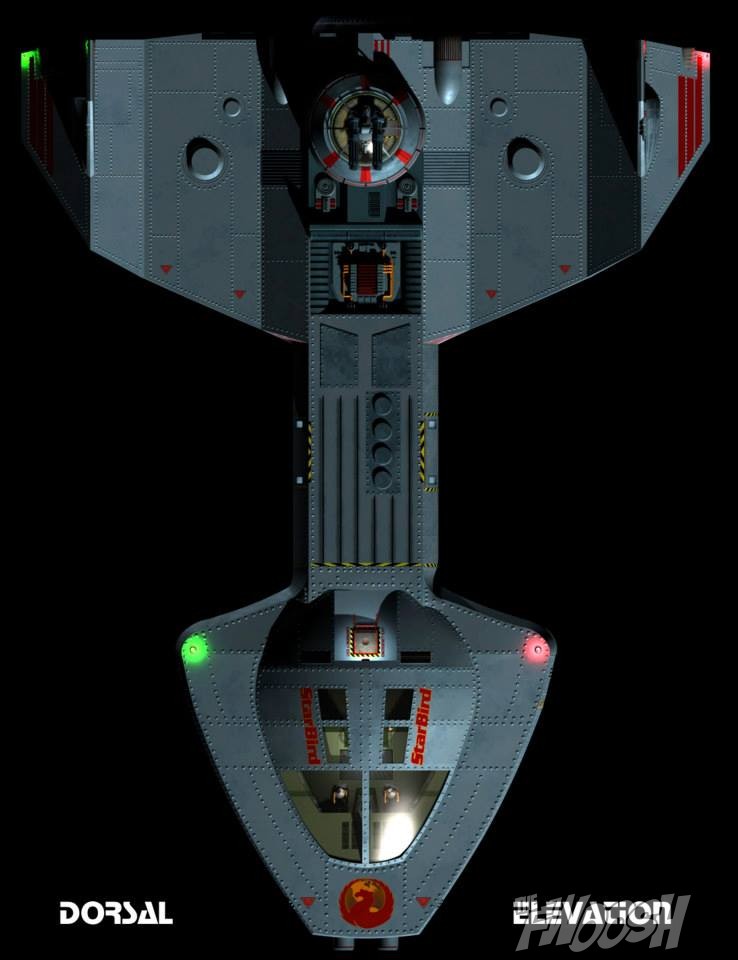 As I prepared to create an interior for this ship for the first time, I had to make a decision.  Would the StarBird be as big as the U.S.S. Enterprise from Star Trek or a smaller, more functional craft?  I opted to make it smaller; not to spite my friend, but because more than anything else I wanted the StarBird to be something that you could reach out and touch if it were real, a spacecraft you might find on display at some futuristic air show, one you could walk around and see the rivets holding the hull panels together.  Something about which any pilot who saw one would say “Man, I’d give anything to fly that baby!” 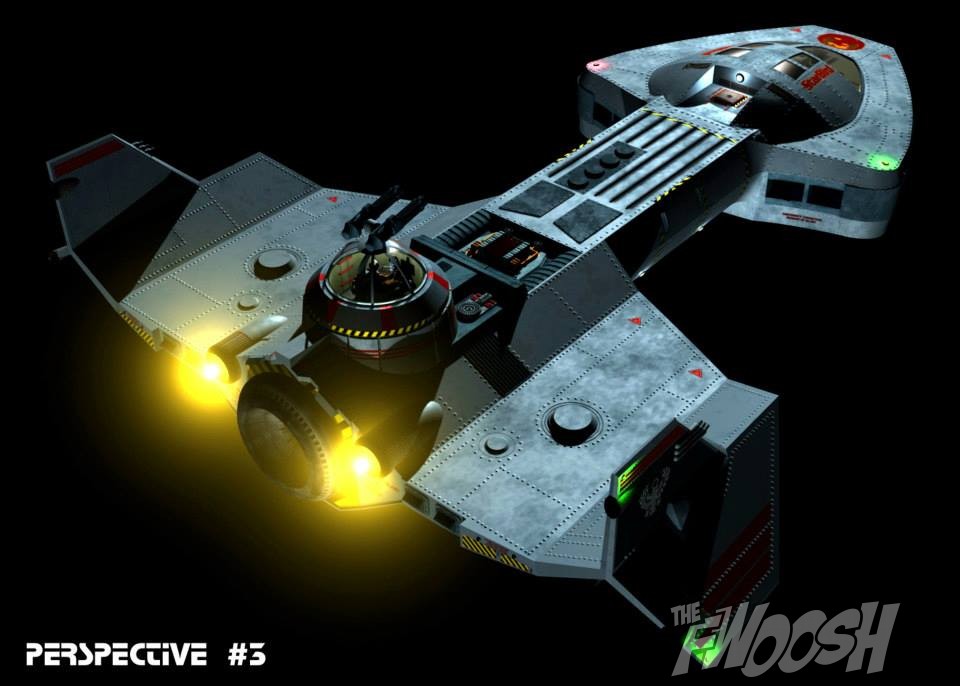 So I designed the interior to hold (at the time) a crew of four (pilot, engineer, turret gunner, and mission specialist), plus seating for up to ten ground troops.  I finished all of the schematics and was very happy with my work.  By this time I was in my 30s and I felt I had finally given the StarBird some kind of tangible reality to complement the imagination the toy had sparked within me as a child.  In my mind, it was now as real as it was ever going to get. 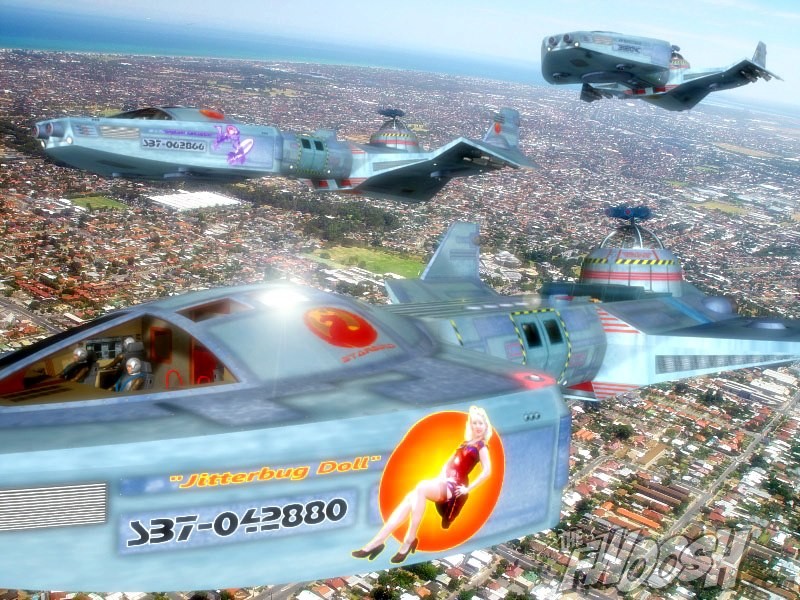 Even though I thought I’d satisfied the decades-long hold the StarBird had over me when I designed those blueprints, the Fates had other ideas.  Years later, a friend installed the computer program 3D Studio Max onto my computer.  With it, I was able to build and render extremely realistic images of various CG objects, everything from simple boxes and spheres to entire spaceships.  As I taught myself the basics of the program, one thought kept pushing me forward…. 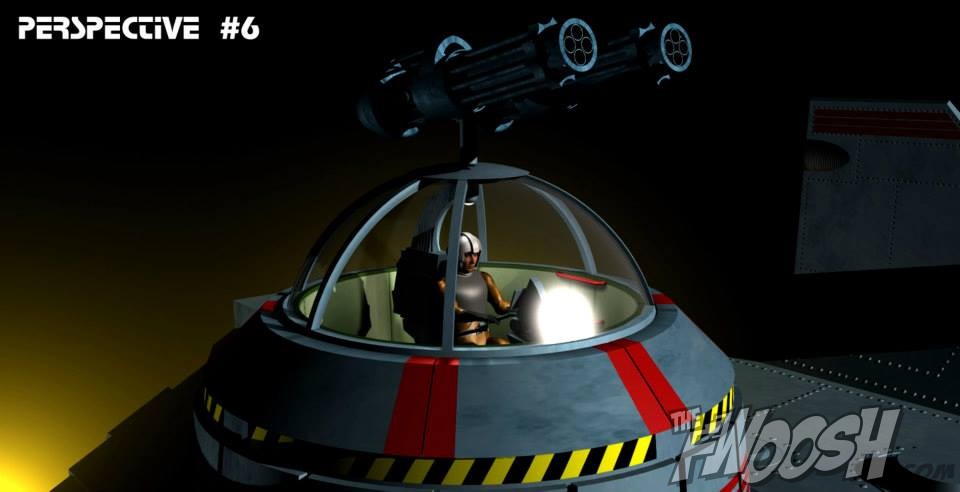 And that’s precisely what I did.  In the years since my friend introduced me to 3D Studio Max, I built seven versions of the ship, each more detailed and refined than the one before it.  In fact, it’s fair to say that the StarBird has helped me learn more about the impressive capabilities of 3D Studio Max than any other CG model in my library.  My proficiency with 3D Studio Max owes a great deal to my desire to do the StarBird justice, to make it as real as possible, to bring the ship to life.  And since it was also possible to animate and render CGI videos, I could finally show others what until then I’d seen only in my imagination; just how beautiful the StarBird is in flight. 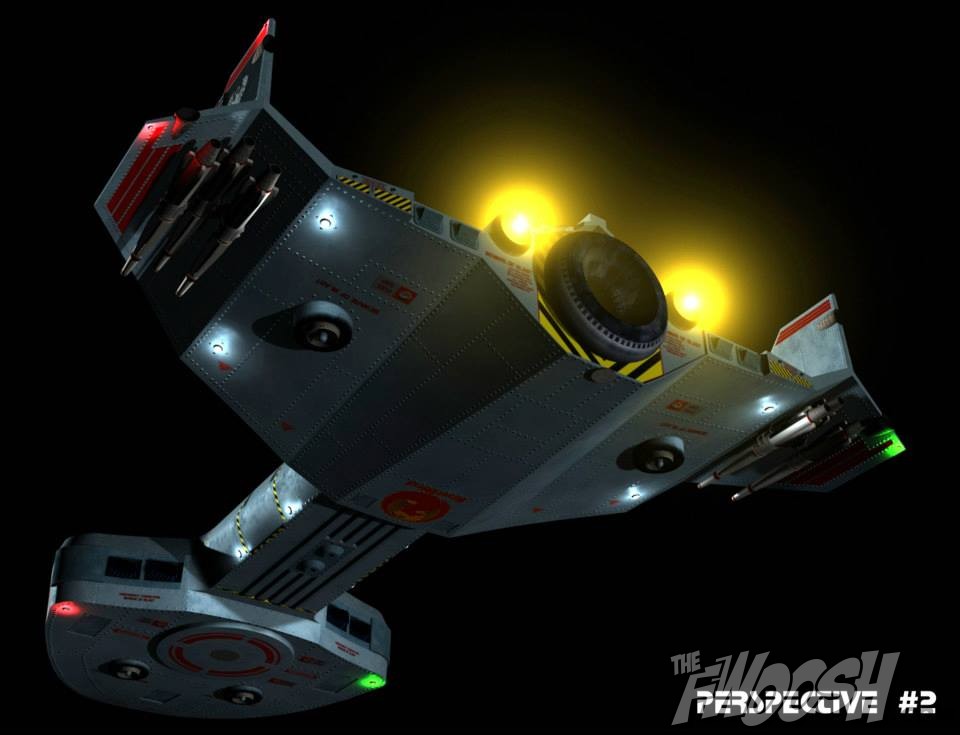 In 2006, I posted the first of my StarBird CGI videos on YouTube.  Titled “StarBird: Evolution,” it was a compilation of exterior-to-interior fly-throughs I’d rendered of StarBirds Mark III, IV, V, and VI (my earlier CG versions of the ship).  I was stunned by the response the video received.  Several viewers wrote comments extolling their own love for the original toy and how much joy it brought them in their youth.  They all enjoyed seeing the ship brought to life and the video brought back many happy memories.  I even heard from a gentleman by the name of Bing McCoy, the man who designed the StarBird toys for the Milton Bradley Company.  The greatest compliment I received, though, came from one YouTube viewer who sent me this message:

I’m 40, and I just watched your vid again, after your comment response.  I’m sitting here watching this feeling 11 again.  I see the Tiburon (love the name, I have a shark thing as well) thinking they are coming home from an interstellar mission; the passengers are stellar Marines, taking a hop home on one of the thousands of StarBirds.  Why do I have this urge to go play with my StarBird, and pull the little blonde girl’s pony tail who sits in front of me in school?  Ha ha!
That’s great man, really.  I enjoy the video quite a bit, and your choice of music is great. I just want to see those laser cannons fire …
Thanks for a few minutes of child-like joy!
Found my StarBird in its original box and it still works, too.  I just let my kid play with it.

Since 2006, I’ve uploaded three other StarBird videos to YouTube:

Each video has received comments from people with fond memories of this amazing toy.  That’s why I love the StarBird, and why I’ve never been able to shake it from my mind.  Years ago, it had the power to make kids feel like they were on some amazing, grown-up adventure.  Today, it has the power to make grown-ups feel like kids again.  Tell me that’s not a PERFECT toy!

So, in a way, I guess I’m still playing with the StarBird.  The actual toys are on display in my den (I own three, plus the Command Base playset), but the CG model fires my imagination now exactly the same way the toy did when I was a kid.  As a bonus, I get to share the fruits of my imagination with others via my YouTube videos and hear from viewers who still love the toy as much as I do.  Not a bad situation at all, if you ask me.