Welcome to a tag-team review of everyone’s favorite Eternian master-grabber. VeeBee has provided plenty of pictures and Ibentmyman-thing (that’s me) will be giving you the scoop on the undisputed Champion of Clamping.

Clamp Champ was another of those later-year figures that I was unfortunate enough to have never had the chance to buy as the original ’80s line was hurtling towards a decisive end, and because of that, he’s practically a new figure in both concept and form for me as a MotU-loving adult. Clamp Champ never enjoyed the media love that other figures received. He came too late in the line for a spot on He-Man’s cartoon, and there was no way to squeeze him into the She-Ra cartoon in any capacity. So, much like wave-mate bad guys Ninjor and Scareglow and others, he juuust missed out on animated immortality. He did make an appearance in the final issues of the Star Comics Masters of the Universe series; however, in those appearances he’s an older man, as the story itself features time travel. So his most notable appearance — and the one that sort of cemented how I view him — remains in the mini-comic titled “Search for Keldor,” which featured the aforementioned Scareglow and Ninjor. 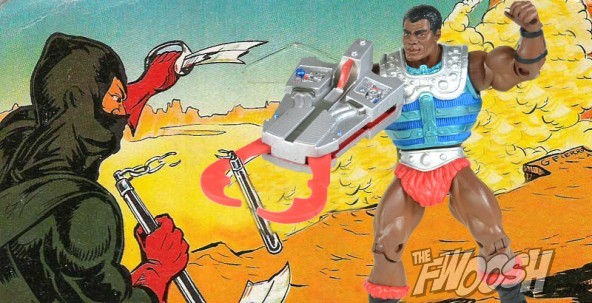 In the comic, he claims to have super-senses, and he has such quick reflexes that he’s able to pluck an arrow from the air and snap it in his fingers. While the “super-senses” thing was no doubt thrown in at the last minute just to give him the ability to do something cool, I like that aspect of him, and it adds to his capacity as Randor’s bodyguard. And since he’s usually toting around a ginormous clamping device, it makes sense for him to be a pretty strong dude. Maybe not in He-Man’s league, but you get the feeling that this is a guy that can handle himself in a fight.

Clamp Champ’s bio is weighted heavily towards his replacing the Snakeman-turned Man-At-Arms, which is a story element I’ve never cared for. While having Clamp Champ eventually promoted to Man-At-Arms after years in service as the King’s bodyguard is fine, Duncan doesn’t have to become a snake for that to happen, so it’s an element I’m choosing to ignore. And I don’t mind the name “Raenius,” for him; it’s decent when sometimes the names are hit-or miss.

Befitting his origins, Clamp Champ utilizes a lot of stock He-Man parts, so the parts that are new really have to shine to keep him nice and perky. His head sculpt is another standout along the lines of Fisto and Jitsu that brings a whole other level of craftsmanship and resonance to the line. While there have been plenty of heads that are well-done updates to the classic figures (and, boy, have we heard the lamentations from those who bemoan this fact), there are a handful of heads that are so rich with detail that they’re like little examples of Facesculpting 101, and I find those are the heads I can pick up and stare at, picking out the details in the line work and creases.

Clamp champ has a determined intensity in his stare. He’s creased and wrinkled enough so that you know he’s no youngster, but there’s a spark behind his eyes so you know he’s not ready for retirement yet. It strikes the right mature balance, so this looks like a guy that Randor will entrust his Queen’s life to.

Clamp Champ’s armor is a fine update to the original figure’s… from the front. There’s a nice pearlescent quality to the turquoise that helps to separate it further from the blue undertone. Despite the coverage of the armor, he has as much forward-and-backward motion as you’d need, and the armor itself is made of a more flexible material, so there’s a little give to it. Not a lot, but enough for some subtle posing distinctions.
The back of the armor is where we run into some problems. It’s where Clamp Champ turns into Bell Fella… or something. I’m not really sure what it is. From what I’ve read, it’s a 200x influence, and I’m assuming it’s meant to be the power source for his techno-clamp. At least that’s what it seems like. But it looks like a bell. A big eyesore of a bell. I don’t know. It’s weird, and I would have been fine if it had been left off. I don’t think there’s been a single “200x”  design element that I’ve felt has added to the figure, and this hasn’t changed my mind yet. Sometimes less is so much more that it comes around the other side and takes over. No more of that please.

Besides his well-done noggin, Clamp’s weapon is the star of the show. It’s a hefty chunk of weapon, and Clampy is clearly a strong guy to drag around this behemoth of a weapon, not to mention use it to… clamp things. The pincers can be (manually) retracted, or swiveled around for full-on clamping action. Eternia is clearly a bad-ass land filled with bad-ass men and women, but there is absolutely no way I’d want to mess around with a dude holding a gigantic bottle opener. That’s some crazy poop.

Having not had him as a kid, I have had a huge amount of fun in my second childhood having Clamp Champ clamp things and then toss them aside.

He also comes with the smaller 200x clamp. I’d have liked this to have had similar articulation so the pincers could clamp together, but it works well enough if you want to have him clamping a head like VeeBee has shown us. As it is, I prefer his oversized BAC, so the little one gets relegated to the accessory drawer. Sorry guys, in Eternia, size matters.

With Clamp Champ, the much-revered vintage collection is edging it’s way closer and closer to completion. While he’s never been the most high-profile of the MotU members and never had a media tie-in to up his status beyond bit-player, his unique gimmick and singular role as the only black member of the vintage toy line make him a  strong addition to Masters of the Universe Classics.

A guy with a big clamp is clearly one of those last minute, late meeting “we need another character in this wave” decisions where one designer looks at another designer who happens to be cracking nuts and wearily blurts out, “What about Clamp Champ?” and everybody agrees it’s brilliant and then they go out and get drunk, but the elegant, simple genius behind such concepts is what inspires great toys. And luckily we have people working on the line now that take what may have at one time been a hastily tossed off name and turn it into a thing of beauty. A little love, a little skill, a little imagination, and you end up with a great toy, and a proud addition to the Universe.