Whether cartoon, comic, movie or television show, Batman isn’t Batman unless he has his villains. Same is true for toy lines, and luckily the Batman television line is delivering the main villains to trouble Adam West’s spandex-clad small-screen Caped Crusader. 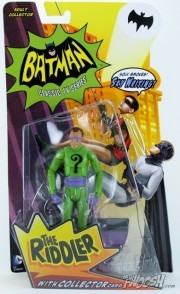 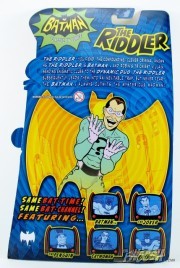 The Riddler, as portrayed by the late Frank Gorshin, was a giggling, capering lunatic in the same type of form-fitting spandex that he wore in the comics. This is not a look for the bashful, and it seemed like Gorshin embraced his role eagerly. It was an iconic enough representation that Jim Carrey eagerly cribbed from it for his performance — or whatever that was — in Batman Forever. 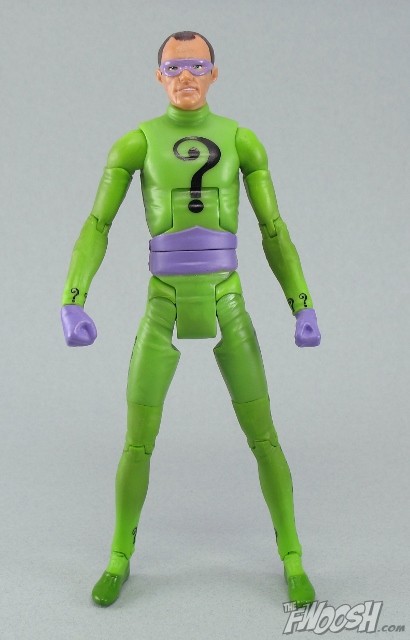 The figure shares his onscreen counterpart’s lithe, limber frame. With yet another brand-new sculpt like all the others, this Riddler is perfectly suited to… capering. I’m assuming you have to go to a special school to learn how to caper just right. But if any figure looked like it could, this one does. 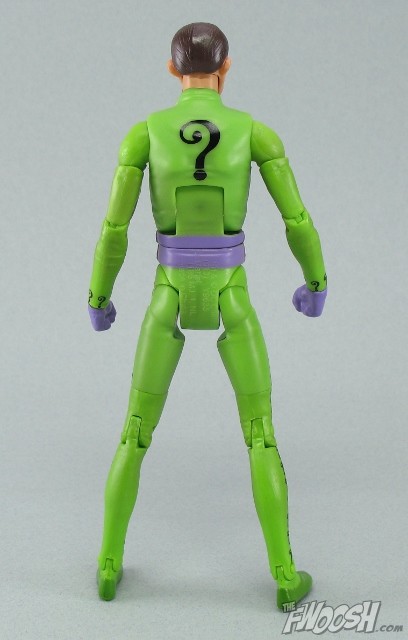 It’s a thin body with plenty of subtle fabric folds sculpted in to replicate the spandexian qualities of the character. It adds an interesting variation to the vast reservoir of available fodder bodies out there for you customizers. This Riddler is scaled more to the Movie Masters scale like the entire line.  I actually like this thinner body for the character a bit more than the medium body that his DCUC figure was released on. I don’t often think of Riddler as a weightlifter, so this thin, practically muscle-free body works even better for his general look than the regular DCUC figure. I think some may have problem with the waist cut that slices right through his belt, but there was no other way to pull that off.

As with the Batman and Robin figures, Riddler features the full complement of DCUC style articulation and it all works well here. Like Batman and Robin, the Riddler has some small feet tucked into his little ballet slippers. It’s a bit jarring, but luckily he’s a bit more evenly proportioned so I didn’t have quite as much trouble getting him to balance as I did with the Dynamic Duo. 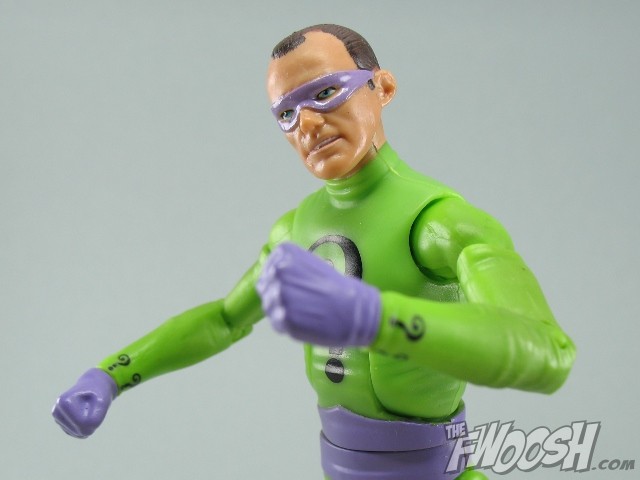 With a line like this, it’s the face sculpts that really have to sell the character. Riddler has a good representation of Gorshin, with his  trademark receding hairline. He’s got a smarmy cockeyed grin that suits him well.  If it’s not dead-on, it’s pretty damn close to me, and it works as well as I need it to. 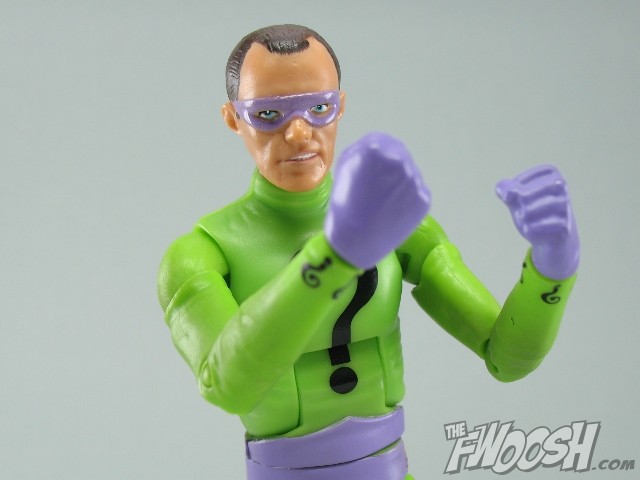 Riddler comes with a standard complement of question marks adorning his body. They’re all nicely applied with no paint problems, and they capture that curly flair. 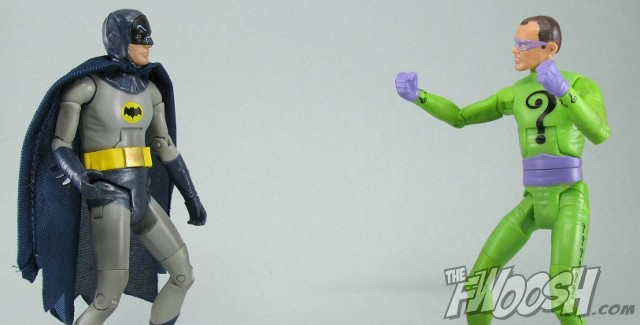 It’s a shame the line is apparently not continuing on because I would have assumed that a second figure of Riddler in his question mark-festooned suit and hat would have been a sure thing in a future wave. Of course, toy fates are fickle, so this line may actually have more legs to it than is apparent now. Matty does like thermometers, after all, so who knows if one day they’ll put a sub up to continue the line. At least the Riddler got his shot, and they got him right the first time.
He’s a well-done figure that will look great with the rest of the line.