There was a touching scene in Rocky when the Penguin, old and frail with his best days behind him, wants to try and bring out Rocky’s potential, so they can team up to defeat Batman.

No, that doesn’t sound quite right… 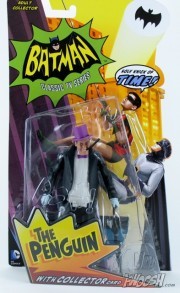 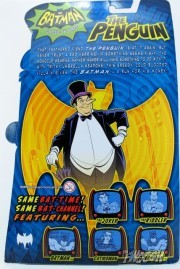 In a contest between Danny DeVito’s Penguin and Burgess Meredith’s portrayal, Burgess wins hands down, just for the fact that I’ll assume he never dribbled black goo. The Penguin is a stylish, classy criminal gentleman whose demeanor stands in contrast to his bizarre stature, and, as such, Burgess Meredith’s purple-hatted, tuxedoed portrayal on the Batman television show fits closer to my idea of the Penguin. His figure features a few surprises, the biggest of which is that he takes front seat as my favorite of the line so far. 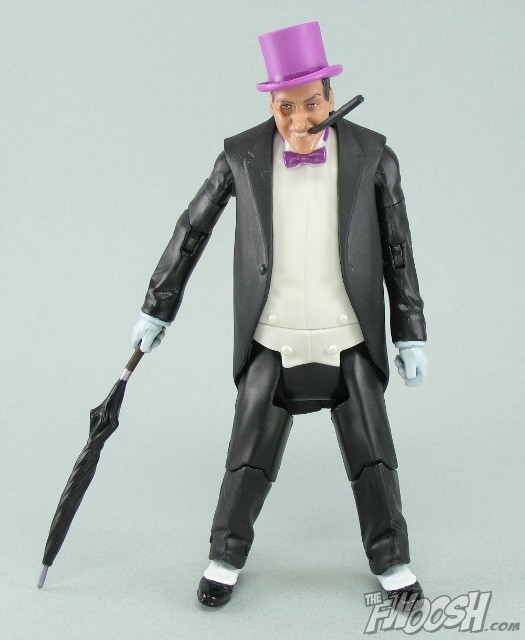 Penguin has less articulation than his wave mates due to his… let’s say “unique” build. While I’m usually an articulation whore as I’ve said before, I will make allowances as Penguin doesn’t strike me as someone who needs to move everywhere. So while he’s missing an ab crunch and thigh swivels, I don’t really miss them. I know, I know, I’m gasping just as hard. His upper arm articulation is a bit blocky, but that’s how they work the suited bodies, so there’s nothing that can be done with it. I’m not really sure why they slice across like that; I know aesthetically it works when his arm is neutral, but it looks off when it’s turned even slightly. 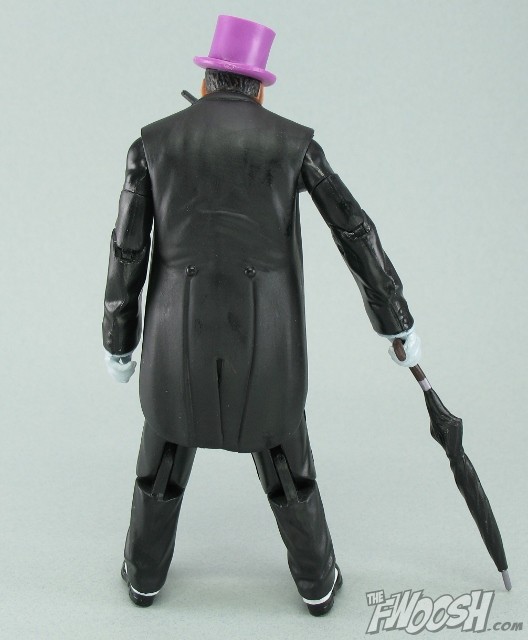 Penguin only comes with one accessory, but when you’re the Penguin you only need one accessory: a nice umbrella. He actually comes with something I wish the DCUC figure had come with, which is a closed umbrella. Not to invoke the dreaded Super Powers line, but that’s something I wanted for the Penguin even way back then. I like the classy elegance of a Penguin holding a closed umbrella. You never know what’s going to come out of it. He looks dapper. And deadly. He can switch up and hold it in either hand, so there are options. Options are fun. Better for Bat-whacking. 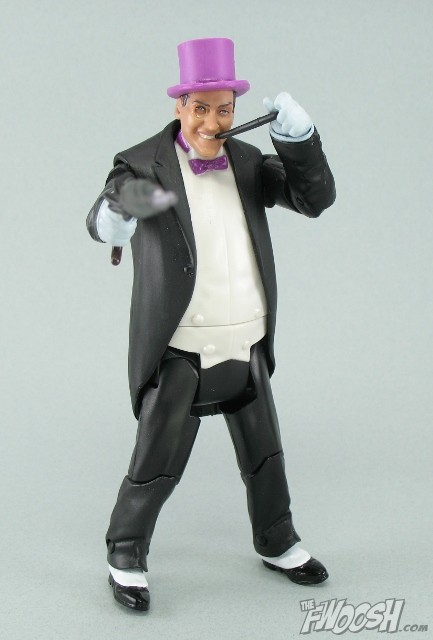 The most surprising thing is the fact that he comes with… a smoking product! Granted, they purposely didn’t paint the cigarette at the end white — at least I’ll assume that was on purpose and not just being cheap with the white paint — but it’s pretty clear that it’s supposed to be his trademark cigarette and holder. That’s part of his “look” so they couldn’t have left it off, but with political correctness being what it is, I’m a little surprised they got away with it in a time when Nick fury, Logan, and the Thing can’t smoke cigars in a comic. Maybe this toy is for adults. Adults collecting toys? Crazy talk. 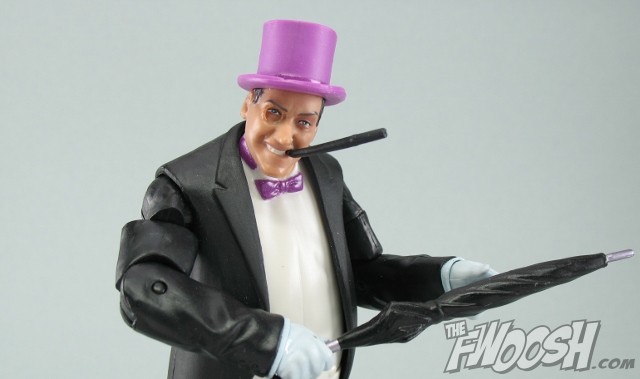 Smoking’s bad for you kids. Stay in school and drink milk or something.

His face sculpt is the best in the line and is dripping with a ton of personality, with his snooty little monocle and his gritted teeth. They’ve really nailed the actor and the essence of the character in these, but this one steps it up a notch. Due to the actor’s portrayal, there was a lot of character to work with in the first place, so it stands to reason that if you could capture even half of that, you’d end up with a winner. He’s got a perfect pompous, smarmy sneer.

Diminished articulation besides, this is yet another standout figure in a very unique line. As the bad guys start to come together, you really appreciate them as a group. Once Joker and Catwoman join them it will be a nice oppositional force for the Dynamic Duo, right from the television screen.