The Batman ’66 series of 6-inch figures has something rarely ever seen in action figure lines of this scale — a vehicle!  Let’s take a look at this iconic ride after the jump.

I was one of those kids who watched the ’66 Batman series and took it completely seriously.  I was enthralled with every episode and wanted to be Batman and Robin.  As an adult, I’ve come to appreciate the show on different levels: the humor, the acting, and the design are all fantastic and great fun to watch.  I just wish someone would put out a DVD of the series. 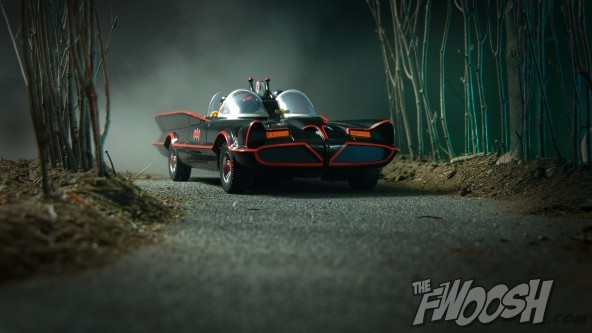 As a fan of the property, I knew I would be buying a ton of the new merchandise once I heard the license was available, and I was glad to hear that they were going to do a 6-inch scaled articulated line — my personal favorite scale. 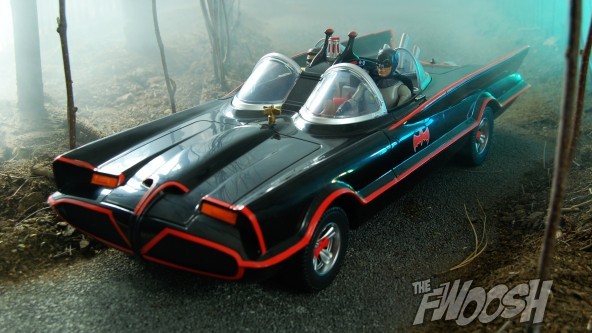 As a child I had a 4-inch scale Batman and Robin figure set with a Batmobile.  I loved that thing and played with it all the time.  It was basically my favorite childhood toy, so a heaping dose of nostalgia is affecting my perspective here.  In fact, I let out a little squeel of joy when I saw this thing at the Entertainment Earth booth at Comic-Con this year.  I had to have it. 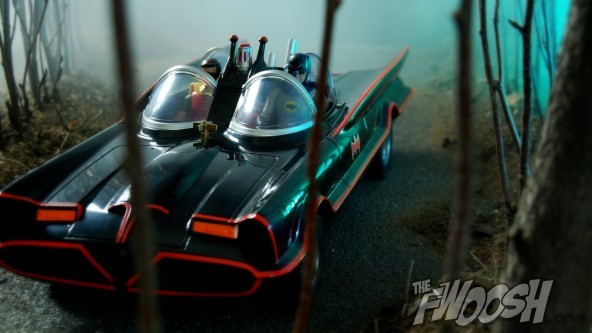 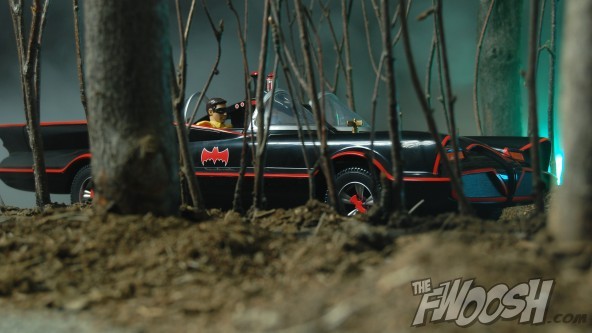 The Batmobile comes in a large window box that shows off the car well.  The graphics have a bold, colorful look that fits with the ’60s aesthetic of the classic show.

The car is light on any sort of action feature.  There are no launching missiles, add on saw blades, or even opening doors, trunk or hood.  The steering wheel turns, but it does not affect the wheels of the car.  Basically, it rolls and looks like the ’66 Batmobile.  There are seat belts that secure the figures into the vehicle by sliding into small slots in the center console.  These are a little fiddly for adult-sized fingers, but serviceable.  Overall, it feels a little bare-bones to me.

The interior has some nicely sculpted details, like the Bat-phone and Bat-fire extinguisher.

The body of the car looks like a Batmobile should, a few quibbles aside.  The fins are nice and sharp (thought they are made from a softer plastic than the rest of the body), the jet engine detail is there, and there is even a really cool little Gotham City license plate.  The main issue I have with the Batmobile is that the windows aren’t quite as crystal clear as I would like.  There is a slight cloudiness to them.

Since this is basically a glorified accessory, it has to look good with the figures of the line, and I think it does for the most part.  Batman and Robin fit nicely into the cockpit, though the metal wires in the capes can interact oddly with the seats and make for some awkward cape neck looks.  I think I was able to get these to look okay eventually, but that’s more of a criticism of the figures than the car itself.

I also think the car is slightly small so I took some measurements to see how in scale it is.  This gets pretty nerdy, so please bear with me.  The Batman figure is 6 inches tall and Adam West is 6’2″.  That puts these figures at pretty close 6inch or 1/12th scale where one foot in real life is equal to one inch in the toy.  I looked up some Barris Batmobile dimensions – the wheelbase is 10.5 feet long in real life and the toy has a wheelbase of about 10 inches.  The length is 18.83 feet in real life and 17.75 inches long on the toy.  The width in real life is 6.5 feet and 6.0 inches on the toy.  I think the measurements bear out my initial impression of slightly smaller than true scale.  That leads to my other criticism of the vehicle, which is that it just doesn’t feel like a solid toy.  It’s very lightweight and feels kind of cheap.  The wheels are just solid plastic with a metal bar between them very similar to the design of the toy from my youth. 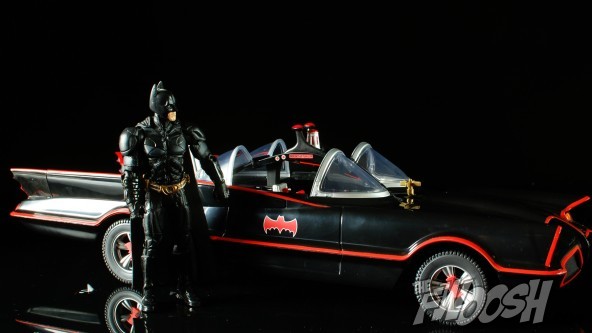 The paint on this is pretty minimal.  It looks like the body is cast in a glossy black plastic and the red details are painted on.  The trim and symbol look really smooth and clean.  My Batmobile came out of the box somewhat dusty and smudged like it was mistreated a bit by the factory before being packed up.  I’m not sure how to polish up the plastic to retain the glossy finish, so any suggestions would be appreciated.

This is a pretty pricey piece at $60 at Toys R Us, so I was a little shocked at how light it was out of the box and how bare bones it was overall.  That said, it really does all I need a Batmobile to do, which is fit the figures and look cool while doing it. 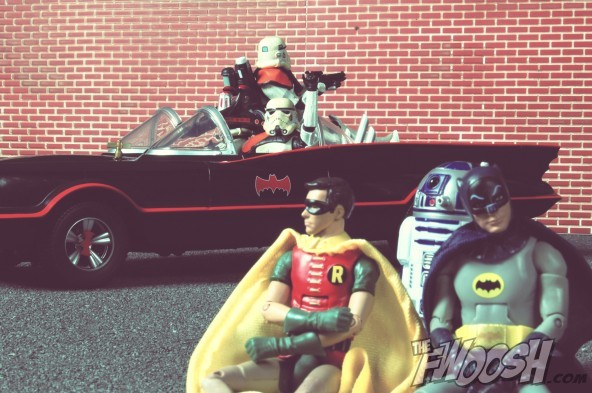