I really don’t know what it was about Soundwave as a character in the old Transformers cartoon, but everyone,  including myself, loved him. He didn’t say or do too much. He really was very stoic and had nothing in way of personality to speak of, but, dammit, people liked him. Pretty sure it had a lot to do with the design of the character himself.  And that sexy deep voice he had.

Dark blue and silver, and a mysterious face hidden behind a face plate — he just had the look of a toy you had to have.  I had a Soundwave back in the day, but to me that figure always left a lot to be desired, even by the standards back then.  His legs were always too loose, he seemed almost two-dimensional because he was so thin, and he could only fit one cassette minion at a time (while I wanted to shove ’em all in there).  Well, Hasbro sure has fixed almost all of that with their recently released Masterpiece version. 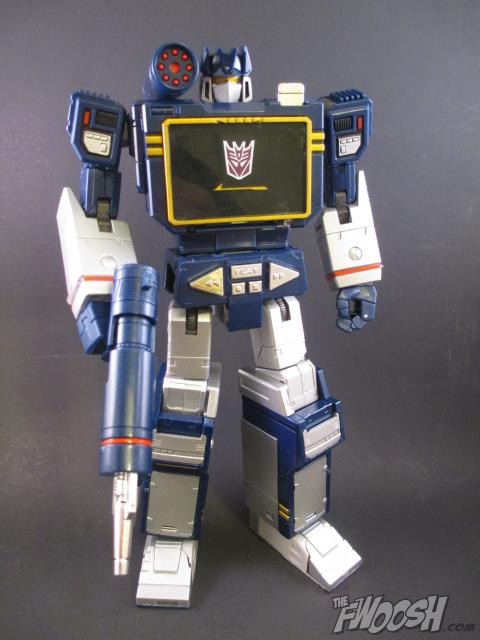 Now, this is the Soundwave I always wanted. Just glorious. Exactly like I remember him and he looks like he stepped right out of the cartoon. Being a Masterpiece Transformer, you expect a lot. High quality, lots of articulation, lots of detail, and accessories. We get all that here. 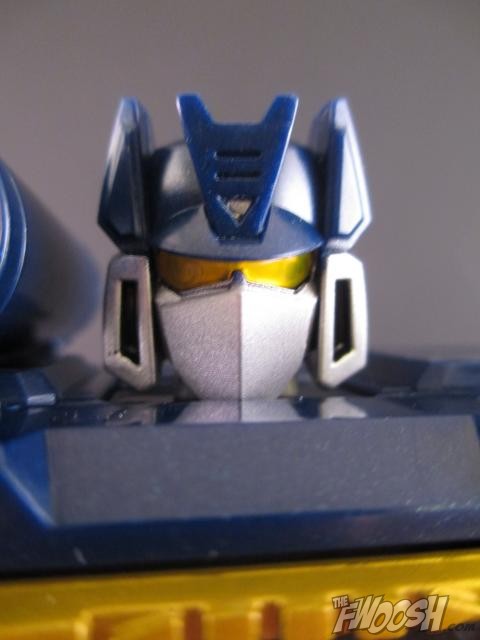 The head is just perfect.  Now, I know some prefer the red eyes of the Takara version, but it’s not a big deal to me.  The helmet and faceplate are spot-on and capture exactly why, as kids, we all thought Soundwave just looked so damn cool. 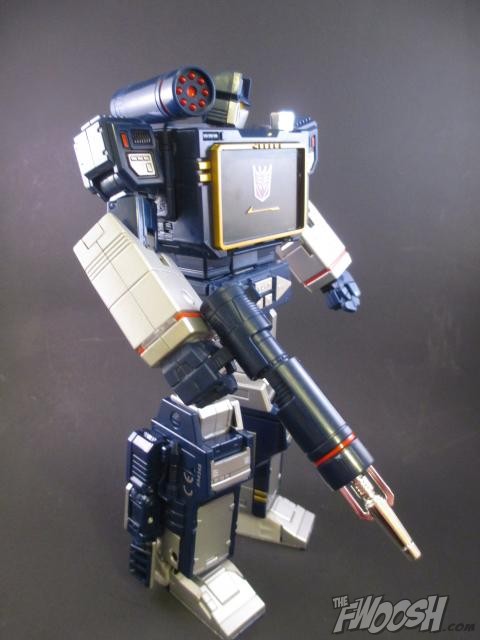 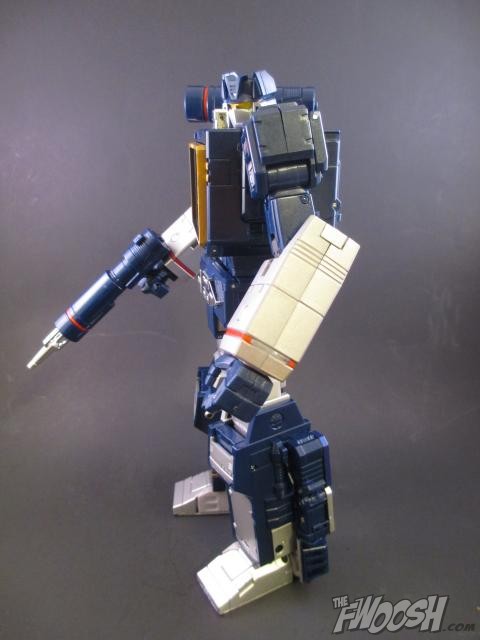 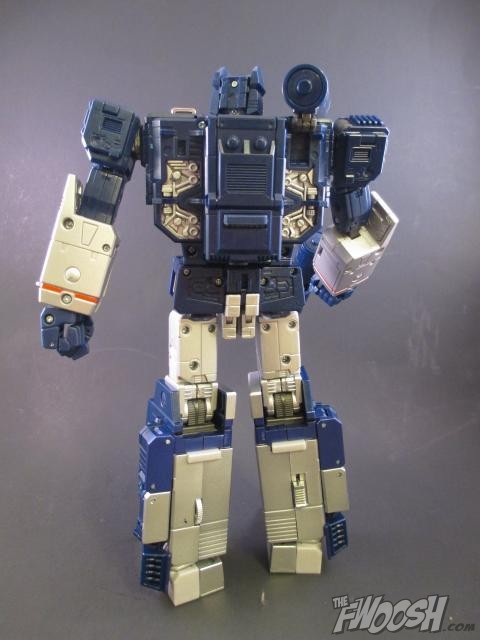 He’s definitely on the tall end of the Masterpiece scale, coming in at a hair above the Seekers. I believe that is actually pretty close to accurate ‘toon scale as Soundwave was one of the taller ‘Cons, which in hindsight makes very little sense considering he transforms into a cassette player.  Then again, Megatron turned into a pistol. 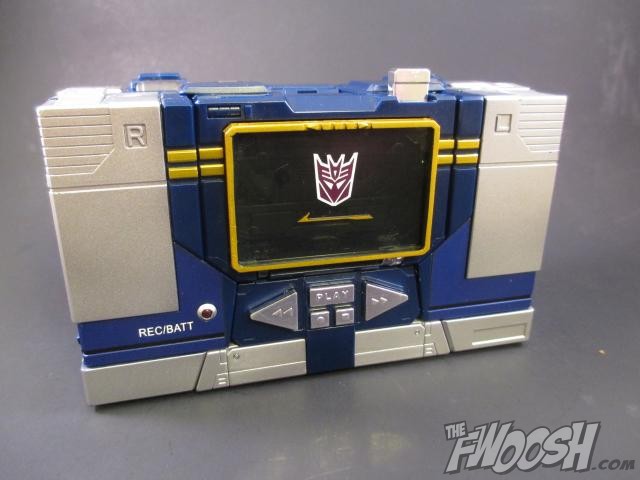 His transformation into the cassette player is really simple, especially for a Masterpiece Transformer, which is fine with me. I know some feel that the more expensive the figure, the more complicated the transformation to alt mode should be, but I really don’t like having to break out the instructions whenever I want to transform him to make sure I don’t break anything.

His alt mode is surprisingly detailed and is a great update to the original. Just like the original, it really looks like it could be a cassette player. 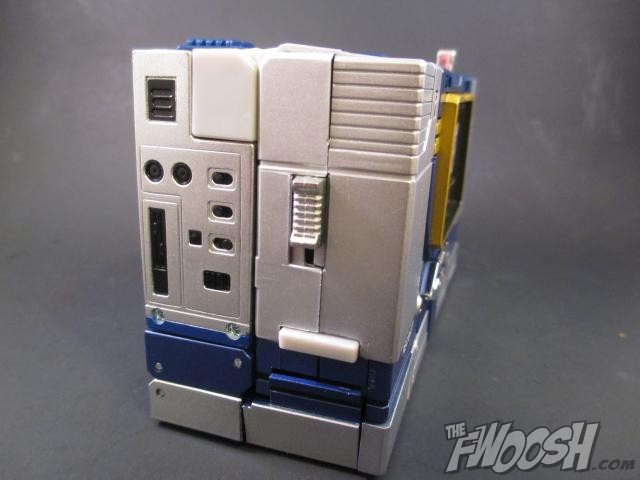 The piledriver attachments even attach to the cassette player mode like an exterior storage device or player. 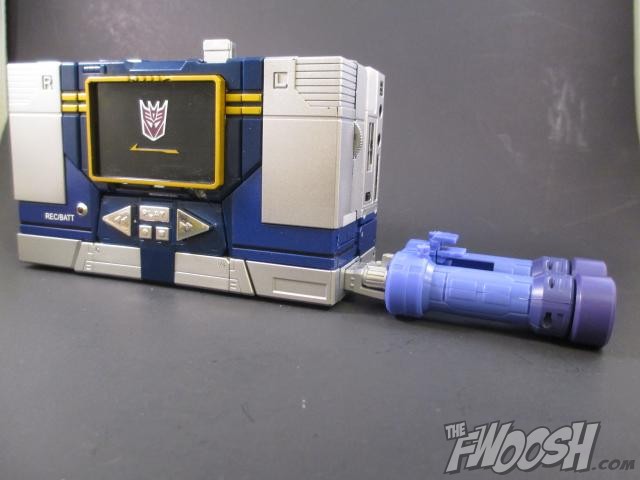 Speaking of cassettes, the Hasbro Soundwave comes with all five of his minions, whereas the earlier released Takara version only came with Laserbeak and the others had to be purchased separately. Each individual cassette comes packed in its own case: 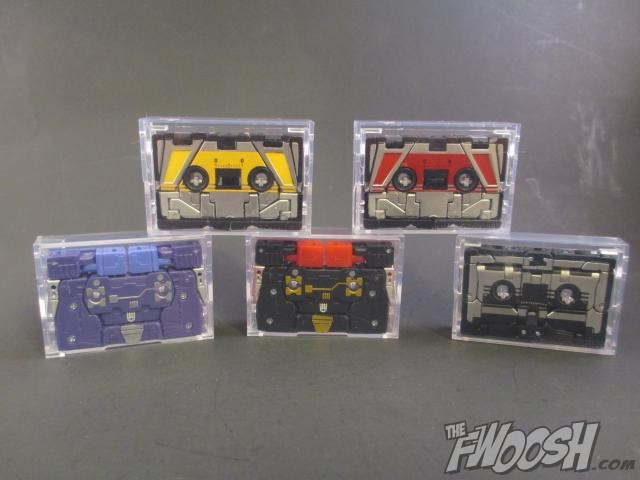 First up is Laserbeak: 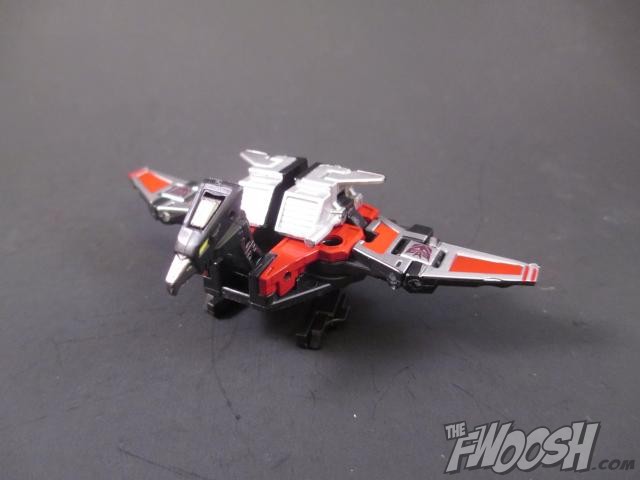 Love him. His transformation is simple enough, but, at the same time, his detail and sculpt are perfect.  His red is bright and shiny with almost a metallic look, much like the original G1 figure.  His neck, wings, and claws are poseable enough that it makes it easy to have him perched on Soundwave’s arm. 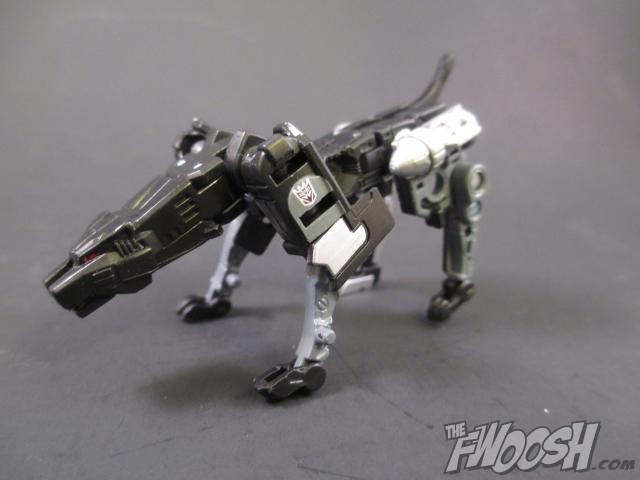 Also really well crafted. His legs, paws, neck, torso, and tail are all poseable and allow him to get into some skulking and sneaking poses as well as some fierce ones.  Would have loved if his mouth was moveable, though. 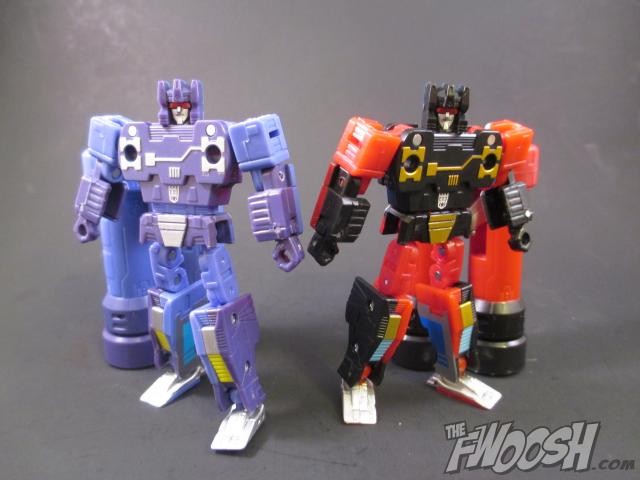 Wow these guys are cool.  They’re very well articulated and come with their piledrivers to cause all kinds of havoc.  The piledrivers  also contain their twin guns which also fit onto their backs, just like the original figures. 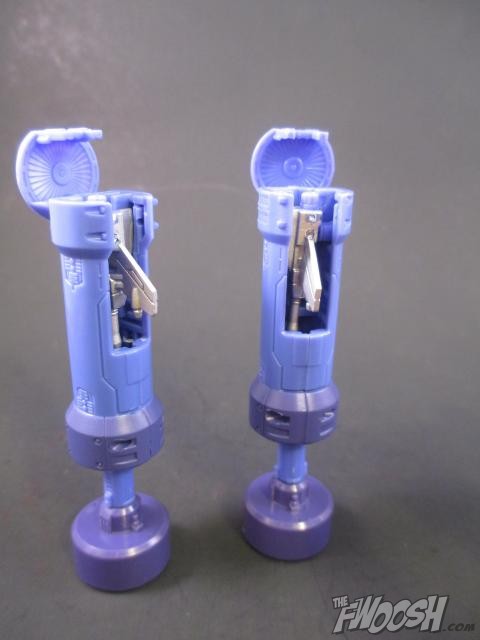 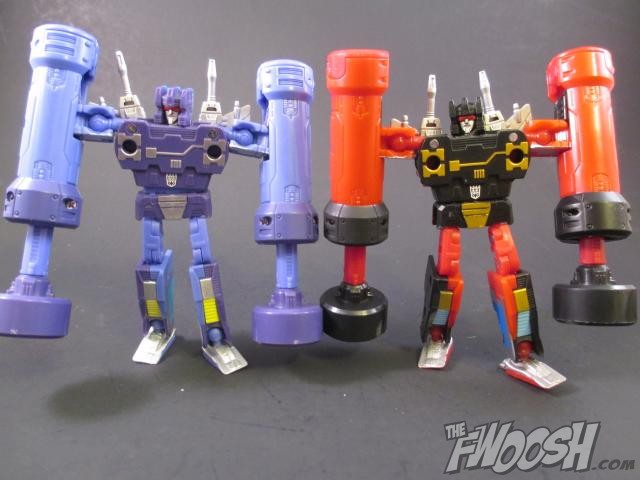 There is also a Buzzsaw figure included in the set, but unfortunately mine had a bit of a QC issue and arrived headless: 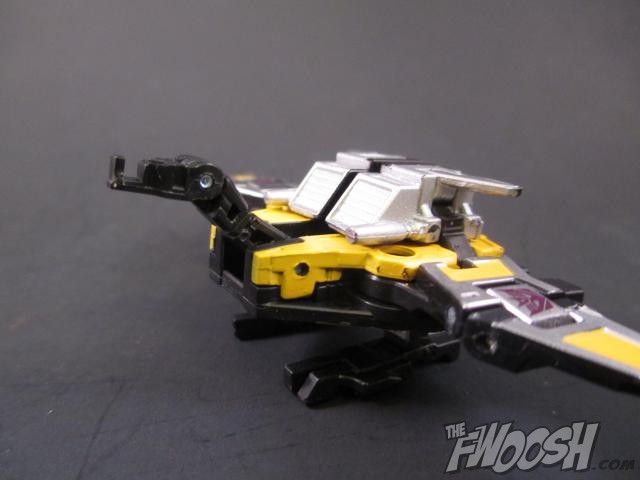 But if one had to be sacrificed, it’s him.  Never really knew the need for him and Laserbeak. Sucks, but I can deal with him. Hey, at least Ravage wasn’t missing his head.

I just love being able to have at least the other four at his command: 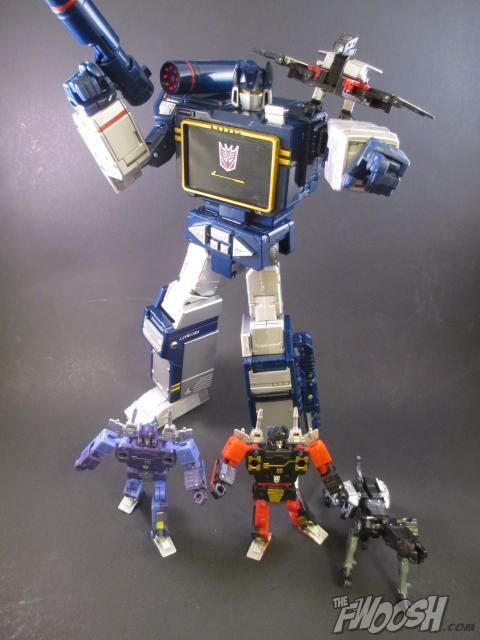 When the cassettes are transformed, Soundwave can stash up to three of them in his holder.  Not quite perfect because he can’t fit em all in there, but close enough to make me happy.

You can pop one out and there’s a button on his back that pushes the others forward so you can eject each one. 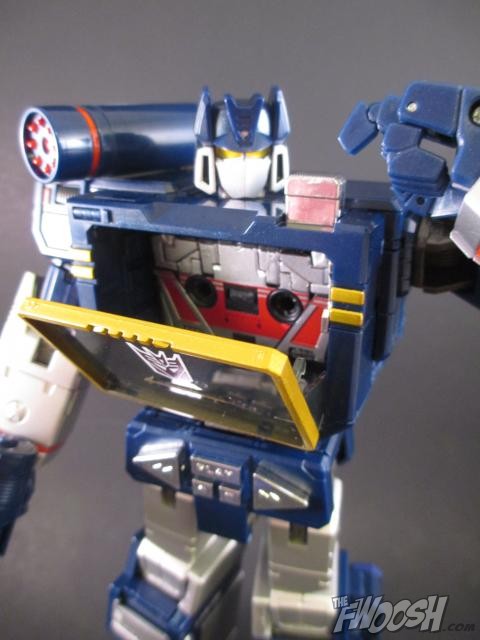 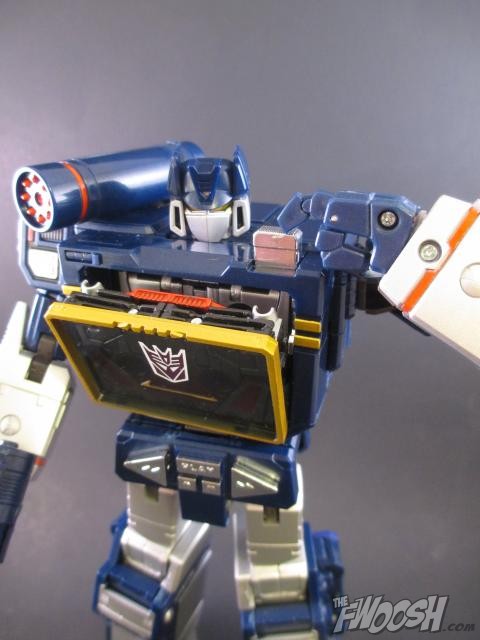 Soundwave also comes with an Energon Cube and a really cool feature where a grid attachment can be placed over his window for when he’s dispersing them out to cause havoc. 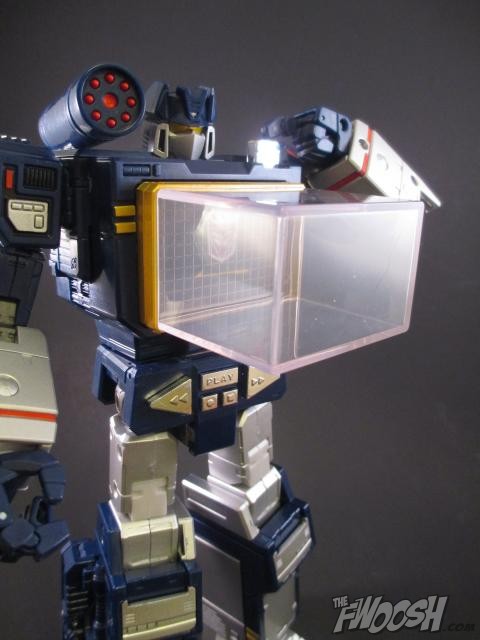 He also comes complete with a transformed gun mode Megatron to blast some Autobots away. 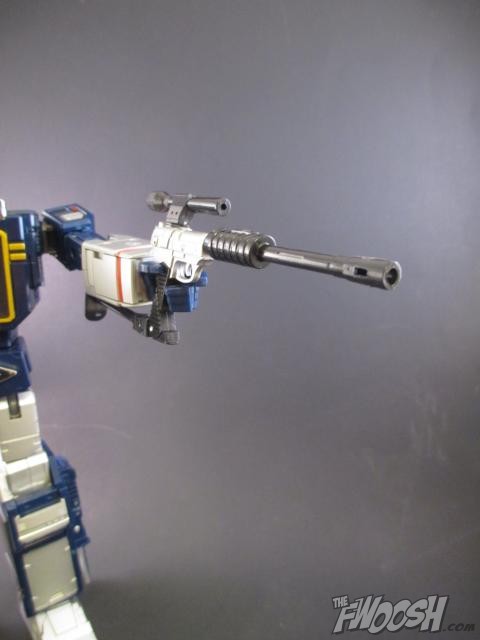 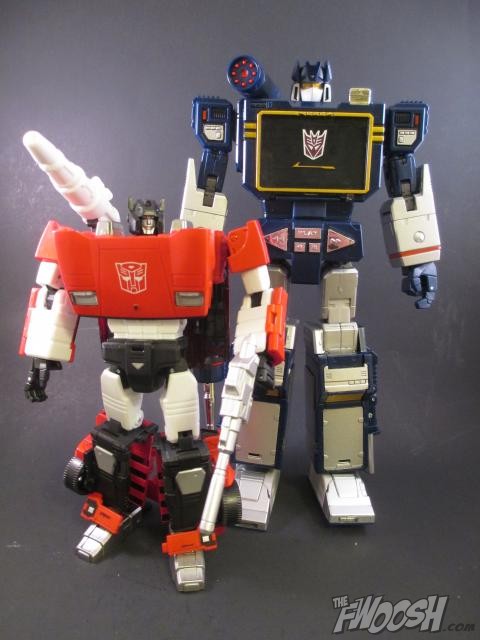 As you can see, he’s a big ‘un.  But that is perfectly on scale.  This really is a great figure.  Whether it’s to complete your Masterpiece collection or to just scratch that nostalgia itch, this is a must-own figure. He’s supposed to retail for $120, but TRU has marked up the price in certain areas — gotta love supply and demand.  They’ve been spotted at TRUs around the country, but distribution so far has been spotty and uneven.  He’s even popping up on the TRU.com site, but usually pops up at super random times and only for seconds at a time.

He may be some trouble to obtain but I highly suggest you try to because once you have him, you’ll see he’s completely worth it.