To get right to the point, Roadbuster is a better figure than Impactor, but that isn’t saying much, and he still isn’t all that great. He just doesn’t elicit as strong a WTF reaction as Impactor did, but that’s something, I guess.

Roadbuster occupies a curious space among G1 Transformers characters and toys. Hasbro licensed the original toy from Takatoku Toys by way of Bandai (along with several other toys including Whirl, Jetfire, Chop Shop, etc.) in an effort to get as much Transformers product out as possible while the line was till the hottest thing going in 1985. Even though he was definitely released as part of the original G1 line, Roadbuster was never included in the G1 cartoon or in the Marvel comic. Like the rest of the Wreckers, he was part of the Marvel Comics UK series, but we never saw him in any fiction on this side of the pond until much later. It’s also important to note that Hasbro no longer has the license for the original figure’s design, so any Roadbuster we see going forward will not look quite exactly like the guy pictured below:

Now, what really needs to be addressed immediately is that Roadbuster is often depicted as being a rather large Autobot. He’s a hulking mass of a ‘bot who positively dwarfs his teammates. This figure doesn’t do that, so this is yet another case where a character was released as a deluxe-class figure when he really should have been at least a voyager. Fortunately, his assortment-mate Whirl is getting the voyager treatment next year, so one can hope-hope-hope that Roadbuster won’t be far behind; however, Whirl’s advantage is he’s prominently featured in IDW’s More Than Meets the Eye — Roadbuster has no such media presence at the moment, so my worry is this may actually be the only Roadbuster we see from Hasbro for some time.

Roadbuster is pretty darn far from what could be considered an A-list Transformers character, but this is still the second figure based on the character we’ve seen released within the past five years (not including any Bay movie versions). He was part of a Target-exclusive set with Dirge, but both of them were rather dreadful repaints. Roadbuster was so far off the mark that this new Generations figure is actually an improvement — that’s how lame it was.  Still, this degree of attention for such a minor character (in the conventional sense) gives hope that the voyager dream may not be fruitless wishful thinking.

Until that day comes, though, this new Generations figure may be the best Roadbuster we have, and it really isn’t all that terrible; it’s better than what came before, but it does still miss the mark in several areas.

The packaging is standard Generations packaging with nice character-specific artwork on the card. His bio makes him sound like something of a war machine designed only for battle who can’t handle life outside of combat. His specs don’t necessarily support that theory since he appears to be pretty average in almost every category. This suggests he’s not the strongest ‘bot around, but he’s also far from the weakest, so he could be a decent soldier, but perhaps not one who’s capable of what someone like Impactor may be. 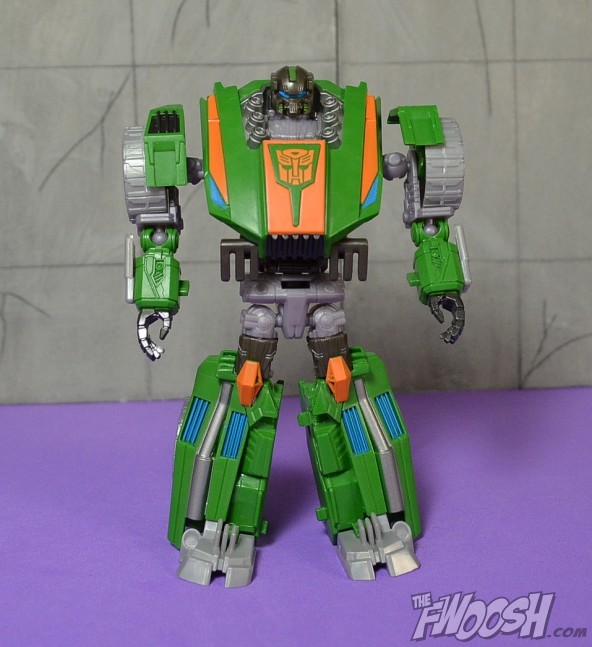 It’s not a bad-looking figure, but it isn’t really “Roadbuster.” This mold debuted last fall as Swindle in the Generations Fall of Cybertron Bruticus wave. It worked decently enough as a Cybertronian version of Swindle, but his colors were awful (lots of black and day-glo yellow plastic), and there were barely any paint apps to speak of. Roadbuster here fares better in that regard because his color palette is pretty sharp and is mostly true to the character.

Like every figure in this wave, he does suffer from the hollow syndrome that makes him feel a bit on the cheap side, but it’s not nearly as noticeable as it is with Impactor. There is very little kibble, and he has a decent range of poseabilty that actually allows for some pretty dynamic action poses. One nit I have here, and it isn’t even that big of a nit, is his shoulder pad-things would do better if they were to lock in place. As they are, they spin rather freely on his shoulders, so they tend to move when his arms are posed. The good thing about this is you can choose how you like them to be positioned, but the downside is they have to be readjusted often. They’re purposely skewed in one of the pics above because I couldn’t decide how I liked them best. 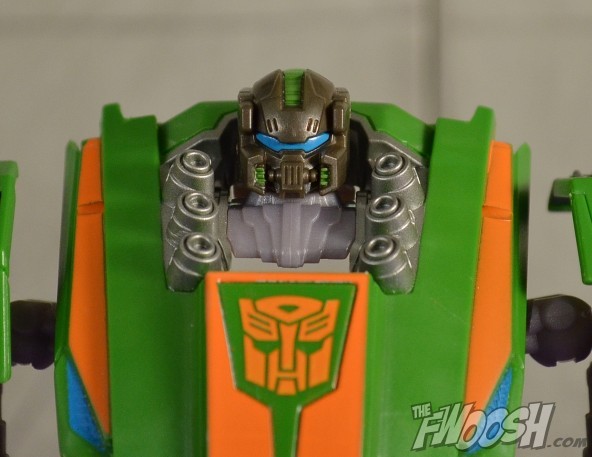 I really like his head sculpt a lot. It’s definitely an updated look with new details added here and there, but it’s still recognizably “Roadbuster.” But, like Impactor, the colors are off, so that could be another point of contention for some fans who were hoping for something a little more in keeping with the G1 design, but since Hasbro does not own the rights to that design, this could have been done on purpose to avoid any potential legal entanglements (that’s pure conjecture, though). One thing that I felt was missing, however, was a Wreckers symbol. Impactor came emblazoned with both Autobot and Wreckers  symbols, but Roadbuster only has that giant Autobot symbol on his chest. Well, this is why Primus gave us Reprolabels. 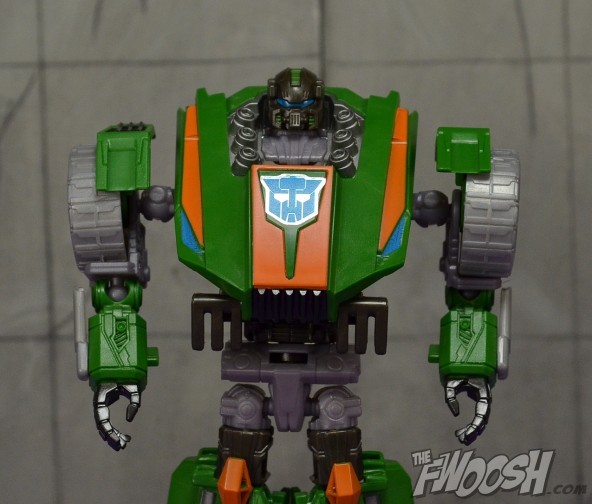 The Wreckers symbol isn’t quite a 100 percent perfect fit, but it’s darn close and it looks good to me. The blue even matches the blue highlights on the figure, and I definitely prefer this to the orange Autobot logo he had before. He’s a Wrecker, dammit, so he’s going to wear the symbol proudly.

Ugh, he’s just so SMALL. Instead of towering over the crew, we get a Roadbuster that’s a good deal shorter than Springer. I’m not sure what the answer would be, though. Leader class? Yeah, right. Unless a 3rd-party team is willing to tackle that, it’ll never happen. The best we can hope for in the future is a Roadbuster that is at least as tall as Springer.

For weapons, he comes packing some pretty cool artillery. He comes with a smaller pistol (picture far left above), and a larger cannon that has this sort of open-and-close claw-like feature. It’s actually pretty cool and is nowhere near as awkward and cumbersome as Impactor’s weapons are. His shoulder joints aren’t all that strong, however, so he may have a little bit of trouble supporting the larger cannon. Mine can do it, but not super effectively. 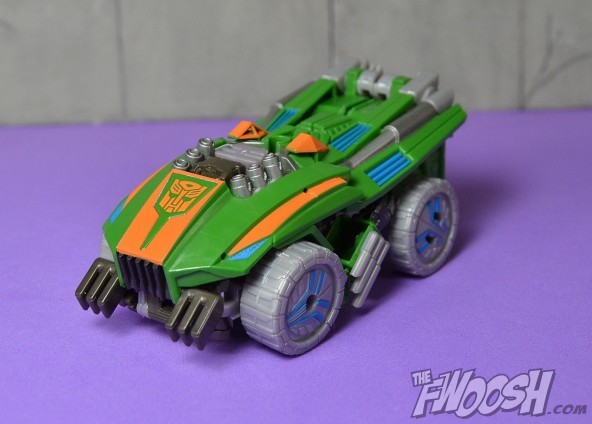 His alt mode looks to be some sort of Cybertronian car, but I really have no idea. Truth be told, since there is no visible spot for a driver or passengers, it sort of looks like a shoe with wheels or a roller skate. It also looks too compact and “cute” for Roadbuster, who should be one of the bigger bruisers on the road.

He’s definitely not going to be spending all that much time in this mode, I can tell you that. But at least it has a fluid design to it and everything fits together properly. At least there’s that. It’s still a bit silly looking, though. This design worked a bit better for Swindle, but for Roadbuster? Nope.

His guns can be attached and that helps him look a bit less like a roller skate, but only a bit.

Like Impactor, this guy is only necessary if you absolutely have to have a Roadbuster on your shelves. He’s not a “bad” figure, but… he just isn’t Roadbuster. Hopefully Hasbro has plans for a voyager release, but if that never happens, it may not be a terrible idea to grab this guy now while he’s available just to have a Roadbuster. That’s how I rationalized it. I also find it interesting that whenever I see the Wreckers wave in stores, Impactor and Roadbuster are always the two that are missing. I have a feeling I’m not alone in my justifying and rationalizing the purchase of the pair.

The wave is currently hitting stores everywhere, so if you’re like me and you just want a Roadbuster for your collection, then you shouldn’t have too hard a time picking up one.