Before there was Optimus Prime, there was Orion Pax. Depending on the continuity you chiefly subscribe to, Orion Pax has been a dock worker, an archivist, an intellectual, a gladiator, and a cop (among other things). The point is, there was a time when Optimus Prime was not the Autobot super-soldier we all know and love, but was a much more inauspicious Autobot who took orders and tried to do the best job he could wherever he was. In a sense, Orion Pax is sort of the Billy Batson or Prince Adam of the Transformers Universe. Once he came in contact with the Matrix, he was transformed into the very model of heroic nobility. 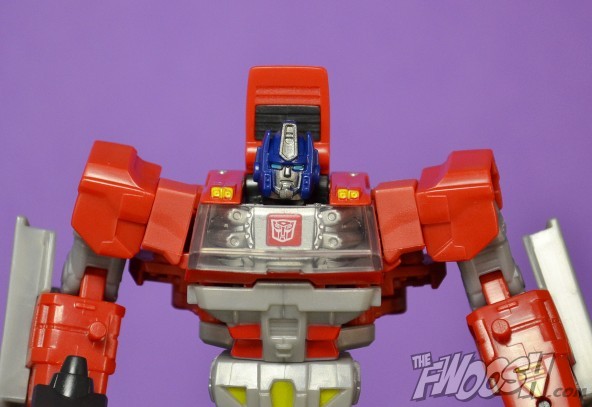 While there have been many, many Optimus Prime figures released over the decades, there haven’t been many figures based on Orion Pax. There was an eHobby exclusive a few years ago that was a repaint of the G1 Kup figure, there’s a Transformers Prime Orion Pax that Takara issued, and then there’s this one. Well, iGear also included an Orion Pax alternate head for their Faith Leader figure, but the point is Orion Pax really hasn’t received too much attention from the toy-creator gods. And it does stand to reason since Optimus Prime is the hero and leader, while Orion Pax has always been cast as a much more mild-mannered sort in order to establish a contrast between the two. He just hasn’t been very interesting. That is…

… until now, pretty much. IDW gave him his own Spotlight issue, which is included with the figure, and the character seems to be getting fleshed out much more. Even casual Transformers fans are more aware that Optimus Prime hasn’t always been “Optimus Prime,” so that actually opens up all sorts of interesting storytelling possibilities concerning the true nature of Optimus Prime. The card’s bio suggests this Orion Pax was an archivist with some revolutionary ideals that would eventually lead him to become the Matrix-bearer we all know and love. His stats are all over the place too. His intelligence and skill are his key attributes, while everything that would make him an Autobot warrior hasn’t yet been developed. So in terms of ability, this guy is about as pre-Prime as we can get. 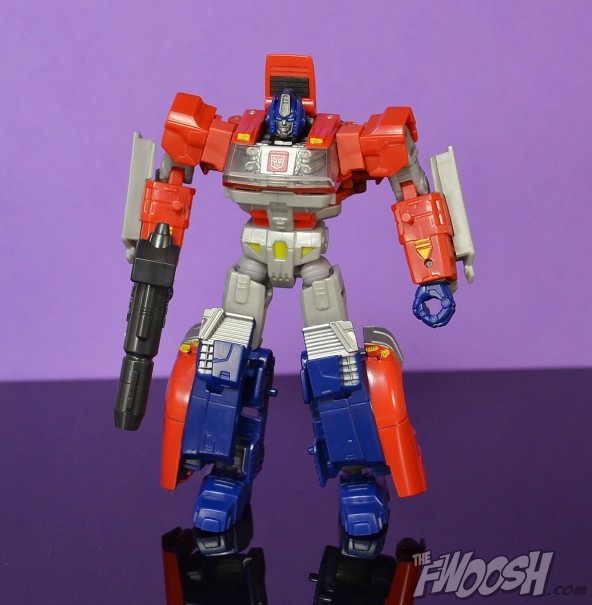 There’s no way to look at this guy and not see Optimus Prime. All the elements are there, right down to the yellow details on his forearms. But there are also enough unique design elements here to enable him to stand on his own outside the shadow of Optimus Prime. One crit I have of his overall design is that for an archivist and historian, he sure does have one heroic and powerful-looking build. That’s the thing that makes it most difficult to not see Optimus Prime here.

His chest, which houses the Autobot sigil, is a clear plastic piece that reveals some of his inner workings, and it’s probably the chief element that distinguishes Pax from Prime because it simply doesn’t resemble a truck cab. Other than that, most of the design differences are pretty subtle. He’s also missing the trademark faceplate, but this isn’t the first time we’ve seen that, thanks to the Bay movies and Transformers Prime. Pax isn’t always depicted without the faceplate, but since it’s such a part of Optimus Prime’s look, leaving it out is huge in terms of distinguishing the two.

He looks pretty solid all the way around and does not have that awful hollow feel even though he is just as hollow as any other modern Transformer; it’s just hidden better here. He’s very easy to pose and has a good center of gravity, which makes it easier for him to hold poses. His large feet don’t hurt in the endeavor either. His shoulders tend to pop out of place fairly often, but it’s not a huge deal or a deal breaker.

For weapons, he comes with a blaster that is very close in appearance to Optimus’ signature blaster. More interesting, however, is the energon axe. On one hand, it feels a little random since he isn’t even depicted with it in the included comic, but on the other, there have been versions of Optimus Prime that transformed into a firetruck, so the axe may be a nod to them? I can’t help but be reminded of the Transformers Animated series where an axe was one of Optimus Prime’s key weapons.

Here, it looks great and I love that he can wield it in totally dramatic, heroic poses. It’s way more fun to pose him with than the blaster.

Here we have a bunch of comparison shots to give a sense of his size and scale. Clockwise from top left we have Generations Wheeljack, Hasbro’s MP-10 Optimus Prime, iGear’s Faith Leader (with Orion Pax head), the new Generations legends Bumblebee, and wave-mate Trailcutter.

He’s clearly on the small side, and comparing him to Wheeljack gives a sense of just how slight and small he is since Wheeljack was once considered one of the smaller figures. The smaller size works better here, though, because he’s not “Optimus Prime” yet, so a large, powerful body doesn’t feel appropriate. The small size works for him, though I do like they way he looks when posed with legends Bumblebee. Their two odd scales seem to complement one another well.

This version of Pax is also more effective than iGear’s. The iGear head is more true to the G1 cartoon Orion Pax, but all it is is the correct head on the wrong body. It was really cool for iGear to include that head, but there’s more to Orion Pax than just the head,  so Hasbro’s is actually the better figure in this particular case, meaning it’s more successful in capturing “Orion Pax” as a whole, complete character and figure.

His alt mode is a rather nifty futuristic-looking pickup truck. It mostly works, but it’s the cab that sort of falls apart. The arms don’t conceal themselves very well with only parts of them hidden behind those weird gray panels. Otherwise, it basically works and the parts do fit together well as they’re intended. Both of his weapons can attached to give it a sort of “battle wagon” feel, but I definitely prefer it without the weapons because it just looks cleaner.

Orion Pax isn’t a character the majority of fans may view as “essential,” but since he is getting more and more attention in the comics, that is slowly changing. This figure does have its shortcomings, but it’s still one of the better deluxe-class figures we’ve seen recently.

This wave of IDW deluxes can currently be found at Target stores, which is where I found them, and Big Bad Toy Store has them in stock as well. Overall, this is a fun figure that is definitely worth picking up, so keep your eyes open for him.