That was the first thought that popped into my head when I removed Metroplex from his box only to reveal that the box wasn’t much bigger than the figure it contained.  I knew before I opened him that he was going to be a huge figure that stood over two feet tall, but that still didn’t prepare me for how large this figure is.  Until you see him in person, you really have no idea how big of a Transformer this is. 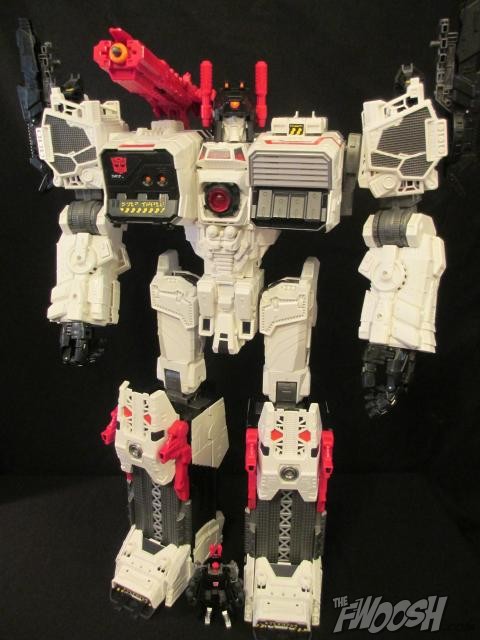 Massive — just freaking massive.  Metroplex stands in at over two feet tall and weighs almost ten pounds.  Because of that, taking pictures of this titan-class Transformer was quite a chore.  I apologize for the blurry pics, but he just doesn’t fit in my usual photo setup, so I had to adjust accordingly.  And by “adjust accordingly” I mean lose the tri-pod and try to hold the camera steady and try to get most of this guy in the picture. 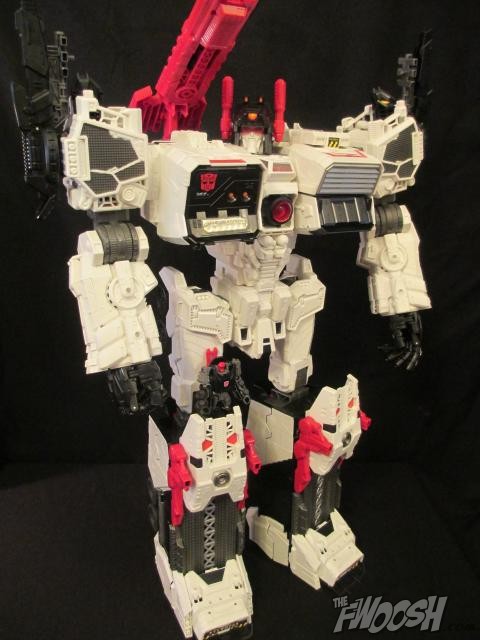 His robot mode is well done.  Nicely detailed and very well sculpted.  He’s highly articulated with forward and lateral moving shoulders, swivel biceps, elbows, spinning and bending wrists, individually articulated fingers, swivel waist, forward moving hips, knees, swivel thigh cuts, and a swivel neck.  His elbows and knees click when moved, and most of the other points of articulation are very tight and function as well as you’d like on a Transformer. 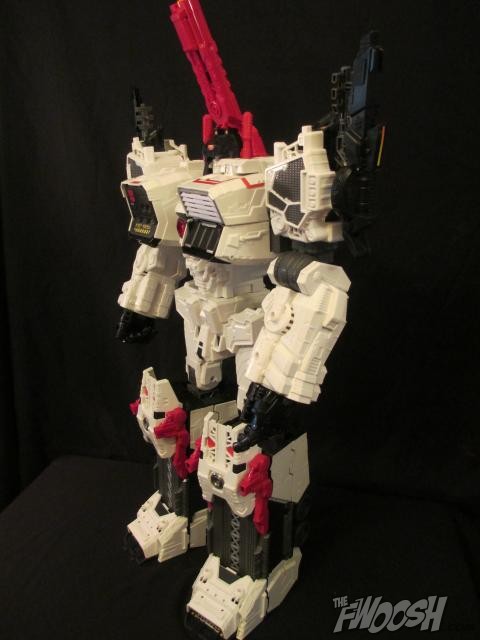 His one point of articulation that bugs me is his waist.  Or, more accurately, his hips. 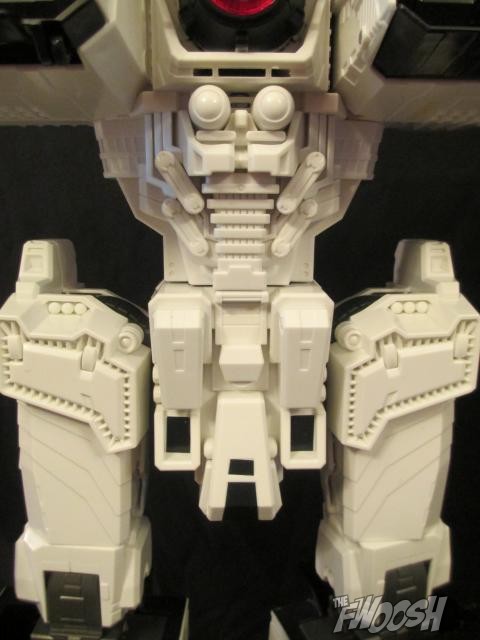 Not that it doesn’t move like it’s supposed to,  but he’s prone to bending back on himself, or falling forward at the waist when you pick him up.  Now, this could just be a loose joint on mine, but he falls backwards or forward if he’s nudged a bit in either direction.  As long as he’s standing upright he isn’t going anywhere, but when you pick him up and gravity grabs him a bit, he’s doing one or the other.  Not a deal breaker at all for me since I doubt I’ll be transforming him very much, but I can see it being a pain for others who will. 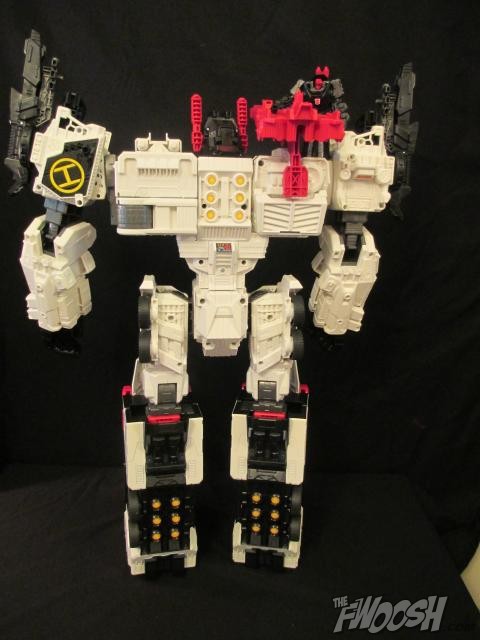 As we get a closer look, you can really start to see all the details in the sculpt.  He’s supposed to be a city, so having a bunch of nooks and crannies makes sense to me.  Plus, as big as this guy is and as white as he is, he better have some depth and detail to him or else he’d look bland.  With the way they did detail him up you can really just envision millions of  parts churning and grinding in unison as this big fella gets moving. 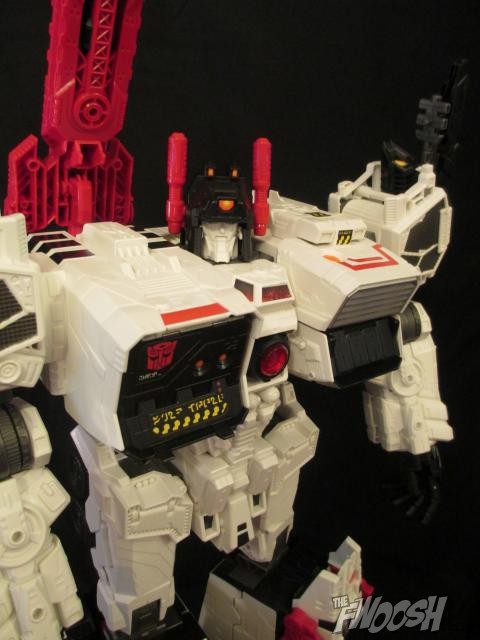 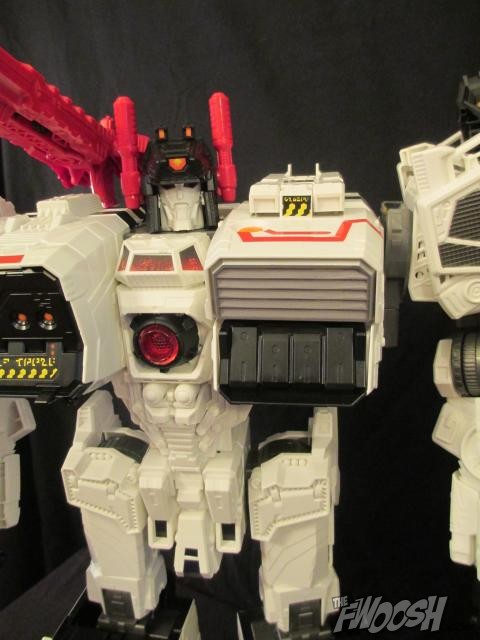 His head sculpt is really cool. It’s definitely still close to the G1 version, but at the same time it’s a nice update to the G1’s design and details.  He also has a visor that can be clicked down over his eyes for when he goes into battle. 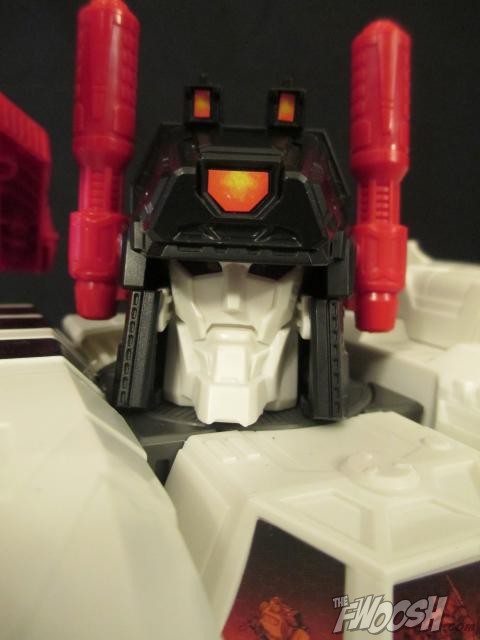 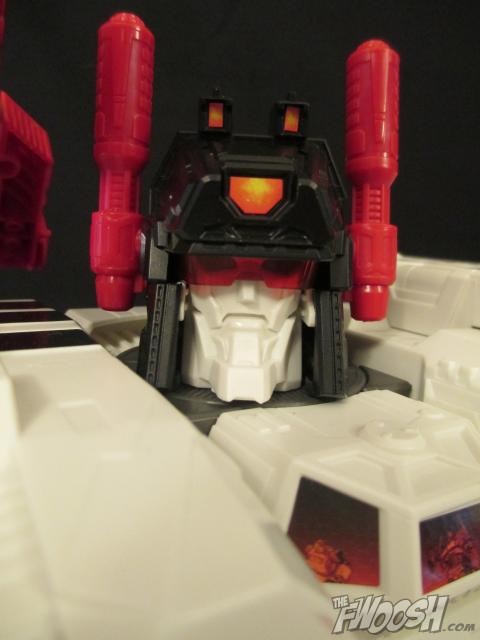 As seen in a few of the above pics is Scamper, who also comes with Metroplex.  He’s about the size of the old school mini-bots and there are multiple places on ‘Plex where Scamper can be stored or can even pilot a gun, or just hang out on him. 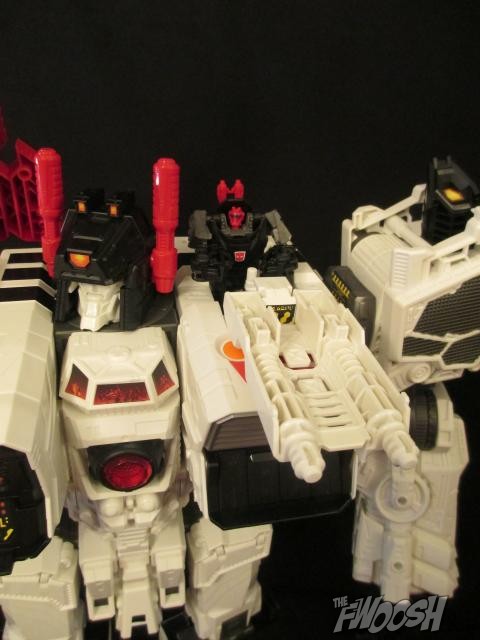 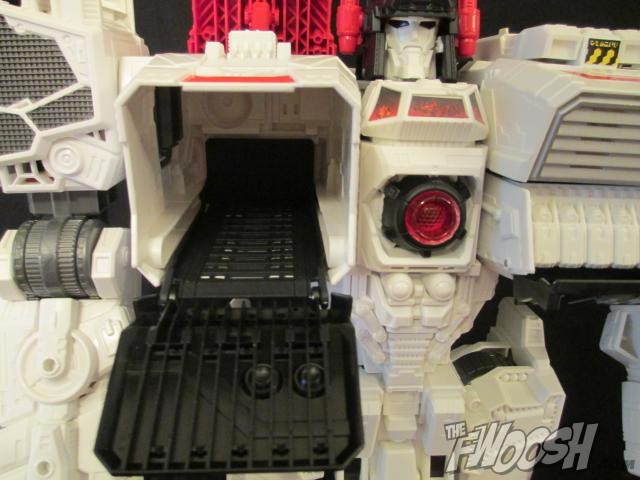 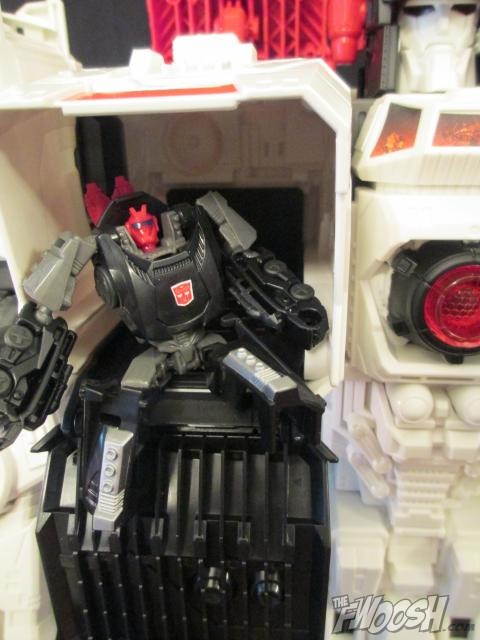 As you can see from the pics, there isn’t a whole lot that goes into transforming Metroplex into either city or vehicle mode.  Really, really simple transformations for both, and, truthfully, he basically just sits down and stuff folds out of him to make the switch to either.

First up is vehicle mode: 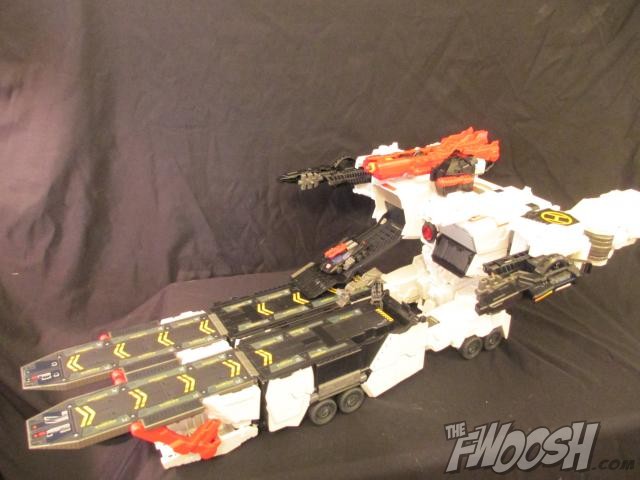 This mode almost feels like a land version of an aircraft carrier, like a mobile-battle platform. His chest compartment opens up and a ramp slides out.  There is also a little crane with working clamp that can be extended from him once in vehicle mode. Like I said, pretty simple. Even easier is to swap him over to city mode: Basically, all you have to do is flip his legs and arms over, spin him around, and open his compartments.  Still, even as simple as it is, it’s an effective transformation.  He looks like an Autobot mobile city.  This mode opens up to a few command centers, a helicopter pad, and some more cannons. Very neat, but definitely not how I’ll be displaying him.  Because while his triple-change transformation is cool, his value lies in just how big his ‘bot mode is.  Because on your shelf you can have this: …and that is just too cool to pass up for me.  He really towers over my Autobots. Sure, he’s not accurate titan scale, but I don’t think getting him precisely scaled is possible.  So I’ll live with this one.  I actually don’t think my shelf could hold one bigger than this.

I have to recommend this guy to everyone who collects Transformers. It’s just such a unique piece even in just ‘bot mode, especially considering that Masterpiece  Transformers are priced at around $100 these days, this guy’s price tag at a little over $100 seems like a bargain for how massive he is.

One word of warning, though, for those with little patience, or for those without a steady hand: he comes with stickers.  And I mean a lot of stickers: Over 130 in all.  Some are smaller than an inch in size. Most are okay to apply, but there are some where I had to break out the tweezers and the magnifying glass as though I were customizing.

Even if the stickers were left off, it’s still an awesome figure.  He’s a blast to play with because of not only how well he’s made, but just because of the sheer size of him.  He’s also quite a sight on the Transformer shelf.  If you haven’t picked him up already, I’d suggest grabbing one now.