He may not be Optimus Prime, heck, he may not even be Springer, but Impactor is a character who has a pretty strong cult following among Transformers fans thanks in large part to IDW’s The Last Stand of the Wreckers mini-series. The character was actually introduced way back in ’86 in “Target: 2006,” an arc within the Marvel Comics UK Transformers series, but it was when James Roberts and Nick Roche got their hands on him that fans really started noticing the Impactor-sized vacancy in their collections. The Wreckers were suddenly more popular than ever, and their (former) leader was an absolute necessity. He has a hook for a hand. And he snarls. And he’s not afraid to question Springer’s authority. He’s a loose cannon, and that’s pretty much enough for Impactor to shoot to the top of Transformers want lists everywhere.

This. We want this. Exactly this. To hold in our hands and to have pound on our Decepticons.

Thankfully, iGear heard the call and sprang into action. They teased what would easily be the perfect rendering of the character in plastic, and fans responded by throwing their credit cards at their monitors. It looked so dead-on that there was no way to not get excited. This was the day iGear won the entire Internet. 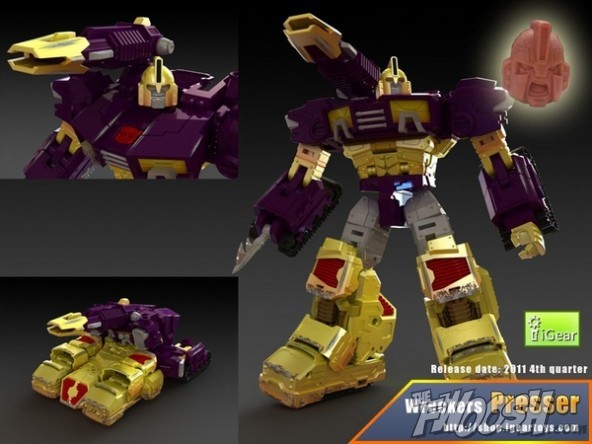 Unfortunately, that was two years ago and nothing has materialized from iGear. Sure, other figures have materialized from iGear, but not their take on Impactor. A couple months ago they announced this figure is still on the way, so there’s hope, but, really, who knows if we’re ever going to see it? It’s been a painful wait, to say the least.

But then who should heed the call if not iGear? Believe it or not, Hasbro themselves — imagine that! It was announced last fall that an entire Generations wave was on the way made up entirely of Wreckers that were to be repaints of the Fall of Cybertron Bruticus wave. We went bonkers with excitement… until we actually had the Bruticus wave in hand and learned these were easily five of the crappiest Transformers toys to be released in recent memory, so that tempered the ol’ enthusiasm a little bit, to say the least. But still — Wreckers. Even a crummy Impactor figure was still an Impactor figure, so he’d still be worth hunting down, right? RIGHT?

Generally speaking, Impactor is not a “major” character by any means. Especially in these “post-Bay” days, it’s tough for a character who isn’t Bumblebee, Optimus, Starscream, etc. to get a new figure built from the bottom up with a new sculpt and a new mold. Still, Springer and Blitzwing were given awesome new voyager figures, and, heck, Springer’s figure was even based on his appearance in The Last Stand of the Wreckers. There are plenty of people tossing around “figure of the year” with regards to that Springer, so it would seem Hasbro is at least aware of the desire that exists for figures based on the now-classic comic. And Springer looks like he leaped straight from the pages of the comic. He really does.

But Impactor? He was not destined to be so fortunate. And it kinda stings a little. 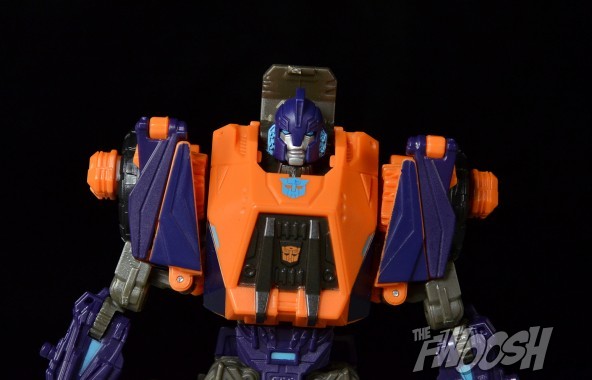 Because he’s not a major character in the conventional sense, this could be the only Impactor figure we ever see from Hasbro, and it misses the mark in so many ways that it’s difficult for even the most hardcore Wreckers fan (DisThunder comes to mind) to justify the purchase. Plenty of people are passing on this figure and are crossing their fingers that the iGear figure eventually does see the light of day. And… I really can’t say I blame them one bit.

Then there are those, like Industrial and me, who bought this figure just because we’re fiending so badly for some — any — representation of Impactor to put on our shelves, so we’re using this as a “place holder” until something better comes along. It’s nuts.

So… what’s the problem with Hasbro’s figure? In short, everything but the head sculpt.

This mold debuted as Onslaught, based on his appearance in the “Fall of Cybertron” game. The mold didn’t do Onslaught any kind of justice, and it definitely doesn’t serve Impactor well either. The plastic feels cheap (though I will say it feels better than what Onslaught was saddled with), he’s noticeably hollow, and even the colors aren’t quite on the mark. The Bruticus wave was one everyone wanted to like and support because it was Hasbro’s attempt at a combiner team based on deluxe-class characters — a dream come true — but they seemingly cheaped-out so badly with each figure that it was difficult to get excited about this Bruticus, particularly when about a dozen 3rd-party teams were producing combiners that were running circles around Hasbro’s attempt.

But maybe the Wreckers would be better, right? Nope.

The Wreckers combine to form Ruination, and all the same shortcomings Bruticus was afflicted with are present and accounted for here. But at least they’re the Wreckers and are characters we really want to have on our shelves. Aside from the weak molds, most of them fall short in simpler ways that could have been easily avoided. Impactor is no exception. 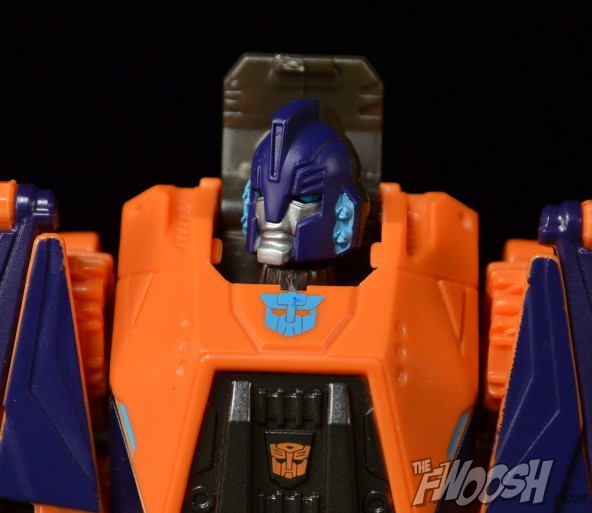 An orange helmet and a dark blue/purple torso would have been closer to the mark, just as far as colors are concerned, but even that simple bit of accuracy was neglected in favor of what we got, which is the complete opposite. With the exception of the head sculpt, there is nothing here that suggests “Impactor” at all, so the appropriate color scheme/pattern would have done at least something in establishing this mold as the character, but nope — as it is, it just gives us one more thing to complain about and bemoan when we look at the figure. (Say it with me: C’mon, iGear! Release yours already!)

I do like that Hasbro saw fit to give him a proper light blue “Wreckers” sigil on his upper chest in addition to the Autobot symbol just below it. I think that’s a neat touch and it’s the first time I’ve purchased a figure from Hasbro and didn’t have to add a Wreckers sigil via Reprolabels. But I swear they did that in an effort to distract from just how underwhelming this figure is (and it almost worked). 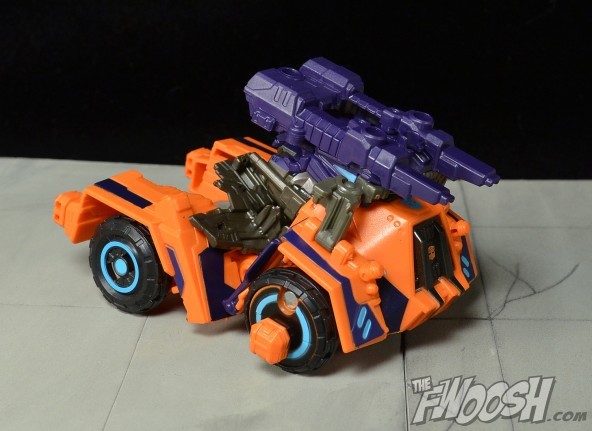 As lame as the ‘bot mode is, the vehicle mode is even worse.

From certain angles, it almost sort of looks like something that could be construed as a vehicle of some kind. The biggest problem is that Ruination’s head is barely concealed in this mode (not that it’s exactly “hidden” in his ‘bot mode either), so it becomes an awkward piece of kibble that really has to be covered up since it doesn’t integrate into the transformation at all.

His weapon, when attached to his alt mode, is perpetually aimed at the ground in front of him, so it looks really… stupid. There’s nothing else to say. Oh, wait, but when you add his harpoon/weapon thing it looks even worse because because now he has this giant cannon of doom and fury trained straight at the ground. It’s like he was designed to clear out snowbanks rather than Decepticon troops. 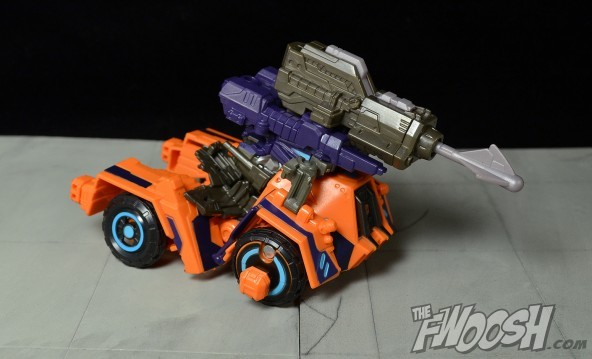 There is so little to say about this guy that could be considered positive. To top it all off, the arms on mine have a habit of popping off whenever I try to pose them, so not only is he one of the fugliest figures to ever hit the pegs, but his design is such that he’s not even fun to mess around with and pose because I have to continually put him back together. Such a bummer. 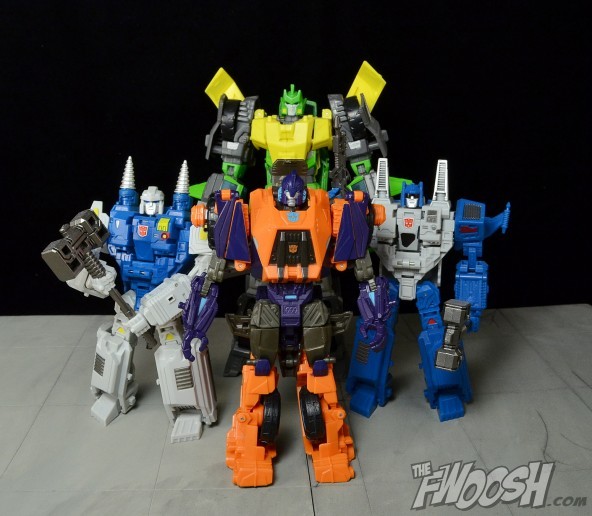 In pure masochist fashion, despite all the disdain I hold for the figure, I still found it oddly satisfying to add him to my small Wreckers display. I’m sure that’s just the sickness talking, but as bad as he may look, the company he keeps on my shelf makes him look a whole lot better. Right now he’s the homely girl at the bar who has really hot friends. At least that’s something, and it makes me not regret the purchase to the point of my listing him on eBay the second I was done taking pics. I may actually keep him around for a little while (but the second something better comes along, he is so gone).

If you’re desperate enough for an Impactor to add to your shelves, this guy and the entire Ruination wave are hitting just about everywhere at the moment. Buy at your own risk, though, because I feel pretty confident in saying he’s one of the worst figures to be released this year.