Metroplex is an insane beast of a figure that really has to be seen to be believed. Never in my wildest Transformer dreams did I think we’d ever get something like this in 2013, but not only did we get it, but Hasbro actually released two versions of this behemoth.

Last week Prodigy took a look at the retail version that’s currently popping up at Toys R Us stores and at online shops like BigBadToyStore and Amazon, so what we’re looking at here is the SDCC/HasbroToyShop.com-exclusive version. Both figures are essentially the same, but there are some differences in terms of the deco and accessories that are worth looking at, so that’s what the focus will be here since Prodigy was good enough to do most of the heavy lifting in his detailed review. 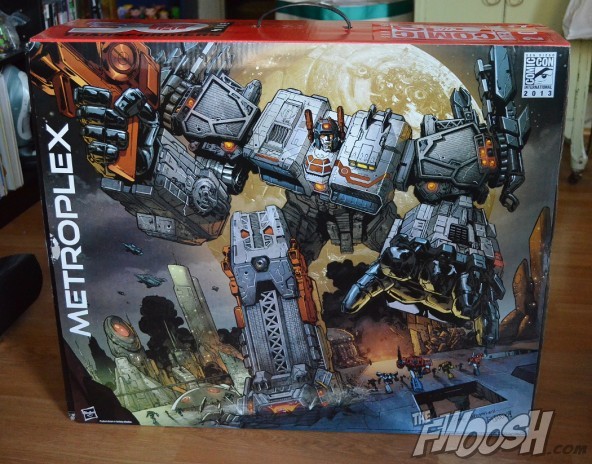 First of all, the box is way different. I know packaging isn’t always a priority for many collectors, but the packaging here is kinda interesting, and holy cow is it big. I can’t believe this beast was sold at SDCC. I can’t fathom what it must have been like to carry this monster around the convention because, at 22″x27″x8″, it’s just huge, and it had to be a pain to walk around with. At least Hasbro was thoughtful enough to include a handle at the top. You know, for ease and stuff.

The artwork is pretty sweet, and I think it’s worth keeping around just for that. When looking at the artwork, we get a sense of just how big Metroplex is as a character when we look just to the right of his foot and see Optimus Prime and co. racing into action. Metroplex is huge — there’s really nothing else to say. He’s the first “Titan-Class” figure to be released in the Generations line, so if he ends up selling well and is a success for Hasbro, the mind boggles at what other characters may be released in the future. Trypticon? Scorponok? Fort Max? GIVE ME ALL OF THEM. 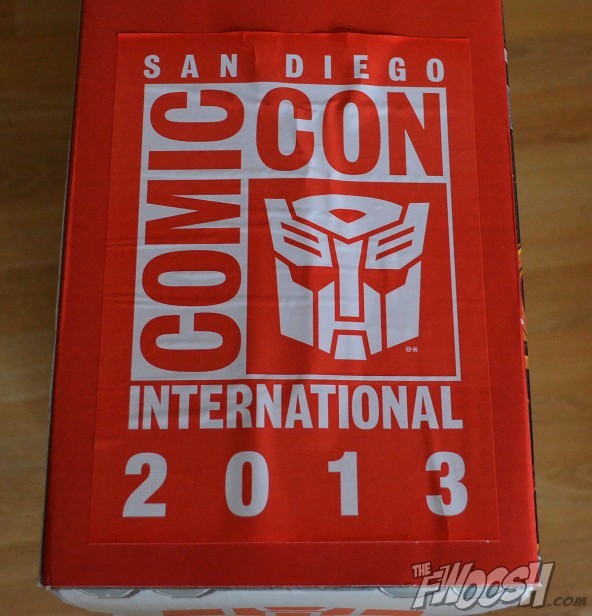 This giant sticker makes it official, and it roughly translates into English as “This will be expensive and a huge pain in the butt to get.” 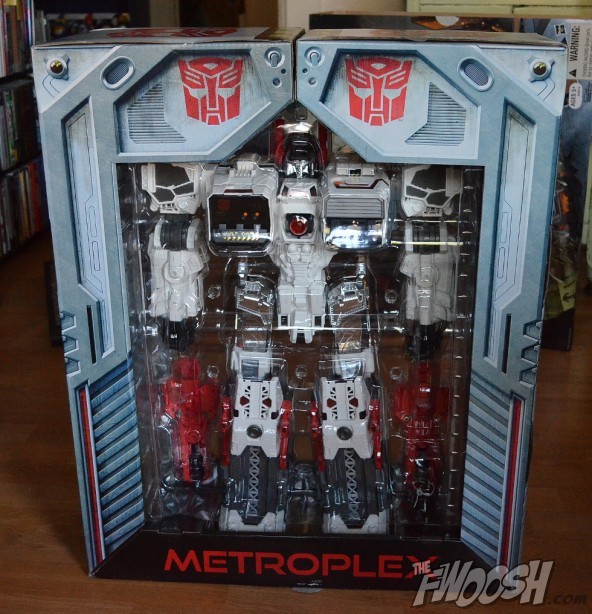 As nice as the box’s outer sleeve looks, the inner box is actually what makes the packaging worth a look.  Metroplex is housed in a cardboard frame that’s meant to look something like him, I think, because some of the design elements are similar. At the top, in between the two Autobot symbols, is velcro that holds the whole thing together. When you separate the velcro, the box “transforms” by splitting in half. Each half falls to its respective side, and now you’re free to remove Metroplex from the plastic shell. I mean, I use the word “transforms” very loosely here, but when I did this the first time, that’s what came to mind immediately.

It’s kinda neat that they went through all this trouble for this little gimmick, but for many people it is going to be ultimately unnecessary because the box is going to be a difficult one to store since it’s so huge. Normally I’ll keep an exclusive’s box if it’s cool, but this one will probably have to go in the trash because the figure itself is going to be difficult enough to make space for, so finding a spot for another huge piece like this probably isn’t going to happen. 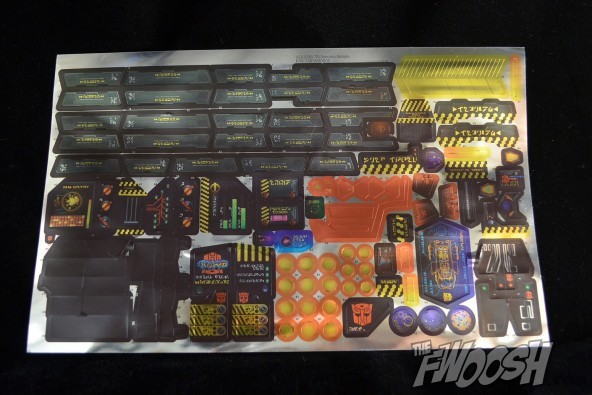 The sticker sheet is also huge with over 100 stickers to be applied to Metroplex. The stickers for this version are metallic, which I assume is intended to match the chrome elements of the figure. It took me about three hours to apply them all, and the instruction sheet really wasn’t as helpful as it could have been. I actually had to consult the Internet a few times because the instructions made no sense. It was fun putting them all on, but I don’t think I ever want to do that again. If you’re a fan of stickers AND Transformers, then, cousin, is this set ever for you. 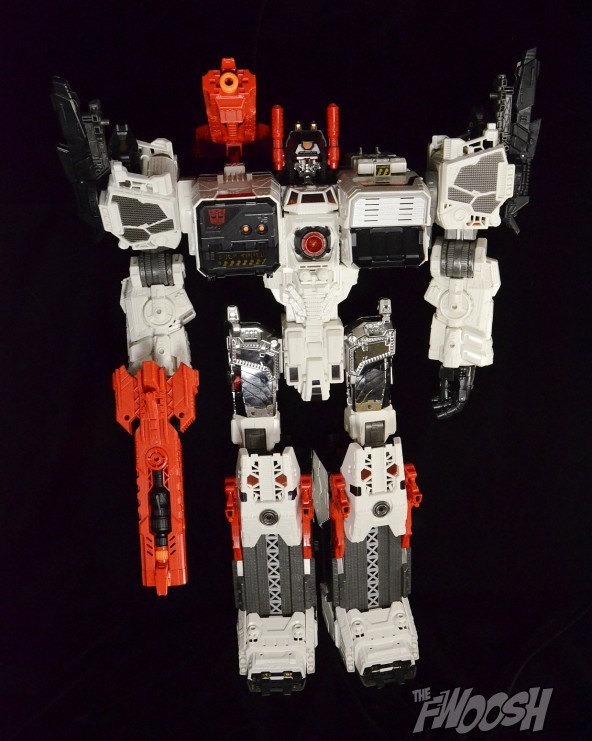 The key differences between this version and the retail version are the chrome on his face and his upper legs, and the fact that he comes with two giant red guns as opposed to the retail version’s lone red gun. I’m a fan of the two guns because I like to have one mounted on his shoulder and one in his hand because I just think it looks cool and it makes sense to me that Metroplex should have loads of firepower. Still, these differences aren’t earth-shattering or anything, but they are stylistic differences that appeal to me, and they make this version worth the bother.

I have a love/hate relationship with the chrome on his face, but I do mostly love it. On one hand, I think it’s awesome because it definitely breaks up all the white plastic, and it really draws the eye to his head/face because it’s so sharp, but, on the other hand, it bothers me a bit because it does obscure the details of the sculpt somewhat. It’s difficult to make out his facial features unless you’re looking at it from a good angle because the chrome is busy reflecting everything in the room. A simpler silver paint may have been more effective here, but I am a sucker for chrome and I do like it. And I definitely like the chrome on his legs because otherwise it would be just too much stark white plastic for me. The chrome breaks that up nicely and I think it just looks cool.

Another difference between the two sets is this version comes with all these little in-scale mini-figures that are about two inches tall. There are 12 in all, but they aren’t 12 unique characters, mind you. What you’re getting is ‘bot modes and alt modes for 6 characters. And they’re color-coded according to faction: the Autobots are red and the Decepticons are purple — makes sense, right?

The designs for each are based on the IDW deluxe-class figures that are hitting stores right now (except Starscream who was released last year as part of a Fall of Cybertron wave). The sculpts of these little guys are highly detailed, so it seems like kind of a waste for them to be unpainted like they are. Some paint could definitely being out a lot of the detail, so that may be a project for those of you who like to paint/customize your figures. I’m still trying to decide if I want to go through the trouble.

There’s no articulation to these guys, so all you’re getting is a bunch of little red and purple statues made of a very soft, almost rubbery plastic. Normally, something like this would go straight in a plastic bag that would then go straight in the drawer, but they look so cool when set up in action on Metroplex’s aircraft carrier mode that I may keep them in the display. And they’d look even better with a little bit of paint applied. 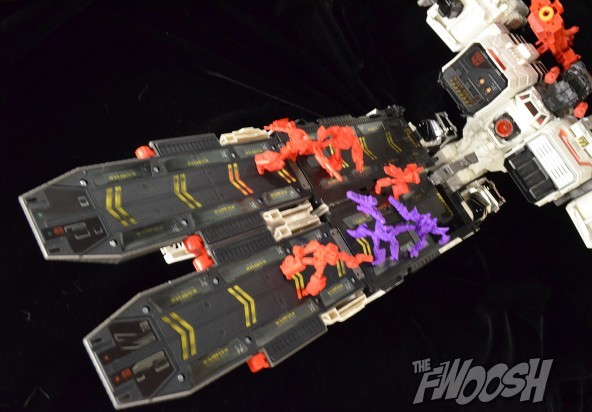 As far as getting your hands on this guy goes, he was available at the con, and he was available on Hasbrotoyshop.com along with most of Hasbro’s other SDCC exclusives, but he was one of the fastest items to sell out and was gone in just a few minutes (right after Boba Fett). I was able to catch him the second time he was listed (8/5), but, again, he sold out incredibly fast. The listing is still up, so there is still a chance he will be made available for sale a third time, so keep watching the site if you’re interested in one. Also, be aware that this version is more expensive — he runs about $150 + shipping.

That’s if you really want this version, that is. Getting the retail version will be much easier, so that may be the better way to go. And since none of the differences are all that major, it’s definitely going to come down to personal preference. Personally, I’m glad I went after this version because I’m fond of all the extra bells and whistles it comes with, but I can also see someone else not caring about this stuff at all. The chrome does look pretty sweet on my shelf from across the room, though, so I do have to say I love it, but your mileage may vary.