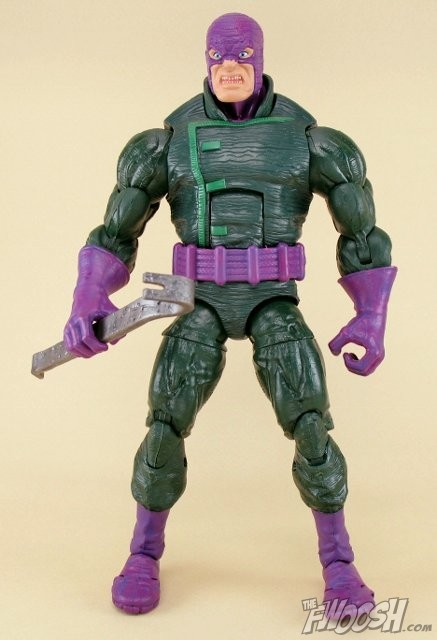 The Wrecker is  a long, long overdue figure that finally makes his debut over ten years after the start of the Marvel Legends line. With his debut, the Wrecking Crew is now 3/4ths of the way through to completion. Unfortunately, the final member, Bulldozer, has run into a bit of a snafu. With the loss of running changes that previously hit the neo-classic Hawkeye, the last member of the Wrecking Crew — supposedly a running change to Wrecker here — has an uncertain future. I have no doubt that he will pop up somewhere down the road, and it’s not like the running changes idea has been working swimmingly so far, so maybe it’s for the best. 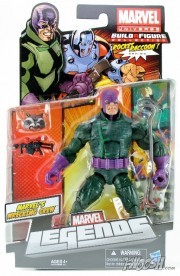 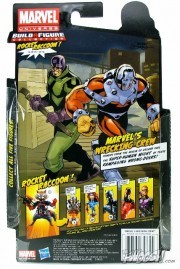 But that’s a problem for the future. Right now, let’s take a look at one more addition to the most bittersweet team yet. 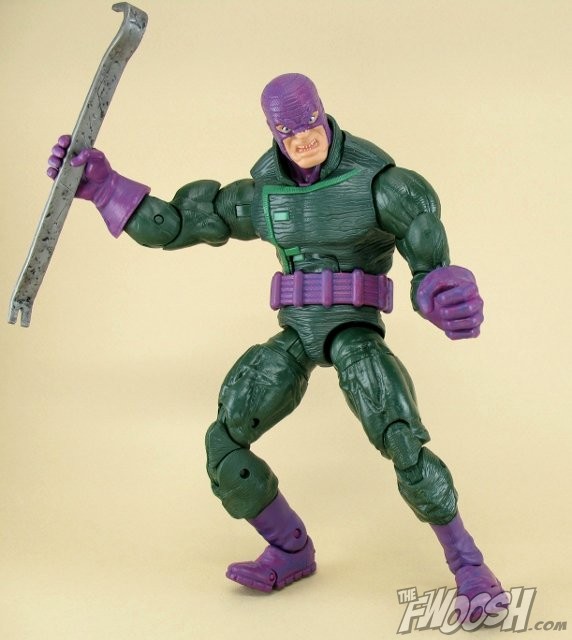 Bittersweet, I says? Yeah, that’s it in a nutshell. See, while I and many others have been waiting and hoping for what seems like forever for this group to find a home in the Legends line, their arrival has been met with much angst. It’s all a matter of opinion, of course, but I’m already ready for a redo, and all four members haven’t even arrived yet. Gasp, I know. I take cold solace in  the fact that I’m not the only one who has this opinion, but there’s nothing that can be done about it, and I know for sure this is a team that gets one shot. 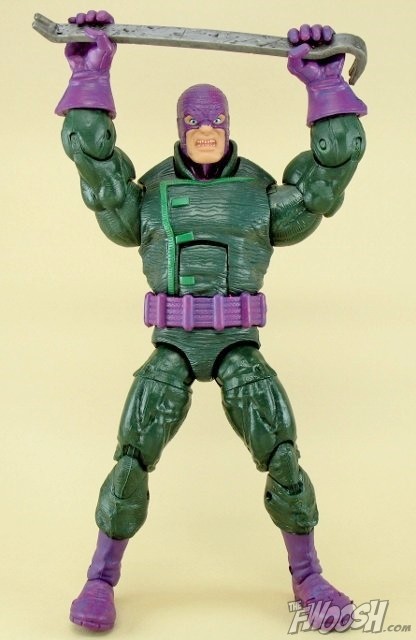 When I look at my Hyperion or Luke Cage figure, and I can’t help but think how that body would have been much, much better: strong and beefy without seeming over-the-top. And I know the Hasbro team feels the same way. While it’s been said repeatedly that they’ve been portrayed as larger in recent years, well, I’ll just go ahead and say it: this notion that “strong guys have to be gigantic” strikes me as short-sighted and too obvious. If just one member of the Wrecking Crew is the size of a bus, why would there have to be four of them? And how would a team of four absolutely ginormous, super-strong guys not take over an entire city and beat the Avengers into pudding? Because Thor, I guess.

I won’t be changing the minds of anybody who’s fine with their size or those who think they look “imposing on a shelf,” but I wonder how many people would be wishing they were bigger had they been done on a more size-appropriate body? Maybe less than would have wished they were smaller. Who knows? 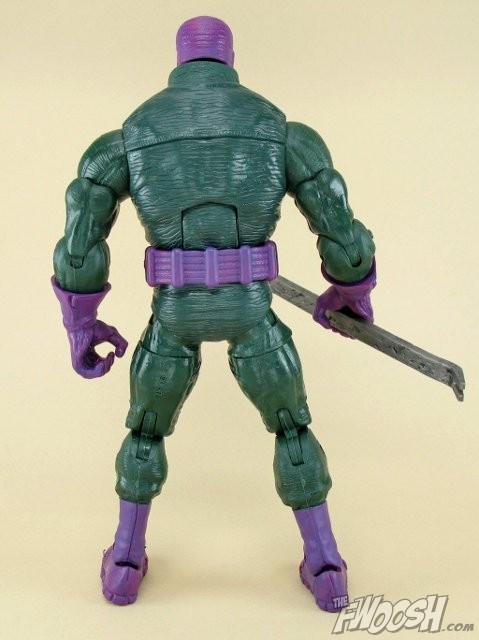 So my review and my vision of the figure is at the beginning colored by my bias in this regard.

As to the figure itself (and to end the redundant sermonizing), he features some alterations to the bodies that the previous Crew have arrived on. Instead of just painting on the chest details,  they’ve opted to provide him with a brand-new torso with collar and texture and everything. This new torso adds some height to his frame, so he ends up being just a little taller than the other Crew members. I won’t be crying over the loss of the torso Piledriver and Thunderball shared. With each new part, the body at least regains a little bit more aesthetic clarity and symmetry, though it still remains by far my least favorite of the bodies that Hasbro is currently using. The origins of this body go all the way back to Hulkling, I think, though so much has been altered here, and there they may as well have gone back and just made a brand-new body slightly bigger than Hyperion. There’s been too much bastardization over the years, and it doesn’t look like ankles can fit in those boots. 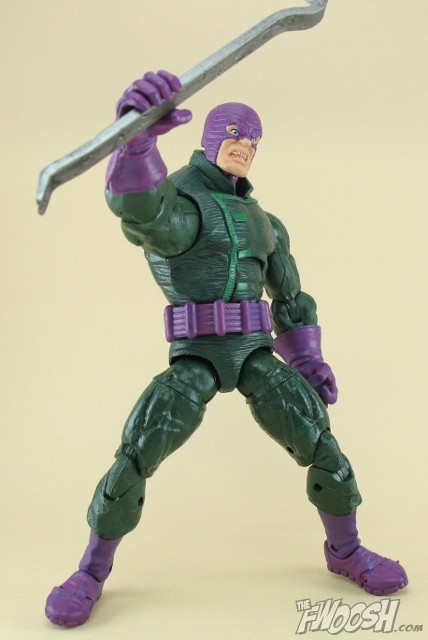 The head sculpts have been the best thing about this version of the Crew. The Wrecker, from a head sculpt perspective, looks suitably bad-ass, mad, and pissed. The paint is fairly hit or miss, and his teeth have been painted rather shoddily, which ends up looking like somebody stapled some Chiclets inside his mouth and called it a day. There’s a good row of teeth sculpted in there, but wow, dot dot move on for whoever was in charge of the white paint.

Is it silly to say my favorite part is the crowbar? Probably, but it is. I like his crowbar. It has a dented, pitted quality that looks like it’s clanged against Thor’s helmet or Iron man’s armor several times. 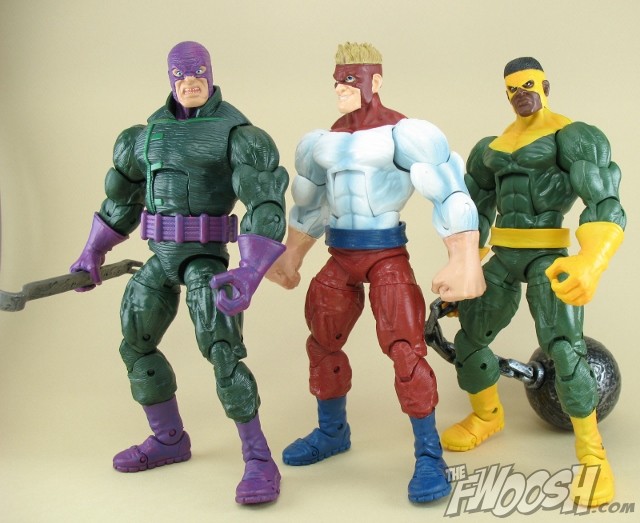 I know it seems like I’m ragging on him, and I may be, but it is a nice, fun toy. He looks great up against the previous (oversized) Hasbro Thor from a sizing perspective, and if you’re of the mindset that the Crew should be huge, then they look good up against more normal-sized guys like Iron Man. Hell, gather up an army of Avengers and they still would probably seem outmatched by these guys. So there’s that. They look like they could take the fight to Galactus himself if they wanted. Wrecker, being slightly larger than the others, works for that “alpha dog” aspect. You’ve got to be an A-number-1 bad-ass to corral a group like the Crew into obeying you, and the Wrecker fits that bill. So just because it’s not my ideal version of the Wrecker doesn’t mean it (or they) aren’t somebody’s. It is great for them to finally get some recognition, and hopefully Bulldozer doesn’t sit in the waiting room for the doctor to remember him for too long before he’s nudged into a spot.  I’m just left wishing they had gotten a bit more consideration to go with their recognition.

Overall, Wrecker is a fun toy that just isn’t the Wrecker I wanted, and he doesn’t replace the 4-inch MU Wrecker as my favorite version, painted details and all.