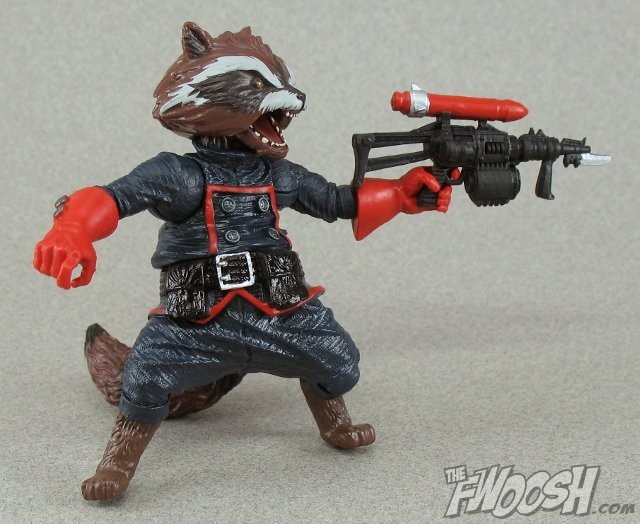 Rocket Raccoon continues the 2013 trend for pint-sized Build-A-Figures started by Hit-Monkey and ending with the upcoming Puck figure. 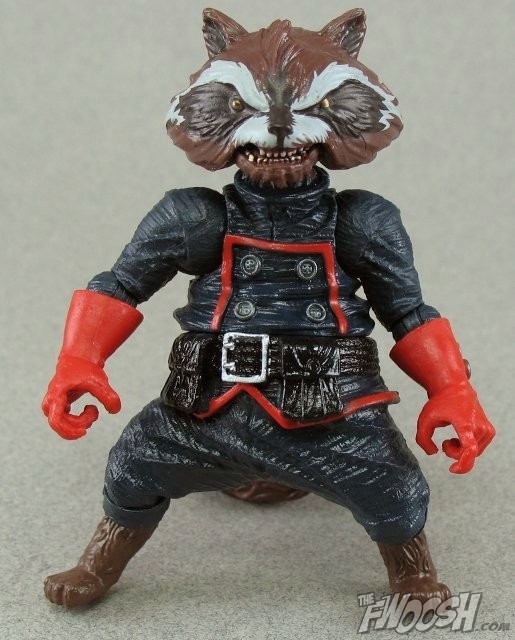 Rocket Raccoon made his comic debut way back in the early ’80s in the pages of The Incredible Hulk before being granted his own four-issue mini-series written by Bill Mantlo and drawn by Mike Mignola, of Hellboy fame.  A unique creation in a unique story, for a long while that was the height of Rocket’s popularity, and many assumed that he was consigned to comic oblivion: filed, faded, forgotten. But fun concepts never truly die, and all it took was a little bit of imagination and love to dust off the concept and inject him into an excellent story. Enter the Guardians of the Galaxy. Rocket gained a second chance at the brass ring, and he will be one of the stars of a major motion picture next year — that’s wacky. 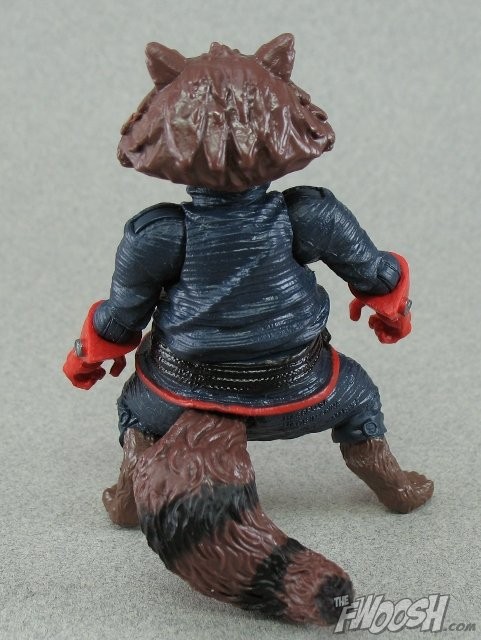 It’s amazing where fate leads you. I’ve always had a soft spot for the Raccoon, and I have been extremely happy that he’s enjoyed a career renaissance in the past few years. All it takes is creativity to make legions of fans wake up and realize the potential in any character, big or small. It’s a true Cinderella story… or something like that. I doubt anybody ever believed there would be something called a “Rocket Raccon wave” back when Toy Biz first orchestrated the BAF concept. But here we are, living it. How peculiar. 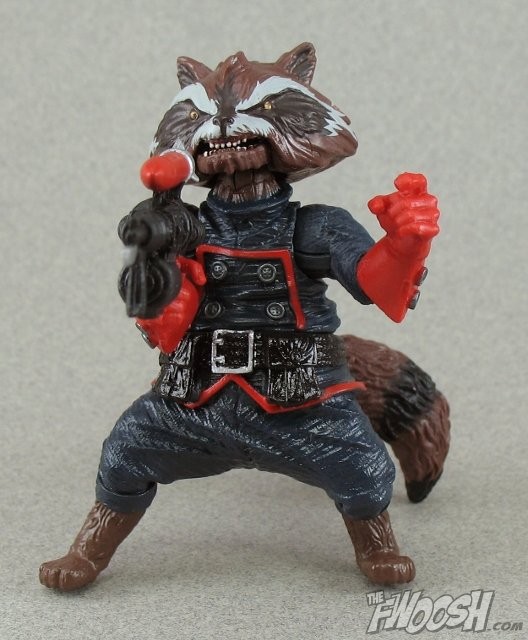 Rocket himself lies in that realm of being a half-and-half figure. He’s half fun and half quasi-disappointing. While he’s leagues better than the glorified statue the MU figure was, Rocket, unfortunately, remains a statue from the waist down. I can already hear the chorus of people saying, “How much articulation do you need in someone like him,” but it’s too late; I already have my fingers in my ears to block that noise out. As I’ve said many times, I need articulation in my super-articulated figures. In such a small figure, I really feel the lack of articulation from the waist down. Since he’s got a tail to give him a little tripod action help in his posing (due to the tiny widdle feet), having a decent ball hip setup — even without knees — would have been super cool. He’s got a surprisingly good range of motion in his arms and shoulders, and he can aim and fire his gun in any direction he wishes, but those legs… so static. I can’t help it. I always want more. I guess that’s where the budget cuts went in this wave. 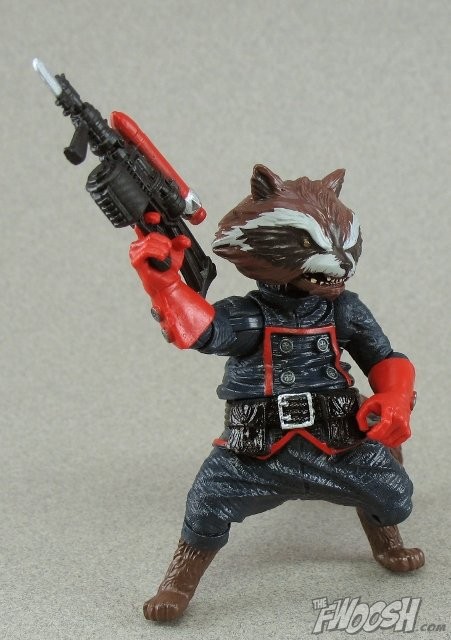 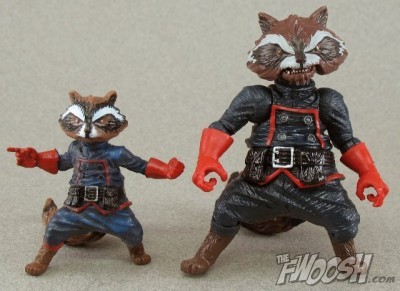 Sculpt-wise, he looks great. Initially I was ready to point out that he’s not an upscaled version of the MU figure, but matching up clothing wrinkles and such, it seems clear he’s a larger version of the smaller figure with added textural details that the little one didn’t have, with the torso altered to provide superior arm-ticulation. So maybe he is “upscaled,” however that’s done nowadays. I’m assuming he was a digital sculpt. 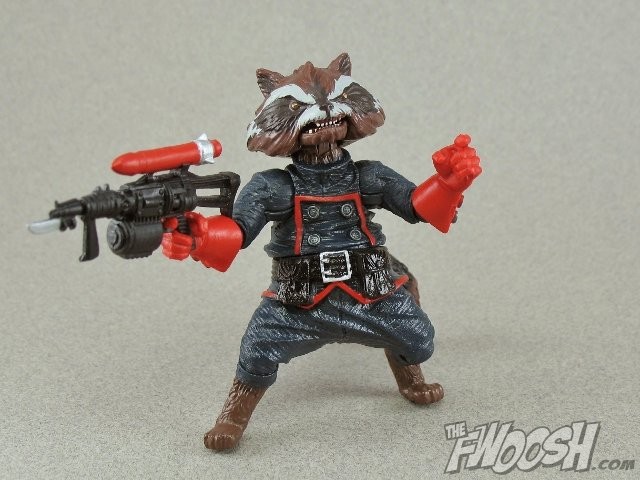 Since arm articulation is the highlight, he is well-articulated in that area. He has the Hasbro-styled elbow (of course) and two trigger hands so he can hold weapons in each hand, which is perfect. There’s a lot of clearance in the joints. Additionally, he spins at the glove cuffs, and he does have a waist swivel, so there’s that. As I said, above the waist he’s got a decent amount for how small he is. His tail is ball-jointed and fully poseable to facilitate keeping him balanced. Due to tiny widdle feet. 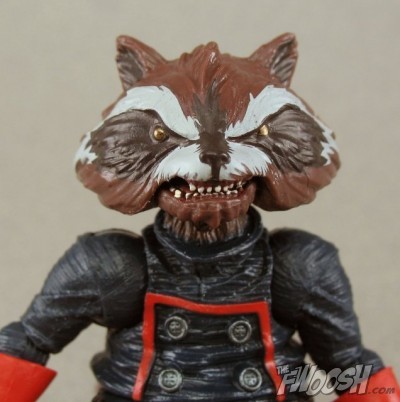 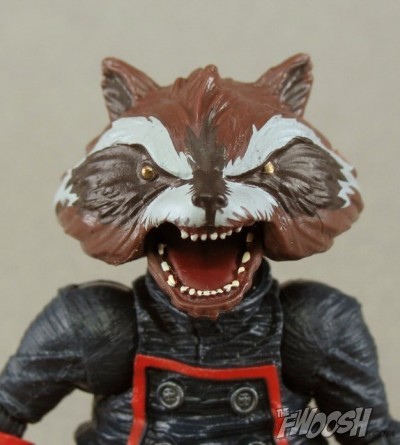 Rocket has another bonus his smaller figure didn’t get: articulated jaw. I love this aspect of figures when it’s appropriate and can be pulled off well, and it works great for Rocket. It adds a lot of character to his face and with zero articulation from the waist down, he needs all he can get from the waist up. 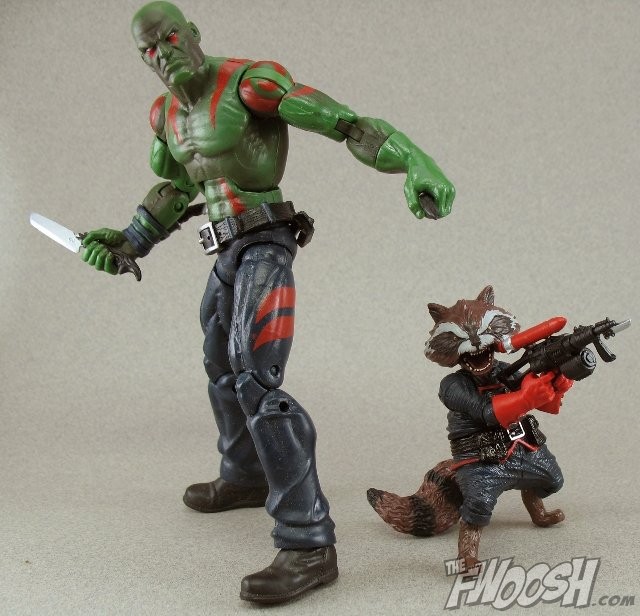 So far Rocket and Drax are the only two members of the Guardians we have. Starlord was announced back at SDCC, and with a movie coming, it’s a guarantee that there will be more on the way, it’ll just take some time to fatten up the ranks. Since they have this mold, I’d like to see Rocket put out in his classic colors, even if it’s not technically completely accurate, it would be a nice thing to throw in down the line. But I’m not holding my breath for that.

It’s great to have a character as unique as Rocket Raccoon getting the plastic treatment, even if there are some deficiencies in the final product; it gives me hope that all/any of the more unusual characters need is a bit of attention, and they, too, can be the stars of their own wave.