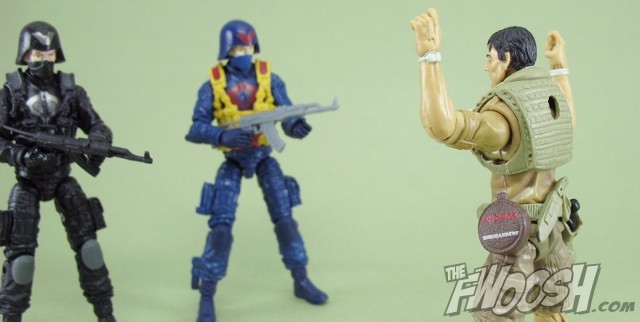 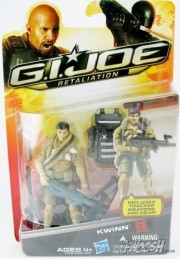 Kwinn represents a holy grail to me as a devotee of the original ’80s GI Joe comics written primarily by Larry Hama. I could (and probably have) go on and on about the influence the GI Joe comics made on my vision of the property, but I’ll leave it brief and say that more than the cartoon; my Joe world was more in line with Hama’s vision. 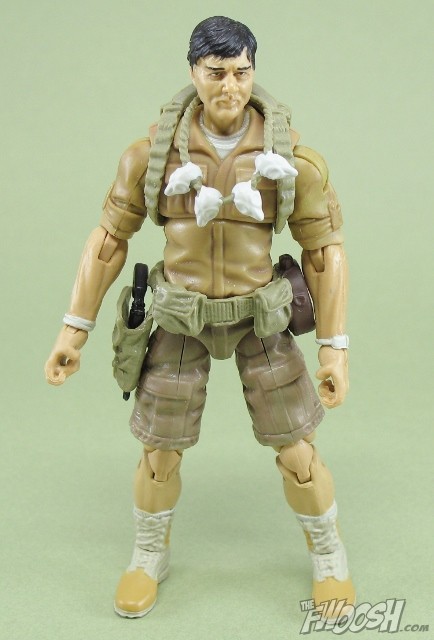 Being a toy tie-in line, Hama worked under obvious restrictions about what he could or could not do with the characters, and what character or toy he needed to promote next. So every so often he would throw in a character whose story arc he was in complete control of. I’d imagine it was very liberating to have these “free” characters roaming about that would live or die not by the whims of their popularity as a toy, but in service of an actual story.  Kwinn was one of those characters, and though his time in the comic series was brief, Hama made him a fully-rounded character that was just as important and real as those represented in plastic at the local department store. 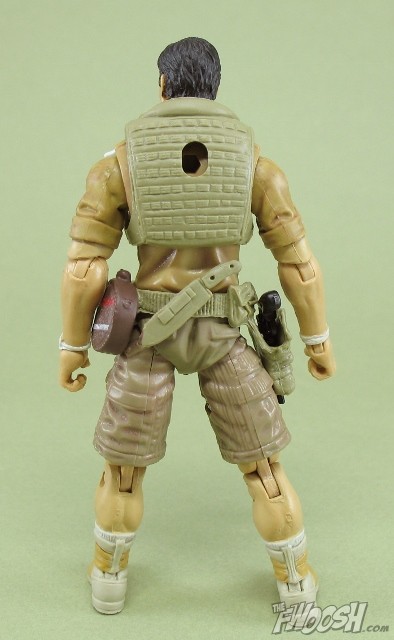 Kwinn debuted in full arctic clothing in issue #2 of the series, but he would return several issues later in what became his signature outfit, and the one finally immortalized in plastic with this figure. He received a figure in 2004 but this is the first figure of the outfit he wore most often. 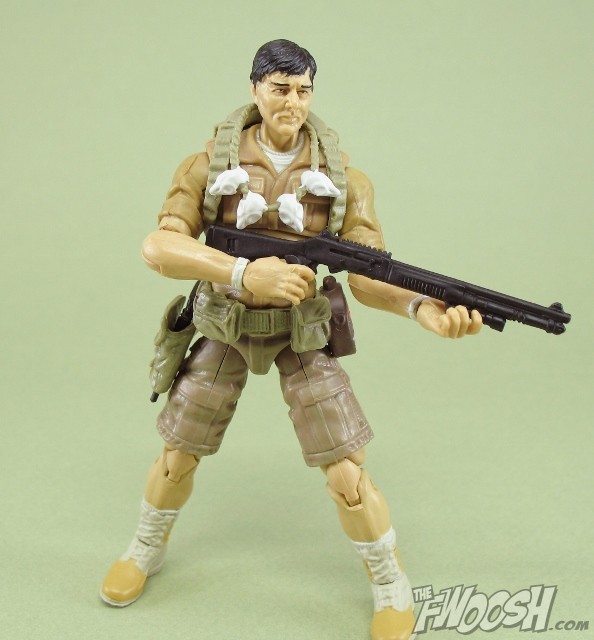 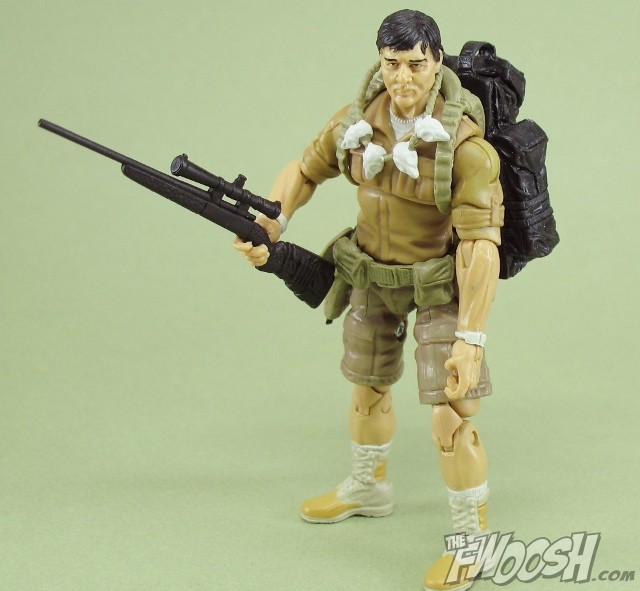 Kwinn was a contradiction as a character. He was a zen mercenary who spoke eloquently of man’s capacity for evil — the weasel spirit inside us all — but was himself capable of violence and evil in vast quantities. His awareness of his own weaknesses made for an entertaining journey as he found a mirrored soul in Snake Eyes, one who also struggled with the duality of the journey for peace while steeped in violence. Snake Eyes and Kwinn bonded throughout their shared adventure, and the respect between the giant and the shadow played out over the page. He was loyal, honest, and operated with an unflinching moral code that a man like Snake Eyes respected. 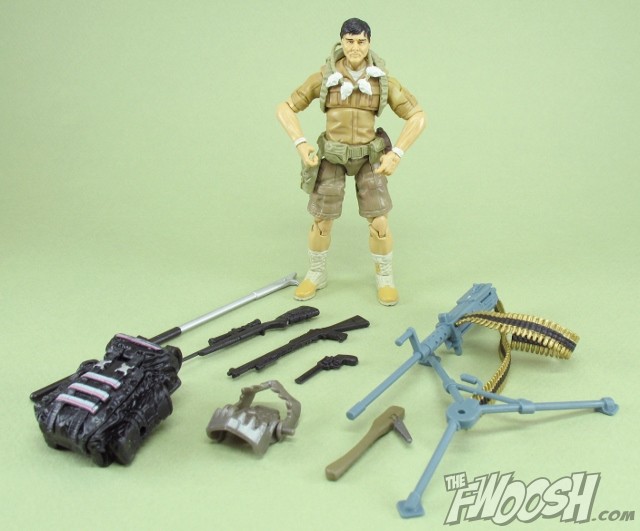 Kwinn’s figure comes buried with accessories. Though the price continues increasing, GI Joes still remain one of the most accessorized lines out there. Kwinn comes with a backpack, a pistol, a .50 caliber Machine gun and tripod, two ammo belts, rifle, a shotgun, a spear, a bear trap(!), and a few mountain climbing thingamabobs. I’m assuming that’s what they’re for, anything else would require research. That is a lot of accessories, most of which he never had in the comic, but are all something he would need as a highly paid, highly trained mercenary tracker bad-ass mofo. In fact, the one thing he doesn’t have is his signature .30 caliber machine gun, which was significantly smaller than the .50 caliber one he comes with. I’m assuming what he came with was supposed to be representational of it, but it’s very large, while the one he used in the comic was noticeably smaller. Probably a major nitpick, but it stands out to me.

Not mentioned above, but his most important accessory, is his weasel-skull necklace. It wouldn’t be Kwinn without it. 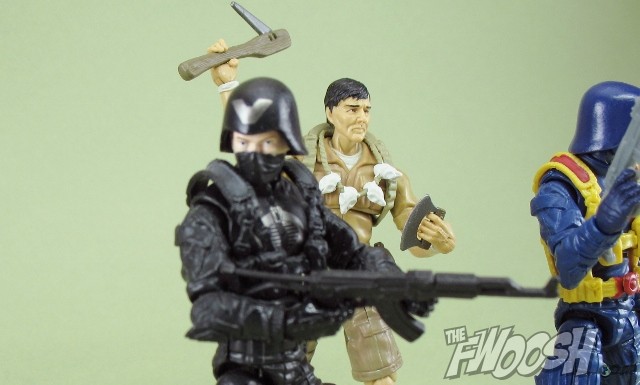 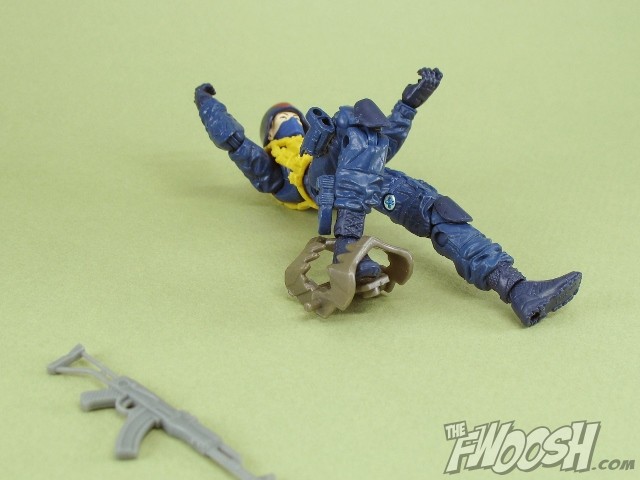 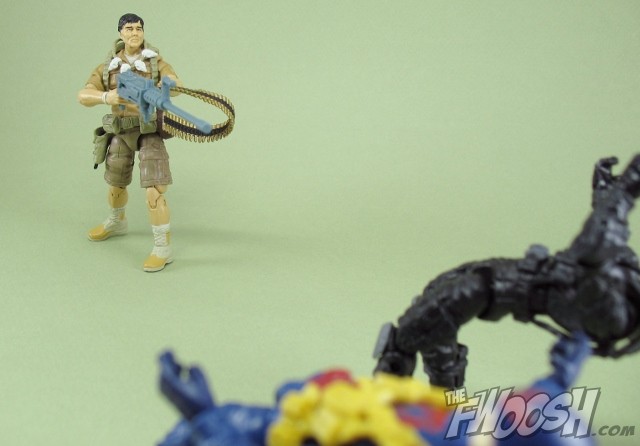 Kwinn has some newly sculpted parts like cargo jeans and boots to capture his look just right. While his figure doesn’t completely tower over other figures like the mammoth comic Kwinn did, the added bulk of some of the new parts give the illusion of a larger size, so it’ll have to do. Comic Kwinn was a brute, so the smaller-than-expected size is jarring, but I’m too caught up in the sheen of finally having this version in my hands to whine about it much. I’m not 100 percent sold on the head. It seems a little off-model to me, but I suppose it works on this slightly smaller body. It looks like somebody, I just can’t place who. 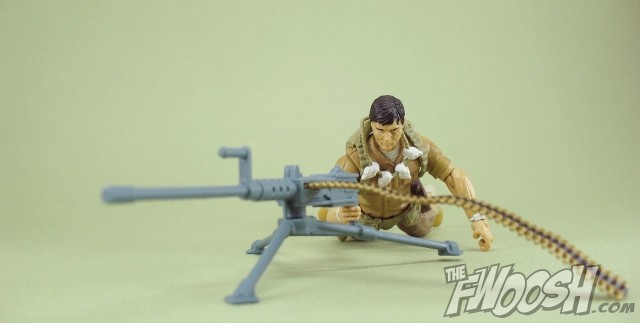 Kwinn has a nice range of motion in most areas. Like many Joes, his ankles are the biggest problem. Though there is a joint there but it’s not very functional, so some poses require precise balance to pull off well. On the other hand, he’s got some great wrist articulation that allows him to hold his weapons far, far better than some of the older figures. 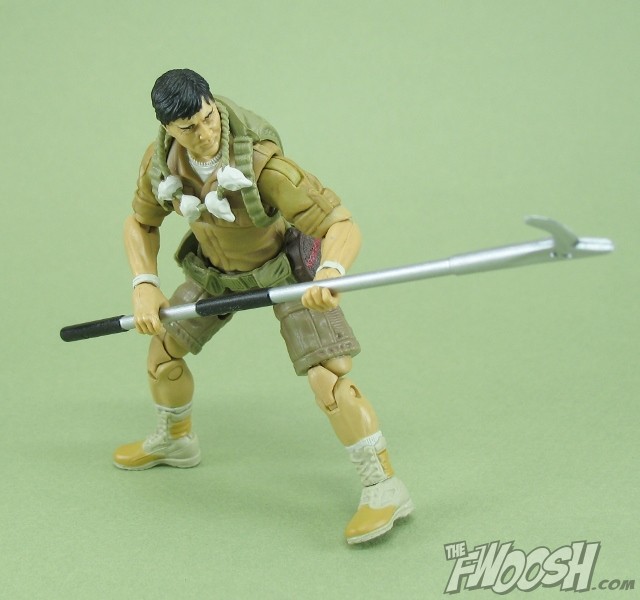 I know a Dr. Venom figure was released, but that was a fairly difficult figure to get, so I’m hoping they release him again in some venue down the road. Kwinn, Venom, and Snake-Eyes need to have a little reunion. Maybe Kwinn can carve the weasel spirit out of Venom’s gut like he promised. 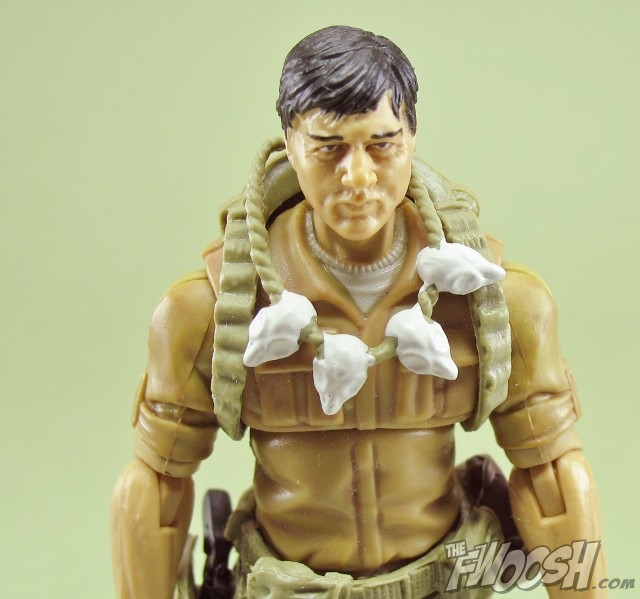 So yeah, after getting shoved around for years, Kwinn finally earned his place at the table, and the collection feels that more complete with him. If you haven’t read the early issues of GI Joe with the adventures of Kwinn, Dr. Venom, Scar-Face, Snake Eyes and all the intrigue within, do yourself a favor and seek them out. You won’t be sorry. 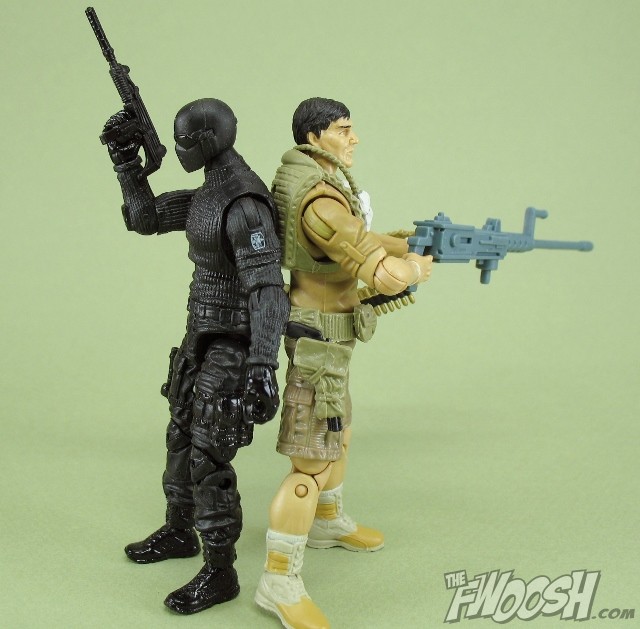