Our final Masters First Look for this round comes on the last full day that the 2014 Matty Collector subscriptions are up for sale. It is getting down to the wire, but neither of the subs are quite there yet, so if you are waiting until the literal eleventh hour, go on over and lock in for next year. Recently we have shown you what we can still get in the subs with the likes of Batros, Castaspella, Shokoti, Nepthu, and the very impressive Mantenna, but today’s focus is on what we can get outside of the subs if we move forward. MOTUC has had a couple of iterations of figure stands, but these new Stackable Stands work a little differently than those that have come before. I can already tell that they are not going to be for everyone, but if you display lends itself to their style, the figures can look very nice standing on them.

I think that the pictures will say more about these than anything, but I wanted to quickly go over some of the important points about these.

First, they are (obviously) designed around having a couple of different levels to display your figures, and, in the end, they do resemble an awards platform as suggested countless times on the vast Internets. So I think a lot of people will subconsciously be drawn to display their favorite of the most “important” character in the middle. While approximate, these stands measure about 12 inches across and are 2.5 inches deep. The center display is 2 inches high and the side displays are 1 inch high. The heights do give some variance, but, in the end, I think the middle platform could have been a little taller to really stand out from the other two, but that is personal preference.

These are colored to resemble Castle Grayskull, but their tight geometric angles make them looks polished and man-made, unlike the traditional stone of the castle. I do like the stone detail on them, and there is some nice airbrushing in the crevices to highlight the different rock shapes. There is a half-inch lip that runs around the entire length of the stands that adds to the dais feel, but since the sides are cut so they are 90 degrees to the ground instead of on a bias, you will be able to place these flush against each other as they run in a line. I think this is going to be the optimal display option for these. I realize that most people probably do not display their figures one deep and in a line, but if you do, I really think that these stands will be for you. Placing them next to each other, or even stacking them in staggered fashion down a line, looks really clean. It will bring some formal touches to your muscle men for sure, so if you like clean and organized displays and have room to run them in a line, I think these will be great. 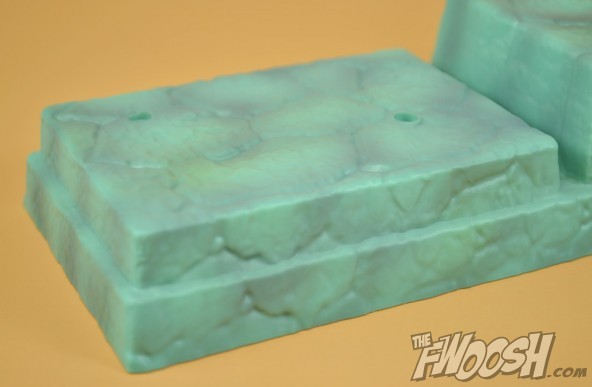 Unfortunately, if you are planning on stacking these front to back, you are going to need several of them to pull off the look. Placing one stand in front of two stands that have been stacked doesn’t really give you enough height variance to make the display work properly. The figures on the front row are going to mostly block those in the back, and since most MOTUC figures are right at about the same height, there is not really any good way to compartmentalize who goes in front and who will stand behind. The same can be said if you place a figure on your shelf in front of a single level stand. So, if you are going to go front to back, you are going to need a lot of sets to give you the difference in height on each row to look good. Or you will need risers under them, but that kind of defeats the purpose in the first place. So go long instead of deep with them.

The one thing that has been pretty universally chided about these is that they do make use of the same peg system as the previous stands. I call this a case of the best laid plans falling short of full functionality. It is nice that Mattel made the pegs moveable and interchangeable, but the pegs are just not strong enough to support a figure that needs the assistance to stay standing. For one, they are too short so they don’t go far enough into the foot hole to really help support the figure. So if these pegs brought your ire before, it will be the same here. I will say that these are nice and level, so figures that can stand fine on their own will not need the help of any pegs on these stands. 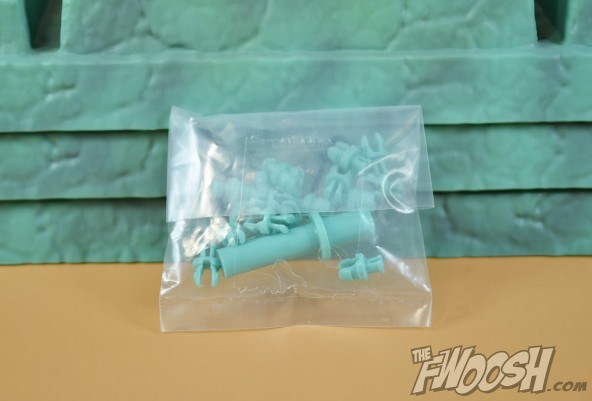 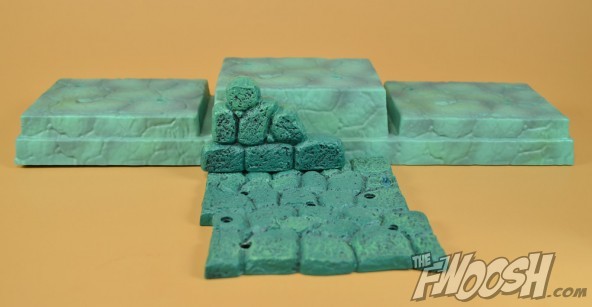 Overall, I would say these are okay display stands. They are not a home run simply because they will not be able to give a nice-looking display if you intend to stack them front to back, at least not without buying A LOT of sets; however, if you display one figure deep and run in a line, these could really clean up your display. My personal display doesn’t lend itself to these, but I think I will be able to find some groups that might be able to take advantage of them. I have all three versions of Vykron displayed as different characters, and since they have a gladiator background, the design will lend itself well. They might look good displaying He-Men of years past too, sort of like a tribute display.

These will be on sale in October on Matty Collector.

*Thanks for checking this out and thanks to Toy Guru for sending them along. Looks for our final preview for this round coming tomorrow!