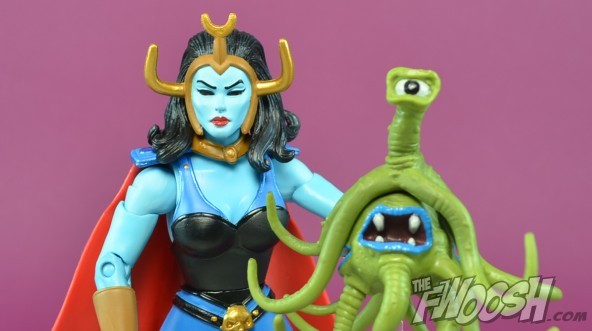 In addition to being “Ladies’ Month” on Matty Collector, August also marks the second month of the all-new Club Filmation series. Since Matthew K did a fantastic photo feature with July’s Icer, this is the first time that I have been able to take a look at a figure from my most anticipated group of characters. Yep, I have been waiting (basically) my entire life to get figures of characters from the Filmation shows, and I am thrilled to see that they got their own mini-subscription to help push the releases. Hopefully that will continue in 2014 and 2015… wink wink, nudge nudge. Matty wasted no time getting right to the very highly demanded character sect, and August brings us one of the most memorable characters from the enter He-Man and the Masters of the Universe series: Shokoti.

Say what you will about the Filmation shows, but they were clearly aimed at their intended demographic of kids of certain age, about 3-5 years old. So when someone tells me that they are “childish,” I usually congratulate them on being highly observant. But for all of us that continue to love the shows we grew up with, it is pretty much the same story. If you don’t care for the old He-Man show because you would call it cheesy, that is your opinion and you are welcome to it, but don’t tell me in the next breath that you still love your episodes of Pokemon and Power Rangers. Same difference, yo. So I will continue to have fond memories of the show, even though I am now almost 30 years past the intended demographic.

However, despite the mostly light-hearted nature of the series, the staring episodes of our First Look subject, “The House of Shokoti” parts I and II, are some of the darkest stories of the entire run. When Shokoti was announced, I went back and re-watched them, and I was really surprised just how frightening some of the scenes could be, even today. Now, Shokoti herself only appears in part II, but the adventures of He-Man, Malaktha, Stanlan, and Ram Man in the first chapter all lead to the pivotal confrontation with witch of the Sands of Time, and it is certainly memorable. That little dink Stanlan gets everyone in a load of trouble, and when Shokoti attacks with her Darklings, it is just great overall storytelling. Kudos to Larry DiTillio for crafting such a memorable story, and I am thrilled that I finally have a Shotoki figure to put on my shelf. 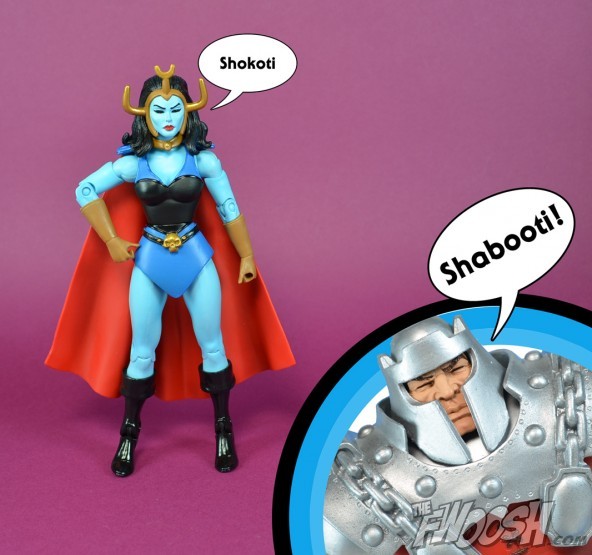 All right, all right, dat’s enough outta you for minute! This is RAM MAN talkin’ and I’m gonna take over for a while since I actually had to meet Shabooti in her creepy dungeon. That Stanlan kid sure did make things harder on us and Malaktha shoulda left him at home. Or at least let Mushroomi have him if he was dumb enough to go chargin’ into her house like dat. Me and He-Man had to tangle with those gross little Darkling guys too. Just seein’ them in plastic make me feel all slimy all over again. I mean, these little figures look just like they did when we was fightin’ ‘em, they even got more than one mouth. Yuck, that is disgusting. He doesn’t move or anything, and she really needs to have more than one, but whatchoo get is just like the real thing. 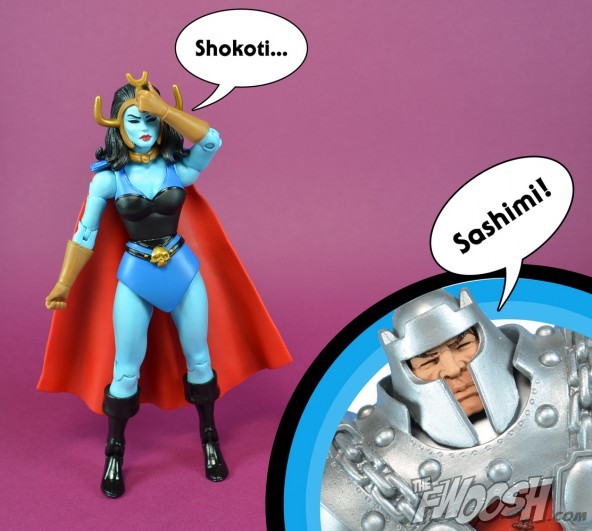 Shapoopy is pretty creppy lookin’ too, if ya ask me. I remember her givin’ me da chills when I first met ‘er and dis figure does the same thing. I mean, how can ya lookit some lady with blue skin and not get the willies? Uh, that just reminds me of Skeletor, but I guess both of ‘em are now Gars like my buddy Sy-Klone. I guess if ya haveta have blue skin, it might as well be nice color of blue and Sashimi’s color is pretty bold if ya ask me. Her eyes will give ya da chills too. I think that is what freaked me out da most when I had to fight her — she has these all black eyes so ya don’t really know what she is thinkin’ until it is almost too late. Her eyes would almost be kinda pretty too if they had colors or something, but no, it feels like she is tryin’ to set you on fire with ‘em. If I had to complain about somethin’ not bein’ right with dis figure of Shabooti, it’s dat she doesn’t have any fangs. Fangs are an important parta her and I remember ‘em pretty well. So yeah, she looks good ‘n’ scary, but I think she woulda had ‘er fangs. 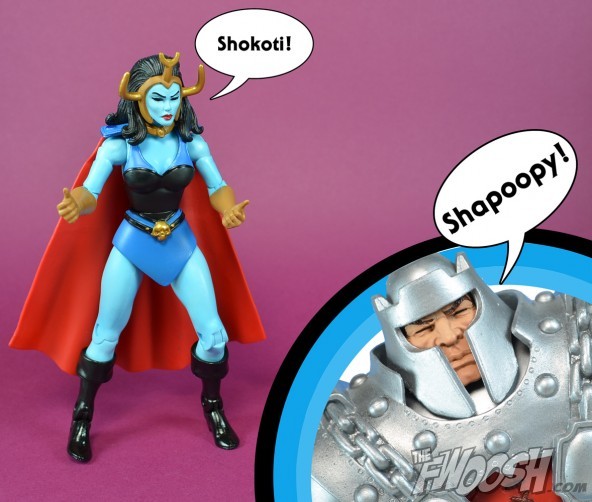 Oh, and Mushroomi also wears some pretty scary-lookin’ clothes. I guess if you’re gonna try ta take over the world with darkness and some nasty guy called the “sleeping beast,” ya gotta have an outfit to match. The clothes kinda remind me of the uniform Adam’s sister Adora wears, especially in the bottom part. The both kinda have this flap goin’ on, but it does allow her legs to move well. She also has a skull she uses fur a belt buckle — I think that is solid fashion choice, especially since she is copyin’ me! It is a golden skull so hit matches the headdress that she wears, but I think she shoulda remembered a pair of sunglasses since light seems to make her vaporize. Her cape is pretty cool too and it would actually look good on a lotta tha Classics ladies, like maybe Teela in her Battle outfit. I like that outfit because– 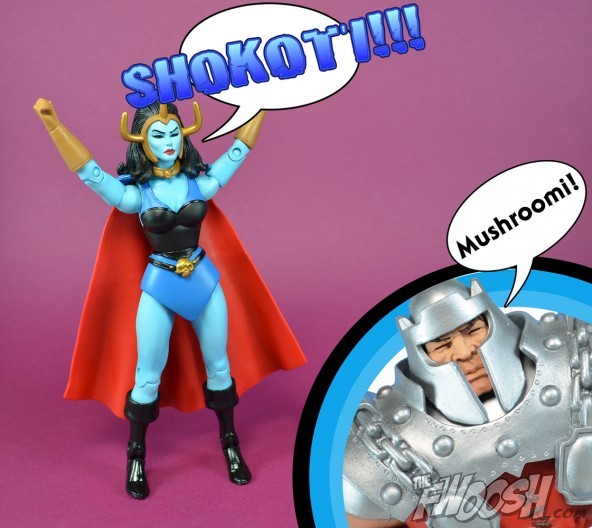 Okay, thanks, Ram Man, I really appreciate your, um, help with this one and I can assure you that your confrontation with SHOKOTI(!) is one for the ages.

So yeah, I think Rammy covered just about everything here, but I do want to mention that Mattel is keeping the quality streak alive with this figure and there is not a significant paint smudge or gummy plastic to harp on. Her right ankle is slightly loose, not as bad as some of the more top-heavy males, but the weight of her cape makes it worth noting. It is so cool to be getting all of these memorable Filmation characters after all this time, and while I am certainly looking forward to getting the fan-voted Huntara (I voted for her), Lord Masque is still very much required for this line so he can get the chance to actually hang out with his Mistress instead of being vaporized before they get to share screen time.

Filmation characters are a big part of the as-yet-unmade cast of Masters of the Universe Classics, so I really hope that the 2014 subscription does go through and that we can get more add-on FilMations subs to help get these characters to plastic. Shabooti, uh, I mean SHOKOTI goes on sale on the 15th at Matty Collector, but if you are looking for something to get before then, hop on over and grab your MOTU and DC subs.

*Thanks again to Toy Guru for sending old Mushroomi along for this advanced look! 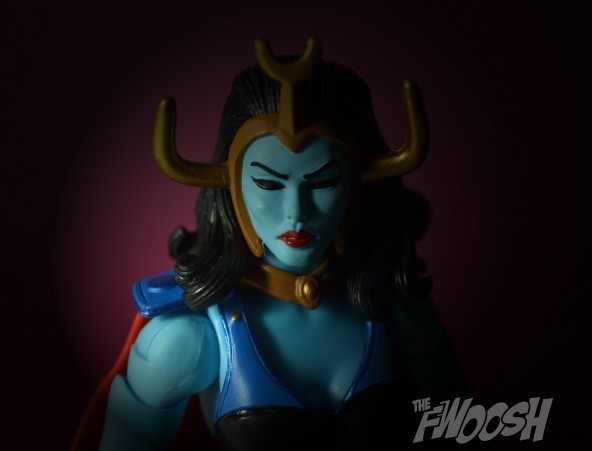