Of all the Doctors, the 8th Doctor had the shortest tenure of them all, at least as far as TV appearances go. In 1996 there was a one-off, made-for-TV feature film that starred Paul McGann as the Doctor and Eric Roberts as the Master, and it definitely was a “made for TV” movie, if you know what I mean. I don’t know what it is about about Eric Roberts, but before taking a turn as a sleazy crime boss in The Dark Knight, his name appearing anywhere near a movie was a guarantee that the movie was going to be, well, we’ll just say “not Oscar-worthy,” and this Doctor Who movie certainly left a lot to be desired. Be that as it may, the movie has its fans, and the 8th Doctor has become something of a cult figure among Doctor Who fans. 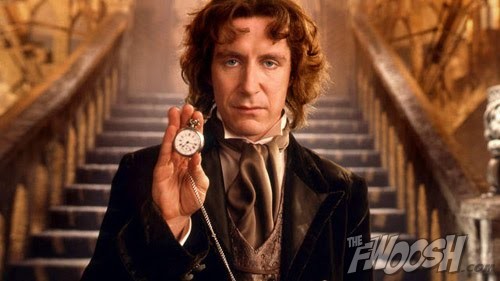 What the movie really had going for it was Paul McGann as the Doctor. McGann was a celebrated British actor who had appeared in movies like the wonderful Withnail and I, with future Doctor Who alum Richard E Grant, and his involvement was enough to pique my interest just enough to seek out the movie, even though I was pretty sure I knew what to expect form it.

It’s also important to note that by the time the movie aired in 1996, Doctor Who had been off the air, effectively dead as a series, since 1989. This movie did not mark an auspicious comeback, to say the least, so the series remained dead until 2005 when it was revived as a TV series with Christopher Eccleston as the Doctor. So we never really got a chance to see Paul McGann really spread his wings and grow into the role as we had with every other actor who played then Doctor. What’s more, ***spoiler alert*** he doesn’t regenerate at the end, so we have no idea what led the 8th Doctor to regenerate into the 9th. The new series started without so much as a reference to McGann’s 8th Doctor; we just had to immediately accept Eccleston as the 9th Doctor, and that was that. It raises a lot of questions that we’re hoping may be addressed later this year with the anniversary episode since there’s reason to believe John Hurt’s Doctor may be the link between 8 and 9. 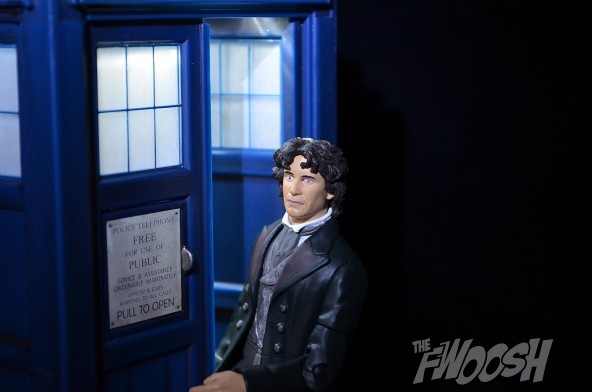 Since McGann’s tenure was so short-lived, he hasn’t received all that much attention from Character Options in terms of toys. All there is, as of this moment, is this one figure that was released as part of the 11-Doctor box set. So if you wanted him, buying this set was the only way to get him. Fortunately for those who missed out on that large set, or for those who didn’t want to buy ten figures just to get one, he’s being reissued with a slightly different deco in a Dalek 2-pack.

I have to say, my fondness for Paul McGann aside, that this is one of the cooler-looking Doctors. To me, he looks like a Doctor Neil Gaiman would have designed had he been calling the shots in ’96.  Something about him strikes me as someone who stepped out of the pages of The Sandman. Naturally, like many of the Doctors, his character and personality as the Doctor is nowhere near as serious as the figure would suggest. Once again, the figure was saddled with a very neutral, almost stern look that doesn’t do very well in conveying the character’s actual personality. 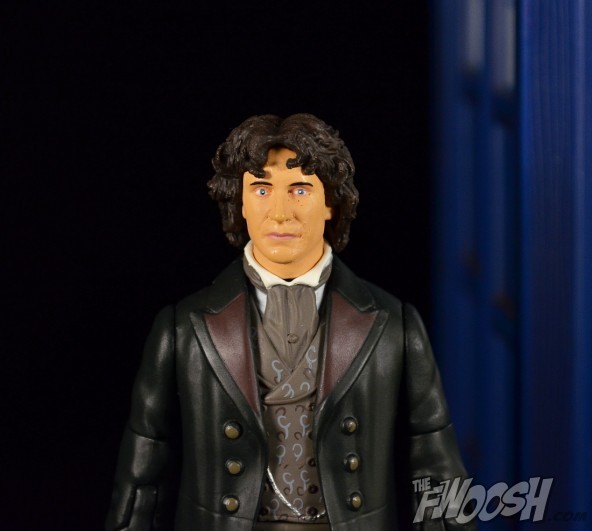 Like all of Character Options’ Doctor Who figures, the sculpt is pretty awesome. There is lots of detail, and the likeness to Paul McGann is strong, but it would seem that they chose to paint his hair a shade or two too dark. That and the placid facial expression are really the only major crits I have with the sculpt and the paint. Otherwise, it’s a handsome figure that represents this incarnation of the Doctor well. 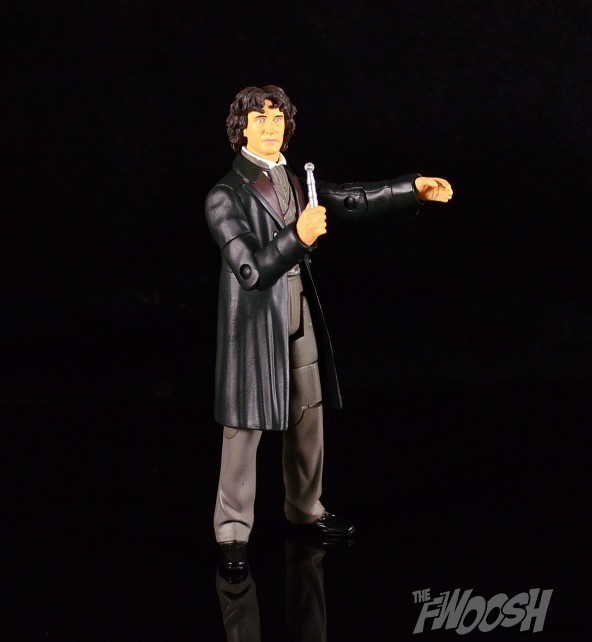 As great as he may look, he’s not much of an “action” figure. Sure, he’s articulated and all, but it’s very difficult to get him into dynamic poses. First of all, his coat hinders the movement of his legs a great deal. It’s nearly impossible to get him into a pose that he can hold and balance himself aside from the standard vanilla pose pictured above. Secondly, his arms aren’t very articulated, particularly his shoulders. There’s no ball joint or anything in the shoulders, so his arm can only spin at that joint. Seeing as how this is the 8th Doctor, however, super dynamic poses aren’t a necessity. It would be cool if he were better articulated, but what he’s got isn’t a deal breaker. 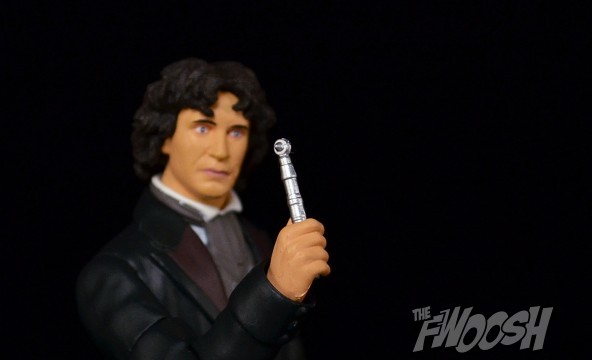 His trusty sonic screwdriver is the only accessory he comes with, and even though earlier incarnations of the Doctor didn’t rely on it as much as the modern Doctors have, it wouldn’t be “the Doctor” unless he came packing one. The design looks very similar to the 3rd and 4th Doctors’ sonic screwdrivers, so that’s one thing that definitely ties in this standalone movie to the earlier TV show. 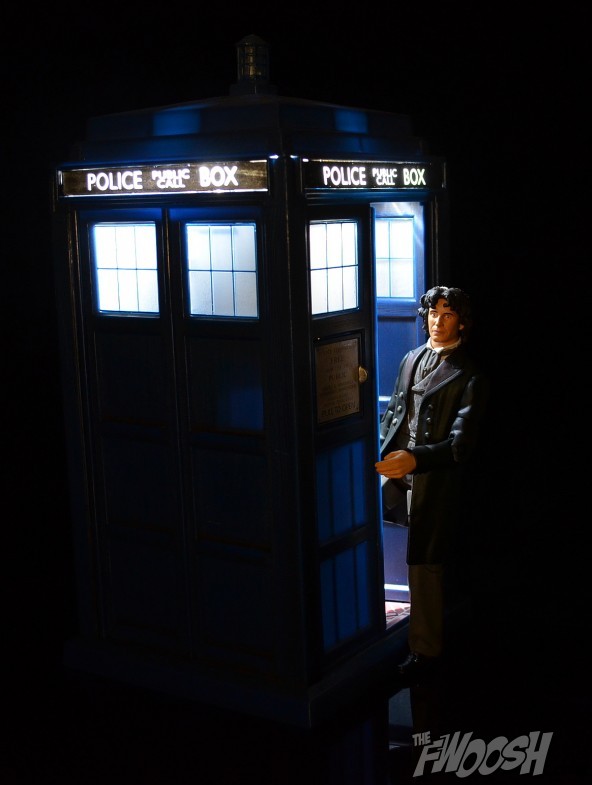 This Doctor is a bit lonely. His companion was never made, and Eric Roberts’ take on the Master has also gone unmade in plastic form. So all he can do is hide out in his TARDIS all alone. 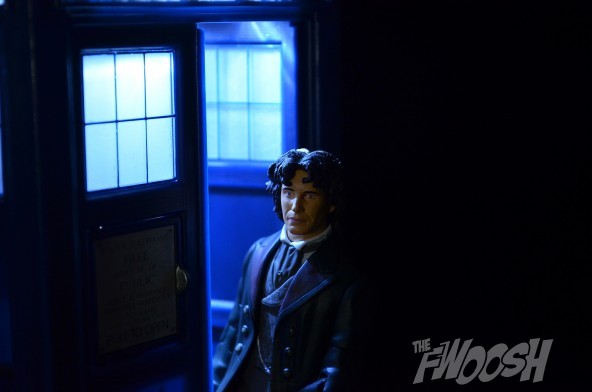 While his movie may not have been all that great, I still think he’s a must-have figure because his look is just awesome. And in addition to the movie, McGann continued to play the Doctor in several audio dramas, like”Blood of the Daleks,” so there technically is more stuff out there featuring McGann as the Doctor besides the TV movie. But as good as some of them are, it never feels as satisfying as the TV series does.

I’d love for McGann to reprise his role, but until that day happens, this figure will have to do.

If you’re interested in picking up an 8th Doctor figure, you can either hit eBay and try your luck with getting this one loose (that’s what I did), or you can wait a bit for the Dalek 2-pack to become available via BigBadToyStore or any other online shop that carries Doctor Who toys.