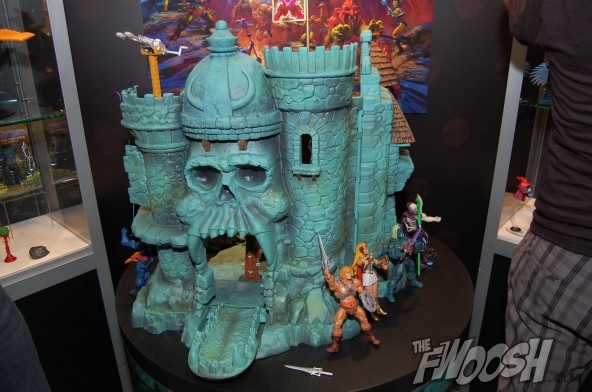 Welcome to Part III of our Comic Conversation with Toy Guru! In this installment we chat about the upcoming Castle Grayskull and wrap up our discussion of all things Masters of the Universe.

VeeBee: Okay, so let’s transition a bit and talk about Castle Grayskull.

Scott Neitlich: Yes! Let’s talk about Castle Grayskull; it’s way too small, right? No, I am joking, but what do you guys think?

VB: Well, seeing it in person for the first time, I can say that I was genuinely impressed with how big it is. I think I was starting to believe the hype that it was not going to be big, but it actually is pretty massive.

Matthew K: Yeah, it is big.

SN: It’s huge! I am blown away by its being called too small.

VB: So what were some of the things that changed between Toy Fair and now? The jaw bridge, but it looks like the floors have been adjusted to allow a lot more head space.

SN: Really the only big differences are the jaw bridge, the keyhole, the slot for the sword, and the base is thicker.

VB: That adds a lot to it, actually, and I really like the big base itself.

SN: Yeah, with the original at Toy Fair, it just didn’t fit right, so with this one, that also has the inner wall relief to carve out a little more room. Other than that, not much else has really changed. It has not changed size, it has not grown or shrunk since we originally showed it.

MK: I think the jaw bridge does a lot.

SN: It does; that definitely helps. 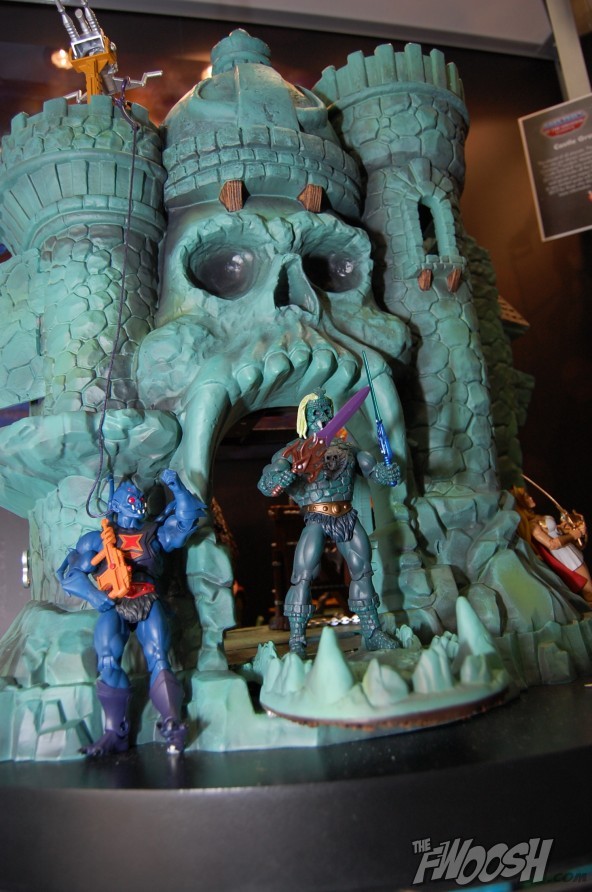 VB: So with the base and everything else, will it still be able to close up and shut like the vintage Castle?

SN: Yeah, the floor piece comes apart in four sections, actually, like a jigsaw. So basically, that all comes off and then yeah, it will close up and there are little latches and it will latch shut, and you can carry it away with the built-in handle.

VB: It looks like the throne worked out too; the Sorceress can sit now.

SN: Yep! And you turn it and that is what activates the trap door.

VB: Now, the box art that you unveiled is amazing.

VB: I love that it will be on the box, but is there any chance of you guys selling it as a poster.

SN: Ah! Well, not right now, but I don’t see how we could NOT sell a poster at some point. Definitely a possibility.

VB: As cool as the Castle is, I am more of a team Skeletor guy, is there any hope for a possible Snake Mountain?

SN: You never know, but there is only so much time, effort and money that can go into the line as a whole. So with anything like playsets, vehicles, weapons packs, they are fun to do, but when they take the finite amount of resources that we have, it leaves less for the figures, and that is what we really want to focus on.

VB: As they should be the focus. 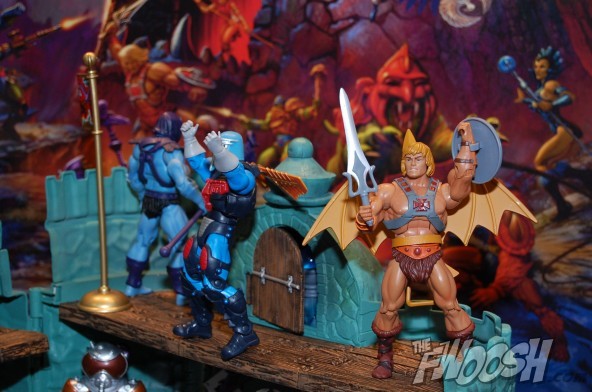 VB: Well, you invoked the Battle Ram, and though we are not getting that, we ARE getting what we are now calling the Jet Sled.

VB: What was the motivation for doing that and pairing it up with the Wind Raider pilot? I think a lot of people are going to want multiples of that.

SN: So if you remember, last year when we sold the sub, if we got more than that, we said it would unlock other items, so this is one of those. We knew we couldn’t do a Battle Ram, but we talked to design and took the front half, which is a vehicle on its own, and paired it with a figure.

VB: Well, Sky High will obviously have to go in the Wind Raider, but the Sky Sleds will be perfect for the Foe Men, maybe, or the Palace Guards. Heck, even Mantenna. I think I want him to do everything now.

SN: He does it all! I actually have a really cool story about him from when I was a kid. 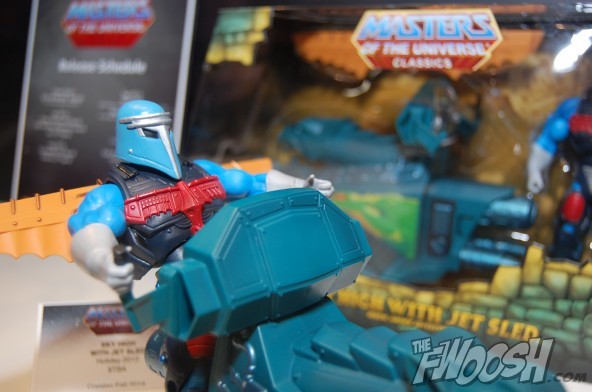 VB: He was my favorite Horde figure when I was a kid. And now that I am not really a kid, he is my favorite again.

SN: Me too! There was one year for Hanukkah where my gift for that night was that my parents said they were going to take me to Toys R Us and you can buy any toy you want. He was the one I choose. Most MOTU figures I got as a kid were gifts, but he was one that I actually picked out. That is a really special memory for me.

VB: So, since you do have an affinity for that specific figure, was there ever a time when you were considering just giving him the “fused” legs like the vintage?

SN: Oh no. It was always going to be four legs. That is the whole point of Classics — you take what started in the vintage line, but you do it with modern articulation, deco, and detail, so the idea of doing fused legs was never a consideration. We were going to do him correctly, or just not do him. So that is why he took a while; we knew he was so highly tooled, those have to really be spaced out.

So this year we had Mantenna that was pretty much fully tooled, the Horde Trooper and.…

SN: How could I not remember Ram Man? So Ram Man was big hit, but the funny thing is that Mantenna was actually not as expensive as Ram Man because he doesn’t have armor, so his torso and things did not cost as much to produce, so that helped a lot. Oh, and believe it or not, the legs were not actually that much more expensive.

So Ram Man still remains the biggie for the year. Even the Horde Trooper because, while he was fully tooled, since we are producing two of them, that helps offset the cost. You have one fully tooled figure and one zero tooled figure.

VB: Well, and down the line there will be a what, like a 20 percent tooled figure…

SN: Right, for General Sunder! Exactly! The cool thing about the Trooper, too, is that you could do, like, camo trooper and shadow trooper and lava reflection trooper.

VB: A slightly different head and you can have one of Admiral Scurvy’s naval troopers.

SN: Right! Just like what you would see with Clone Troopers. Again though, not in the next couple of years, but that is what you might have seen if we would have stayed with the original roadmap. A New York Comic Con exclusive or something. But now, those slots will go to guys like Goat Man. That is the difference.

VB: So let’s say we come to the end of the sub period and all of the sudden 2014 rebounds and sells like mad-

SN: That would be AWESOME!

VB: Would that change any of the perspective for the future? Does that bolster confidence? 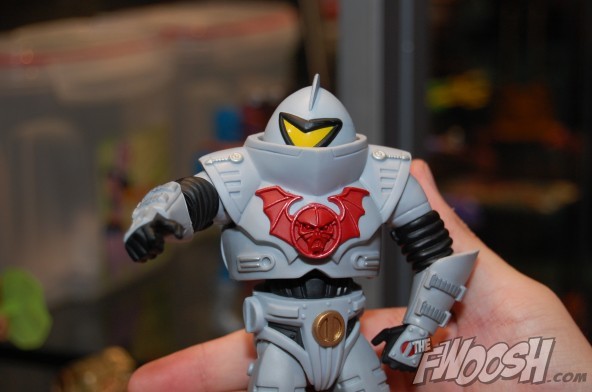 SN: Yeah, we wanted to include it because we knew everyone would want it. With Sky High or Granamyr or the Wind Raider, we knew some people would not want those, so they were outside the sub, but we are confident that everyone is going want this as-yet-unnamed item.

VB: Speaking of unnamed, I will just go there – so what is up with this “Unnamed One”?

SN: You know, he was on the roadmap since 2009 and was always a character that we wanted to get to because he has been a mystery for so long, ever since the Powers of Grayskull comic. So in addition to finishing up the figures, we always want move forward with the story. We don’t want to get to the end of 2015 and leave anything hanging.

So, not only was he a good PR move and a cool figure, we know that fans have made it clear that they love the mystery and surprise figures and things like that. Learning who he is, his origin, and how he fits into the universe will really help to tie a lot of things together. Plus, he comes with a mini-comic. It is just fun and he is an awesome figure. The Horsemen knocked him out of the park. I mean, people are not going to be disappointed with him. He has two swappable heads, some great accessories, and he is almost a 100 percent newly tooled figure.

VB: To be continued until March of 2014. So to wrap up Masters, I wanted to ask about the Mini Masters that are being sold here — how they go along with the iPad game and if this is just the start of something.

SN: Yes! Well, we need to see how the set sells here and on Matty Collector first before we can decide on making a commitment to anything else. If it is big enough, yeah, we would LOVE to finally get these guys out. They are a lot of fun.

VB: Do you see them as a convention item, a Matty item, or maybe even retail?

SN: It could be anything, really. Maybe even a mail-away with a video game code thing. Who knows? But it has been a hit and we are very excited. 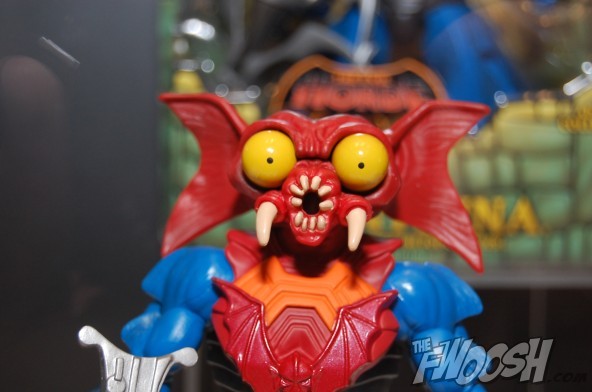 *That is it for this installment. Check back tomorrow as we move to the DC Universe!