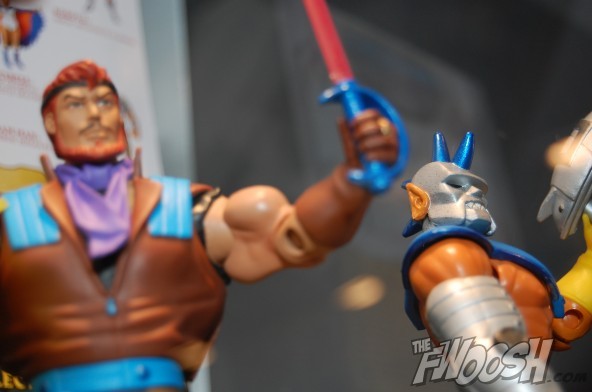 Welcome back! In this portion of our Comic Conversation with Toy Guru, we continue discussing all things Masters of the Universe, and we take the chance to really get into what the future might hold for the Classics line and the brand in general.

VeeBee: So, at this stage, what do you consider to be the number one most important thing to the life of the Masters of the Universe Classics line?

Scott Neitlich: Subscribers. It is like Kickstarter now; it is all about the subscription. This is not 2008 anymore and it is prices and raw material that make something like this tough to do. Even if you look at retail now, the standard is creeping up to the $20.00 mark when just a few years ago it was $8.99 and you got a giant leg of Galactus to go with it. The Star Wars Black line is 20 bucks and there are no build-a-figure components. It affects the entire toy industry so, at this point, we have become completely dependent on subscribers.

VB: Do you see the line getting to be 100% subscription only? Is that something you see as being necessary to sell the minimum amount of required subs?

SN: Well, it could be, eventually. Maybe something like that in 2016, or the day of stock would just be very, very little. You just cannot take that risk. You can’t take inventory risks on this kind of stuff.

VB: So, 2014 and 2015 will be primarily focused on the vintage MOTU, vintage PoP, and the important NA guys?

SN: Yeah, we are not going to be able to get to all of the obscure New Adventures humans during that time. I can tell you right now, Kayo is not in there. So for all of the Kayo fans, sorry.

SN: Right, because just because 2014 and 2015 have a focus, it does not mean that after that it is over. There is still some New Adventures stuff to pick up and, of course, FilMation. Even 200x could help some. I mean, there are hundreds of characters. I guess you could even get Crackers the Clown in there at some point. But he is also NOT in the next two years (laughs).

SN: Yeah, there you go. No Chef Allen in the next two years. You know, if Huntara and Masque were sort of your measurement of what to expect for FilMation, there you go. 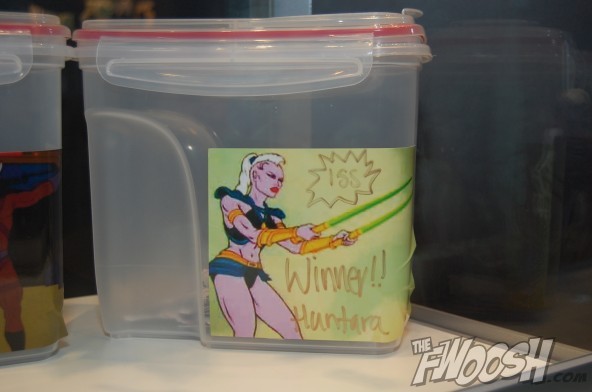 VB: Speaking of Huntara and Masque? Were you surprised by the outcome of the vote? I know you are talking to two Huntara supporters right now.

SN: Um, you know, I thought it could have gone either way. I think a lot of the Princess of Power fans, despite the fact that we released a lot of PoP figures, are very zeroed in on a specific niche of PoP characters: vintage, female, and a part of the Great Rebellion. But they came out in strong support of Huntara.

VB: I think most are ultimately referring to the Great Rebellion, that is the most important aspect.

SN: Right. So, under that premise, a lot of characters like Shadow Weaver don’t count.

VB: I suppose Huntara really would not count either, but I think a lot PoP fans, and just Classics fans in general, really like the character and the design.

SN: Right, so I hope that with that win and some of the characters that are out there, like Castaspella, Netossa, and Frosta, it shows that we ARE doing PoP and it is important to us!

VB: I think finally getting Glimmer was the big one. I mean, there are still a lot of vintage PoP characters to do, but she is so important that finally getting here was like a sigh of relief. 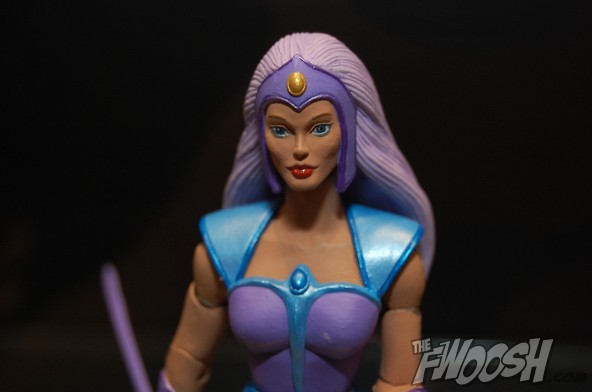 Matthew K: Well, the announced figures for 2014 are VERY diverse; you get action from all of the big three corners. Hydron is a lot like Glimmer and a big win for New Adventures fans.

MK: So, I cannot imagine that anyone would be too upset by the reveals because there is something there for everyone. It was a very strong lineup announcement.

SN: I think it is one of, if not the best overall reveals we have had at a Mattypalooza.

VB: So, without getting into specific characters, does the make-up of Q1 set the tone for what to expect in terms of diversity for 2014? 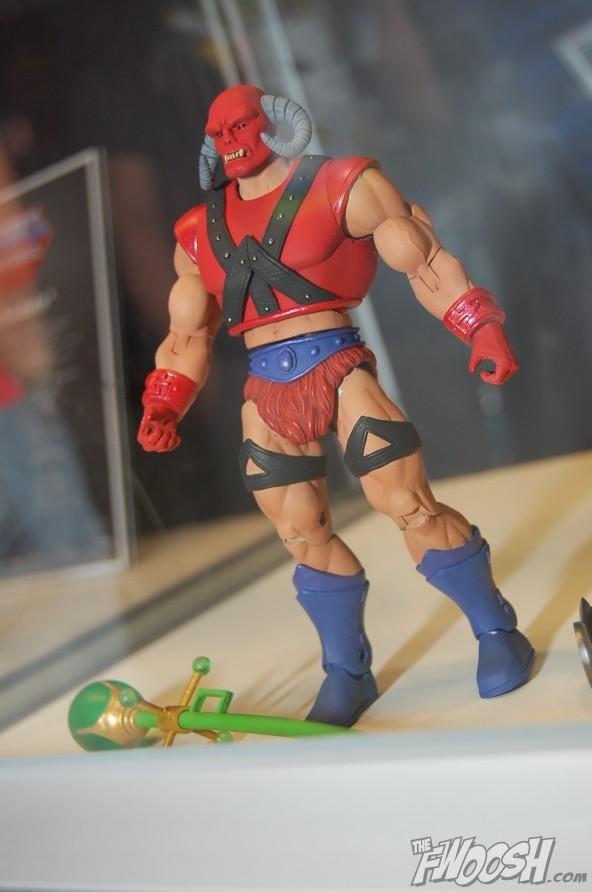 VB: Plus Goat Man! So, is that what we can expect?

SN: That is EXACTLY what you should expect for the next two years.

VB: Oh, and a certain tail was also briefly shown. A pretty recognizable one…

SN: Ah yes, a tell-tail! But yes, this is exactly what we told you guys. The original roadmap went to like, ’17 or ’18, with ’18 being a little scattered. We just basically took those four years and condensed them to two by taking out some of the more fringe items like the “Snake Man-at-Arms” type characters. They were originally in the roadmap, but we had to make cuts.

But, with prices going up, and they will continue to go up, you have to decide. 2015 might see another price increase. I mean, we don’t know yet. In ’14 we are going to hold it but we cost out the figures, and a month later, they cost more. This happens because the factory gives everyone a raise, or petroleum goes up. From packaging to figure, these are petroleum-based products and prices fluctuate all the time. We have very little control over that.

If we have two years, we are going to maximize every slot. There is ONE figure in 2014 that might make people go, “hmm…” but it is one single figure and it is still a really good one! It might be fair to equate it Plundor where a lot of people want it, but maybe some don’t. We felt that enough people want it, though, so we need to do it.

VB: That split even happens in the vintage line, though. There are a lot of people that want Rio Blast and some that are adamantly opposed. But, since it is vintage MOTU, it is more like a holy sacrament and gets a bit of a pass. I know there are countless characters that I want over someone like, say, Blast Attack or the Energy Zoids.

SN: Exactly. But I do think that if we do get to the end of 2015 and we get enough subscribers and you take a look at your entire collection from ’08 to ’15, if it HAD to end there, like, 90 percent of fans will say, “Okay, this looks good.”

VB: Yeah, I have come to grips that just because I am one of those guys that wants every character and that the line should go forever, not everyone is like that.

SN: Every fan has their niche, and everyone has their favorite characters, like, say, General Sunder.

VB: Hawke! Matt is a big fan of Hawke.

SN: Yeah, I wanted to do Lord Dactus forever.

VB: That figure is pretty insane. 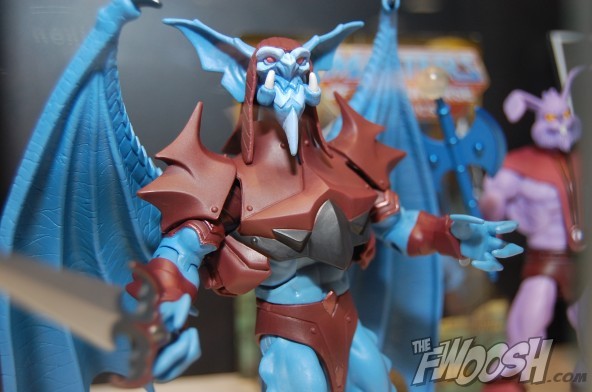 SN: So there are fans that will always have their personal favorites from the shows or the mini-comics. Oh geez, the yellow Tug-of-War guy… That is another one I can say that you are not going to see in the next two years (laughs). But there are a lot of fans that want him!

VB: So if 2014 and 2015 work out the way we want them to, and the subs are sold and the next two years are good, have you guys thought about what the plan will be past that?

VB: That is a good thing.

So, and I am making this up, they could say, “We just had a movie, let’s send this whole line to retail,” or “The movie got canceled and the Internet exploded, so we are shutting everything down,” again, just making these  up, but something could change at any time.

VB: With time possibly being a concern, I was a little surprised and kind of disappointed since I am such a huge FilMation fan, but there was not another FilMation add-on announced yesterday. Are we done with the add-on subs?

SN: No, not necessarily, you know? We want to see how the day-of sales go with Icer and Shokoti. If we do another add-on, we might do another FilMation, but there are other themes we could do as well. We could do a New Adventures theme and get guys like Kayo or the Scientists. 200x would be tougher, but maybe that could support a theme. There are mini-comics, you could do Princess of Power. It seems like the FilMation sub is doing well; we have to give it a few months.

VB: That is exciting, there are a lot of characters to do…

SN: We have looked into it, it is another way to maximize slots. But again, it probably won’t be until the end half of the year. 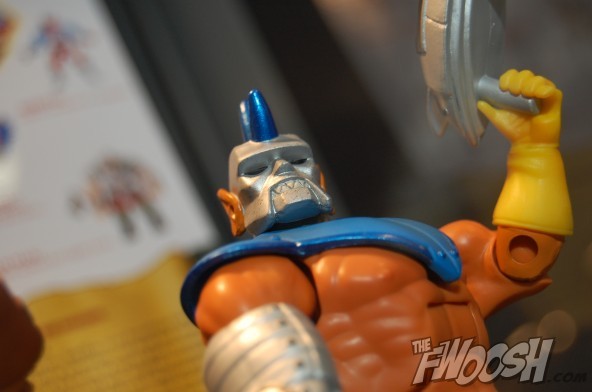 VB: It is kind of cool having another time of year to announce something new. One at SDCC and one at Toy Fair.

SN: Yeah, I think if we do one, that is where you will see us. We just aren’t there yet, we have not had enough time to judge sales.

*That wraps up Part II! Come back tomorrow for the next installment.