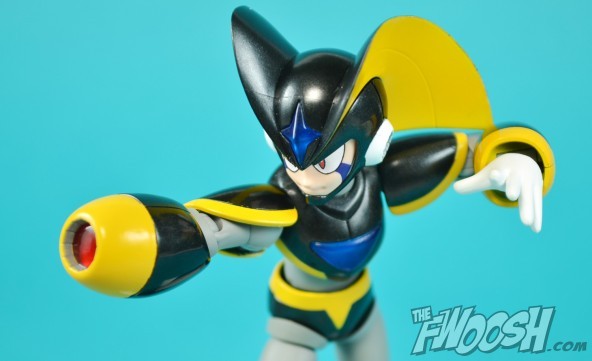 Bandai currently holds the key to the kingdom I want to explore more than any other in the action figure world: Mega Man. CLASSIC Mega Man. Good gravy, do I want figures of just about everyone from that property, and, unfortunately, I have paid witness to far too many companies failing at the attempt; however, Bandai could be different, if they are willing to make the commitment. I am talking about the Robot Masters. All of them. Also: the supporting cast. I am willing to drop fat stacks at the door of Bandai’s headquarters, and I know for a fact I am not the only one. Now, slowly but surely, we might get to this as a possibility because Bass (“Forte” in Japan) and Treble represent the newest entrants in this young line of classic Blue Bomber figures.

Mega Man was my very first D-Arts figure, and, needless to say, I was very impressed by him. So much so that I might have gotten my hopes up a little too early for an expansive Mega Man line, but I am going to continue to hope. The announcement of characters has been very slow, and most of those that are being bandied about as possibilities don’t do much for me. So I have to admit, I was instantly NOT thrilled that Bass was chosen as the second figure for this execution. Frankly, I see him as a bit of a “robot-come-lately,” and at his core, he is just Dr. Wily’s attempted upgrade to Mega Man. Kind of boring if you ask me, especially in a population that is very diverse and colorful when it comes to special abilities and looks. But since I REALLY want this line to continue, I went ahead and got him when I spotted him in the Bandai SDCC booth.

The good news is that I have no regrets from getting Bass (but I still kind of wish he was Guts Man instead), and if you take him on action-figure merits alone, he is actually a better toy than Mega Man. It is nice when you get something where you have little attachment to the character but still cannot help but love the toy. Bass (and Treble) is a fantastic example of that for me and it makes me want more characters from this line even more.

He comes packaged in a box much like Mega Man, but due to the size of Treble, it is actually a bit larger. In that box you get the fully articulated Bass, a mostly articulated Treble, and myriad swappable hands, faces, and arm cannons. The box is collector friendly, so even if you are one to keep the packaging, you can take everything out and put it all back with little to no harm done to the box. It does a good job of showing off Bass, but Treble is somewhat obscured by the graphics.

Like I said, if you have the Mega Man figure, you will know what you are basically getting here, but with some very nice improvements to the articulation scheme and poseability. If I have one gripe with the Mega Man figure, it is that the joints can be stiff to the point of inhibiting some of the posing options. Well, Bass has very fluid (but strong) joints, and there are improvements to the designs that offer up better range. Since I don’t own any other D-Arts figures, I am not sure if Bass or Mega Man is closer to a standard figure from the same family, but I like whatever they are doing with Bass — that is what they should stick with.

He is most certainly a fun figure to pose and play around with, and I am able to get him into just about any stance I can think appropriate for the character. The knees, elbows, neck, and ankles are the real bright spots for me, and the fact that they function so well means that you can get a lot of expression out of the figure. What makes it even more impressive is that you can do all of this while still having the ability to swap out alternate hands, cannons, and faces for the figure. Generally, things like that tend to limit the articulation. It is my experience that most of the Japanese import figures that I own feel a little more fragile than my other figures, and that is certainly true here, but there are times and places that I would be afraid of breaking on Mega Man (like his hips) that I do not fear with Bass. I should also mention that Bass is significantly taller than Mega Man in figure form, but I think that is appropriate.

The figure is also like his heroic counterpart in that he does have swappable pieces. He comes with a few different sets of hands to help with iconic posing, as well as cannon options for either arm. His alternate face plates are also fun because you can really bring out the expressive nature of the figure by matching an appropriate face with a pose. He has a placid face, intense (showing teeth), and more intense (showing more teeth). I am not really one for teeth gnashing as permanent expressions on most toys, but I think that face is actually my favorite for Bass, it just suits him.

Bass is also accompanied by his mecha-wolf Treble. The sculpt of Treble is absolutely great and captures the personality of him to a tee. He is quite a bit bigger than the Rush figure (as he should be), and just because of his character design, he has a lot more interesting things going on, especially with his tail lamp and back tubes. The downside is that he not nearly as posable as Rush, and while he does have some joints, past moving his head or hips, he feels pretty static. Your issue with that will vary, but at the very least he will look menacing next to his master.

So, in the end, I just got a fantastic figure of a character that I am not overly thrilled with. I could make a phone book of characters that I would have rather have gotten ahead of Bass, but I am not going to complain about much, if anything, when it comes to the actual toy. He is great fun and a great improvement over Mega Man, and he does look great opposite the little Blue Bomber, which is good since he was created to be a frustrated foil. I can only continue to hope and pray to the Mecha-Jesus that Bandai will come through and we can get some Robot Masters (especially from games 1 and 2) and some of the better supporting characters like Proto Man, Roll, and Drs. Wily and Light. I want to give you all my money, Bandai, come and take it!

Note: this figure is a Tamashii Nations exclusive, so check out the links below for purchasing options.