Ashley Wood and 3A Toys recently expanded the human ranks of the World War Robot portable (WWRp) line beyond just the de Plumes by introducing the Grunts to the line. As the name suggests, the Grunts are basically nameless soldiers who serve as cannon fodder on the battlefield. The Medic Officer and Nurse Betsy set, the first in a small series of Grunt sets, was offered up on Bambaland a few months back during the Action Portable 10-Finger Gang and Tomorrow Queen sale, oddly enough. It was a surprise drop in that it just showed up for sale out of the blue, but it wasn’t the typical 3A secret sale where the figure is offered up at random times for just a few seconds at a time. This set was actually available for a few days, which was actually nice for a change. 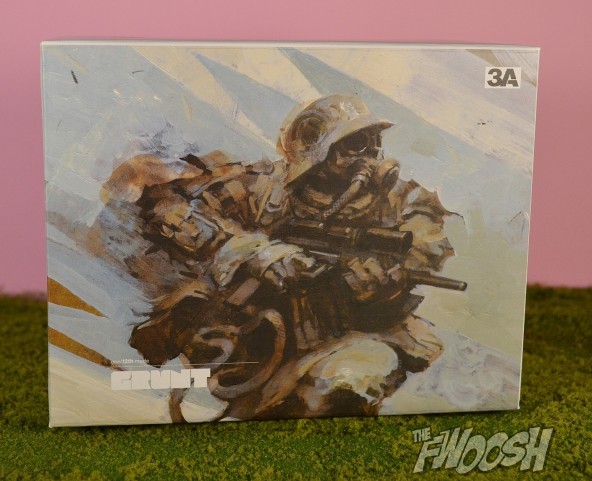 The artwork on the packaging is a bit generic. Nothing about it suggests “Medic” since it doesn’t seem to represent the actual figure contained within. It looks to be just a Desert Grunt, actually, so I’m inclined to think we’ll be seeing this piece of art again when the three-pack arrives later this year. 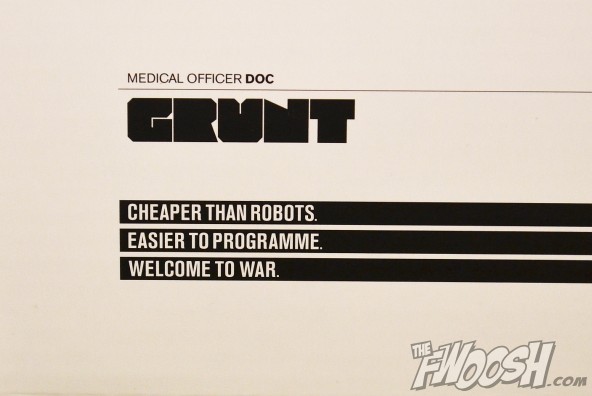 All it takes is nine simple words and the Grunt’s role in the WWRp universe is pretty much established. They accompany the ‘bots on the battlefield chiefly for utilitarian purposes — because they’re more cost effective to use than the average Bertie or Bramble. But even with that bit of knowledge, the Medic Officer strikes me as being a little more than just battlefield fodder. Since I’m not going to be army-building this guy, to me he looks like someone who operates through the dictates of his own agenda behind the pretense of “medicine.” I like to think of him as a Josef Mengele-type whose medical practices are a bit unorthodox and, well, cruel. 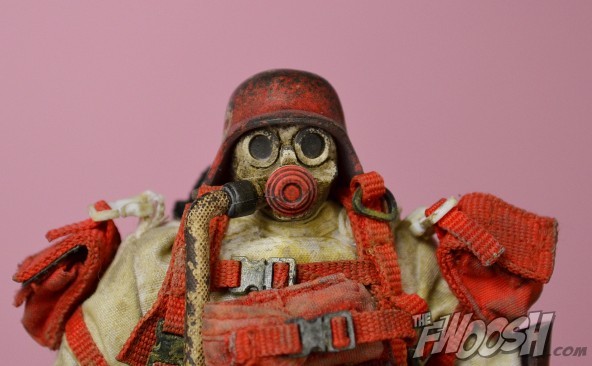 Right off the bat, the red is striking. It definitely catches the eye and it looks awesome. The helmet and gas mask are somewhat similar to the ones the de Plumes wear, but this is somehow even more expressionless and cold. The 1/6 version had a helmet ad mask that were removable, but here they are permanently fixed, which is for the best, I guess, since the head sculpt of the 1/6 Grunt was nothing to get excited about. In this case, with the mask being permanently fixed in place, it gives the imagination the opportunity to kick in — is he disfigured? A victim of his own experiments? Is he a clone? Etc. I think it adds to the fun. 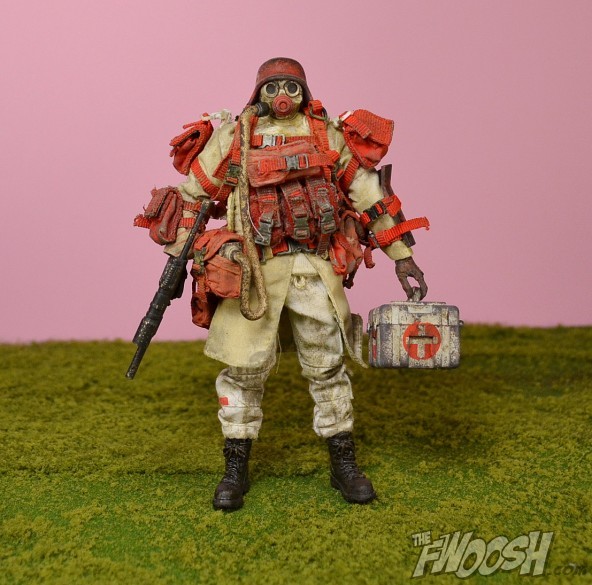 This guy comes packed to the hilt with gear, gear, and more gear. The mix of reds and whites are perfect for the colorway and definitely make him stand out in a WWRp display, even in a Medic squad.  Now, while I do love all the gear this guy comes with because it does add value to the figure, sometimes a lot may be just a little too much in this guy’s case.

There are just SO MANY bags and pouches. I mean, I guess it makes sense for a Medic to be loaded up with supplies, but there are so many bags attached that it does compromise the figure in some ways. Chiefly, he is incredibly difficult to stand. All his gear makes him very top-heavy, so it’s tough to find that sweet spot where he can stand and balance at all. It took me forever to take these pics because he kept falling over every three seconds, and it got to be pretty darn frustrating after a while. I’ve seen pics on Facebook of people stripping much of the gear off of him, which I think would really do a lot to help his balance issues, so that’s something I may try in the future if he takes too many shelf dives.

All the gear also compromises his range of motion a little too much as well. His arms can’t be raised very high at all, so it’s tough to get him in many dynamic action poses. Removing some of the gear would remedy this, of course, but that just means having to keep more stuff stored away, but at least it’s an option. 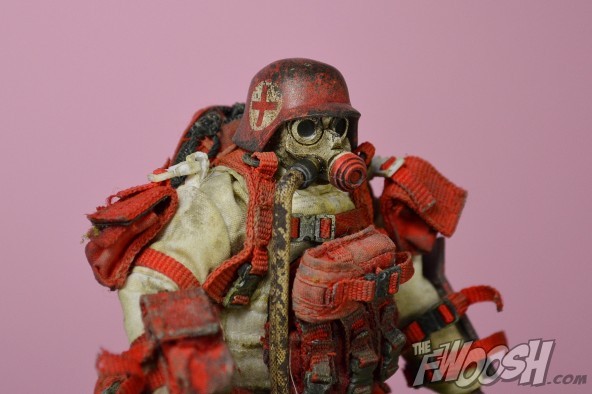 The weathering, at least on mine, looks great for this scale. It is actually convincing, but what sort of kills the realism a bit is the straps. None of them hang naturally because they’re so small and light. That’s the only other crit I have in terms of his appearance other than his looking too overloaded with too much stuff.

Included in the set is his Square, named “Nurse Betsy.” It’s an MK2 Square that’s fully decked-out in the Medic colorway’s signature markings. There’s not a lot that’s special about this Square apart from the deco, however, so if you have an MK2 Square, then you know exactly what to expect.

For a Medic, he comes packed with a whole lot of artillery. A machine gun, a shotgun, and a pistol. It’s a bit annoying that, despite all his gear, there isn’t a handy way for him to carry his guns when he isn’t using them. The pistol can be attached to his chest via a holster with velcro, but that means you have to displace another piece of gear in order to make room for it — that’s annoying. So, basically, you have to keep some, if not all, of his weapons stored somewhere if he’s not being displayed holding them. That’s actually OK, though, because the real star of the show here is the bone/surgical saw. Guns, schmuns — this guy is definitely being displayed with the saw.

In addition to the weapons and all the gear he’s got strapped to his torso, he also comes with this little medical supply kit, which is something that will be unique to him since the other Grunts won’t come with anything similar. Inside the box is a tray (not sterile), a saw (definitely not sterile), and two bandages (possibly sterile). 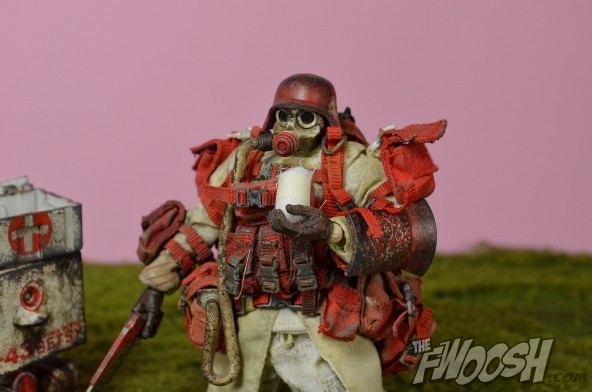 The bandages are a neat touch, but I can’t see myself ever using them, really. 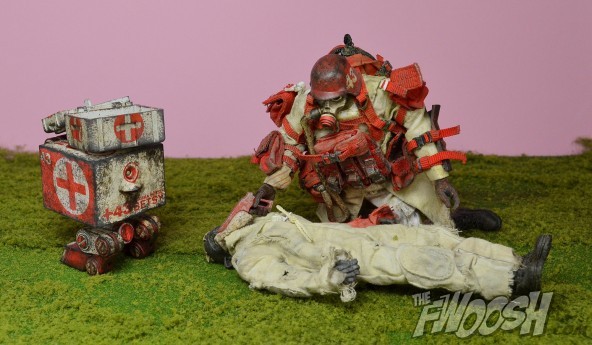 The saw is all kinds of fun, and it’s perfect for decapitating Zombs on the battlefield and the like. The bandages come wrapped up with a piece of tape holding 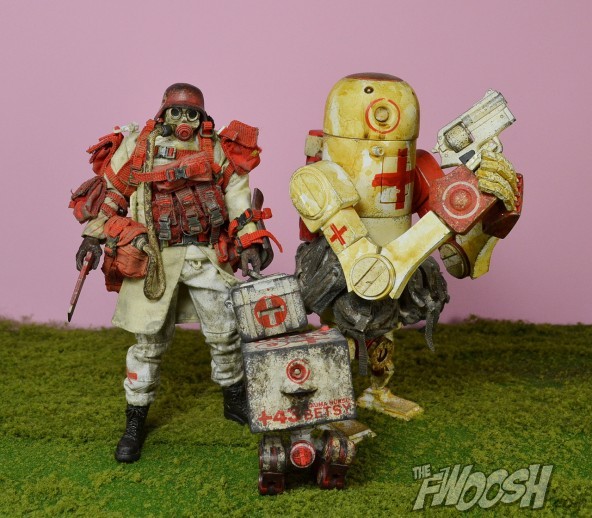 Since he was part of  a Bambaland sale, the only way to get your hands on him now is through the secondary market, but from the looks of it, he should’t be too hard to track down. He definitely has his share of shortcomings, but overall he’s a great-looking figure with some genuinely cool accessories. If you’re able to track one down, I’d say he’s worth the trouble.