These days, Spider-Man swings unmolested back and forth between Avengers mansion and the Baxter building, a well-respected hero who has proven himself to his most critical peers. In the early ’80s, however, Spider-Man was still very much an outcast who needed all the friends he could get. The introduction of the mysterious Black Cat changed everything for Spidey. In her, he found a confidant and lover, someone with whom he could share the life he’d been forced to hide for so long. More importantly, it gave ol’ Webhead an ally, someone he could call on for back up when things got especially rough. As time went on, other super-powered supporting characters appeared to bolster Spidey’s crew, but Black Cat will always be the first, and you never forget your first. 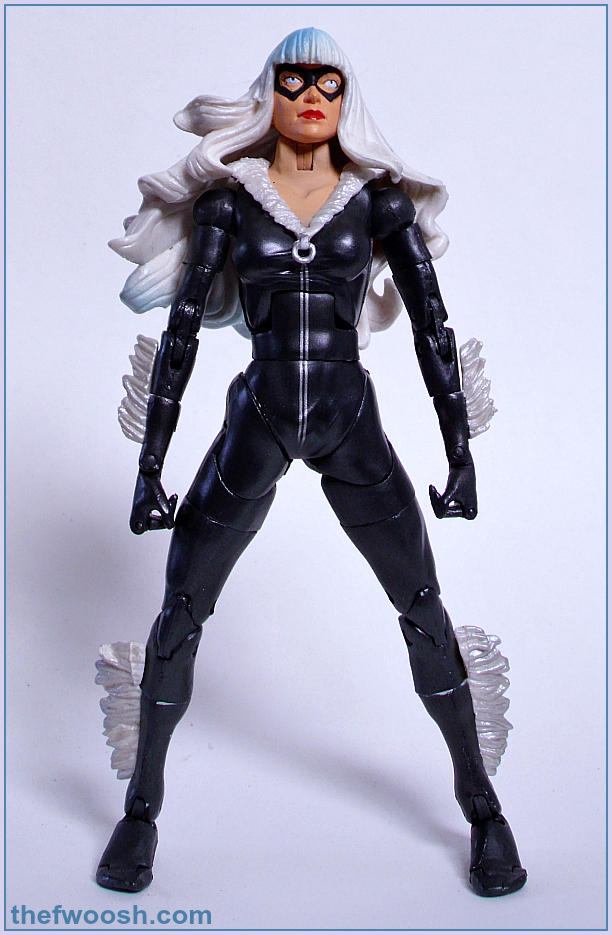 The Cat was included in the Marvel Legends Spider-Man Sinister Six Box Set. Sadly, I never found this set at retail. Now, I’m fairly patient as fair as toy collectors go, but Cat was a figure I was chomping at the bit to own. I needed her for my Spidey display, but when I finally tracked her down… is there a stronger word for disappointment? 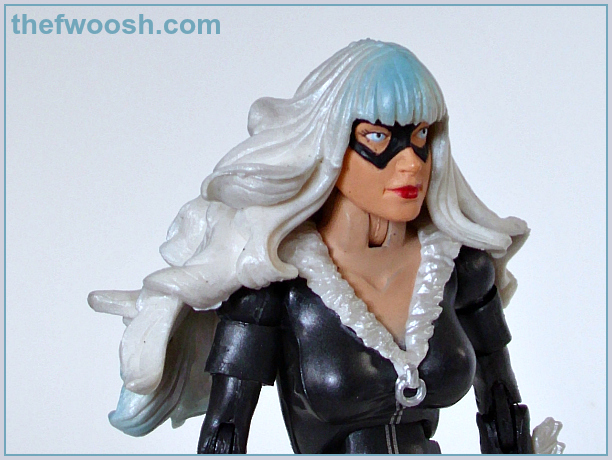 First, the positives. There’s a pretty face under that fright wig. Cat has always been a looker and the sculpt reflects that. The head has a pleasing oval shape, although at some angles the jaw looks a trifle mannish. Her nose is very natural and realistic in a way action figure noses usually aren’t, so it’s worth noting. The sculpted collar and zipper are nice, if a little soft. 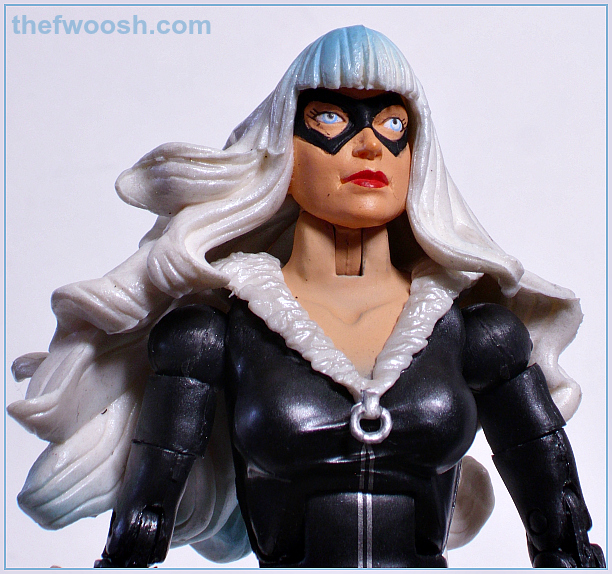 As you can see, Cat has the horrible hinged neck that early Legends females were saddled with. The worst part is, thanks to the hair, this ugly joint is also useless. It does not move. It’s a shame her head wasn’t just pegged in to the neck, as it would have had the exact same range of motion. That is to say, none. Her hair is an almost featureless cap of plastic piled into odd, unnatural shapes in an attempt to convey movement. The lack of detail is suggestive of ToyBiz’s earlier 5-inch line and looks out of place in Legends. Also, the Bettie Page bangs are way off-model and counter to the kinetic movement implied by the hair’s sculpt. 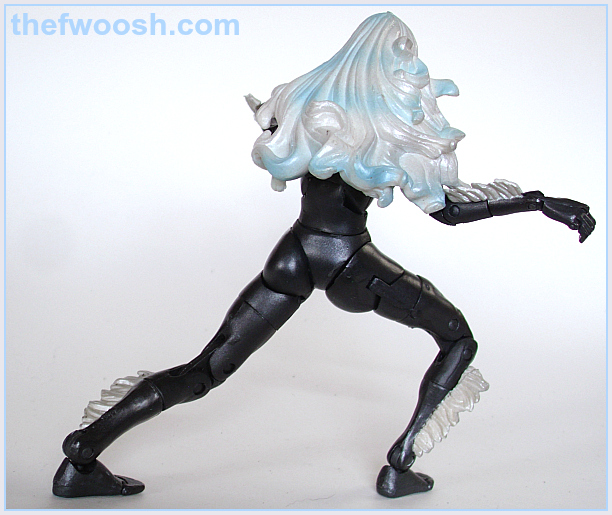 Black Cat is built on the Series 4 Elektra body, with a new head, upper torso, and sculpted “fur” elements added. While the idea of using the Elektra body may have looked good on paper, the end result leaves a lot to be desired. Y’see, Elektra was ToyBiz’s first attempt at a female figure in the new 6-inch scale, and there were issues. 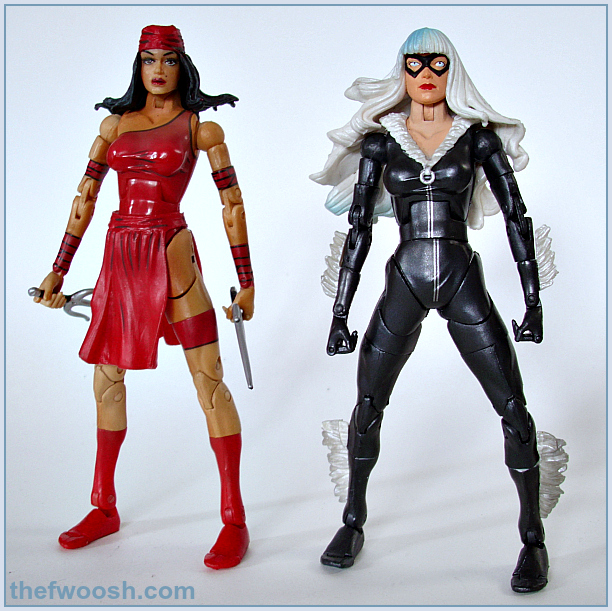 As you can see, Elektra’s skirt (what little of it there is) conceals the nightmarish jigsaw puzzle that is her lowers. The angry v-cut of her pelvis results in a very restricted range of motion. The hinge at the top of the thigh is so limited and unnatural it’s worthless. The mid-thigh cut just compounds the mess, but at the very least allows her to be fine-tuned into a standing position. Trying to get her into other positions, however…

Cat can’t do a whole lot but stand there. Already top heavy thanks to the bulky hairpiece, her spindly limbs and weak ankles simply can’t support her weight. The chest hinge is constantly driven downward by the head’s weight, making the figure hunch. Her loose waist simply won’t stay where you put it, constantly shifting out of alignment with the painted zipper. Her arms are over-articulated, perhaps to compensate for their stretched, definitionless mass. And then there’s this: 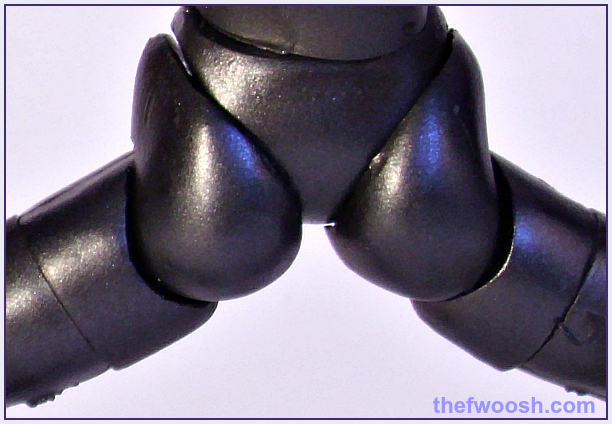 Articulated asscheeks. Thanks, I guess..

The paintwork is mediocre. Cat is cast in a dull black plastic, and a nice gloss coat would have helped convey the idea this was meant to be leather. The skin tones between the face and the chest do not match, which is pretty lame considering how little of it there is. The packaging lists Black Cat as having green eyes, but they’re clearly blue here, while her platinum blonde hair is now an opalescent white with a blue overspray. It’s neither subtle nor natural-looking and makes it hard to even display her in a vanilla pose. She’s just that bad. 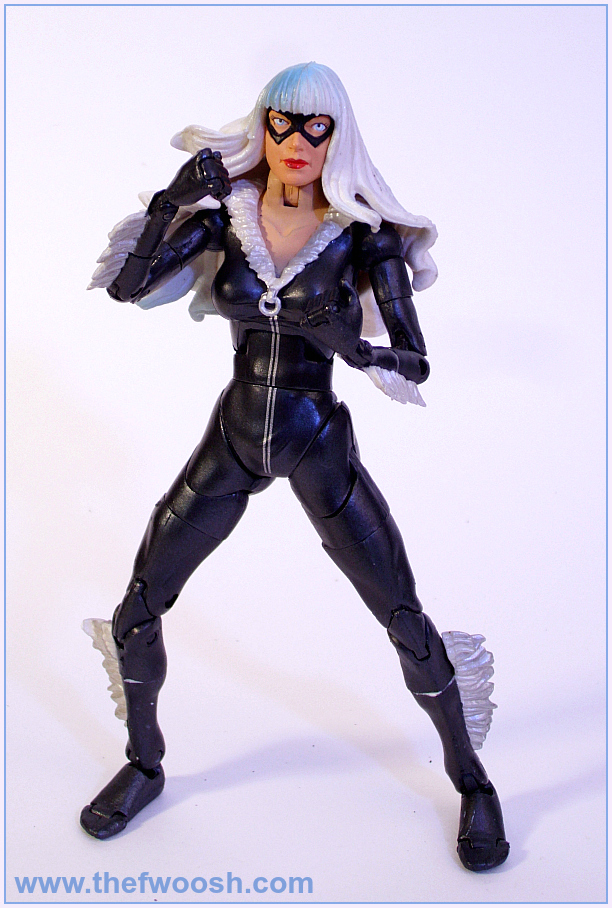 Cat is badly in need of a redo. Let’s hope we see her soon, so this figure can be retired along with Hasbro Emma Frost. It’s time for this Cat’s luck to change.