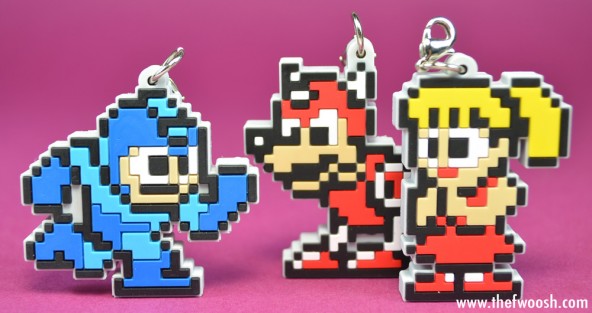 I am an absolutely hopeless Mega Man fan.

Mega Man II is tied with the original Legend of Zelda as my favorite video game of all time, and the classic series endures as the pinnacle of my video game love. I love everything about the little Blue Bomber, and I have attempted to buy up anything I can find for my collection that features him and his friends and enemies. I had a much easier go of it when I was in Japan; however, through the amazing magic of the Internet, I have been able to track down some real gems over the years, and while the idea of collecting little cell phone charms doesn’t sound like the most exciting thing in the world, I would ask all fans of Mega Man to give the dot.strap collection from Union Creative a look.

Yes, I am first and foremost an action figure collector, but aside from the new classic Mega Man D-Arts figure, I am a little starved for toys. My kingdom for some Robot Masters! Action figures aside, there is actually quite a bit of Mega Man merchandise to be had if you are willing to look to the East. So when I first saw these blind-box phone charms/key chains, I was really happy with how they looked. For being relatively small trinkets, they are probably the best physical representations of the actual game sprites of these characters ever made. They are not new by any means; in fact, they are out of print by now, but you can still pick them up here and I have some other shopping suggestions linked at the end of the article. So if you are a Mega Man fan, I do strongly suggest you check these out.

There have been three volumes released so far, the first featuring Mega Man (running) and the supporting cast of Dr. Wily, Dr. Light, Roll, Rush, Beat, Eddie, Protoman, an E-Tank, and 1-Up and another chase figure of Bass that I have not tracked down yet. Volume two also includes Mega Man (jump shot) with the original Robot Masters: Cutman, Gutsman, Iceman, Bombman, Fireman, and Elecman. Sniper Joe is a volume two chase figure, and I believe there is another, but I am not certain what. I have not been able to get volume three (featuring the Masters from MMII) but I REALLY want that set, so if you have a lead on it, I beg you to drop me a line, I will make it worth your while!

Again, these are intended to be little cell phone charms (big in Japan), so they each come with a small clasp at the top and an additional logoed strap so that you can attach them to your phone (or key chain). If you want to use them for their intended purpose, that is fantastic, but if you want a nice representation of the characters, the strap and logo charm can be removed. That only leaves the actual clasp, but if you REALLY wanted to just be left with the character, the loop can be easily cut off with an X-Acto knife.

Before these arrived, I thought that they would be pretty flimsy and rubbery, but I am happy to say that is not the case. They are flexible, sure, but they are made with a much stronger plastic and are about an eighth of an inch thick. That means that they can actually stand up on their own, so if you want to display them on a shelf, you can do so easily. I actually have mine affixed to the wall using a bit of blutak, so they are still light enough for that to support them.

I know, these might be far enough outside of most action figure collectors’ wheel houses to make them easy to dismiss on first glance, but if you are a Mega Man fan, I would highly recommend them. For what they are, they are great representations of the classic sprite designs and they are of very high quality. Sure, the blind-box thing is annoying as always, but if you get the full case, you get all of the regulars from the series. I would love to see Union Creative delve into more old Nintendo games for this banner: Mario, Samus, Pit, and Link would all be very fun. Or they could just keep making Mega Man characters and I would be completely happy. I am REALLY hoping I can dig up the third volume at SDCC next week; otherwise, I am back to scouring the corner of the interwebs. While waiting for Bandai to (maybe) get around to making some D-Arts Robot Masters, you can pick these us at any of the links below. 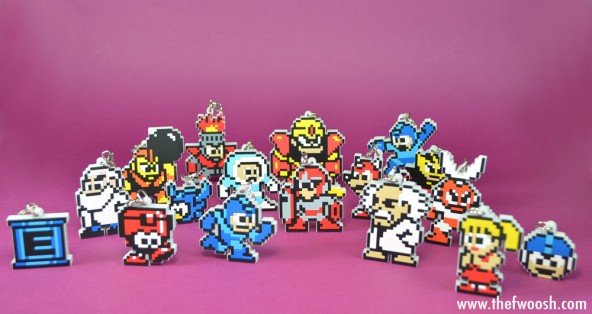