The original Transformers line was such an odd beast. Confusing at times, even. We were provided with action figures that looked a certain way, but in the other corresponding media we were presented with often vastly different variations of the designs we could hold in our hands. In many ways, Transformers demanded much, much more out of our little-kid imaginations than other toys. More often than not, you really had to search for the fun in the sometimes minimally articulated figures. 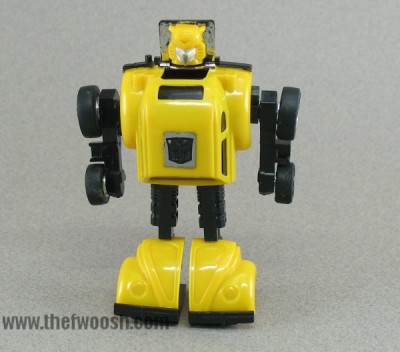 Take cute little Bumblebee here. While his vehicle mode in a constant, his robot mode is pretty different from his cartoon or comic counterpart. Where our other media presented a Bumblebee much more humanoid in appearance with a full range of mobility and an actual face capable of expression, our toy was the exact opposite. Sure, it transformed from a VW to a robot just like in the comic and cartoon, but once in his robot mode, he was… hampered would be the word for it. With a grand total of two points of articulation, Bumblebee’s entire fun factor was almost entirely insistent on our imaginations filling in the gaps where the toy “failed.” 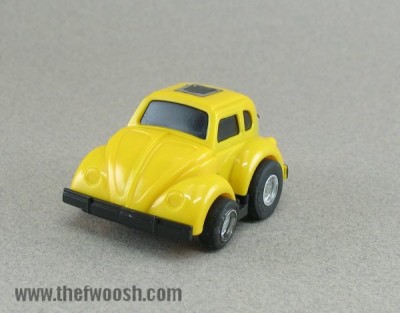 But we did it anyway. We made him fun, even though his legs were never able to stray from standing at attention mode. We made him fun even though he could only raise his hands in a Heil Hitler salute that is weirdly befitting his alt-mode’s German origins. If I’m remembering correctly, there was almost a bit of cognitive dissonance going on where in my head I “transformed” the figure from it’s rather archaic looking toy design to his cartoon or comic counterpart because that’s just what we did back then when we weren’t walking uphill to school both ways in the snow.

Bumblebee’s transformation was as simple as it could get: pull the front of the car out, flip up the hood, pull the tires out, flip out his head, and bam — he’s a robot. The simpler transformations like that meant you could get the entire thing done while you were making that chk chk chk chk transforming sound. Or at least I did.

I always took great care of my toys, and Bumblebee has held up very well. He still rolls around as well as he ever did. His rubsign still works. The yellow is just as vibrant. He’s still only capable of lifting both arms and then lowering them back down again, but he does it like a champ.

Overall, he’s a snapshot of another time, when the Cold War still raged and the Cosby Show was NBC’s biggest hit.

I look at a toy like this that I know I played with often with other Autobots and Decepticons, and then I look at how I now demand multiple levels of articulation and convincing robot and alt-modes, and I have to respect my younger self for his ability to find joy where joy lived. I’m a spoiled adult now and I apparently need more from my toys. I’m eagerly anticipating the images of the upcoming Masterpiece Transformers Bumblebee to see if it looks like the toy I played with in my head but didn’t really exist anywhere except in my imagination. Even with the great Transformer figures that exist now, I still don’t have a new Bumblebee, because none have ever felt quite right. I’m hoping that will soon be rectified.