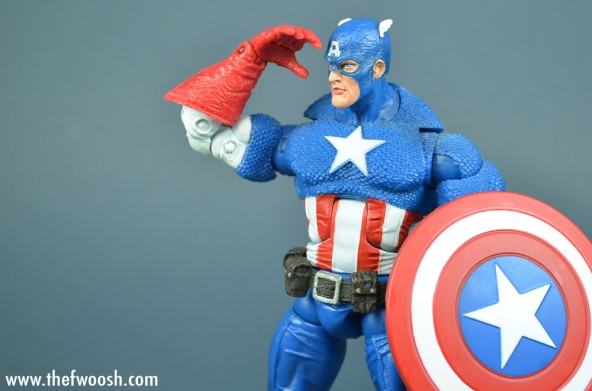 Editor’s Note: A Veebee/Man in the Anthill Joint! Pics by Veebs, words by Anthill.

The Sentinel of Liberty. The Star-Spangled Avenger. Ol’ Wing-Head. Whatever you call him, Captain America is an icon.

The good Captain has been with Marvel Legends since the very beginning, kicking off the inaugural wave of the seminal toy-line with fellow Avengers Hulk and Iron Man. I remember looking for what seemed like months for series one Cap, only to find him at the late, great Suncoast Video. For me, he instantly became the standard by which all future versions of the Captain would be measured. How does Face-Off Cap compare? Well, let’s take a look.

Face-Off Cap was built on the previously-released Marvel Legends series 8 Ultimate Captain America. If you’re familiar with that figure, it’s clear that Toy Biz went back and did some tinkering. The original figure’s neck was very odd, jutting up and away from a body — it’s the sort of posture you’d see on an angry Drill Sargent in the middle of chewing out a bunch of new recruits. I’m not sure if it was done on purpose but, combined with that figure’s tiny grimacing head, it made for a very unpleasant-looking Cap. The Face-Off version fixes that to a point, giving Cap a new head and neck, but the neck’s placement and the strangely-rounded trapezius muscles still cause it to look a little off.

Face-Off Cap also received new gloves and boots to closer reflect the comic book aesthetic of the character. The figure features a remarkable amount of detailing. Every surface has a texture – his mask has a wonderful leather-like quality to it, with tiny creases and pits, while the less embellished neck-piece beneath it is clearly meant to be cloth. Over top of this is Cap’s remarkably intricate scale-mail, with a large, presumably metal star at it’s center. This lies over a heavy, long-sleeved cloth shirt tucked into flared leather gloves. The pants appear to be a heavier fabric, and their deep folds and heavy seam are offset nicely by the rough grain of Cap’s trademark cuffed boots. He’s practically in braille.

As far as articulation goes, Cap is loaded. His head is on ball joint, but thanks to the aforementioned neck issue, it’s difficult to get much play out of it. His arms are better, with ball jointed shoulders, swinging pecs, double jointed elbows, and rotating glove cuffs over hinged wrists and fingers. He bends at the torso and turns at the waist, while his ball jointed legs swivel at the thigh, bend at the double knee, and rotate at boot cuffs over rocker ankles and a mid-foot hinge. Whew! Seriously, I don’t think I have that much articulation! 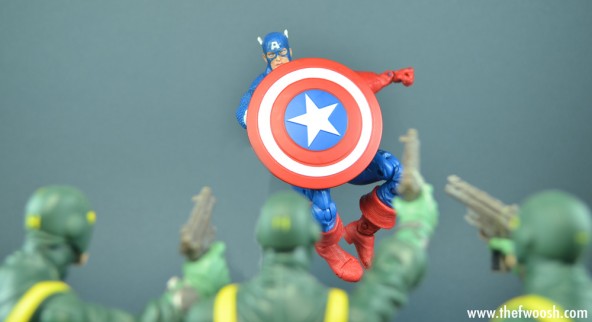 Look at him go! Cap is well known for his gymnastic skills and this figure allows you to replicate many of his classic moves. Heads up, boys! Cap is comin’ through! 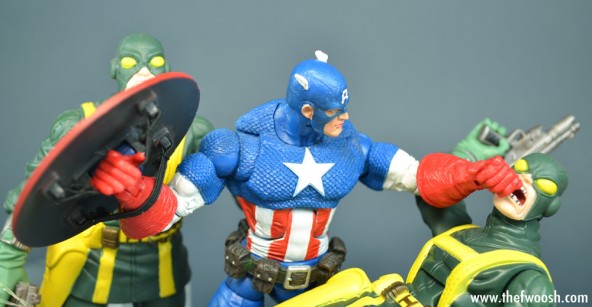 Cap’s paint is decent, if a little unexciting. Don’t get me wrong, I’ll take decent over sloppy any day, but when you consider the remarkable amount of sculpted detail on this little fella, you can see where a little more effort would have made him top shelf. Questionable choices like molding the wrist pins and ankle joints in blue become apparent once paint-rub begins. There’s some nice overspray on the pants to give them a more natural quality, but the factory’s attempt at a wash didn’t work out quite so well. Now, at the risk of making Cap look too “comic book-y”, I think Toy Biz should have gone with a black wash over the scale mail. As long as it wasn’t applied sloppily then I think it would have provided some nice depth and contrast, breaking up all of that bright blue. That said, the lack of contrast is not as noticeable in hand. 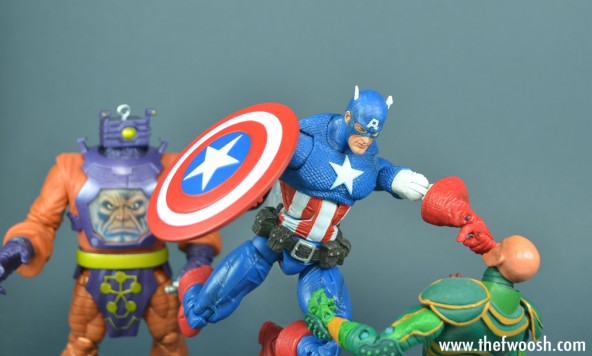 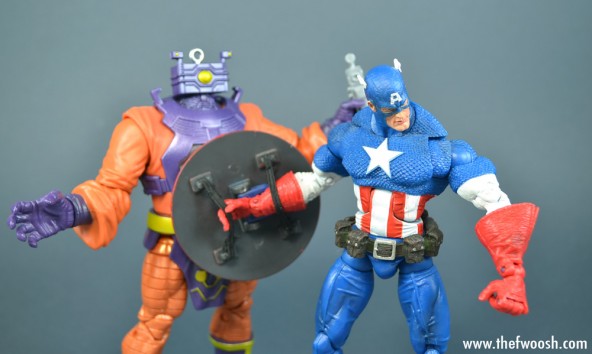 When it comes to accessories Cap has only ever needed one. His legendary shield looks terrific, and for good reason: it’s the same shield ToyBiz issued with series one Cap. Larger and flatter than Hasbro’s version, it displays nicely, either grasped in wing-head’s hands or worn over his wrist. Cap is also sportin’ a heavy-duty belt covered in pouches but, being non-removable, it doesn’t really count as an accessory. Still, just thought I’d point it out. 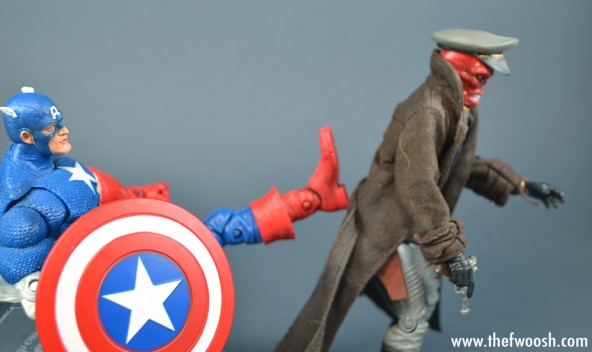 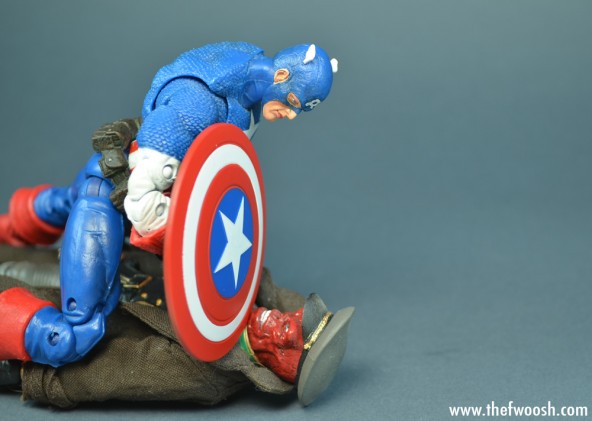 So, does Face-Off Cap live up to series 1 Cap’s impossibly high standard? Yes and no. As far as articulation goes, with 42 points Face-Off Cap clearly has his rival beat. But is more a good thing? That’s subjective, I guess — it all depends on what you want from your action figures. As far as sculpt goes, FO Cap dances rings around series one Cap in the detail department, but also suffers from some odd-looking musculature and his reduced-but-still-noticeable hunch. In the paintwork department I’d say it’s a draw, although the scale-mail paint app on series one Cap is more complex than anything attempted for the Face-Off version. In the end, Face-Off Cap is preferred by most collectors. His increased articulation, modernized uniform and general aesthetic are hard to argue with. Cap, we salute ya! 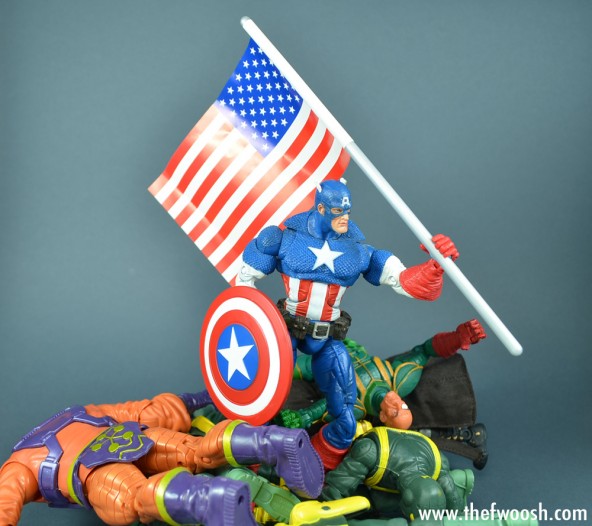