At a glance, Tigertrack looks to be nothing more than a yellow remold of Sideswipe released in an effort to dig just that much deeper into the wallets of the hardcore Transformers Masterpiece collectors. He’s not a “true” G1 character and was never in the cartoon or Marvel comic, so where does Takara get off releasing him as a Masterpiece figure while we’re still lacking Sunstreaker, Hound, Mirage, ad infinitum? It has to be a shallow cash grab, right?

The fact is, there are actually two sides to this figure, and depending on which perspective you choose to adopt, this simple “yellow Sideswipe” may actually predate the official Hasbro-released red Sideswipe from 1984. I knew very little about this figure going in, and I only preordered him on a “just in case” basis, meaning just in case I learn something cool about him and ended up wanting him. All I knew was that Tigertrack was introduced in 2003 as a Japanese exclusive and was, well, a Sideswipe repaint. What I didn’t know, and what I learned from reading this wonderful article TFscouce posted last week, was that this figure is also based on the original Japanese pre-Transformers Diaclone release of the toy, and, what’s truly mind-blowing, is that the original Sideswipe may have been intended to be “the yellow one” of the Sideswipe-Sunstreaker pair and was only made red due to a mistake, a miscommunication, etc. That means, for all practical purposes, this figure can also be considered an homage to Sideswipe as he was originally intended to look. That’s pretty awesome when I stop to think about it. I hope this means we’ll get a red Sunstreaker once that mold is finally released. 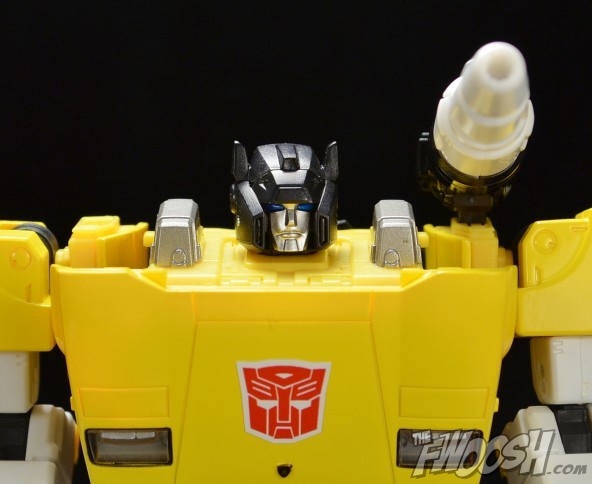 Even though at this point Tigertrack may ultimately amount to little more than a “yellow Sideswipe,” there is actually a great deal of history and controversy behind the original figure and character, so what Takara did in releasing this figure as a Masterpiece is actually kind of awesome. AND they’ve left it up to the individual collector to choose which version to integrate into their display by making the Autobot sigil an optional design element. With the sigil in place it’s Tigertrack, but without it the figure resembles the Diaclone. It’s the small things that make this so cool.

A fierce and dedicated sentry, Tigertrack patrols Autobot installations with unmatched vigilance. His incredibly acute sensor packages enable him to spot approaching enemies through extreme low-visibility conditions, and can even see through camouflage screens and other optical illusions. Combined with powerful weapons and blazing speed, Tigertrack is one tough bot to get past!

His packaging is unique among Masterpiece releases just for the fact that it’s in a weird silvery grayscale with an almost mirror effect. There is no color at all, which makes his yellow pop all the more once he’s opened. And I still get a kick out of seeing the official Lamborghini seal on the packaging.

Now, this is my third time buying this mold, so I really wasn’t expecting anything new or cool here with Tigertrack, but I have to admit the yellow absolutely knocked my socks off the instant I laid eyes on it. It is beautiful. And unlike his mold-mates Sideswipe and Red Alert, the paint apps on this guy are flawless. Everything looks clean and perfect. This was a welcome relief since I was a little worried about that as I opened the box knowing all the issues that surrounded Sideswipe’s and Red Alert’s paint apps. No issues here at all, though; everything is clean and sharp. 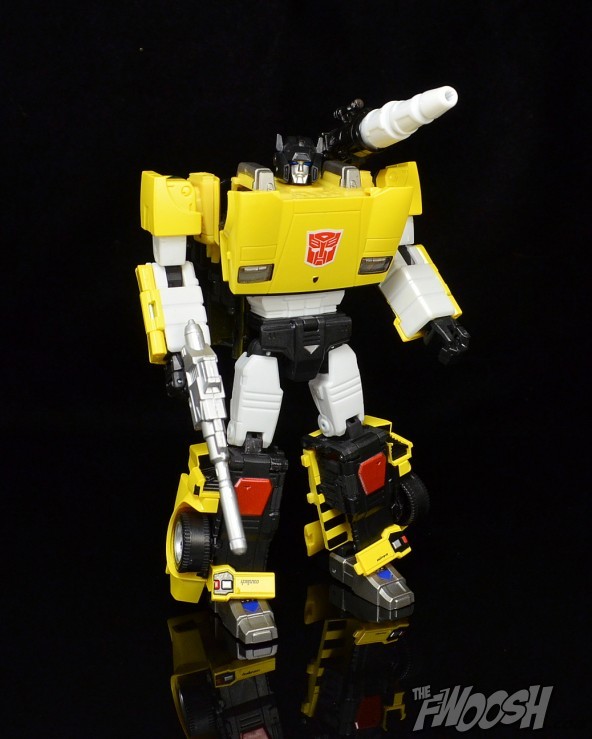 As good as his Lambo mode looks, his ‘bot mode looks even better. The yellow is really doing this mold all kinds of justice. Again, there’s really nothing new here, but I’ll be darned if the yellow doesn’t make it all seem fresh and awesome all over again. And I hate to say it because Sideswipe has always been one of my favorite Autobots, but I really think I prefer the yellow to the red. I can’t believe I just said that, but I really think it’s the truth. The yellow is bold and it pops like crazy. I can’t take my eyes off it.

He comes with all the same weapons as Sideswipe — the blaster and the shoulder cannon — so there are no surprises there. I like that the rear of the cannon is black because it breaks up the mold a little bit, as opposed to Sideswipe’s that’s just solid white.

He also comes with two pile-driver attachments that were also available with Sideswipe, but only as exclusive “extras.” Sideswipe’s were painted a silver/chrome color, but TIgertrack’s are unpainted and are just the color of the black plastic they were cast in. They’re a neat extra, but I would have been fine without them. Maybe I’d be more enthusiastic if they had been painted a chrome, but as they are they’re kind of boring and forgettable. They’ll likely just be staying in the box. 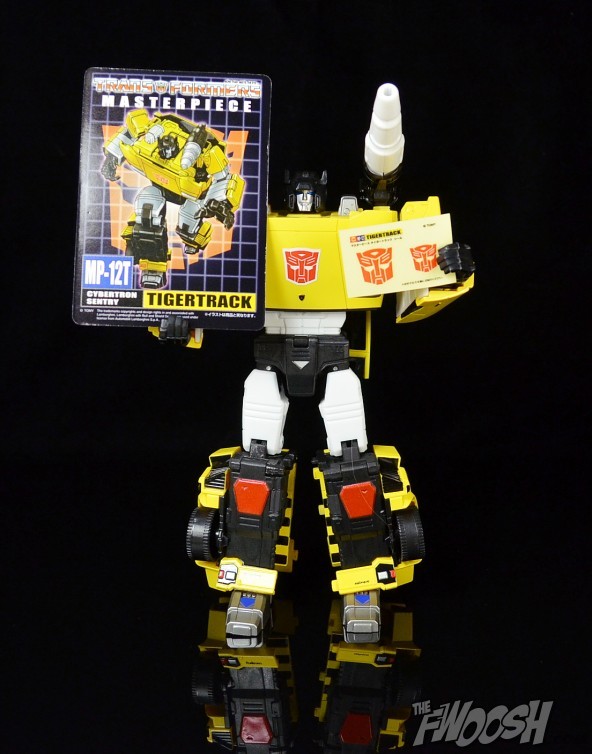 Like all Takara Masterpiece releases, he comes with a “collectable trading card” that gives us some additional info, and, as mentioned earlier, he also comes with two Autobot symbols. You have your choice of two different sizes, but I have this weird need for my Autobot symbols to have the white outline, so I opted for a symbol by Reprolabels I had laying around. The white is very subtle against the yellow, but my eye catches it and it’s just a strong preference I have. Your mileage may vary, however.

In terms of comparison, when posed side-by-side with Sideswipe, I find Tigertrack’s yellow commanding my attention to a much higher degree. Again — I simply cannot take my eyes off that yellow. I’m in love with it. When I originally made the purchase, I thought I’d just be using him as a Sunstreaker stand-in until a true Masterpiece Sunstreaker is released, but I think Tigertrack will be remaining in my permanent collection even after the two brothers are finally together.

When it comes to articulation, he has all the same awesome articulation as his mold-mates. Sideswipe was one of the most highly poseable G1-based Transformers toys ever, so Tigertrack is a joy to pose and play with as well.

Since he’s not a character many are familiar with, you could probably take some creative liberties and slap a Decepticon symbol on him and call him a Stunticon or something. The point is, there are a lot of possibilities with this guy since he’s not a character who’s hardwired into the memories of the average Transformer collector. I like having another Autobot to add to the ranks at this stage in the game, though, so he’ll be facing off against the Decepticons for the foreseeable future.

Tigertrack is still available to order or preorder, but it is unlikely he’ll ever get a reissue, so if you’re interested, place your order sooner rather than later. He’s a worthy addition to your collection even if you already have Sideswipe and Red Alert, and he’s not even close being to the superfluous repaint I thought he was. He’s awesome.