What about these Marvel Legends? San Diego Comic-Con, like Toy Fair and New York Comic-Con, are times when the toy companies pull out their big guns and show us product that is out, coming out, or planned for the future. For those lucky enough to get to the cons to see the figures, it’s like walking into a toy store when the new cases of toys are being opened or the new product catalogs hit the shelves. It’s this magical unveiling of nostalgia. And for those of us that stay home, we stay glued to our computers waiting for the latest update, post, or bit of information that makes us wiser, better opinionated; we’re constantly f5ing for that bit of nostalgia that will take us away.

I’ll be the first to admit I have not bit on the Return of Marvel Legends. There are some ooohs and aaaaws, but I haven’t found that excitement. Yes, even some of my favorite characters like Zola and Terrax have not been enough to draw me out. And then Hyperion came into the picture, and the figure came out and the reviews were good. And slowly, I started cherry picking. Slowly. Toy Fair and SDCC ’12 piqued my interest, got my juices flowing. 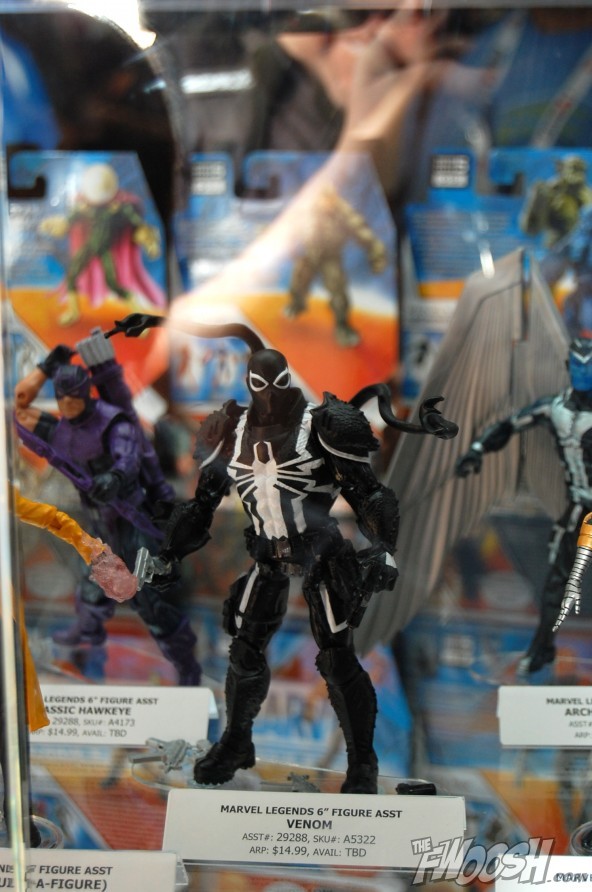 But not enough. That is until SDCC ’13. I have to say that I am absolutely thrilled with what I saw. Preview Night was about as good a start as could be. As I looked through Matt K’s incredible pictures, I saw Pepper Iron Man, Iron Man 3 Mandarin, “Marvel Now” Thor, and Venom! I’m reading Marvel Now Thor, Secret Avengers, and Venom on my Marvel Digital Comics Unlimited subscription (oh, and if anyone at Marvel can help out, my sub is screwed up and I’ve been without my service for three weeks now). I love the new Thor book and look and I love Secret Avengers, with the upcoming Modern Hawkeye, this Venom, Marvel Legends BAF Giantman, Valkyrie, X-Men Classics Beast and Legends 2-Pack Black Widow, I’ve almost got the team I want. Now bring me Captain Britain and Human Torch and we’re gold. Excitement tingling. 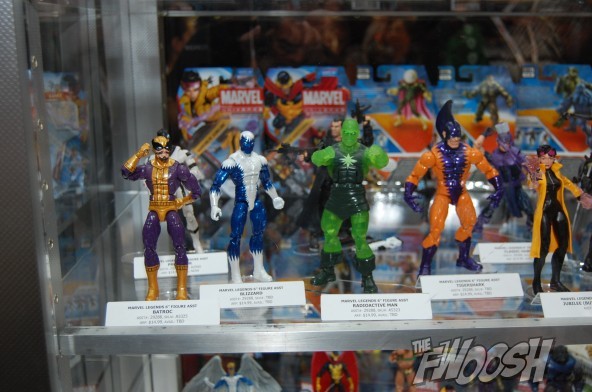 Excitement exploding. As I looked on, I saw Batroc, Blizzard, Radioactive Man, and Tigershark. Masters of Evil! OK Batroc not so much, but the rest! And throw them in with Klaw, Constrictor, and Ultron and you have some classic Masters of Evil teams. The Avengers vs. Masters of Evil drama that will unfold in my house will be legend… wait for it… ary. Now if only they made Zemo.

Matt K rocked my world when he posted pictures of Zemo. It wasn’t enough that they are filling out the rest of the Masters of the Evil, but they went and made their leader. And, yes, the Internets is ablaze with the modern version that was chosen. But… I… don’t… care! ZEMO! 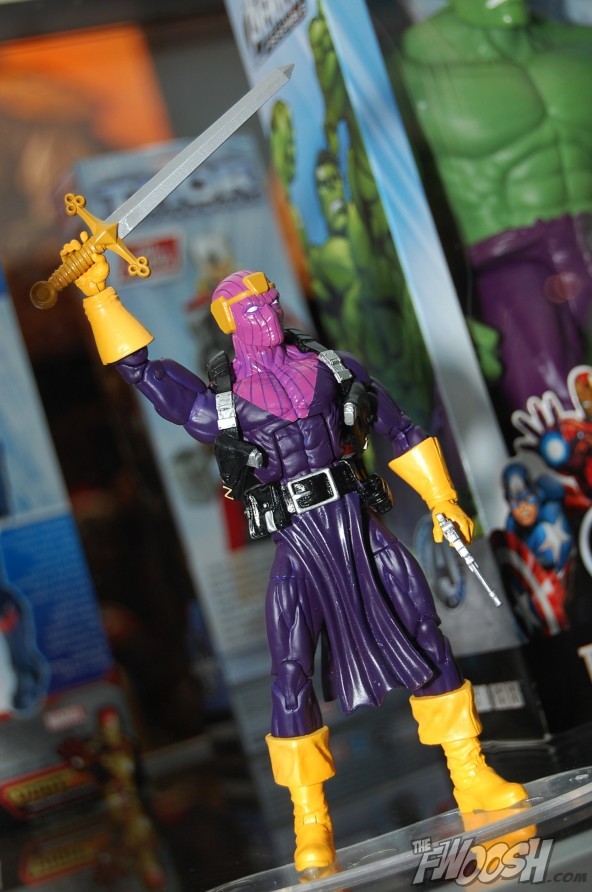 The Hasbro panel on Saturday brought on more goodness. Red Skull! Finally I can have a decent articulated good-looking Red Skull in my collection. Of all the things that Toy Biz didn’t get right, this time around Hasbro got it right. And we’re getting an AIM Soldier. Oh for the love of god, AIM Soldiers! How awesome! I’ll be broke picking these up and having them fight my Hyrda soldiers in some sort of internal civil war gone horribly wrong. Hasbro wasn’t done — they teased us with pics of Black Cat done on the new, voluptuous body. And she looks great. And finally they bring out the digital sculpt of Star-Lord. 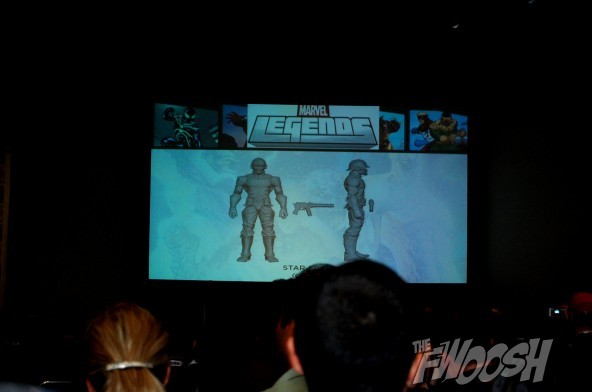 Now allow me a minute to geek out. I did (and still think I do) have an original print of Marvel Preview issue number 11. This featured Star-Lord, and was the first time that Chris Claremont, John Byrne, and Terry Austin teamed together. You might remember them from their run on Uncanny X-Men. Star-Lord hit home with me; it was a great science-fantasy story, typical of what you got from the ’70s. I’ve always wanted a figure of Star-Lord in his classic costume. And while I am not gonna get that from Hasbro this year, I am very happy about the Guardians of the Galaxy uniform version that will be coming out. Star-Lord is cool, in either costume.

Hasbro also showed off the new Beetle and Boomerang figures. Both look fantastic. While Beetle is not in his classic costume, it’s one that works. Slap some green and purple on there and you are golden. Boomerang is another Masters of Eviler, and will all these MOE characters I might be able to have a war with the villains from DCUC! But wait, Hasbro wasn’t done, they showed off a picture of the “Marvel Now” Captain America, and then they showed off the actual figure. I love this figure! I love this costume! I’m really enjoying Marvel Now and the Avengers comics, and I like how this figure is a bridge between the comics, cartoons, and movies. 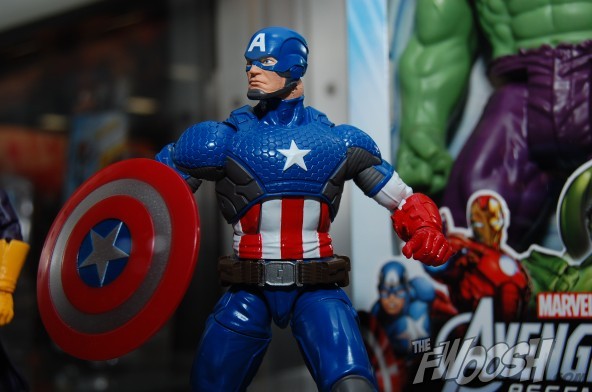 To finish off the con, Hasbro put out figures of Black Widow, Cap, and Winter Soldier from the upcoming Cap movie. They all look fantastic and I have to admit I am excited about picking them up. And as excited as I am about these figures, I am disappointed that there isn’t more movie Thor loving. Hasbro’s put their chips in Wolverine and Cap, leaving Thor behind.

Except in the 4-inch realm. Thor is getting love there, and, as expected, there are some really good-looking Marvel Universe figures coming out. I’m left with a classic feeling of excitement, exhaustion, and wanting more! As a person that did not attend the con this year (again), I recaptured that old excitement that I used to have before I attended the con for a few years. F5 was my best friend and I couldn’t wait for more.

A special thank you needs to go out to Matt K for providing the best pictures I’ve seen from a con in years. In addition he went out of his way to get the pics up as soon as possible. Also, VeeBee and Robokillah kept us up to date on Facebook and this was a great way to get updated information. The team really kicked ass this year.