There’s a reasonably sized subset of Transformers enthusiasts out there whose fondest dream is an expansive line of non-transformable robot versions of their favorite Transformers characters. I know that sounds like heresy and goes against the very nature of the property, but when 90 percent of the time they’re in their robot mode, it only makes sense. While the toys have made gigantic leaps and bounds in their ability to marry well-done alt-forms and fully playable and poseable robot forms, there’s only so far that can be taken while preserving the transformation. Masterpiece comes closest of all, but it’s still not perfect, although they’re making great strides in getting there lately.

While some nontransforming Transformers do exist, there is still a lack of a perfect representation.

Back in the mid-2000s, Kaiyodo produced a group of Transformers for their Revoltech line. Revoltechs use a specific joint setup that allows maximum poseability and parts swapping while maintaining a high level of play and posing facility.

As the figures were released, some improvements took place, notably in the shoulders. Optimus Prime (or Convoy) and Ultra Magnus feature only a cut joint where the rest have the standard Revoltech joint.

Each figure features multiple hands. They can be difficult to pull out and swap, and my fingers were fairly sore after this marathon photo session, but once they’re in there’s no chance of them falling out.

The figures come in at around five inches in height each. Since the Optimus mold was the first and improvements were made, he ends up being just a little bit shorter than the rest, as does Ultra Magnus who shares the Optimus mold. So clearly, even in these figures, scale is an issue. It’s troubled Transformer fans since 1984. 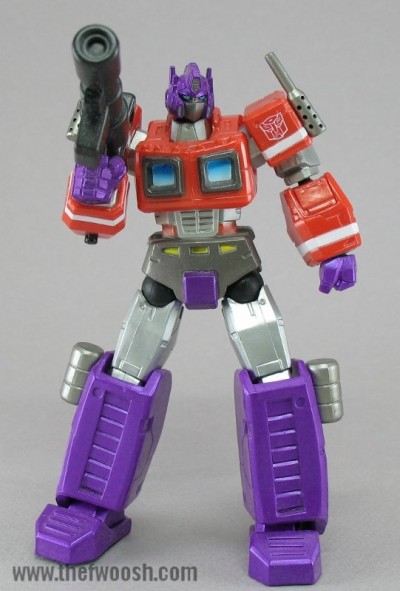 Despite the slightly more primitive setup for his shoulders and his height, Optimus is still a fun figure. The rest of his joints are the standard Revoltech style, so they offer plenty of movement. He comes with a pair of fists, a gun hand, a pointing hand, and a multi-purpose “wave hello” hand. It can also call a “meeting to order” or “grab a shoulder.” 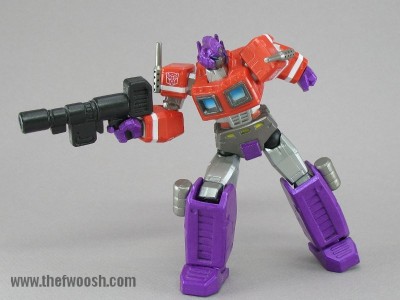 His gun comes in two parts connected by a small peg that doesn’t really do a great job of staying in place, so you might want to glue the two parts together if you don’t want his gun falling apart one billion times like it did during the photoshoot.

I’m not really a fan of the smaller chest windows this Optimus has. I believe it, like all of the Revoltech Transformers, takes a design cue from Pat Lee’s Transformer art, so apparently he drew them smaller. 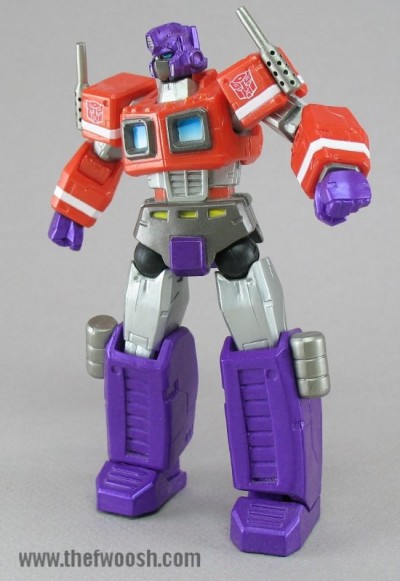 In addition to his hands and gun, he also comes with the Matrix of Leadership, but I gave that to Hot Rod.

He’s a sturdy, well-painted, if not perfect version of Optimus, and can be put into some great poses with friends and foes. 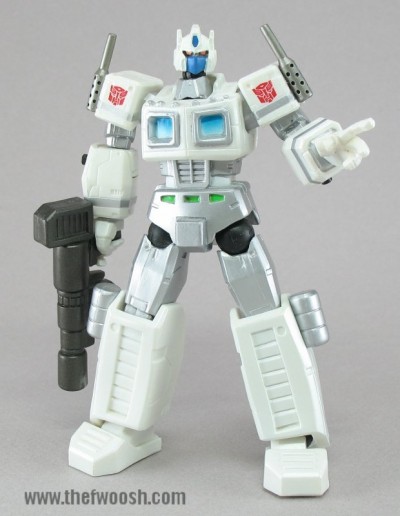 A straight up redeco of Optimus, this isn’t the traditional Ultra Magnus with trailer add-ons that most have come to know as Magnus, but follows suit with many other figures in being a white Prime. He comes with all the same accessories as Prime except for the Matrix of lLadership (damn, Magnus, you can’t get a Matrix to save your life), instead including a pair of connected Prime/Magnus hands for a solidarity handshake. Brothers in arms quite literally. 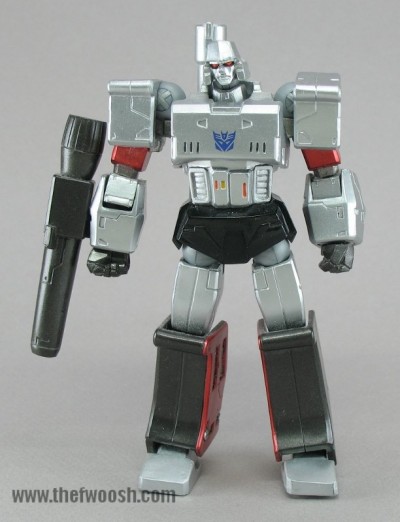 Megatron, above all other characters, benefits from not having an alt mode. While transforming into a gun is a pretty nifty idea taken on its own, having to have each and every G1 action figure version of him transform into a gun really wrecks the play value of his figures, including the Masterpiece figure, which to me was anything but a masterpiece. Because of this, the Revoltech Megatron is essentially the only Megatron I’ve ever been  happy with, warts and all. 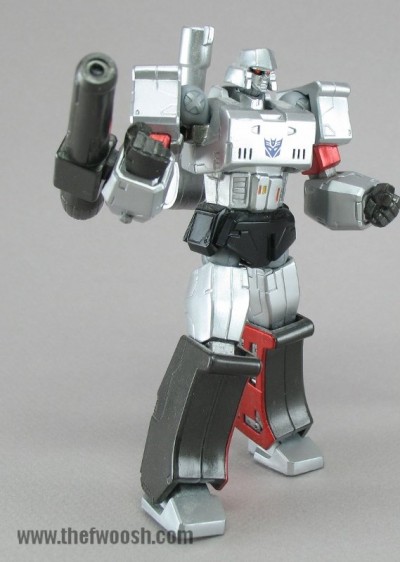 Megatron features the new shoulders that make a huge improvement in his posing abilities. There’s much more character in the types of poses he can get into, which makes for a much more fun Megatron, gesturing and pointing his fusion cannon and generally going nuts on everyone.

Megatron comes with fists, a pair of alternate open hands, and a gun-hand that really has no value because he can’t really hold himself.

As with Optimus, there is also an aspect of this mold that I don’t like, and I’m assuming I can attribute that to Pat Lee’s design as well: his fusion cannon. It’s too small. I mean, it’s not a deal breaker, but it does come in a little lightweight considering it’s supposed to take up a lot of real estate over his arm. The problem is mostly in the barrel. If it were a little wider and thicker, then it would be perfect. But as it is, it’s simply OK. I don’t need “perfect,” but Megatron has lacked on so many toy fronts that it is a shame that his cannon couldn’t be a little bit closer to what I envision in my head. 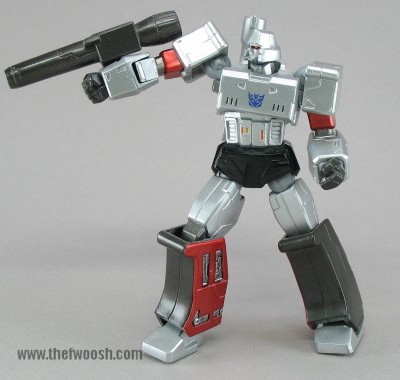 But other than that, he’s a huge amount of fun to play around with, more so than Optimus because of the increased functionality of his shoulders. 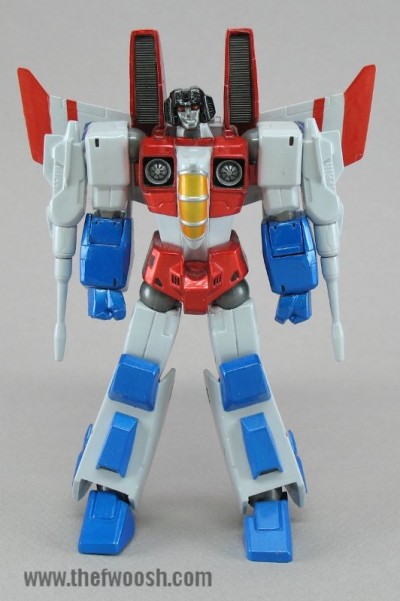 The Revoltech TF figures really improved with each figure, as Starscream benefits from any previous negatives. Having  less overt Pat Lee-inspired design nods than the others, Starscream is more in line with the G1 bastard we all love to hate. 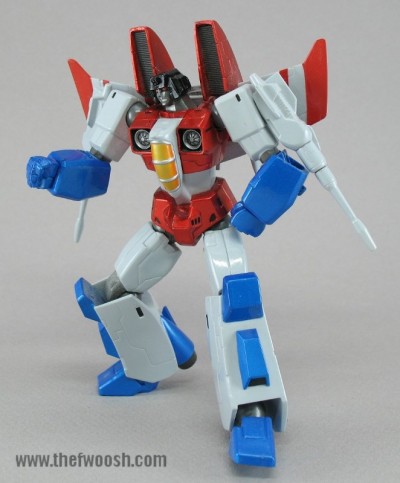 He comes with a gun-hand and Megatron’s gun mode because sometimes Megatron is too damn lazy to shoot people himself. That’s how it needs to be done, people. No transforming Megatron, just Megatron and his alt mode, separate.  He also comes with a “you suck as leader” pointing hand, and what can only be called a “smarmy hand” for being smarmy. Because the dude is smarmy. 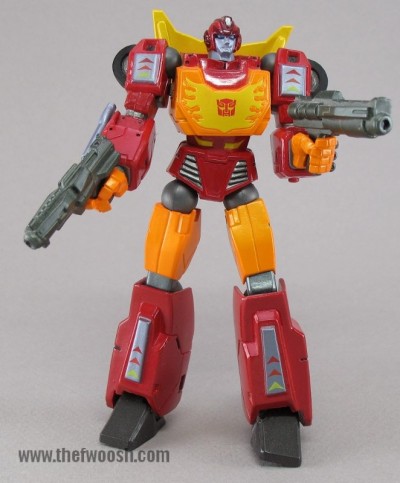 Hot Rod comes with a pair of guns and a pair of hands to hold them,  the pointing hand that they all get and a thumbs-up hand because everything’s going to be a-OK once he stops helping Optimus. 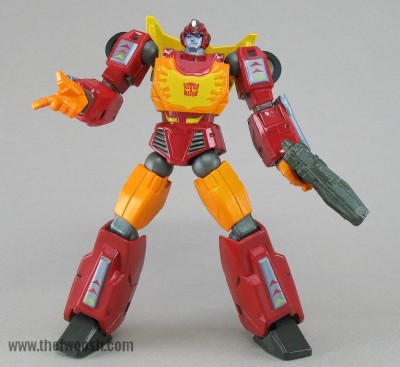 By the time they got to Hot Rod, they really had the hang of these Revoltech Transformers because he’s the most poseable yet, and his dual pistols are fun as hell to pose him with. Both he and Starscream come with stands with their own Revoltech joint, so you can have them posed mid-jump or mid-flying in a  number of cool poses in any position you want them to be in. Those dual pistols really put me in a John Woo mood, and I can see him blasting Decepticons while flying through the air in slow slow motion. Kind of a “Chow Yun Rod.” Or something. Even more porno-sounding than Hot Rodimus, that one is…

The TF Revoltechs are not perfect versions, but they are a hell of a lot of fun packed into relatively small packages. I wish they had been able to pump out at least a Soundwave, Shockwave, or a few more Autobots. But the set of five they made are plenty of fun on their own, and I don’t regret the purchase at all. Ultra Magnus may not be essential since he’s not in his most popular look, but the other four were well worth it.