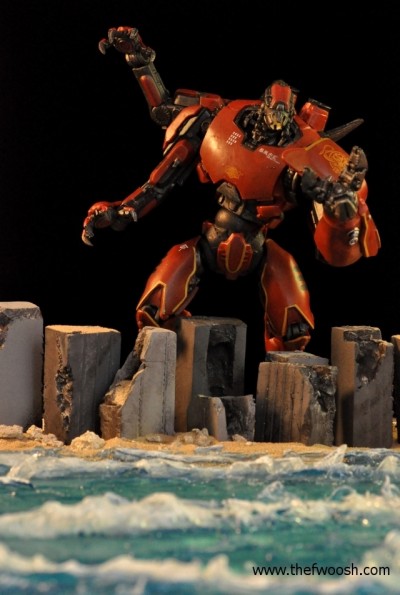 Pacific Rim, which hits theaters July 12, is Guillermo del Toro’s take on the ever popular “Robots punching Monsters” cinematic theme. While history has proven that the robot genre peaked with Short Circuit 2, I have full faith that Guillermo del Toro can deliver something spectacular.

NECA has been achieving their own greatness lately with their Predator and Aliens lines, and are now hoping to further their sci-fi mastery with Pacific Rim. Today’s review will be focusing on the Jaeger, Crimson Typhoon and the Kaiju, Knifehead. 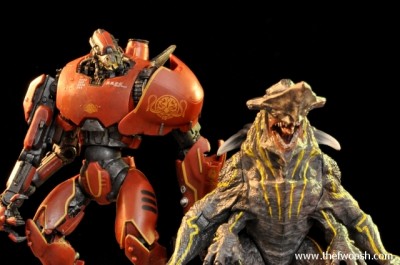 In my eyes, NECA is at the top of their game in terms of sculpt and paint for figures of this scale, and these two don’t disappoint. Crimson Typhoon (CT) sports all the intricate details that you’d expect, and they’ve done a great job with the leather-like appearance of Knifehead. Aside from a little slop on CT’s repulsor beam face, the paint is clean and well done. I particularly like the slight weathering on CT’s armor and the grimy wash they’ve given Knifehead. The paint work gives the impression that, while not necessarily battle damaged, they have seen some action.

While NECA seems pretty consistent in terms of sculpt, they still can be all over the place with articulation. This is sometimes the case even within a single line. Unfortunately, that’s what we have here. The articulation count for CT is there. He has a joint for his head and neck and ball joints for his ab, thighs, left shoulder, secondary right shoulder, and claw hand. CT also has two sets of pinned knees on each leg as well as pinned ankles, elbows, and wrists. The primary right shoulder is a simple cut. Sure, there are always some nitpicks that can be made (no bicep swivels, thigh cuts, or ball ankles would be better for balancing, etc.), but at $14.99, this is one fine action figure. 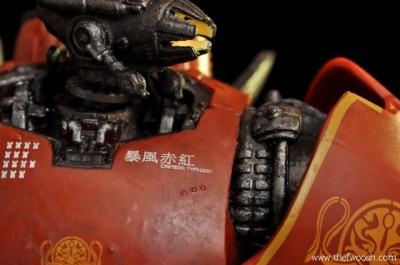 Knifehead, on the other hand, did not fare as well. He has cut shoulders and thighs and pinned elbows and knees. That’s pretty much it. The addition of a wired tail is nice, but it’s really too short to get a wide variety of poses. The jaw is also articulated. Unfortunately, you only get two posing options: all the way open and mostly all the way open. This is due to the tongue sculpt which is permanently in fly-catching mode.

Posing this Kaiju can be a challenge to say the least.

Overall, NECA has a done a decent job with the Pacific Rim figures and I’m glad to add them to the collection. For articulation nuts, CT is a blast to play with. Knifehead, while extremely limited, can still be fun provided you know what you’re getting: a big, well-sculpted lump of a monster. Only time will tell if they get awarded some permanent shelf space in my toy room, but I can say that they were a lot of fun to pose and photograph. 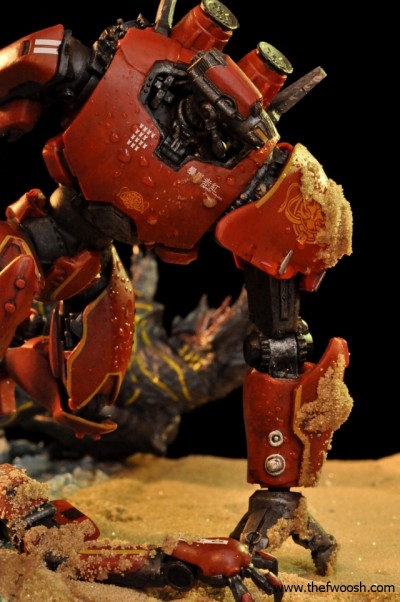 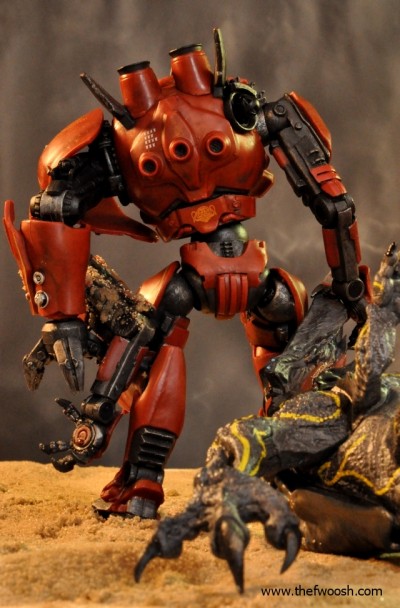 NECA’s Crimson Typhoon, Knifehead, and Gypsy Danger are in stores now and can be purchased through the links below.