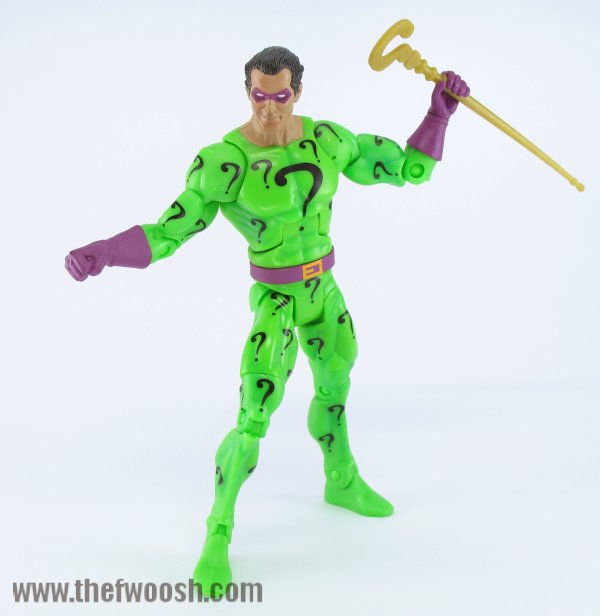 There’s a common theory that the first costume you’re exposed to for a character becomes your favorite by default. I don’t know if that’s necessarily true or not, and the debate that ensues from it will end up having the word “nostalgia” tossed around snarkily, but I do know that I prefer the Riddler in the spandex far far more than I do in the jacket and tie. Maybe because that’s “my” Riddler, maybe not. I don’t know. It’s not that I mind his more formal, suited-up appearance, but, to me, someone who wraps himself up in spandex that is covered with a bunch of question marks just seems a few percentiles crazier, and crazy is how the villains do it in Gotham. 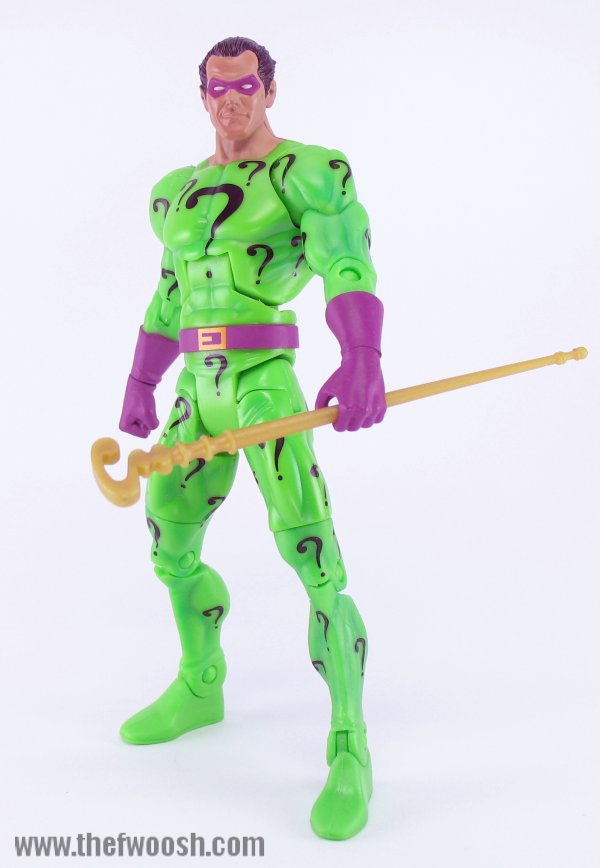 That said, I’m not averse to the Riddler deciding to dress up every once in a while. We all like to look pretty after all. But for me, when he’s sticking it to the Batman, he’s in form-fitting green. 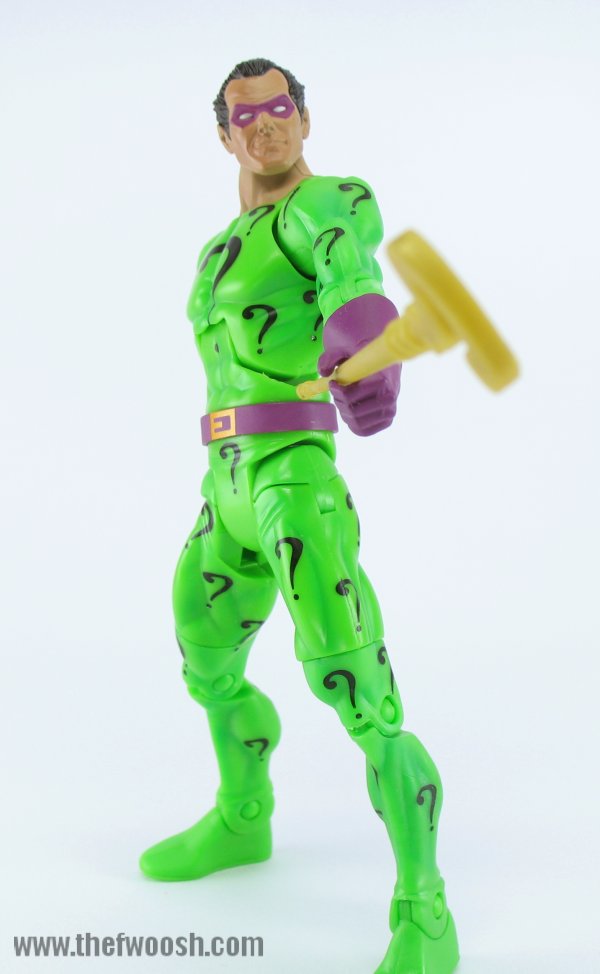 The Riddler’s spandex get-up made its debut in wave 16 of DC Universe classics, also called the Bane wave. That was a Bat-heavy wave, and as such a perfect place to drop in my favorite Riddler costume and much needed variation of one of the Batman’s main villains. 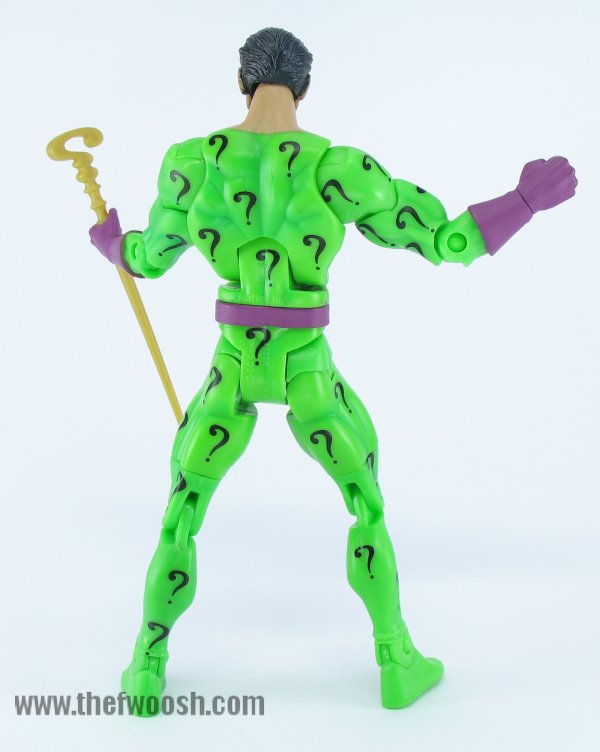 Since he’s all spandex, there’s very little new to him. He uses the standard medium-sized DCUC body with the gloved forearms and plain belt, all in perky purple and green. His head is the only newly sculpted part. The 4H do their usual good work on the head sculpt, creating an iconic-looking Riddler wearing a quasi-pompous smile like he’s confident that he’s the smartest guy in the room. Of course, that always ends up being his downfall. Maybe next time, don’t clue your adversary in to your crimes, Eddie.

The questions marks, of which there are plenty, are all clean. I’m glad he’s festooned with them, since the suited body was lacking in that area. His belt buckle is painted on, the only sign of the occasional limitations of reuse in the line. It would have been nice if there was a fully tooled belt buckle belt that could have been used on characters like this, but it’s not a big deal. 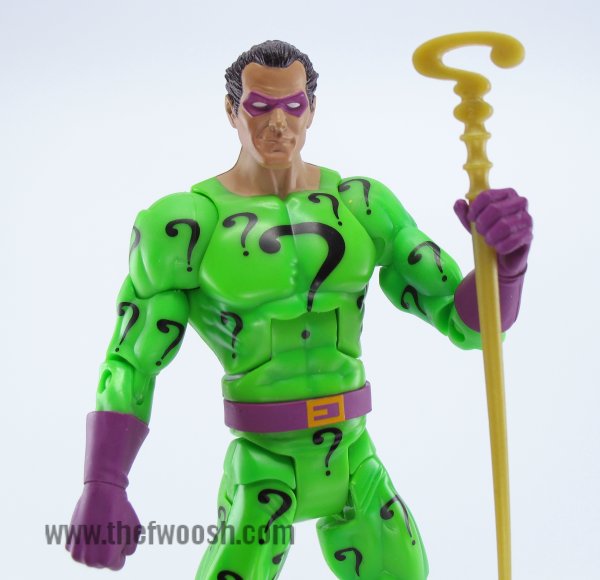 He came with the same question-mark capped cane that his suited body held. It works well here also. He’s going to need something to whack his lame-brained thugs on their heads as they stand around brainlessly. 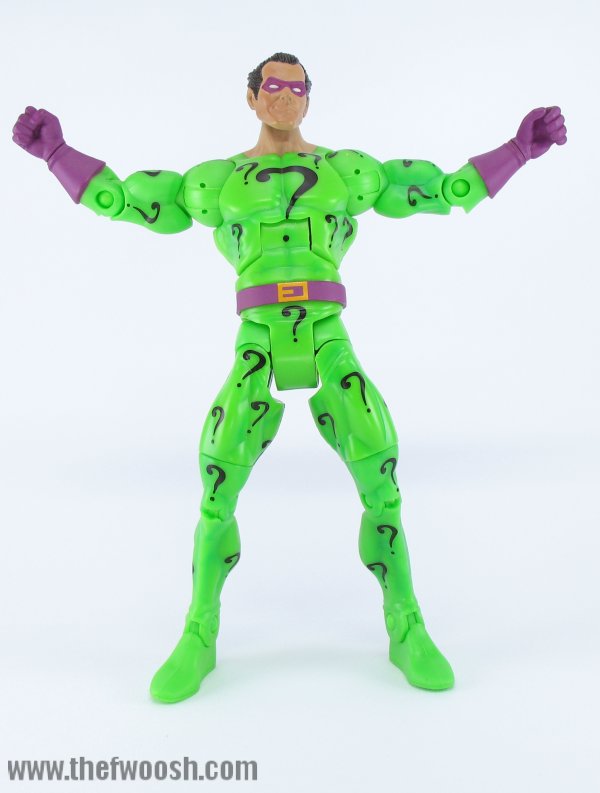 It took a lot of waves to get to this version of the Riddler, but once he was here there was no need for a redo; they nailed him right away. He’s nice, simple, and straightforward — a good representation of an iconic look. 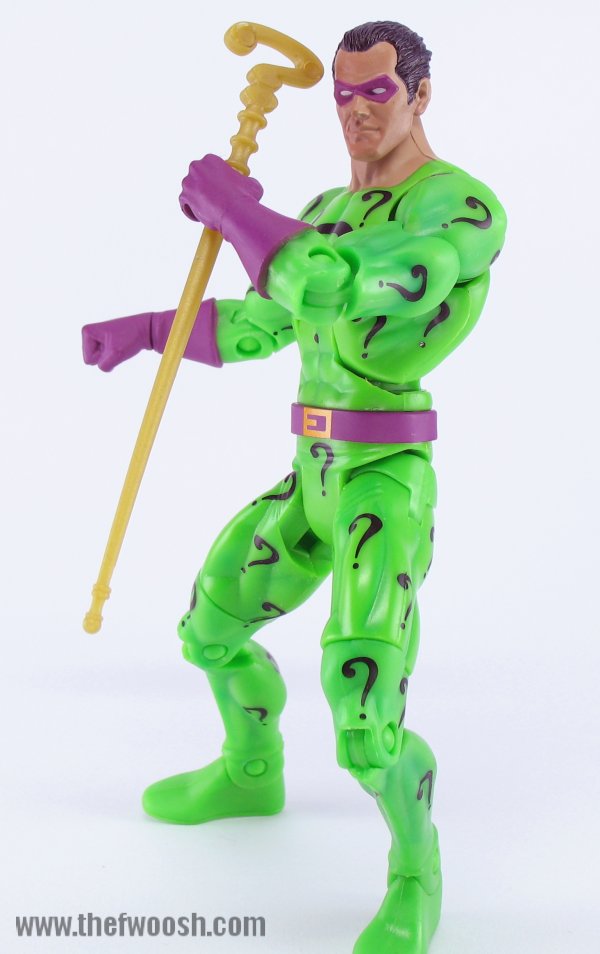