“I call the big one Bitey.” 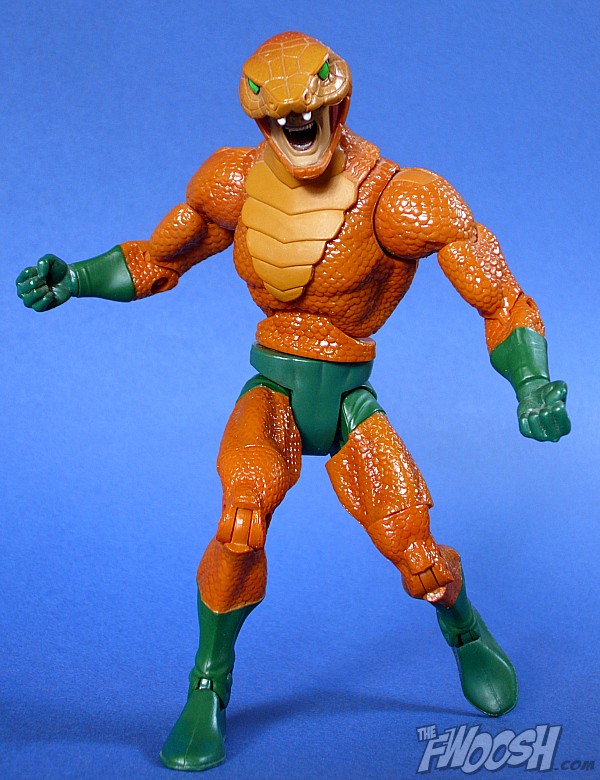 Copperhead slithered into series 12 of DC Universe Classics. His inclusion came as a surprise to collectors, but it shouldn’t have; after all, this was the line that gave us D-Listers like the Shark, Vigilante & Killer Moth. Back then it seemed that every wave offered some surprise, a new must-have character you never realized you wanted before. The 4 Horsemen excelled at making the goofiest characters cool (see: every MOTUC figure, 2008 on) and their obvious love for the DC Universe meant that even also-rans like Copperhead here got first-class treatment. 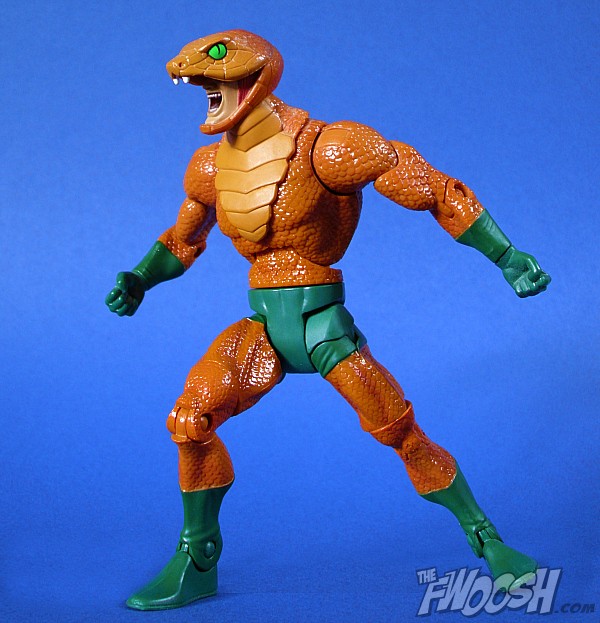 Copperhead features some of the most detailed sculpting ever seen on a DCUC figure, thanks to the clever reuse of Series Two Aquaman’s torso and arms. The Sea-King’s mail shirt translates beautifully to snake-scale, and kudos to Matty for sculpting new legs to match. The gloves and boots look nice alongside the detailed bodysuit, and really sell the “comic book” nature of the costume — after all, he’s a guy dressed like a snake. No sense in attempting any sort of real world look here, Copperhead is pure Silver Age. 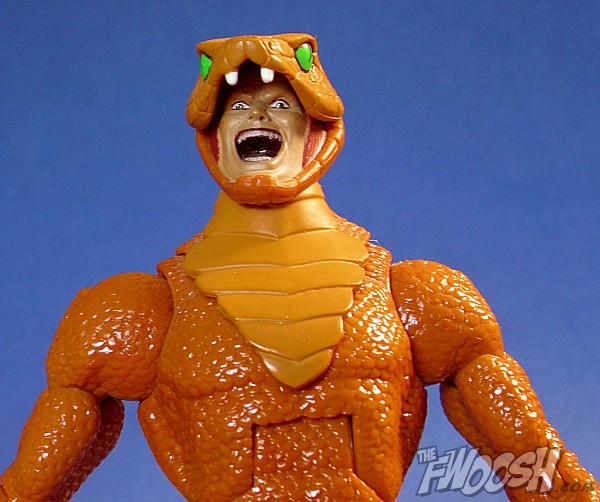 The head is clearly the star of the show here, and is perhaps one of the best in the entire DCUC line. The “mask” features some wonderfully lifelike sculpting. While stylized, the scale-patterns on the top of it’s head show the Horsemen did their herpetology homework. i’m guessing safety regulations prevented the fangs from being any longer or sharper, but that’s a minor nit. As far as the figures actual faces goes, it’s a beaut. Here’s a guy who just freakin’ loves being a super villain. I’m not sure what source art the sculptor used but it’s perfect. The tiny fangs on the inside of his mouth are easy to miss (and photgraph), but once you notice them you realize how many levels this sculpt is actually working on. 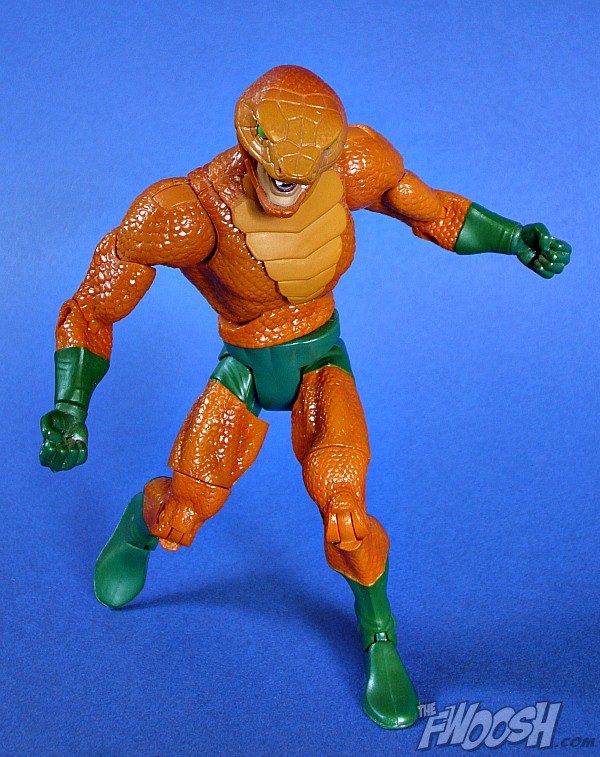 Copperhead sports a rubber overlay to represent his ventral scales. Some folks complained about it, but I’ve always accepted it’s add-on nature as the price we pay for reusing the Aquaman torso. Others have asked: where is his tail? Hey, he don’t need no stinking tail! Never mind the fact he was often shown with one, and it was a key component in his power-set: Matty had Barbies to make with that rubber. Copperhead sans tail may be less than exciting as a result, but personally, I don’t mind: displaying the DC Super Heroes Killer Croc was always a pain thanks to the 5 inches of inflexible rubber grafted to his ass. Honestly I’d rather not have it than see it done poorly. 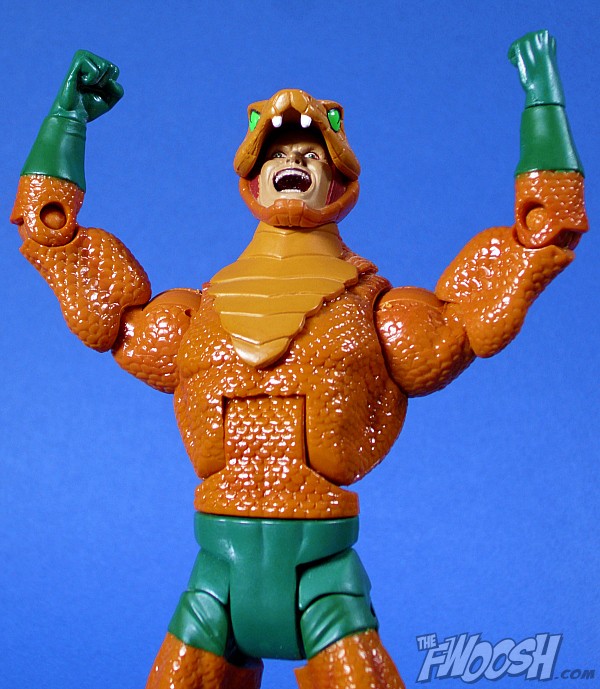 Copperhead’s paintwork is minimal but what there is looks great. The figure was molded in it’s primary color, but the abundance of orange is mitigated by a lovely gloss finish. It compliments the depth and texture beautifully, evoking the sheen of actual snakeskin. His “bib” and the front of the hood are painted a lighter shade than the rest of the body and look appropriately snake-like. The matte green used for the gloves, trunks, and boots provides a snappy contrast to all the orange, but the neon green used for the hood’s eyes is the knockout punch at the end of the round. Outlined in black with the copperhead-accurate slit pupil, the vivid hue lends an added intensity to the already-impressive sculpt that makes Copperhead a joy to behold. In fact, he wouldn’t look all that out of place on the little planet called Eternia… Articulation is standard for this guy: he features a ball-jointed head and shoulders, bicep swivels, single jointed elbows and pegged wrists. He has a mid-torso hinge, pegged waist, hinged hips, with single-jointed knees and feet. Yeah, it’s good, but Copperhead is a figure that would have definitely benefited from the added articulation Matty was tinkering with at this time. Double-jointed knees and elbows make a lot more sense on a contortionist like Copperhead than a walking corpse like Amon Sur. Still, he seems agile enough to take Aquaman on. Hey, you know what happens when two gals show up at a party wearing the same dress…

In the end, I really like this guy. His eye-catching costume, remarkable sculpt, and overall goofiness ensure he’ll always have a place in my DCUC display. He’s everything I love about this line, and comics in general. Even without the tail. 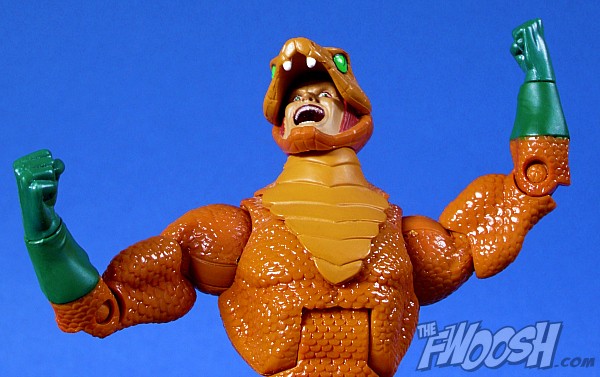 Enjoy this review? Discuss on the Fwoosh forums: http://thefwoosh.com/forum/