iGear’s Mini Warriors series, based on the original Hasbro Transformers Minibots, has proven to be among the more popular releases from the third-party world. Hench (Brawn) and UFO (Cosmos) fit nicely in a Transformers Masterpiece collection, so when news of more Mini Warriors to come hit the ‘Net, the prospect of adding even more beloved characters to this larger-scale collection was irresistible. Orders were placed posthaste and the long wait began.

Proving themselves to be more on the ball than ever, iGear shipped these out in a timely manner, so I was very pleased with the professionalism they displayed, but upon opening my set of four, I was less impressed with the figures than I expected to be. Basically, and I hate to be the bearer of bad news here, this latest batch of Mini Warriors does not live up to the standards set by Hench and UFO, or even Rager and Spray, their first efforts. There are several areas in which they fall short across the board, and some are better than others, but none of them are “perfect,” so to speak. The best of the lot is probably Cogz, who is based on Gears from the original Transformers class of ’84, so let’s take a look and see where the figure succeeds and where it comes up short. 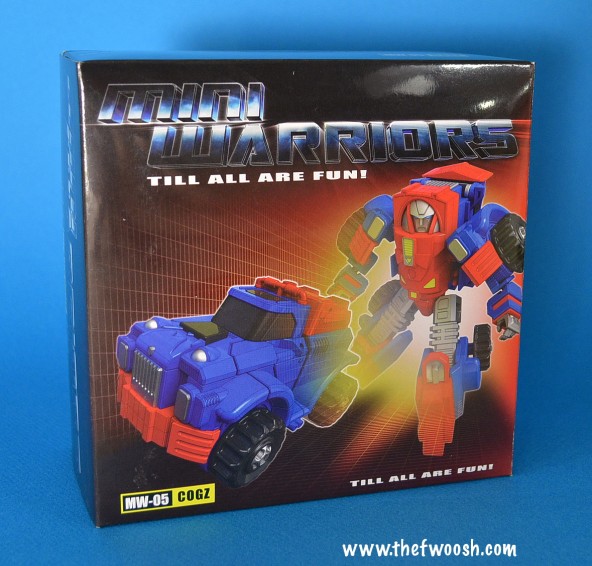 The packaging looks awesome, and the figure displayed on the front of the box also looks awesome. These were the images that were used to sell the figures when preorders went live months ago on iGear’s site. It looks like an amazing update of Gears, so there was NO WAY I was going to pass this guy up because Gears is probably my most fondly remembered Transformer toy from my childhood. He was my very first, so I’ll have an eternal soft spot for him, and based on the promo images, I had to have him. He just looked super awesome. 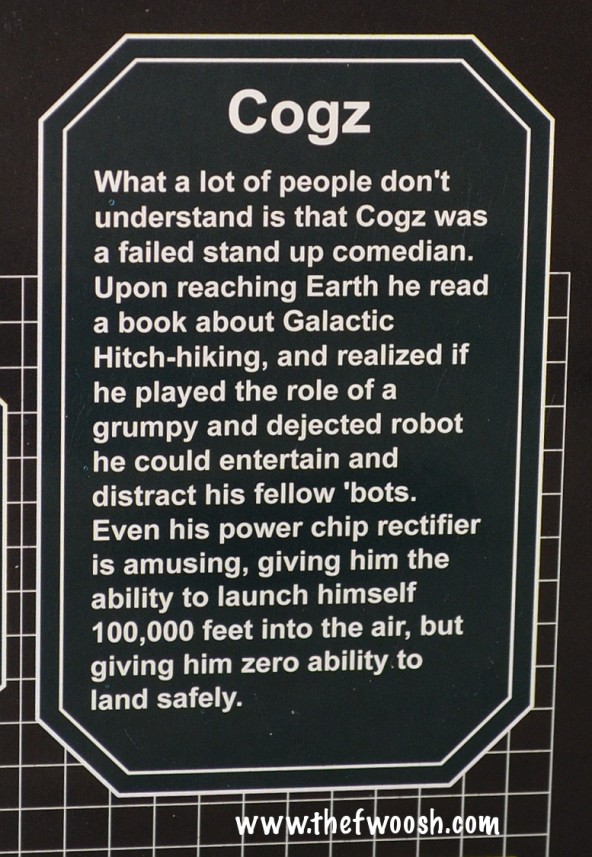 Even his bio looks great. A “failed stand-up comedian”? I love it! It adds so much personality to a character who is often considered to be the “grumpy” Autobot. His grumpiness was often thought to be so over the top as to be comical to his fellow Autobots, but the idea of his being a comedian is gold. 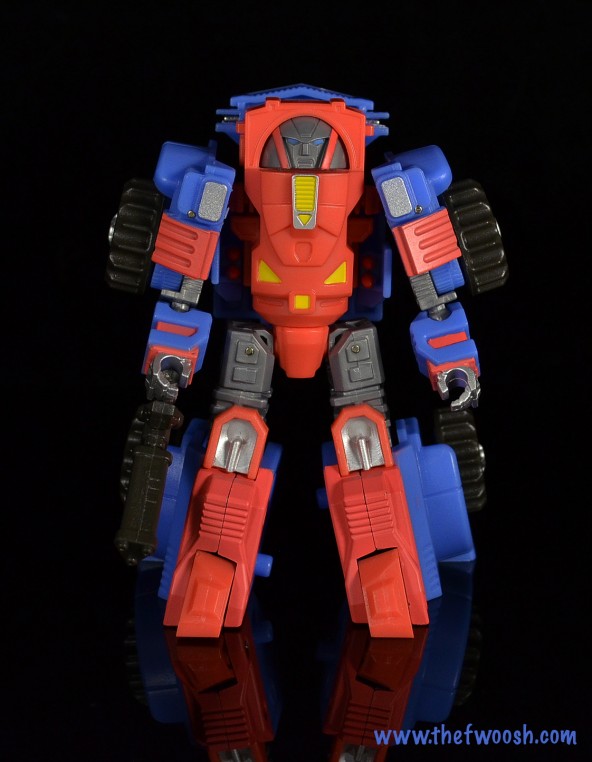 OK… what happened here? Do not adjust your monitor — the colors really are this dull. The promo image on the box led us to believe Cogz would be decked out in his signature colors, and he is, but there’s absolutely no gloss or “pop!” to the figure’s colors; he is the very definition of flat and dull. There are precious few paint apps, and the figure is molded in a very flat, matte red and blue plastic that makes him look as dull as can be on the shelf. The gray plastic used for his face is also really dark and doesn’t look all that great. Normally, any Transformers figure (third-party, Hasbro, etc.) is molded in a very glossy plastic, so his being molded in the dullest plastic imaginable makes him feel different immediately, and not really in a good way. The plastic also has a rough texture to it, sort of like the texture of the plastic used for your average computer, but not quite as gritty. It’s still not the smooth, glossy plastic we’re used to, however. It’s got a texture.

Disappointing colors aside, he really is a great update of the original Gears from ’84. All the key design elements are here and have been modernized to make him fit well in most current Transformers collections (though your mileage may vary here). He even has a swappable face that gives you the option to display him so he resembles the original toy or so he resembles his look in the comic books and cartoon.

One complaint about him I’ve been reading, and now that I have him in hand I can kind of see it, is that he may be too faithful to the original figure’s design. Their transformations are very similar, especially when it comes to the lower half of his body and his shoulders. His tires are just as obtrusive as the original, and his lower legs are huge, chunky, and hollow. His leg transformation is almost the same as the original’s; iGear did nothing to modernize it like they did with Hench’s legs, so we end up with these big, clunky legs.

But I’m happy to report, despite his design flaws, he can be posed much more dynamically than the original. It’s easy to get him in action poses since he’s generally light in weight and he balances well.

His alt mode is great because there is absolutely no mistaking who he’s supposed to be. At times it just looks like someone took a bicycle pump to the original and just blew it up to make it bigger and bam! Gears became Cogz. The design is very faithful and it tickles all the good nostalgia spots that made this figure so appealing in the first place.

While the original Gears didn’t come with a weapon of any kind, Cogz comes packing some heat. He’s got what looks to be a Gatling gun of some sort, at least that’s what it looks like based on the way he’s holding it, but there’s no ammo belt, so maybe it’s just a gun that he holds upside down. I dunno. Either way, it’s weird to see Gears wielding a gun because after decades of thinking of Gears as never carrying a weapon, it looks cool and weird at the same time. 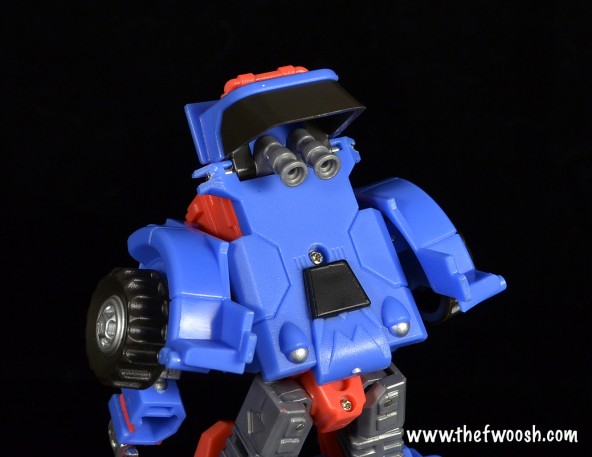 On his back, hidden under the cab, is what looks like a jet pack that could be the source of the compressed air with which he uses to hurl himself into the air. In the Marvel comic, those boosters were located in his feet, but here he wears them on his back. It makes a little more sense to me, and it could be considered one more thing that distinguishes Cogz from Gears. 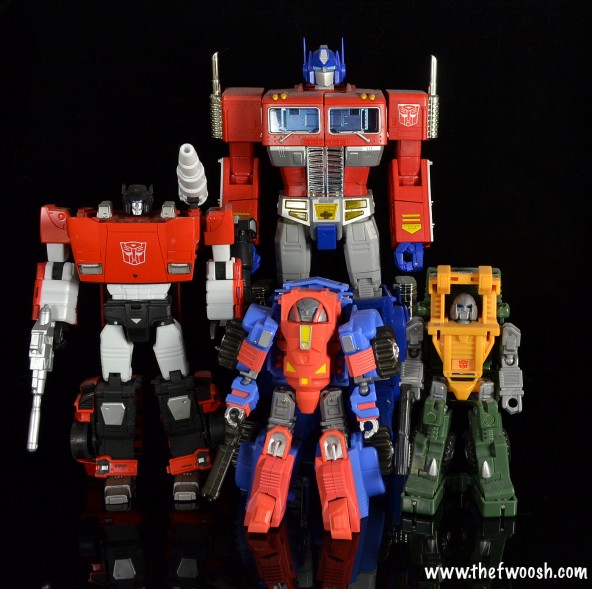 Here in the comparison shot the faded colors are clearly evident. Compared to Sideswipe and Optimus, Cogz looks as though he was left in the sun for too long. The red and blue both look so faded and dull. And that’s really my biggest nit here. I can live with the legs, but the color really does bother me. I don’t ever customize my figures these days, but I think I’m going to have to take a paintbrush to Cogz to give him colors that pop as they should.

I am happy to have him just because he’s an updated Gears, but I’d be lying if I said I wasn’t disappointed with him. I wanted to love him, I totally thought I would love him, but now that I have him, I’m not sure he was worth the premium price he commands as a third-party figure. But your mileage may vary in terms of his cost and value.

He can still be purchased at most online shops or direct from iGear.