Seeing Acid Storm this early in the Masterpiece line is a bit of a curiosity. He’s the very definition of a d-list character who only saw about three seconds of screen time in the G1 cartoon, and he has never had a prominent role in any other Transformers fiction. It’s a safe assumption that he was on nobody’s Masterpiece wish list, so it’s entirely possible that this is a case of Hasbro releasing a simple repaint in an effort to get the most out of 2012’s Masterpiece Thundercracker mold, but even that doesn’t make a whole lot of sense because lots of collectors have had their fingers crossed for Starscream or Skywarp to be re-released on this new Seeker mold. But instead of getting a Starscream or a Skywarp to match the new Thundercracker, we got Acid Storm. Huh.

That’s not to say Acid Storm isn’t worthy of a Masterpiece release; it’s just that he hasn’t had the same opportunities to curry favor with the average Transformers fan. In fact, when he was released as a deluxe-class figure in the Universe line a few years ago, many fans were so uninterested in Acid Storm as a character that they bought the figure with the sole intention of repainting him into Thundercracker (who wasn’t yet widely available at that time).  The poor guy just can’t catch a break. 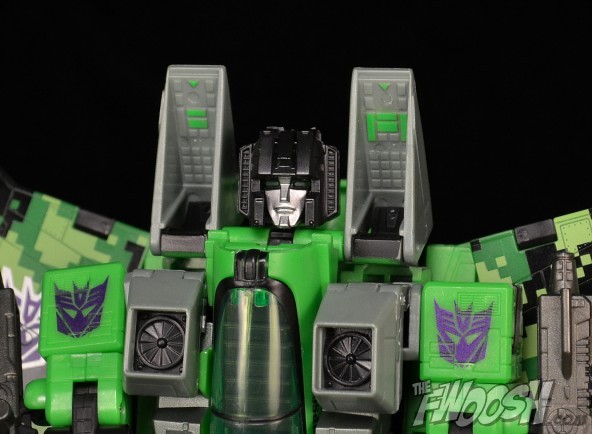 Acid Storm was recently released as a Toys R Us online exclusive in very limited numbers in conjunction with his being available for sale in very limited numbers at SDCC. Supposedly he’ll be more widely available at brick-and-morter Toys R Us stores later this summer, but Masterpiece availability at Toys R Us has been a very mixed bag in the past, so only time will tell how this plays out.

This is the first time Hasbro Masterpiece packaging has been something other than a clear window box. I have to say I think it’s an improvement because it more closely resembles Takara’s Masterpiece offerings. It is a rather big box, though, and it’s another one of those “hard to throw out” boxes. It’s quite sharp and showcases the figure nicely in the artwork while giving us a bit of info about him at the same time. One thing Hasbro could have done to make this even better, however, would have been to give the box an opening front panel so the actual figure could be seen. You know, just like any other Transformer toy Hasbro releases. Not that they’ll have any trouble moving these (potentially), but it’s asking a lot for mom to spend $75 on a toy for Billy without getting a good look at the actual toy inside first. Plus, it helps to be able to see if some scumbag removed something and returned it.

The first thing you’ll notice is the green. That is one bright, vibrant green. It almost looks as though it could glow in the dark. The other thing that immediately catches the eye is the camouflage pattern on his wings. Acid Storm’s original design was just bright green with no camo at all, but perhaps Hasbro’s decision makers thought this was too boring or something and slapped some nonsensical camo on him.

It fares better here than it did on the Universe figure, which was just truly horrid,  but this doesn’t necessarily make any more sense, either. And it’s odd that he only has it in certain areas and not all over. Truthfully, I would have preferred a solid green, like in the above image, to the green-camo mix, so I’m hoping good ol’ Reprolabels sees this as an opportunity and delivers something to cover that camo. 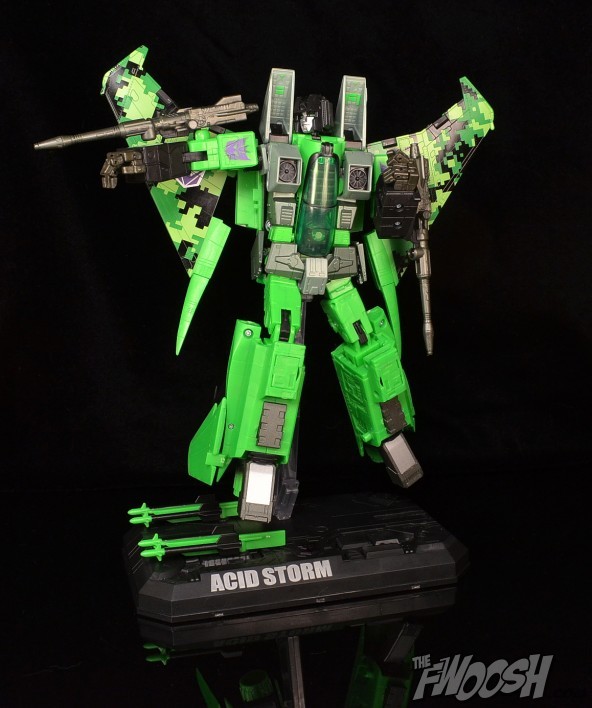 There is no doubt that he is a handsome figure. I mean, just look at him. But the camo suggests “jungle warrior” and that’s just not what Acid Storm is all about. He’s part of a Seeker sub-group known as the “Rainmakers” who have the ability to manipulate the weather patterns of whatever environment they’re in to cause corrosive acid rain to rain down on the surface. All three are decked-out in very loud, obnoxious colors to ensure they aren’t confused with the other Seekers. Acid Storm’s fluorescent green is perhaps his most defining character trait (how sad is that?), so to have it compromised with the camo on his wings takes some getting used to.

There is nothing here we haven’t seen before, so apart from his deco, there’s very little here that makes him “essential.” His colors do pop like crazy, though, so he really stands out in a Masterpiece display, and I’ll be honest — I’ve come to like how he looks when displayed with the other Masterpiece Seekers. Counting just official Hasbro and Takara releases, he’s the fifth Masterpiece Seeker released (going by characters), so it’s going to take a lot to make collectors excited about another Seeker. His colors alone may not do it, and there are many who speculate Acid Storm may shelf-warm as badly, or worse, than Thundercracker and Skywarp did. And they may be right because character recognition, and the emotional tether that creates, just isn’t there. 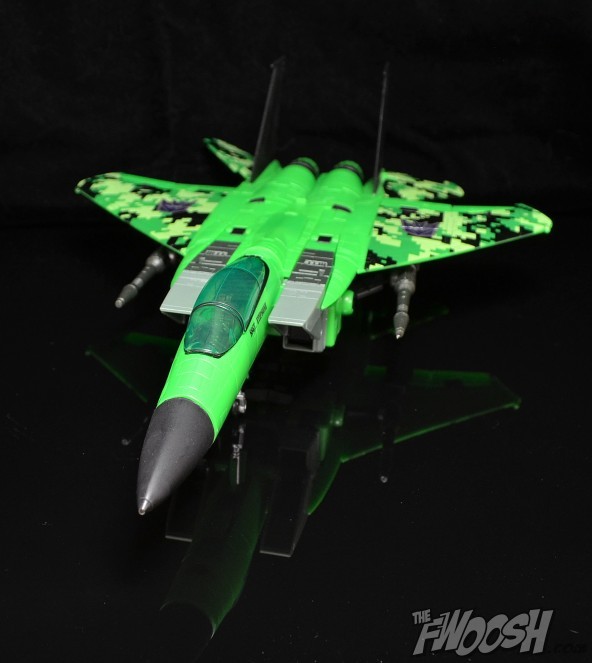 The green works even better in his jet mode, but the camo makes even less sense here since it only appears in patches, and not in places that make sense. I have to wonder in what environment is this deco going to come in handy? Deco aside, the jet mode itself is another issue because the Rainmakers are said to retain their original Cybertronic Tetrajet modes. In other words, they don’t have earth-based alt-modes (but suspension of disbelief and all that). So while this may be another decent example of the new Masterpiece Seeker mold, it doesn’t work all that well as a good Acid Storm figure, and since the Masterpiece line should be populated with definitive examples of classic Transformers characters, this figure isn’t doing Acid Storm any kind of justice. It’s nice, but it falls way short in too many ways.

There may be some mold degradation issues here to be concerned about as well. As I transformed him, his wings, all four of them, did not want to stay attached. When the first main wing popped off, I was sure it was broken because that’s never happened to me with any other Masterpiece Seeker. It wasn’t broken, fortunately, and was easily reattached, but still — he’s Fally McFallsapart. So do transform him with care.

Acid Storm is really difficult to get right now, but that will probably change once he ships in better numbers later in August. Since most collectors will be more interested in getting their hands on Soundwave, it may be downright easy to just waltz in to your local Toys R Us and pick up Acid Storm at your leisure very soon. He’s not a must-have figure by any means, but I do like him and I have no regrets buying him because it adds another Decepticon to the Masterpiece shelves, and given how many more Autobots are on the way, the Decepticons are going to need all the help they can get.

So if you’re on the market for Acid Storm, your only hope is to keep checking your local Toys R Us store, their online store, or eBay.