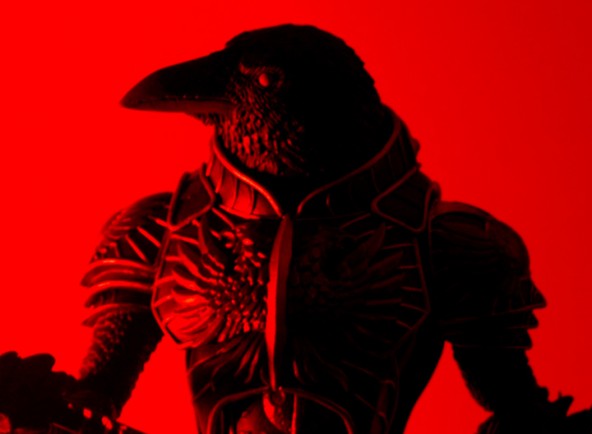 Yes! The Raven and Friends are finally coming to Kick Starter!

From The Four Horsemen:

We’ve been a little quiet about our upcoming Kickstarter campaign for the Gothitropolis Ravens figures recently, and that’s because we’ve been wrapping up the final details on the project and awaiting the final approvals from Kickstarter.

Well, our project was just given the green light by Kickstarter this morning and we’ll be launching the Gothitropolis Ravens Kickstarter campaign at 12:00am EST this coming Friday, July 12th (midnight Thursday night) and it’ll end on Tuesday, August 13th 2013! That’s 32 total days total to get in there, check out all of the various pledge levels & “stretch goals” and place your orders for what will quite possibly be the coolest line of action figures to come out in 2014.

Since this campaign will be running during the 2013 San Diego Comic Con, we’ll have all of the Ravens 2-up prototypes on display at our booth so you can drop by and check out the beautiful sculpting, the amazing paint applications and the incredible amount of detail each of these figures possesses. Also, you’ll notice in our campaign that there’s one mystery “stretch goal” figure listed that’s never been seen. What could this strange and mysterious creature be? Well that’s one mystery that we won’t be revealing at Comic Con, but he will be revealed soon after, so you’ll want to keep checking back to our Kickstarter page and to http://www.SourceHorsemen.com to find out what could be lurking behind that shadowy silhouette.

Speaking of “stretch goals”, we’ve added a couple of FANtastic “stretch goals” and an awesome “battle pack” that fans are really going to love. We’re not going to reveal what they are here, but they’re all fan requested and fan inspired items that are really going to make this project a lot more fun. There are also other really fun items to get besides just figures such as stickers, prints, t-shirts, 2-up busts and prototypes, plus an awesome “Ultimate Backer” package that not only includes a full set of the Raven action figures, but also a paid trip to Four Horsemen Studios and your very own fully painted Raven 2-up prototype with it’s very own Horsemen customized display cage!!

So be sure to check out our new Gothitropolis Ravens Kickstarter campaign, and keep checking back to both our Kickstarter page and http://www.SourceHorsemen.com for all of the details and announcements!