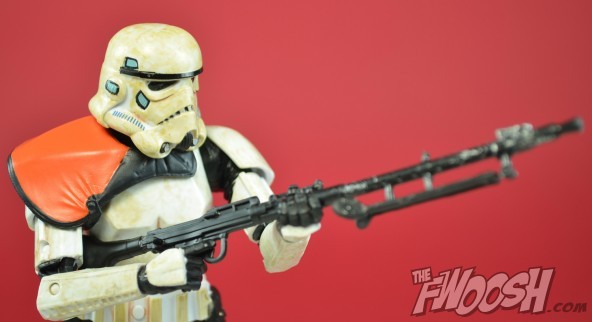 Star Wars: The Black Series. Our first ever foray into the world of our favorite space opera in 6-inch action figure form. This is kind of a big deal. Matthew K and I were fortunate enough to find the entire first series at SDCC 2013, so we will be bringing you a couple of First Looks. I am going to kick it off with a Look at the Sandtrooper. Hold on tight, the ride begins now, and it looks like it might be the most fun we have had in years with a new line.

I will admit it, Matt and I paid a bit of a premium to get our hands on these figures, but it actually was not as much as I was expecting being that they were for sale on the floor of SDCC. Everyone is in pretty high-anticipation mode for these, but they are still a few weeks away from a general release; however, even paying an amount over retail, I don’t have a single regret in buying this figure because I have not been able to put it down since I purchased it.

When we were walking through the dealer section of the convention floor, spotting them was almost surreal. I have been a Star Wars fan for most of my life, but I have never been a real Star Wars action-figure collector because I am not a big fan of 3 ¾ (or 1:18 scale, approximately) figures. So when I say I have been waiting for this line for my entire life, I say it honestly. I knew right away that I was only going to get one figure at first due to the inflated cost (I ALMOST snagged Maul too, but I have one up for preorder), and there was no doubt that the Trooper was going to be the one, even though he was about five bucks more than the rest. He is an army builder, so being able to add another to the three I already have on order seemed reasonable enough. 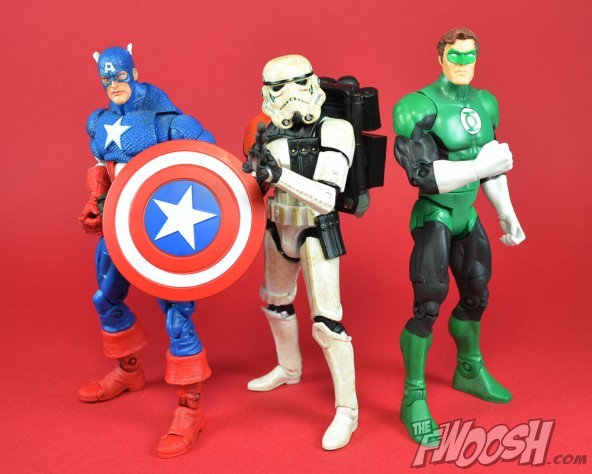 After buying them, we made a b-line to the back of the convention center and went up to the mezzanine level to go outside and open our early finds. I was a bit nervous at first; well, maybe cautious is more the word because while I knew the design work was in good hands by the crack team at Gentle Giant, you still never really know how a figure comes through production until you have the chance to play with it. So let me clear, Fwoosh Faithful, these figures are absolutely the real deal. I am still in near-disbelief that Hasbro’s first ever pass at 1:12 Star Wars figures is really this successful, and playing with the Sandtrooper is the most fun I have had with an action figure in a long time. In fact, it has reminded me that toys are meant to played with and being able to have him with me for several days away from home (instead of going quickly to the display shelf) gave me the chance to really get to know all of the articulation and aesthetics.

Right away, the figure looks great. I mean, we have been living with pictures of the prototypes for about six months now, but the translation to production plastic was handled very well. All of the figures in the first wave are completely new and unique sculpts, so there was no sacrificing any details or aesthetics in lieu of carrying over parts for reuse on a later figure. Now, I am POSITIVE that most of the Sandtrooper will be used for the eventual Stormtrooper, but in that case, it will be 100 percent appropriate. The Trooper has a slender build, especially in the legs, and all of the armor pieces come together to give that instantly-identifiable look. He is painted in a deco that ensures he has been trudging in the hot, hot sun of Tatooine for a long time and probably has as much sand stuck in every nook and cranny in that armor than the back half of a Dewback. What I mean is, he looks worn and dinged up, just as he should. I am pretty sure we will get bright white Stormtroopers, so having a dingy Sandtrooper is EXACTLY the figure you were looking for. The helmet MIGHT be extremely ever-so-slightly, just barely, hardly noticeably more “sanded up” than the rest of the figure, but to my eyes it is negligible.

The figure wears an orange pauldron on its left should that is easily removable, so you have some opportunity for variety in you army building. His hands are also sculpted to accommodate his weapons (I will get to that in just a moment) so expect trigger finger on the right and cradling hand on the left. My favorite sculpted pieces, though, are obviously the head, and, as strange as it might sound, the back. Gentle Giant nailed the helmet likeness and I cannot wait to get an old Ben Kenobi figure to mind trick the hell out of these grunts. The back piece is so cool too because I think it is iconic in its patterning and that the little circle piece of the armor has been drilled so that the back pack can fit right in, so the placement is absolutely perfect. I don’t want to jinx anything else that might be coming out later in the line, but I think they knocked this figure out of the park, and if he sets the standard for things to come, this will be the most accurately-realized Star Wars line we have ever gotten.

Looks aside, the articulation is really the thing to be excited about with this figure. As promised, the figures are all super-articulated, but the fantastic thing is that (almost) all of the joints have full functionality. So you have a lot of (well hidden) joints that actually work really, really well. Awesome action figure posing is in your future, so I beg you to play with these guys for as long as you can before you just leave them on your shelf. Every pose I have tried looks very natural with the figure, and that includes those where it is holding the long rifle in both hands. The highlights for me include the neck articulation, the rib cage, and the ankles. Yes, he does have double knees, ball hips, wrists, and all of the points you want, but the aforementioned three all work so well, and that brings the poseablity to very high level.

The rocker ankles follow the same pattern as the recent Marvel Legends figures, and the foot is attached at an angle in the back of the ridge to the ankle peg. The head makes use of both a full ball that is large enough to accommodate movement for the larger helmet, as well as a front-to-back hinge peg. For being a blank-faced drone, it makes the figure very expressive in what you can accomplish with a little bit of posing. The rib cage articulation is what really surprised me because I am normally a strong supporter of the abdominal crunch point; however, if all rib-cage points were achieved in this fashion, I would make the jump to them because, when done well, I actually prefer it. You can bend the torso to just about any angle you want, so running, aiming, or being confused are all very possible with this figure. Gentle Giant is tearing it up with articulation right now, and while you probably won’t pose a Sand Trooper as dynamically as Darth Maul, it is nice to know that you can. If I had one beef with the articulation, it would be in the shoulders. Due to the armor padding, the up-and-down range is extremely limited as that armor just gets in the way. To me it is not a big deal, buy your fanaticism will vary with what you hold dear.

Finally, the Sandtrooper is decked out with four accessories: his backpack, rifle, cannon, and blaster. All of these are screen-accurate to my eyes and they have all been given an appropriate paint job. The backpack plugs in easily and does not really get in the way of any posing. Like I said before, the plug is right in the circle in the back so it is actually really well hidden. My favorite of the weapons is the rifle, just because I love how well the figure can hold it with both hands and look realistic. The little stand thing does not actually fold down if you were wondering, but you certainly can pose this guy on his belly to shoot as though it did. 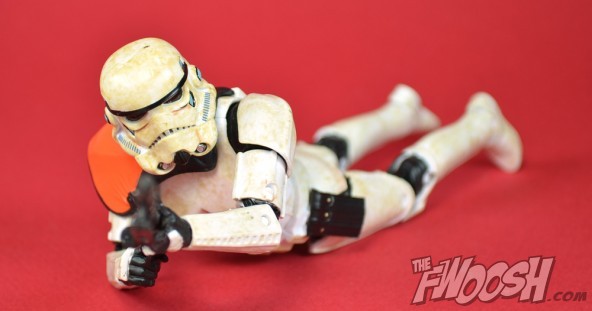 Okay, I have probably gone on for too long at this point, but since these are the first figures out of the gate, I wanted to take a little more time with them. Plus, I am in love. I really cannot wait for the rest of series one, and the fact that I am going to get Han Solo by the end of the year (outside of his block of Carbonite, that is) makes me giddy. The Sandtrooper is an outstanding figure, and when these start to hit the retail market, I would highly suggest picking one (or more) up when you see them because when a figure this good is also an army builder, they are going to go fast. The age of 6-inch Star Wars figures is finally here and I could not be any more excited for the future of this line based on this figure alone. It is going to be a fun ride because these babies are the real deal. 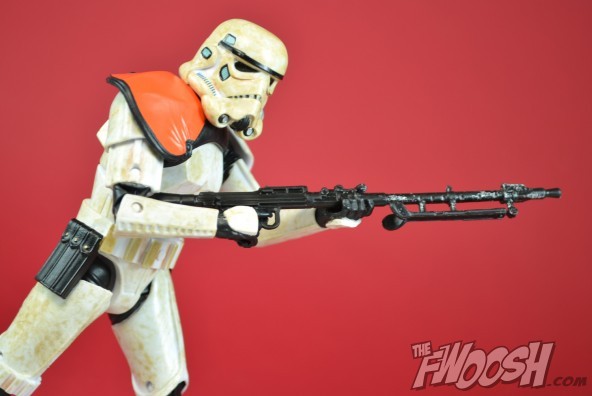