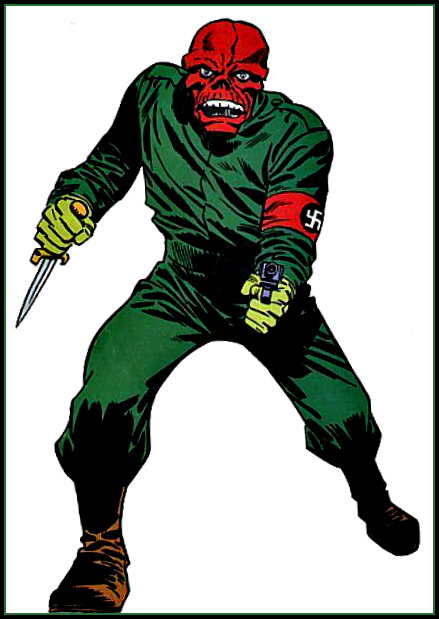 While we all love Marvel Legends, it’s true too many key characters were released in story-specific costumes that make them look out of place on our shelves. We’re stuck with off-model versions of Black Knight, Loki, and #10 himself, Herr Red Skull. Yes, the Skull has been released twice before in Marvel Legends, but both of those figures had serious flaws, the most glaring of which was not having the villain in his classic green jumpsuit. When I was growing up this was the Red Skull — seriously, it’s all the guy wore. You’d feel embarrassed for him if he wasn’t such a jerk.

So what makes this green onesie better than previous versions? At it’s core, the jump-suit succeeds because of its simplicity. Kirby knew what he was doing when he designed the Skull. The Nazi fiend’s outfit was left drab and utilitarian because it was his face that was the true horror. Kirby drew him like a bursting tumor, wild-eyed and maniacal, his jagged skinless maw twisted into a inky black rictus. Anything more elaborate than a basic bodysuit detracts from the Skull’s visual impact, although the modern business suited version works on its own level. That said, it’s the classic Skull I want for my shelf. 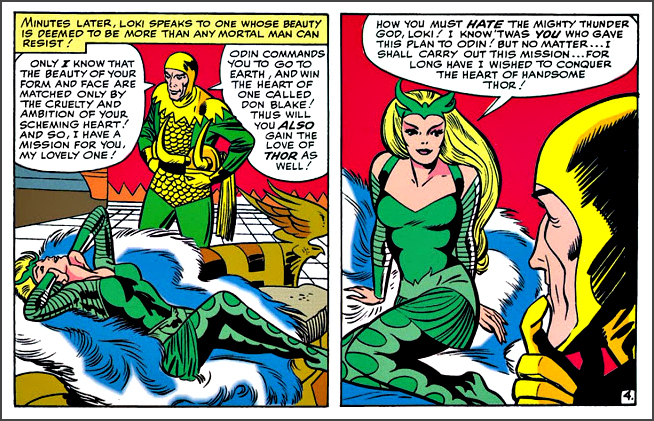 The Enchantress is a long-demanded character fans are still waiting to see appear in Marvel Legends. It must be pretty galling when a newbie like Hope Summers (who?) gets her own figure and a legendary veteran like Adora here is forced to sit it out on the sidelines. Still, with Thor Legends following in the wake of the Thunder God’s upcoming sequel, this scheming siren’s chances of being immortalized in plastic have greatly increased. My vote is for her original look. With its repeating circular motifs, slinky segmented arm bands, and distinctive Kirbyform tiara, it’s immediately recognizable as Asgardian garb, while its skin-tight nature and lack of armor or weaponry makes it clear Adora’s talents lie somewhere other than the battlefield. Let’s hope Hasbro gets the message and gives us an Enchantress we can all put on a pedestal and worship. 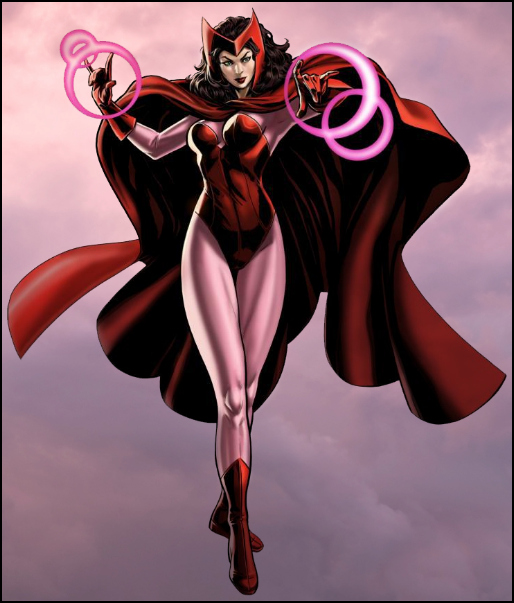 Ever since her first figure was butchered waaay back in wave 11, fans have been understandably eager to see a new version of Wanda, hopefully one without pre-teen proportions. As long-time readers of The Avengers know, Wanda has always had a curvy, almost corn-fed physique — y’know, more Christina Hendricks and less Scarlett Johansson. It would be nice to see a her new figure reflect that. A more realistically proportioned female body in Marvel Legends would be appreciated, not to mention useful for other badly-needed redos like Black Cat, Storm, and the Invisible Woman. C’mon, Hasbro, throw a few curves our way. 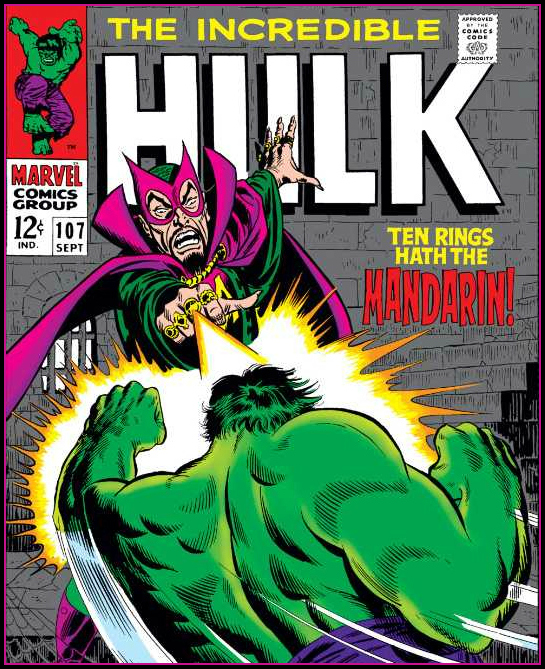 Face-Off Mandarin was universally panned for his ridiculous proportions, stupid helmet, and a rubber overskirt that prevented the figure from doing anything but lie there. (He was too heavy to stand on his own.) It’s amazing to think Hasbro hasn’t taken a pass at this classic villain in 6-inch form yet. When they do, I hope they go with his gi and karate pants look. It’s distinctive, eye-catching, and has some pretty sweet reuse potential (think Doctor Strange, Dormammu, Balder, etc.). 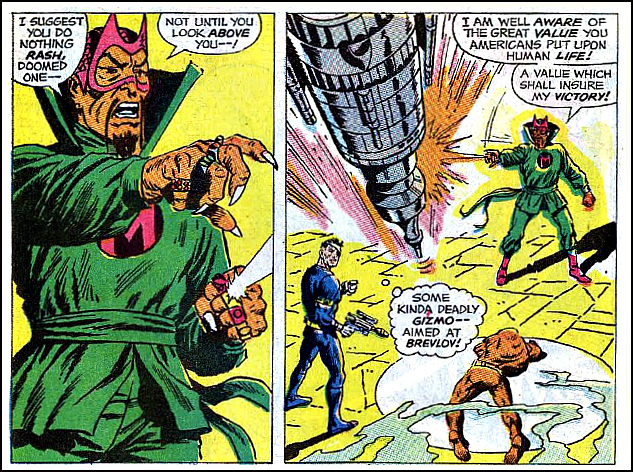 As you can see, portraying the Mandarin with weird clawed monster hands has precedent, but it still doesn’t excuse the freakish over-sized mitts ToyBiz stuck their figure with. Mandarin’s hands need to be balled up into fists, as if he’s using his rings. That’s what he does. That’s what we want. Make it happen, Hasbro. 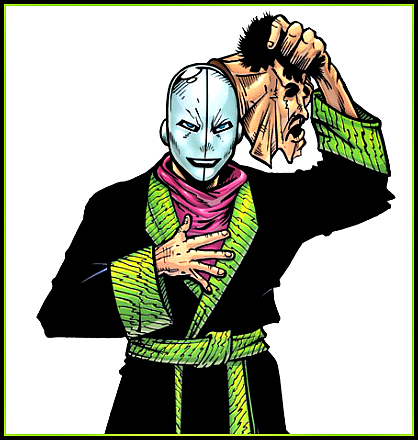 The Chameleon is a top-tier Spider-villain who’s been causing trouble in the Marvel Universe since day one, so where’s his figure already? With his ability to disguise himself as almost anybody, the character is the very definition of toyetic. Much like his figure from the memorable Spider-Man Animated Series line, the new Legends Chameleon should come packed with different heads to simulate his ability to disguise himself. If the peg-hole in Chameleon’s head is made compatible with the new standard Hasbro neck ball, his head could be put on any of those figures, creating a myriad of play and display options. How cool would it be to pop Chameleon’s smirking face onto an Ultimate Cap or Iron Man body? Very is the answer. 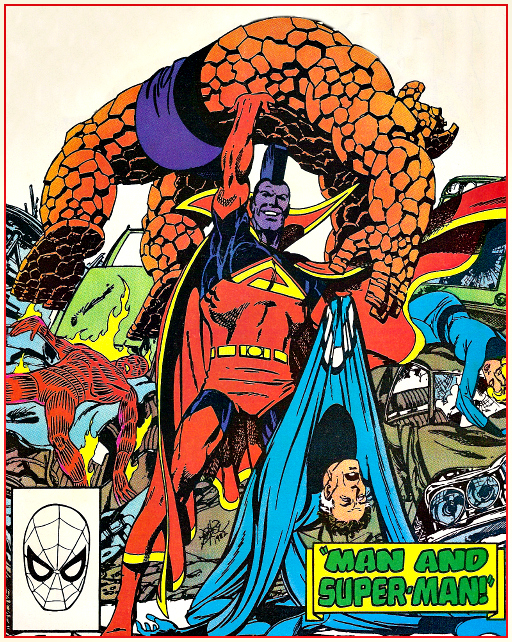 One of the most puzzling omissions has to be Gladiator. He’s appeared in a variety of media and has very vocal fan base, so what gives? It would be nice to think that Hasbro has been waiting to do him right. With the advent of the new Hyperion body, that chance has finally come. So what are the odds of Gladiator being revealed at SDCC? Peter?

That’s the spirit! Gladiator has already been represented in plastic in the smaller Marvel Universe line, so he’s clearly on Hasbro’s radar. With his consistent placing at the top of most want lists and a new dynamic body to build him on, he’s a prime candidate for inclusion in a future wave. C’mon, let’s show that punk Daken what a real mohawk looks like! 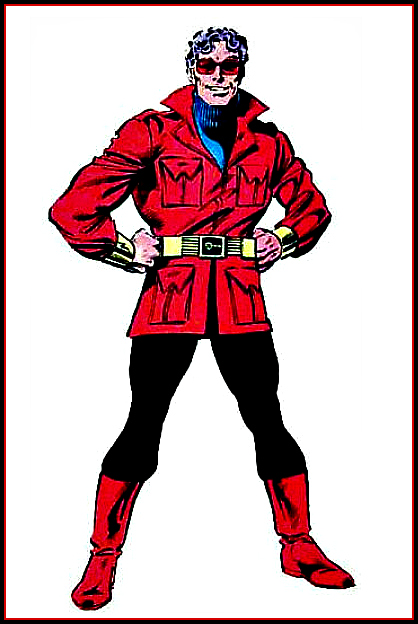 You may argue that the safari jacket and sunglasses look is dated. My considered and insightful response: so what? Superman with trunks on the outside of his costume is dated as well, but incarnations that lack this defining feature never look quite right, do they? To many people, the red safari jacket and shades look is Wonder Man. It might be corny, but corny was kind of his schtick. 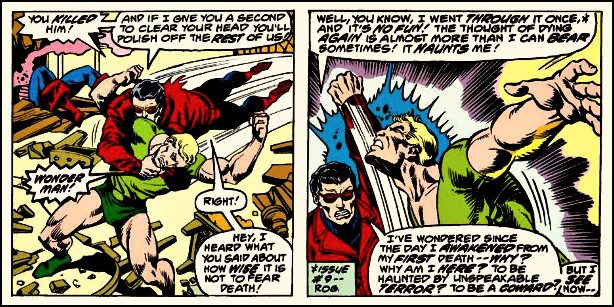 Simon has always struggled with his powers and role as a hero. He was conflicted, uncertain, plagued by self-doubt, and insecurity — a flawed character in the classic Marvel mold. In other words, corny. Changing him into some sort of unkillable being of iconic energy took all of the fun out of the guy. Also, we already have that version. If Hasbro is going to revisit Mr. Williams, let’s hope they do it right and give us this classic first. 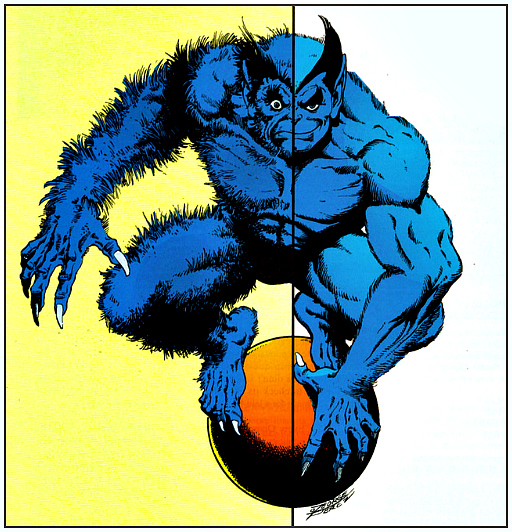 If we’re talkin’ safari-jacket Simon, then the next step is obviously fellow Avenger and hetero life-mate Hank McCoy. Featuring heavily in some of the most significant Avengers storylines of the 1970s, the Beast was the hip young dude of the group, a card-carrying intellectual who could quote Kafka and sing Mingus solos note for note. His sense of humor and outsider’s perspective helped balance a team that had grown increasingly grim and bitter in the wake of devastating personal losses. Also, he was the only one who would hang out with Wonder Man! 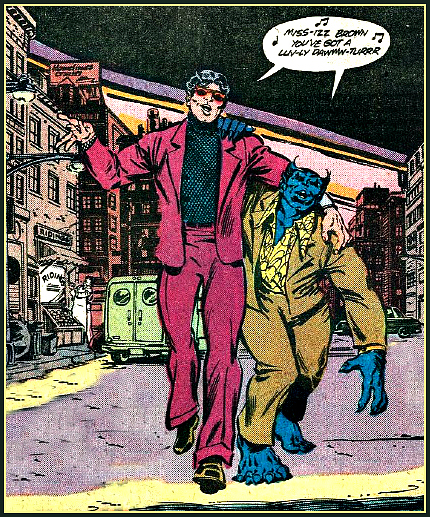 The first version of Perez Beast was overly large and featured weird articulation. It’s great that we got him so early in the line’s run, but time has not been kind to him. Fans of both the X-Men and the Avengers would gladly replace their old figure with a new, nicely articulated and properly scaled Beast. Quit monkeying around and make it happen, Hasbro! 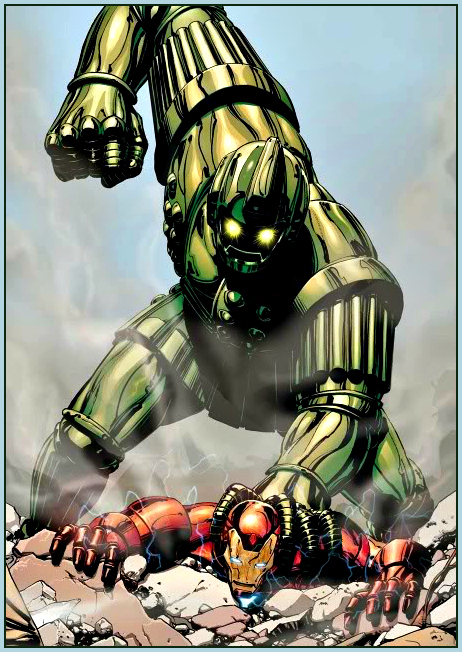 Well, what more can I possibly add? The internet has been very vocal about wanting a Classic Titanium Man,  promising to punch grandmothers, babies and/or kittens if he gets made. Hopefully it won’t go that far. T-Man has had a number of different armors over the years, but the original remains the iconic representation of the big jade Russian. Hey, you didn’t see Paul McCartney writing a song about the Concept Series Titanium Man now, did you? 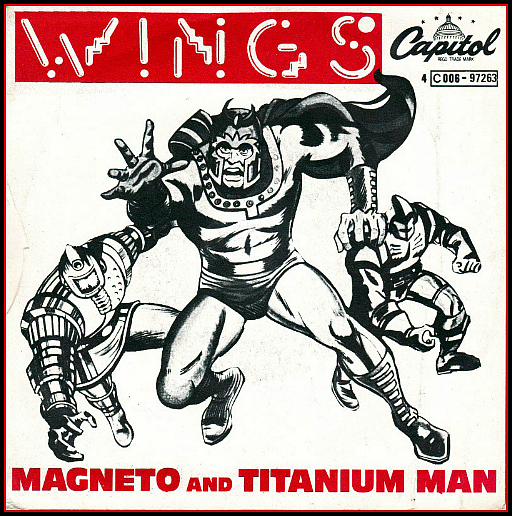 While the two that came before were, I dunno… nice gestures? T-Man needs to be released in his classic armor. Not to sound like a broken record, but Titanium Man is meant to be was massive, hulking, a mountain of blunt force to counter Iron Man’s cutting-edge tech. We’ll take him single packed, as a BAF, or redeemable only with Green Stamps — just get him to us yesterday. 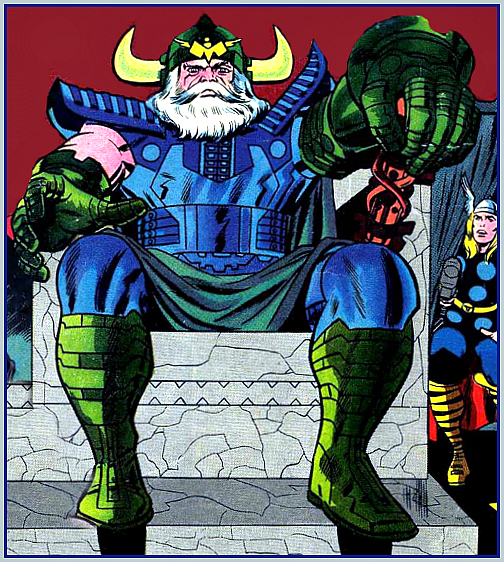 Thor’s pappy. We’ve received several nifty versions of Thor and a couple hit-or-miss Loki’s, but ol’ Whiskas here is still waiting for the hammer to fall. It’s time, Hasbro. The All-Father deserves his place in the sun. (Note: do not place your hypothetical Odin figure in the sun.) 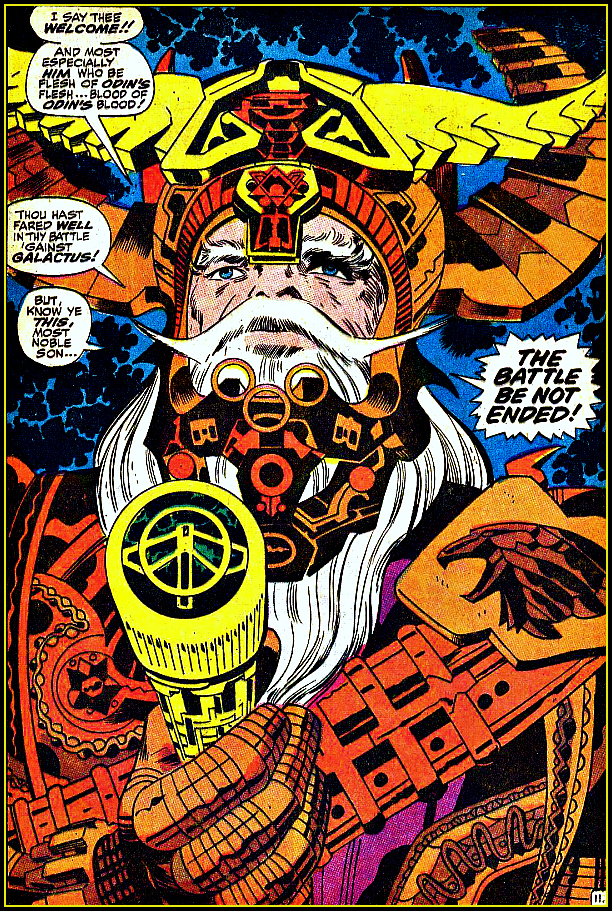 Psychedelic Santa Claus? Nope, it’s just Odin; the guy has more more fancy outfits than Liberace. That may be the problem Hasbro faces — which version of Odin should they do? He changes costumes more often than the Wasp, so it’s kinda tough to keep up. Also, I’m sure most sculptors would run for the hills when faced with a Kirby illustration of this detail, so getting someone to tackle the project might be a bit of a challenge, as well. That said, Odin is simply too important to leave unmade. With Thor 2 coming up, it’s a safe bet he’ll arrive before Ragnarok.

Discuss on the Marvel Forums