Created by corrupt scientists to be the ultimate organism of destruction, MODOK now seeks to fulfill his genetic programming — by enslaving or destroying all life on earth! Possessing a massive intellect and psychokinetic ability, MODOK’s only weakness is the frailty of his physical form. Without the assistance of his robotic exoskeleton, he can hardly even move! 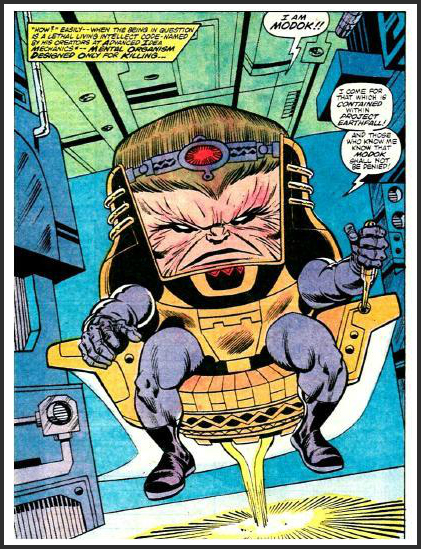 MODOK (Mental Organism Designed Only for Killing) first appeared waaay back in Tales of Suspense #93. Created by Jack Kirby and Stan Lee as a foe for the recently revived Captain America , MODOK soon graduated to full-blown Marvel menace, battling the likes of Iron Man, Hulk, and Prince Namor, the Sub-Mariner. His freakish appearance and malevolent personality made him a fan-favorite and he was featured heavily in big events like Invincible Iron Man #74 and in 1975’s “War of the Super-Villains” before being assassinated during the “Scourge” storyline that ran through various Marvel titles during 1985. This being the world of comics, MODOK was soon resurrected in the Avengers/Captain America “Taking AIM” crossover. It goes to show, you just can’t keep a good head down. 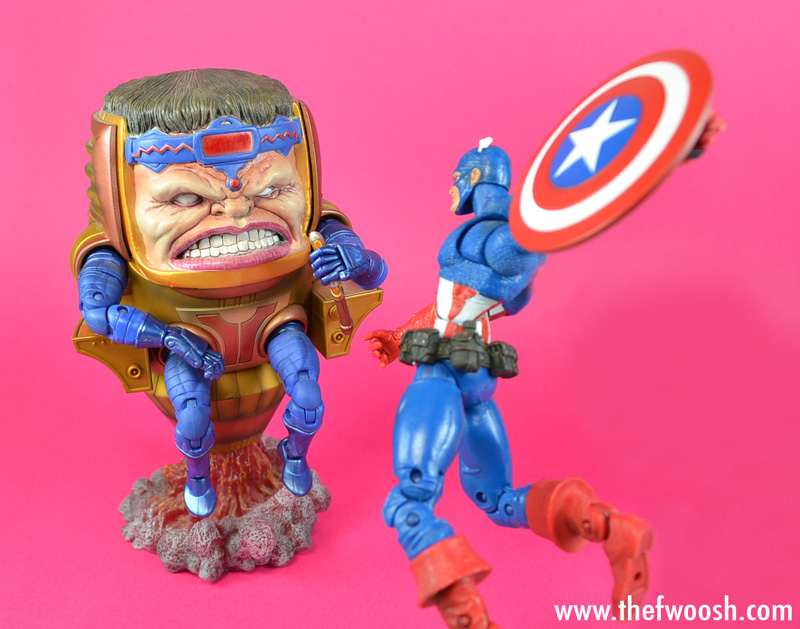 While MODOK was the recipient of a kick-ass figure as part of the 1994 Iron Man animated line, his best-known plastic representation has to be his Build-a-Figure, released in wave 15 of the ToyBiz Marvel Legends run. When it comes to sculpting, paint applications, and overall aesthetic, this is ToyBiz at its best.

I was floored when I first saw pics of this guy in the pages of Toyfare. Sure, the BAFs were getting better with every wave, but this seemed like a huge leap forward. Between the semi-translucent fire-plume base; the feast of techno-widgetry adorning his body; and the bloated, so-real-he-might-bite face, MODOK was an unlikely highlight to a year already jam-packed with Marvel goodness. 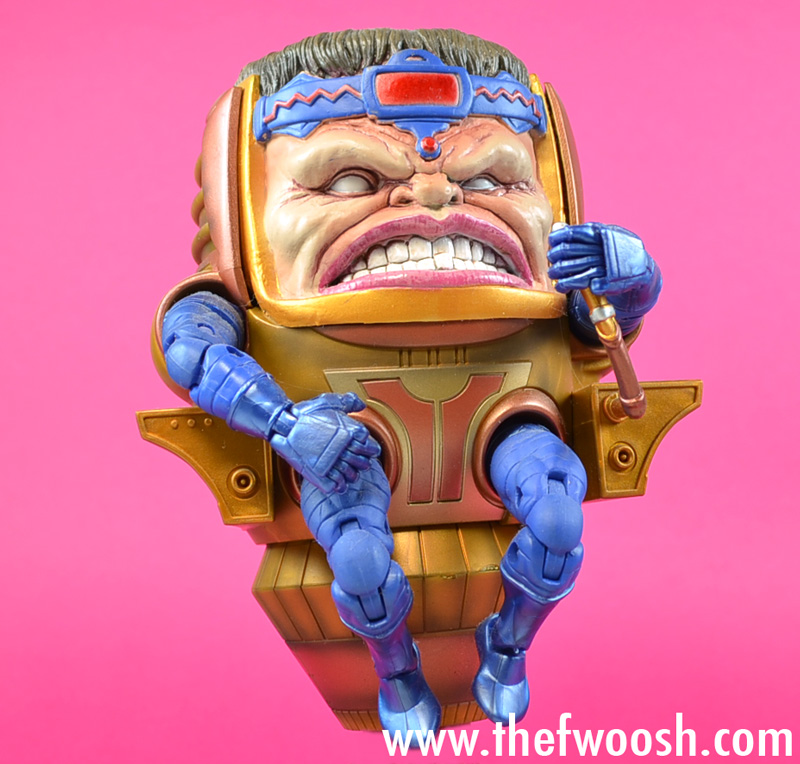 Wave 15 was made up of an eclectic mix of characters: it featured cosmic powerhouses (Beta Ray Bill and Captain Marvel) street-level heroes (Spider-Woman and Moon Knight) and two Avengers for good measure (Wasp and Thorbuster Iron Man). Some of these were great figures that have stood the test of time (Beta Ray Bill), and others are badly in need of redos (Wasp and Spider Woman), but that didn’t matter. If you were like me, you snagged them all — yes, Captain Marvel was too small and that Thorbuster Iron Man looked like dog crap, but I bought ’em anyway for the MODOK pieces. No way was I gonna miss out on this guy! As I said before, the sculpt on the Big M here is top-notch. His “body” is essentially a high-tech wheelchair and features a nice amount of detail: it’s clearly comic-inspired, as any big screen version of MODOK would be covered with overlapping plates, flaps, and all of the other fidgety doodads that today’s movie designers are obsessed with. Obviously I prefer the comic look — it’s cleaner and more distinct, making the organic bits “pop” more. Also, he drives himself around with a joystick. Classic! 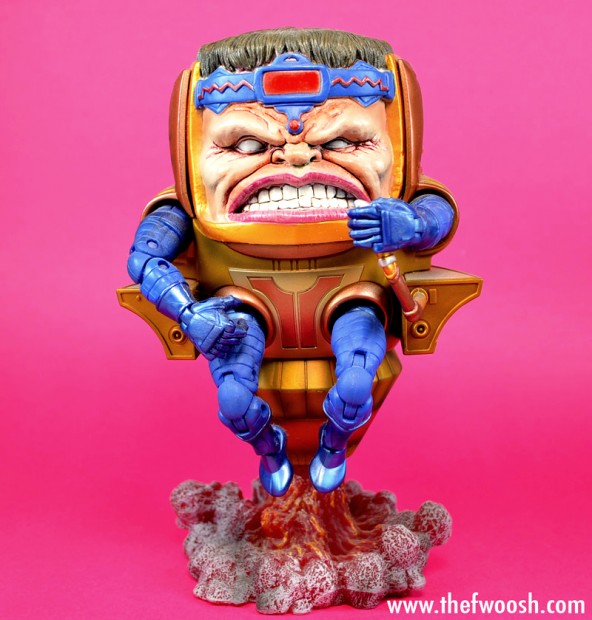 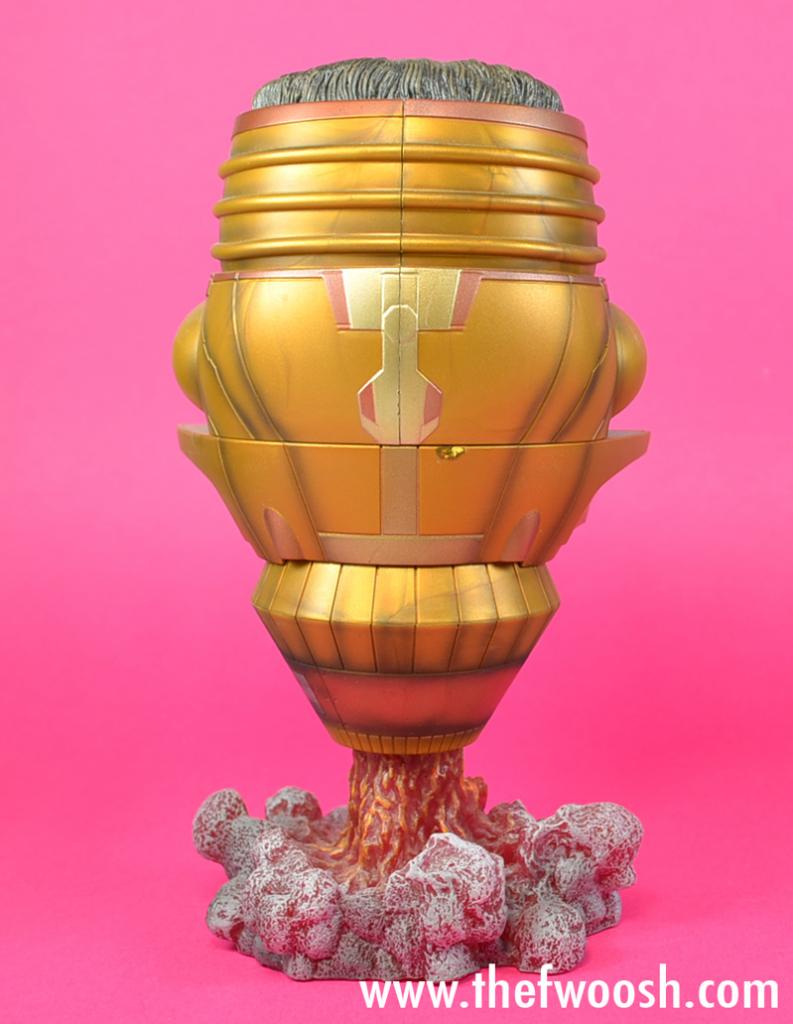 The smoke-and-fire base provides a nice visual contrast. It’s asymmetry is a relief after the consistent shapes and patterns of MODOK’s body, and the use of a different, semi-translucent plastic adds further depth to the effect. The figure actually spins a complete 360 degrees on this base, which helps alleviate MODOK’s mostly-static nature. Also, it reminds me of delicious rock candy. 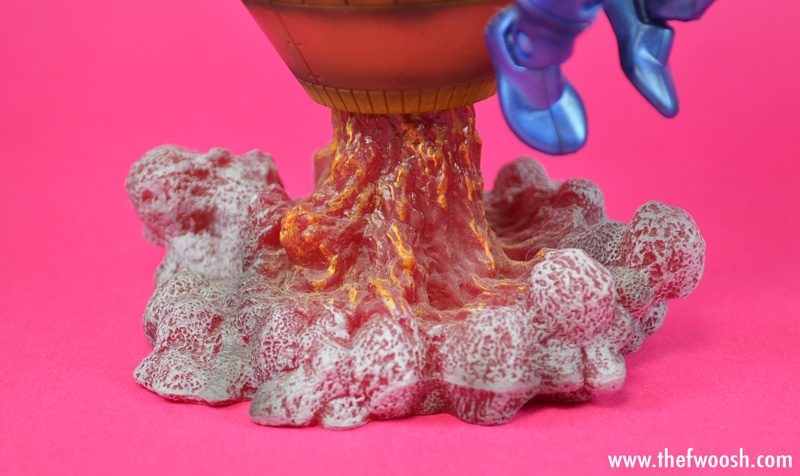 Obviously the face is the star of the show. It’s pure Kirby, infused with the weird and terrible power of the King’s line work. With his brow furrowed in concentration, eyes crinkled with scorn, and his mouth twisted into a grim rictus, MODOK radiates pain and hatred. The sinister sculpt creates a sense of anxiety, almost claustrophobia; you can feel him projecting his will into your mind, swallowing your humanity and subjugating your puny human will. Well, that’s what I get from it, anyway. Your mileage may vary. 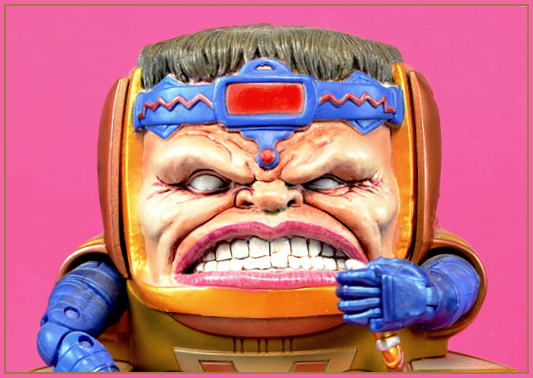 MODOK has some terrific paintwork on his face. ToyBiz really swung for the fences here and the effort was worth it. Paint wash is used to great effect: the myriad wrinkles, creases, and folds really stand out as a result of it and help sell the illusion of this being flesh, monstrously corrupt as as it may be. The pupil-less eyes are a nice eggshell color and were hit with some clear gloss for that “wet” look. It’s creepy and impressively different than the white chosen for the teeth. Also, he wears the same shade of lipstick as my grandma! 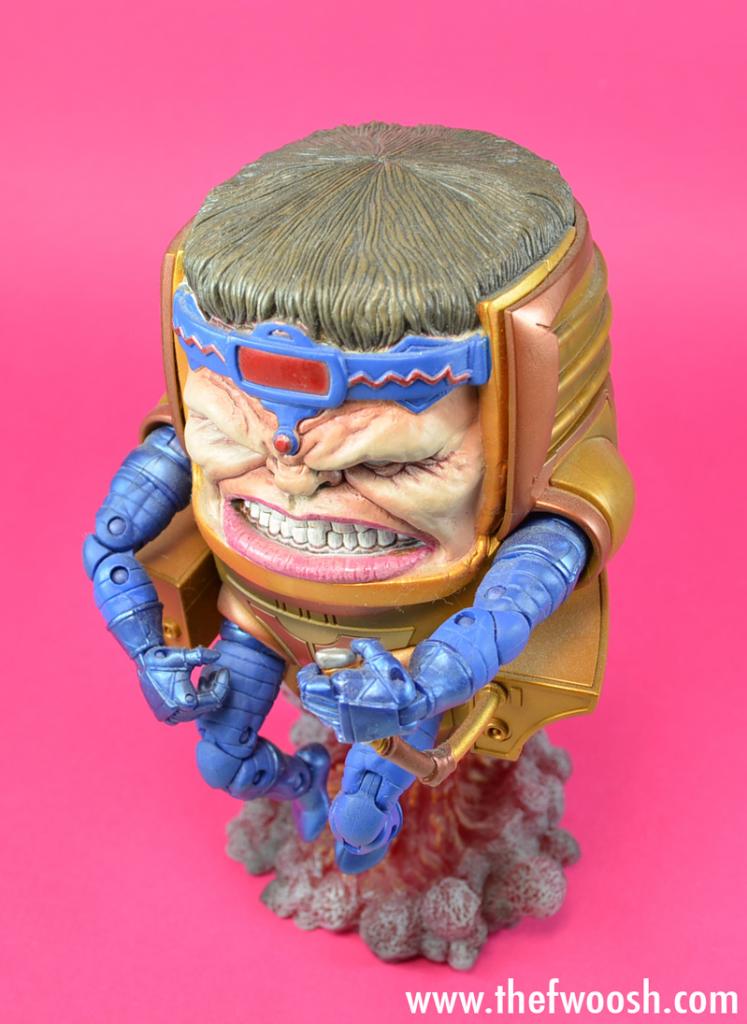 The rest of the paintwork isn’t quite as impressive. Areas like his hair could have used a little more attention — it may seem like a minor quibble, but this guy has a lot of head, and the dull brown lacks the realism of the skin tone. The gold of his body is done in several complementary tones and looks as good as could be expected. The molded purple plastic of his limbs, however, cheapen the overall tone. The metallic paint used on his gloves is nice, and the figure could have used a little more of it. Aw, hey, don’t cry, buddy! You’re still a kick-ass figure. As far as articulation goes, MODOK has a decent amount, and certainly more than you’d expect a floating head to need.  He has 31 points, to be exact. Just let that sink in for a second — this guy has 31 points of articulation. If MODOK were released to today, odds are he wouldn’t have half that. It goes to show how dedicated ToyBiz was to making sure that every figure they manufactured was the best it could possibly be — a far cry from the modern model of reduced articulation, limited paint applications, and mandatory parts reuse. Where have all the good times gone? The news that MODOK was to be the final ToyBiz Marvel Legends BAF was just as unexpected as the news he was coming in the first place. It makes his inclusion all the more bittersweet, a sign of where we might have gone had things happened differently. Still, when all is said and done, MODOK is a remarkable achievement. His figure beat the odds, surpassing all expectations to stand as one of the highlights of the ToyBiz era. As you can see, he looks terrific alongside the modern Hasbro Legends, and even more formidable when pitted against Marvel Universe figures. He’s still relatively cheap, so if you’re somehow without him, you owe it to yourself to track one down, if only to keep your Arnim Zola figure company.