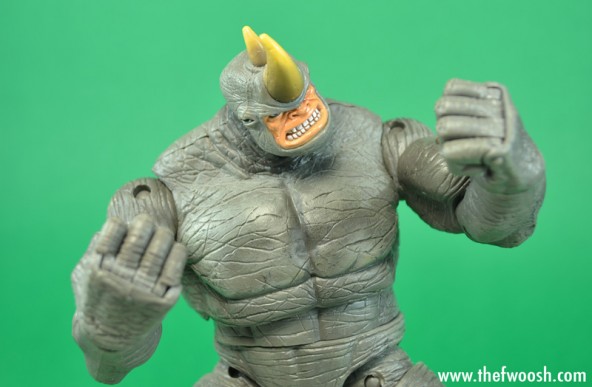 As you have probably noticed, we are making a concerted effort to start to bolster our archive resources for several different action-figure lines. One of the cool things about that is being able to take the chance to stop and “smell the roses” and appreciate some of the things that are actually sitting on the shelf, instead of just talking about what is next or what is yet to come into our plastic lives. Marvel Legends is obviously a big part of this, and I cannot convey how happy it makes me to be able to take some time and revisit one of the best figures from that line: the Fearsome Foes Rhino!

Whether you are new to this figure or acutely aware of his existence over the past several years, there is certainly an opportunity to reflect on what I consider to be one of the best plastic representations of any comic character ever. The Toy Biz Marvel Legends days have become legendary in their own right, and while several things are looked upon with rose-colored glasses, the innovations (good and bad) and value aspect are things that are as dead as the dodo at this point. The fact that this figure, that could very well be considered a “deluxe” release (see: more expensive), was a part of a BOX SET and is a completely unique sculpt is something that becomes more and more amazing as time goes by.

Did you know that this figure was designed and sculpted by the incomparable Four Horsemen? Yes, they have made their marks in the DC and Masters of the Universe worlds for over a decade now, but they did have a chance to dabble in the Marvel world, albeit in a far too limited capacity. Back in about 2007, several collector lines moved to the model of standardized parts and heavy reuse, and that still holds the standard today, but man, leading up to that time, getting figures like Rhino, the Abomination, and countless unique Hulks was “ain’t no thang” to us spoiled collectors. Sure, ML was not always balanced in that regard, and pushing some envelopes was done just for the sake of doing so resulting in a final line that does not have a whole lot of cohesion, but some of the gems were certainly worth some of the failures. 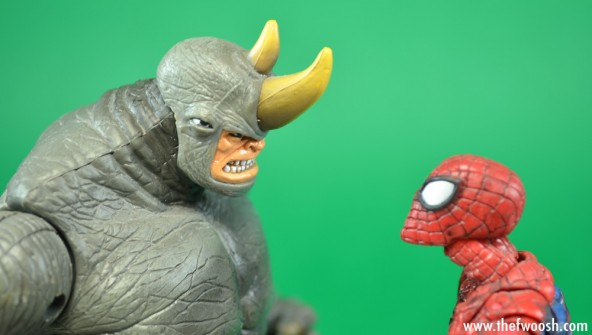 Now, I don’t delude myself with crying over a lost love that is fondly remembered as the “greatest thing ever,” but I still recognize that some of the standout Toy Biz Marvel Legends are still some of the best action figures that I own. So when I say that I don’t believe I will ever need another Marvel Legends Rhino figure, you can know that I am being honest. Don’t get me wrong, I love the larger scale Marvel Select Rhino too, but for the ML collection, he is one of my gold-standard representations.

His sculpt is (obviously) beautiful and from his splayed toes to full-faced sneer, it captures every little detail of the classic and iconic look of the Rhino. His “hide” is lined with creases and crevices, nooks and crannies that make most of the figure look like an anthropomorphized rhinoceros, and while Toy Biz could have probably sold him as flat grey in color, there is a lot of highlighting and airbrushing to help bring out even the most subtle of details. The Four Horsemen do beautiful work and they are prided in leaving no fanboy detail nod unrecognized, so the rhino eyes on the side of his head are something that fills me with giddy glee. This figure makes you wonder what a 4H Marvel Legends line with the budget of days of yore would have looked like… I don’t even want to think about it as it would make me weep. 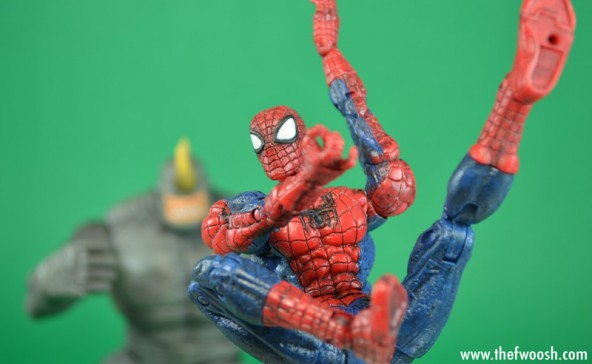 This figure also shows that, when they are not put in such a heavy reuse sandbox, the Horsemen also really know how to balance a unique sculpt with an articulation scheme that is at the forefront of the times. Indeed, the beautiful sculpt is actually accentuated with an articulation scheme that feature more points than most figures do today. Normally I am not overly fussed about missing a mid-foot hinge, but on a big character like Rhino, it actually adds a lot of personality to his posing options. That being said, the finger articulation is still something that is mostly ineffective here, and while he should ALWAYS be posed with his clenched fists, the first knuckle movement does allow him to check for any dirt that might be hiding under his nails. 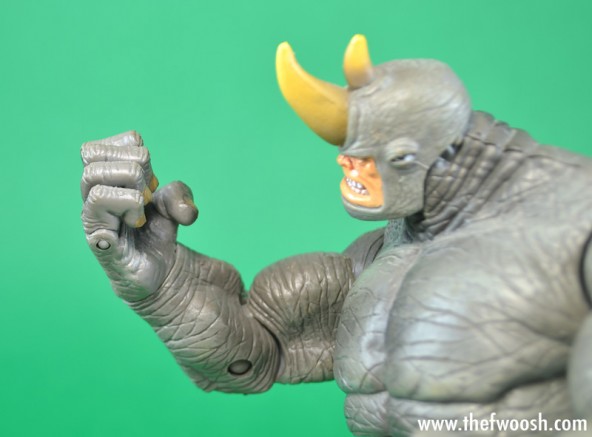 The rest of the articulation might seem pretty standard for a “super-articulated” figure, but it is integrated so nicely. Gigantic ball joints at the shoulder and hips are some of my biggest pet peeves of the ML run, but due to his shape and size, coupled with the integration, the shoulder and hip balls are some of the cleanest looking of any Marvel figure. He does not  have double elbow joints, as they would probably be of little use anyway, but his double knees ensure that he can “charge” and fight with the best of them.

Revisiting this figure reminds me that he is still one of the best Marvel Legends figures I own. While the Fearsome Foes box set was pretty stellar in its own right as a whole, Rhino is definitely the standout from the group. The character is going to get a Hollywood-sized dose of spotlight in the coming year as he will be played by Paul Giamati (!?!) in the next Spider-Man movie. That probably means that we will see an influx of new Rhino figures, but any of them will be very hard-pressed to dethrone the current rough-hided regal of the Marvel Legends Spider-Man foes sect. If you have this figure, treasure him, if not, dump some lesser figures onto eBay so you can get some cash to pick him up.