We have a bit of a Fantastic Four theme going right now, don’t we? Well, there are several reasons for that, but the fact that they are Marvel’s first family has to be a big one; however, this list in particular pulls more from the fact that, as a corner of the larger Marvel Universe, the Fantastic Four are pretty under-represented in terms having good action figures, especially in the Marvel Legends scale.

So what characters would enter a Top Five for the Fantastic Four in terms of absolutely most-needed action figures? Who does Hasbro need to get to immediately in order to give due justice to this all-important familial faction? Well, I am going to let them off the hook a bit and shave this list down to FOUR entrants instead of FIVE. Does that mean they are going to catch a break? I am not quite sure because that leaves a list of personas that just have to be nailed in plastic. So the Fantastic Four list drops from five to four… any guesses on who they might be?

Of all of the real members of the First Family, I think Johnny has had the best shake in terms of six-inch action figures. There have been some nicely conceived comic-inspired figures (dating all the way back to the look of the Toy Biz series two Torch), as well as some slick movie figures. We have seen flame-on and off, solids and translucents, and even action feature and plain old super-poseable entries in the past several years. The only problem is that a good, classic, comic-inspired figure has not really been done since that aforementioned ML2 figure, and, even then, his articulation was never all it could have been. I want a solid flame-on Torch with lots of nice detailing and the comic-inspired “fire lines” painted on his body. Oh, and lots of useful articulation to go along with it. The powered-up version has to be the default choice here, but if a Johnny Storm figure could be fudged as a variant, I would gladly take it, just so long as he is in his classic BLUES and BLACKS. 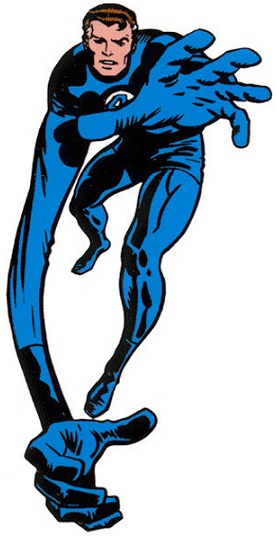 Reed Richards is so toyetic that I really cannot stand that I am completely unhappy with the various interpretations of him I own. None of them have been absolutely horrible, but they all miss the mark in some way or another. We ended up getting a drag queen Reed with a Katherine Hepburn-inspired face back in ML5 when we were shown a fantastic classic Kirby mug on the prototype. Several figures followed using that now hopelessly outdated base body, but most of them had that over-stylized “Ringo” head sculpt. Now, I absolutely love Mike Weiringo and I miss him terribly, but I don’t want an exacting single influence on these figures. Hasbro actually released a pretty good stretched-out Reed, but he is in that blasted white and blue color scheme that pales in comparison to the team’s iconic colors. Stretched or not, swappable or bendy, I really don’t care — just give me a good Reed Richards.

Poor Sue. Poor, poor Sue. She has an extremely strong argument to be number one on this list because, frankly, she has NEVER had a good six-inch figure. Ever. In fact, when several fans would rather have that awful Jessica Alba on their shelf instead of an iconic comic iteration, something is terribly amiss. She suffers from a couple of things in the grand scheme: she is a female figure (toy companies just love to limit our intake of female characters) and all of the costume and likeness issues that plague her husband shine down on her as well. The fact is, she is actually a pretty basic design that would be very easy to do in plastic, and do well. If one figure was possible with no variants, she would need to be in black and blue like everyone else (no exceptions here, it is the only way to go for the F4), a bit of clear phasing in an arm and leg to show her powers, a feminine face sculpt, and shoulder-length hair. That is it. No pinheads, no cartoonish rendering, none of it. Sue is the glue of the tried-and-true black-and-blue crew, but our regular due is to get the screw when we add her to our Marvel retinue. Boo-hoo.

Let’s fix that, without further adieu.

I will stop now. 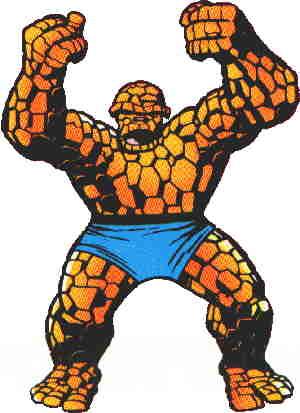 But begin anew! Full disclosure: Ben Grimm is my favorite Marvel character. He is also one of the best characters in the universe and he is extremely important. He has also had a lot of actions figures. Of those, most of them have not really been worth a damn and it baffles my mind that I do not have an amazing, classic Thing figure on my shelf. Yes, on sheer number of “almost there” attempts, Ben has had better luck than Sue, but he is more important to the action figure universe, so he has to be number one. In my opinion, the best six-inch-scale Grimm is still the flippin’ Ultimate version with the action feature from that first series of Toy Biz F4 figures. I am pretty sure that he was a Four Horseman effort, they have not gotten to take much of a crack at the MU, unfortunately. For the take, he is absolutely beautiful, so I don’t want to sound all bitter because I do like that figure a lot, but I just need a classic version. I say that because the best-looking classic Thing figure I have is the Superhero Showdown (remember those?) four-inch figure. That is a crying SHAME. That figure is so pretty and it is (in my opinion) the completely wrong scale. Everything else is pretty much garbage. The original ML Toy Biz Thing has a great head sculpt, but that is it. Then we got that ridiculous “first appearance” (my ass) figure, a Thing in pants (ALWAYS a no-no), and the infamous “turtle” Thing. The fact that these offerings have been so mediocre hurts even more because it is not like we have not gotten our chances, it is just that for a classic Thing figure, they have all failed.

I know, this might seem a little tongue-in-cheek, but it is not. The F4 is my favorite corner of Marvel and it is just ridiculous that I don’t have good classic Legends figures. I am not asking for anything complicated here – give us the cohesive team with their iconic looks (if you need to take reference, see some Kirby and Byrne) in blue and black with standard Legends articulation. That is it. Nothing fancy or edgy, just the solid First Family of Marvel. After we get them, then we can talk about supporting and villainous characters. It is headache-inducing to have to ask for this at this point, but, damnit – we need, and deserve, FANTASTIC Fantastic Four figures!