I have to be brutally honest: despite all the Thing figures that have been pumped out, we’ve never had a really good Thing figure from Marvel Legends. We’ve had some that were decent looking, but too large; we’ve had some that were the right size, but were aesthetically off for one reason or the other; but there has never been a truly great representation of Benjamin J. Grimm. Why? I don’t know. People crazy.

Now, VeeBee has already covered the top “five” Fantastic Four figures we need, and since bashful Benjy is a part of that teamily (that’s team and family, true believers), there will be a single area of overlap, but that only resonates with how necessary a truly great Thing figure is to the collections. So with that, the top-five Thing figures needed in action figure form commences forthwith.

I know, I know — we have one. But in truth, that was Kirby by way of Art Adams. Now, I have nothing against the man whose profession and name are so in synch, and though there there are some similarities, it really doesn’t do it for me. The height is pretty spot-on, so that’s the good. But the bad… for starters, there’s the face. Constipated? Boil on his backside? I don’t know. It just doesn’t work well. And while the texture is OK, it’s a bit… too much. I need a new one, and one that’s faithful to the original art and not an interpretation.

Say whaaaaaaaaa? Yes, She-Thing. I want a damn She-Thing. We’ve got a She-Hulk, a Spider-Woman, and so forth; I need a She-thing. A Thing with boobs. You know why? Because that’s wacky awesome. While clearly this is not Ben, I still think it has some necessary value to the collection because rocky boobs. That’s how I roll. The great part is it can reuse everything from the regular Ben figure except for the torso. Because… you know… boobies.

This would be a great exclusive figure somewhere. Take the brand new Thing figure that they should make and make a swappable head for when he had been cured and wore a Thing suit as Ben Grimm. Being able to pose the figure with Ben’s head on top of the Thing’s body and him holding his head is so surreal that this has to happen.

I love this look. Loooove it. If not for a more pressing and urgent need, it would make the top spot, but number two is still respectable. Thing got a new look and got a dramatic upsurge in strength when he looked like this. He’d require a completely original sculpt, so his chances are as futile as getting a Slapstick figure, but still, he would make a killer figure.

And finally, the number one spot goes to: 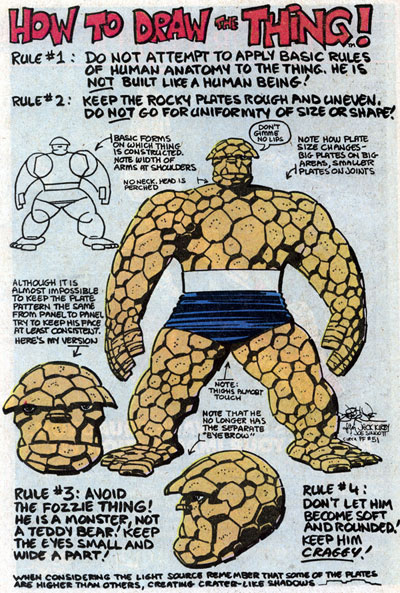 What? Just the Thing? Yes. A nice, stony, rocky, orange, Jack Kirby/John Byrne ordinary Thing figure. Six inches, no seven or eight feet tall behemoth that completely misses the point of the Thing. No pants, no boots, no friggin’ ginormous underbite, NO TEETH — just a good, regular Thing figure. It hasn’t happened yet, and it needs to. The fact that my favorite character hasn’t been given his due is wrong. Make it right, Hasbro. Make it right.