Another Top Ten? Sure, why not? The subject is topical and, hey, everyone loves lists. For the nitpicky among you, yes, at least half of these versions of Superman have been done by DC Direct. While awesome figures in their own right, I didn’t include them for one very good reason: the DC Direct offerings are often too large and stylistically dissimilar to fit with DCUC displays. Sure, some figures are “fudgeable” (Teen Titans Terra, New 52 Isis, Classic Kyle Rayner from the old Green Lantern line, just to name a few), but let’s just forget everything that’s come before. Well, everything except that Isis figure — she’s frickin’ amazing. 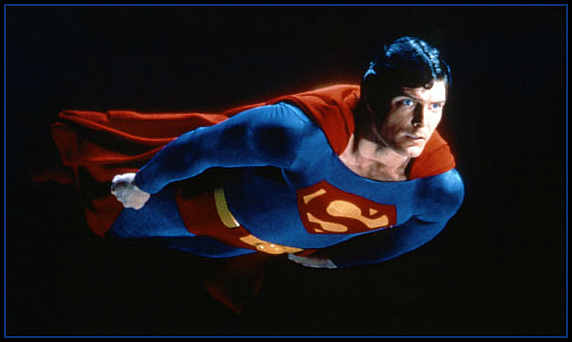 Mattel’s Movie Masters is shaping up to be an interesting line. In its infancy, its sole focus was on Christopher Nolan’s Batman universe, but it has recently expanded it’s scope to include figures from the newly-released Man of Steel. And while fans are snapping up figures based on the new flick like chum in a shark tank, there remains a massive Christopher Reeve-shaped hole in our DC movie universe collections. For many, Reeve is Superman; his performance is remarkable even today, featuring a depth, dimension, and genuine nobility any legitimate portrayal of the character calls for. Remarkably, fans still have no 6-inch scale representation of this version of Superman. Think about it — Brandon Routh, Tom Welling, even Super Friends voice-actor Danny Dark saw their versions of the Man of Steel get the action figure treatment, so what gives? It’s not like the cost of producing a figure with Reeve’s likeness would offset the tremendous profit such a move would generate. Hell, I’m sure Gene Hackman would be happy to cash his check. C’mon, Matty: it’s Superman’s 75th anniversary, throw a little party already! 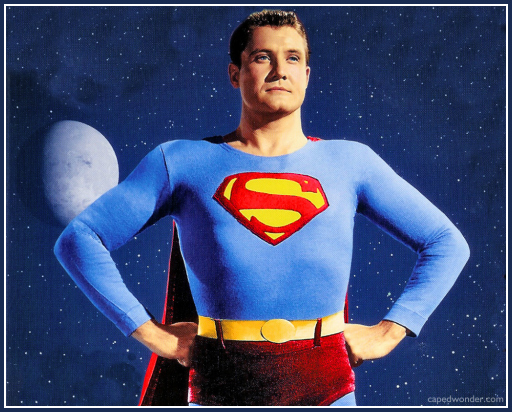 9. The Adventures of Superman!

And while we’re at it, how about a George Reeves Superman? Sure, he’s niche, but look at the Batman ’66 figures. If that license can support toys in the 6-inch, 8-inch, and 12-inch scales, then surely we can get one measly figure of this beloved American icon? After all, George Reeves was television’s first Superman, setting the stage for countless heroes to come. Reeves’s portrayal of the Man of Steel was eminently watchable and remarkably balanced; he could be gravely serious one moment, then turn and wink knowingly at the camera the next. It humanized the Kryptonian, plus assured kids and their parents there wasn’t any crisis he couldn’t avert before blood was shed. A figure based on The Adventures of Superman would do well, not just with action-figure collectors, but with folks who grew up watching the show. The 104 episodes have been running in syndication since production ended in 1958. Niche, my ass — that’s a pretty well-established fan base! 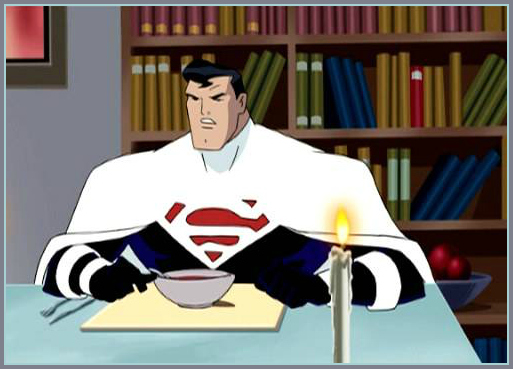 Or Souperman, if you will. A perennial fan-favorite judging from the number of custom figures I’ve seen, Justice Lords Supes would be a welcome addition to any serious Super-fan’s display. Remember, this is the guy who lobotomized Doomsday with his heat vision — you can’t buy that kind of street cred! His utilitarian black and white uniform could easily be done using the standard large hero body. All we’d need is a new over-the-shoulder cape and an angry-looking head-sculpt, but a heat vision pack-in would be certainly be appreciated as well! You know, for when we eventually get a Doomsday figure. Hello? Hello, is this thing on? 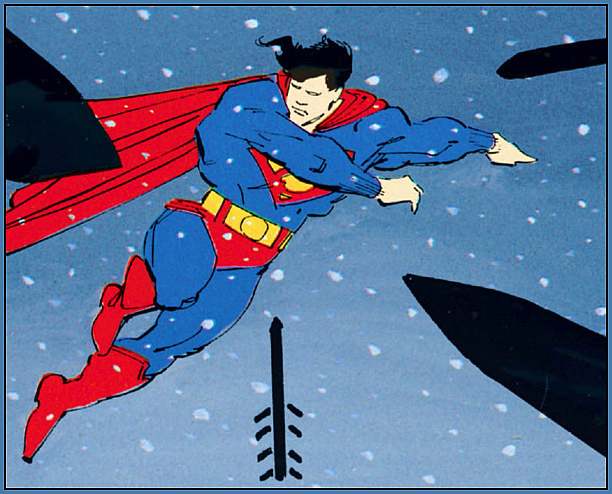 The second most-demanded version of ol’ Big Blue is guaranteed to generate big green. Now that everyone has the Dark Knight Returns Batman (except me), this guy is seen as essential — seriously, people want one yesterday. While some of the Supermen on this list are unlikely to get the figure treatment, with the Big Blue Boy-Scout here it’s more a matter of when than if. Matty would do well to release him on the same MOTU Classics body as their Dark Knight Returns Batman, but with big ol’ fists and a creepy Reagan-esque head-sculpt. Can’t forget that spit-curl — it’s iconic, y’know! A flight stand would put him over the top, but that’s crazy talk, I know; I’d just be happy if Matty gets his shade of blue right this time! 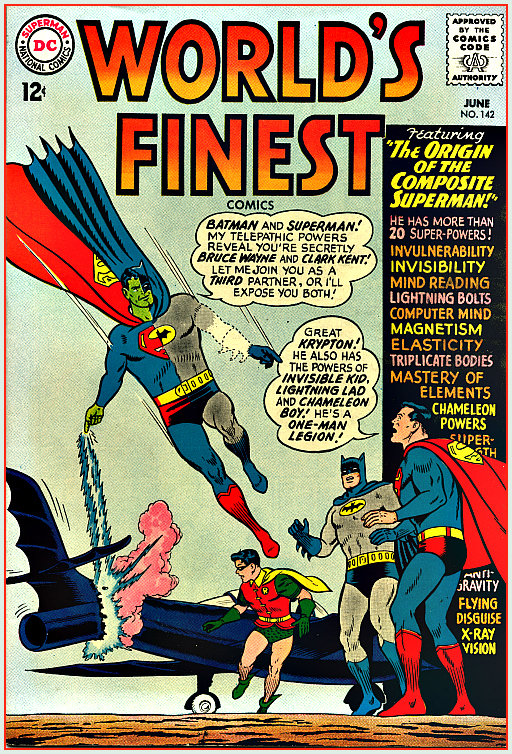 One of my biggest wants. Hey, what’s not to love? Composite Superman is the Reese’s Cup of superheroes! He’s the combo you just can’t beat (see Spider-Hulk, Super Sentinel, and Dark Claw). This design is just so amazing that I can’t believe it’s never been done by Mattel before. Imagine this in place of that boring Superman from the Gotham City 5-pack — that set just became 500% better! I don’t care if it’s in a retail line like Batman Unlimited or something more niche the DC Universe Infinite Earths Collectors Club, an action figure of this guy is a no-brainer and is long overdue. Think about it: all of the pieces are already tooled (aside from the head and belt area), so it would be inexpensive to produce, popular with fans, and would shut me up… at least for a little while. 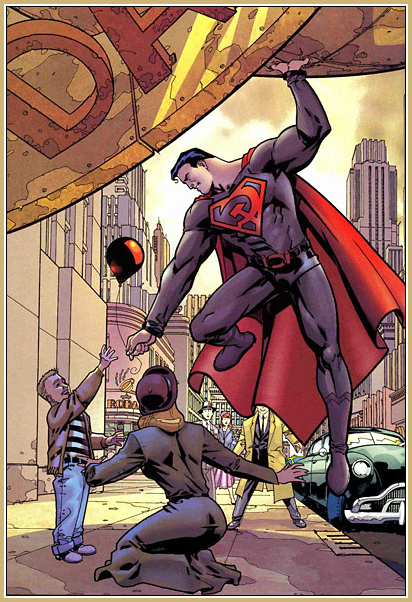 Da, comrade. Is good, yes? No? Well, it takes some getting used to. No stranger to the joys of potato vodka and standing in line for toilet paper, Red Son Superman hails from the comic of the same name. In it, baby Kal-El’s rocket lands in Mother Russia instead of Kansas, resulting in a very Soviet Superman. It’s an interesting take on the character; I enjoy Elseworlds-type tales, and this was one of the better ones I’ve read. It’s fast-paced, surprisingly brutal, and doesn’t cop out in the end. But hey, this isn’t a comic review, it’s a top-10 list! Red Son Superman is #5 because this is a cool look: the suit’s overall grey coloration is a clear indicator of a harsher worldview and overall militaristic tone. The lack of red where it’s expected (the trunks & boots) actually creates a subtle sense of unease — it’s Superman, but not. Most importantly, his emblem has been changed to a hammer and sickle, leaving no doubt as to whose side he’s on. The redesign works because it’s so contrary to our usual view of the Man of Steel. It would make one sharp action figure. 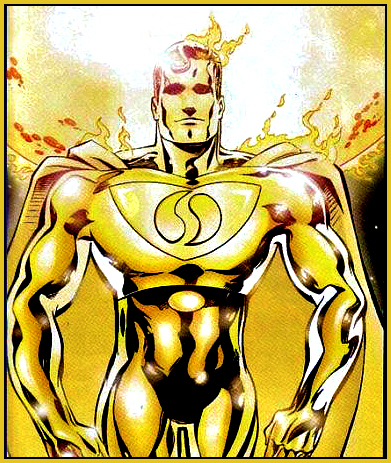 One of my favorites. If you haven’t read DC One Million, check it out — it’s Grant Morrison at his eclectic best. Here Superman has moved beyond flesh and blood, transformed by years of absorbing solar radiation into a being of pure energy. Residing in his new Fortress of Solitude in the heart of our sun, he rarely involves himself in the affairs of earth, but the entire galaxy remains under his watchful protection. The figure would be easy enough, but that shouldn’t be seen as an opportunity for Matty to cheap out. Superman Prime should feature some top-shelf paint apps to convey his metallic nature. I know he’s kind of on fire in the above pic, but that’s not a usual thing. It might be cool if it could be done well, but, honestly, I’d rather not risk it — with a character like this we’re only gettin’ one shot. And hey, once this version of Superman is released, it opens the doors to other DC One Million characters, which would be a great direction to go. 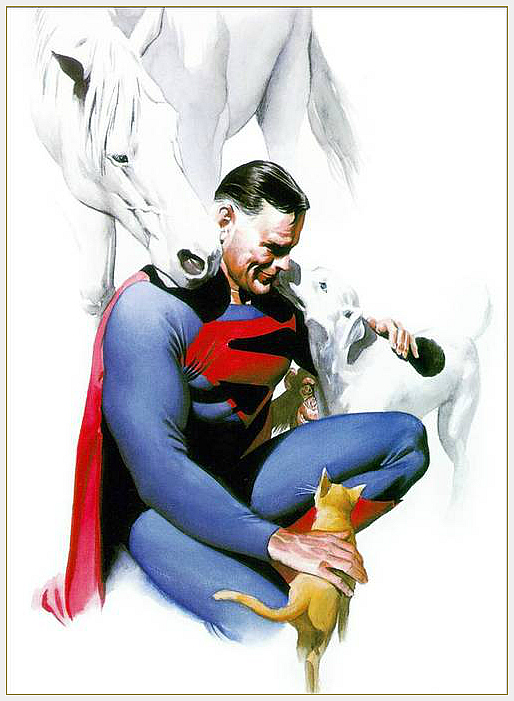 A version considered necessary by both Kingdom Come and hardcore JSA fans, this is an older Superman, aged not by time but by harsh experience. Having deserted the Never-Ending battle, Superman spends his days “working” on a holographic reproduction of his parent’s Kansas farm. Abandoned by his allies, forgotten by the world, the Last Son of Krypton has never been so alone. Then, shaken from his self-pity by a visit from Wonder Woman, he rediscovers his heroic nature and dons this uniform. It’s another successful reimagining of the basic Superman costume, featuring a somber black and red chest emblem and the now-iconic streak of white in his blue-black hair. This is another almost-effortless effort on Matty’s part — a new head and a clean paint job provides an easy home run. Look, we’ve already got Magog and Red Robin, so the cats out of the bag as far as Kingdom Come goes. The process has been started — let’s embrace it with ol’ grandad here. 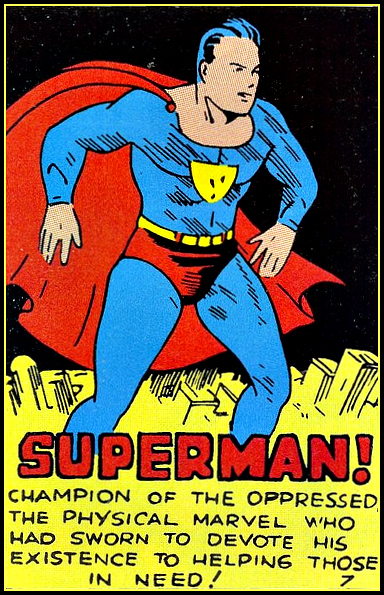 The figure fans have been demanding since First Appearance Batman. This version of Superman is a no-nonsense tough guy who can’t fly, but doesn’t need to — “a single jump can propel him several city blocks!” Oh, wait, that’s the Tick, sorry. With his lace-up wrestler-style boots and perpetual squint, this version does look a bit goofy, but that’s all part of his Golden Age charm. He’s all business, ready to smack down gangsters, Nazis, and Klansmen (oh, my!). The figure would need minimal tooling — nothing extraordinary, just a few new bits here and there. Let’s face it, Superman is easy compared to characters like Mera or Ragman. He’s never more than a guy, which fits Matty’s reuse plan to a “T.” Not to mention, a Golden Age version of Superman makes that incarnation of Wonder Woman that much closer. She’d be useful for both Golden Age and Morrison-era JLA displays (you forgot Diana’s mama subbed for her in issues #18 – 23, didn’t you? For shame). 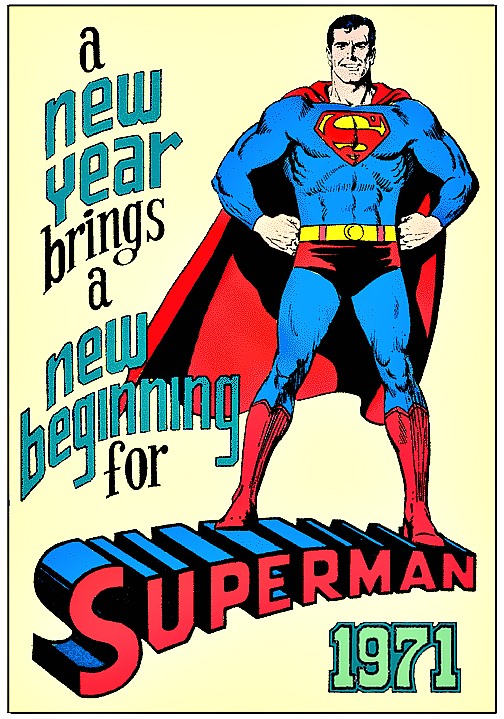 C’mon, you knew it couldn’t be anything else. This is the figure fans have been clamoring for for years — you’d think we’d been asking for world peace or something. It’s not all that hard, Mattel! Just drag out that same stupid body you’ve already used 800 times, but this time mold it in the right color! Listen, just look at the comic book above. That. Not dark blue or iridescent blue or any of those other shades that seem so tempting when you’re flipping through the new paint catalog — just go with the way it’s been represented in comics for decades. Please. 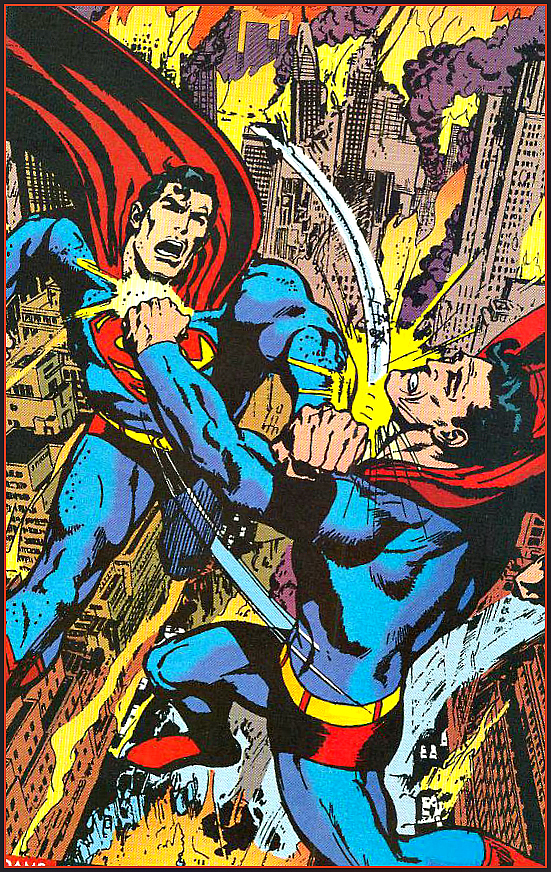 A new head-sculpt is mandatory. A neutral expression is fine, as long as we avoid the male manikin look the old DCUC version had. While we’re thinking of ways to improve the product, a set of “flying” hands would be pretty nice. Their reuse potential is huge and goes a long way in selling a flight pose. Also, let’s make sure his cape is made of that nice, soft rubber we saw on Mantis. This is Superman, Mattel; spend a few bucks and create a figure collectors will have to add to their shelves. We’ve been kept waiting long enough.