Series 9 brings the final volley of Dutch figures before NECA starts delivering the ultra-cool Kenner Predator homages. After countless years without proper figures, it’s fantastic to finally have accurate representations of the major Arnie moments. Oh yeah, this wave brings a pretty nifty version of the main Predator as well.

The figures have mirrored Dutch’s progression through the movie. Where before he was fully decked-out and armed for combat, these figures show his protection, his military trappings, and, essentially, his civilization being stripped from him. In order to fight a monster, you must become a monster and other pretentious jazz like that, if you know what I mean. Arnold’s devolution to mud-caked savage creating simple, primitive weapons from his jungle surroundings is one of the defining “suiting up” moments from the film. 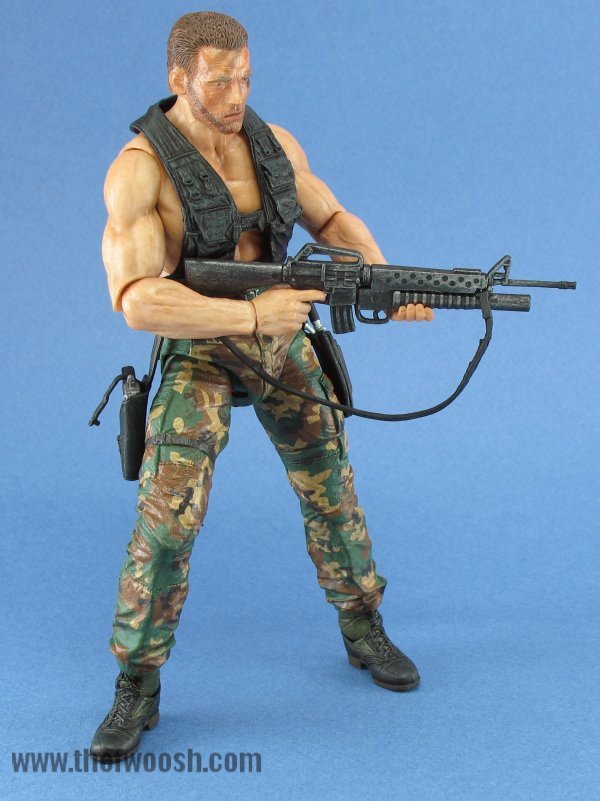 First up is Jungle Encounter Dutch. Still well-armed with a machine gun, pistol, and knife, you can tell he’s “going native” a bit, shedding his shirt in the sweltering heat and wearing only his vest. You lose it here, you’re in a world of hurt. 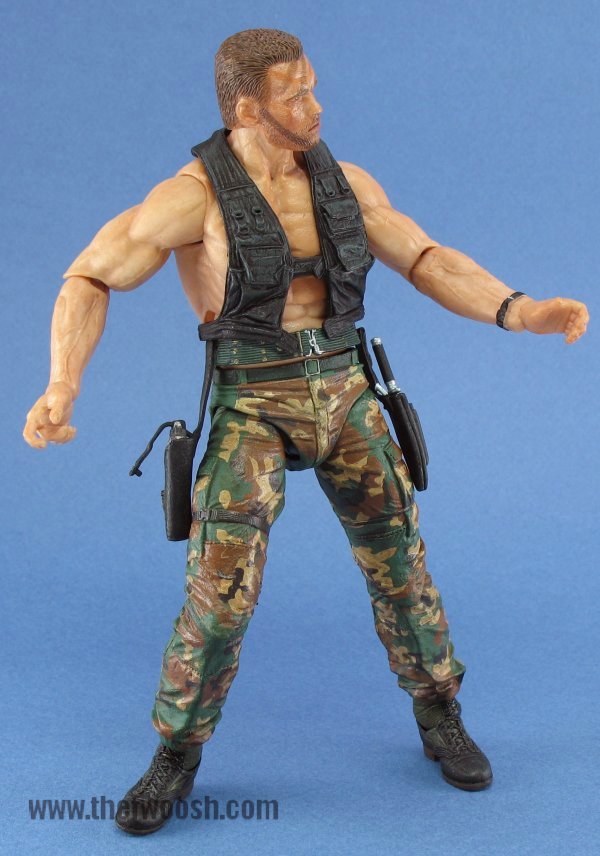 The pants and vest are the same as in the previous Jungle Patrol Dutch, and it may feel like a bit of a rip-off buying what seems like 90 percent the same figure, but since the vest comes off, you’re actually getting two versions in one. Once the mud of Jungle Disguise Dutch washes off, you’re left with a bare-chested Dutch. Remove the belt, remove the vest… Bam. Buy two, kids. (And then buy another one to turn into John Matrix from Commando.) 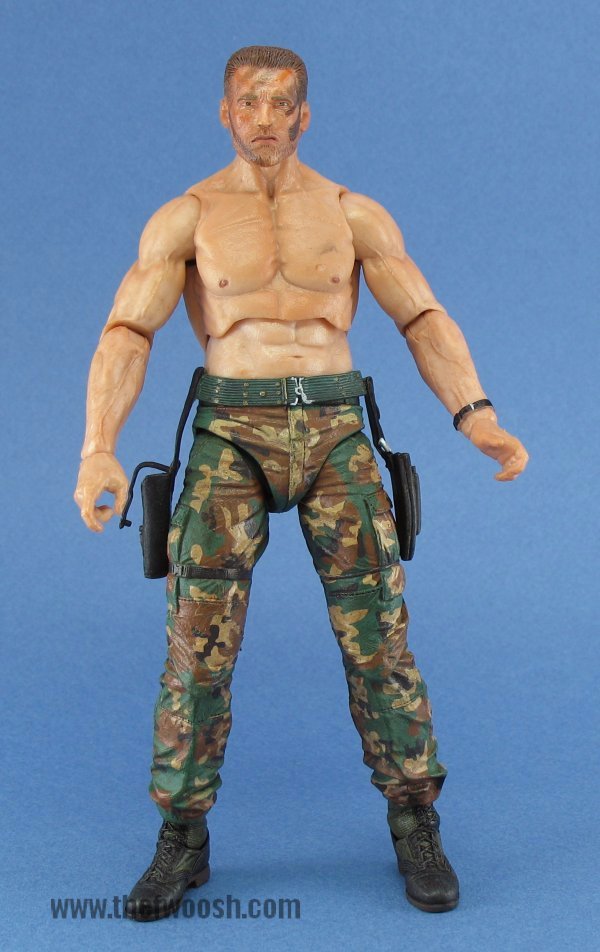 He features the same articulation of the previous Dutch figures featured in my previous reviews, since it’s all built off the same basic body. Which means he has a good range of motion for everything you’d need him to do. After having the NECA Colonial marines in hand, I’m wishing Dutch here had gotten the double-jointed knees they received for more deep bending, jungle-squatting motion, but that’s toys for you; you always want more than they give you. 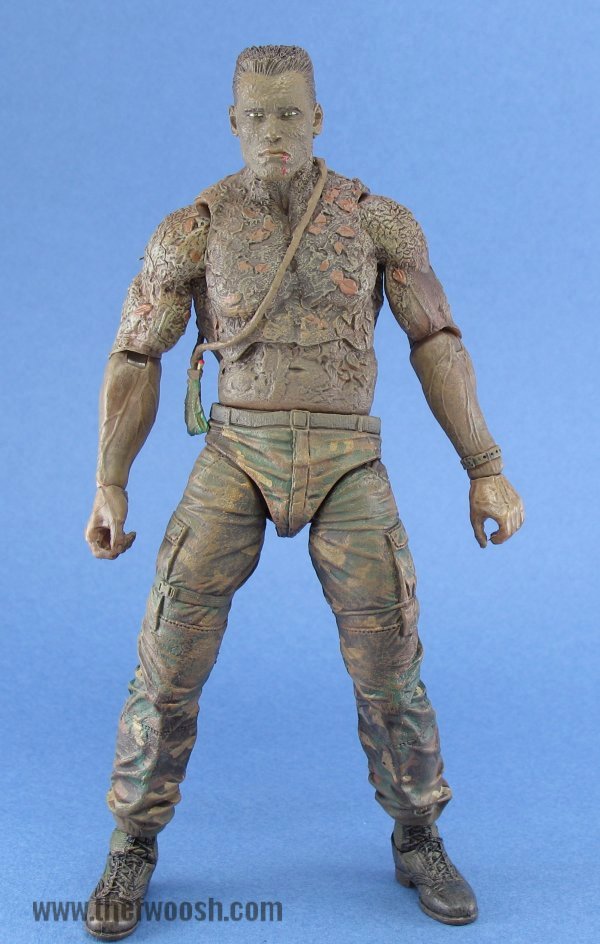 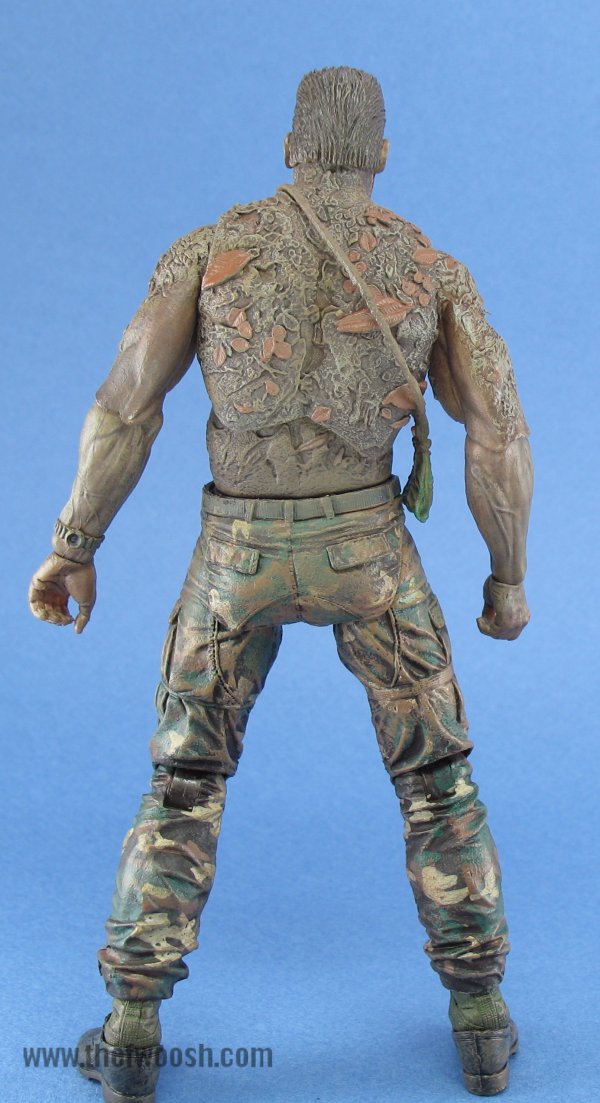 Jungle Disguise Dutch is the highlight of the wave. He features a newly sculpted upper and lower torso, head, and upper arms that are caked with mud and leaves. It’s an extremely well done sculpt. I love the leaves in particular. They give him more of a personality than what could have ended up looking like generic lumpiness. He looks as though he’s been crawling through the jungle, picking up pieces of it along the way. 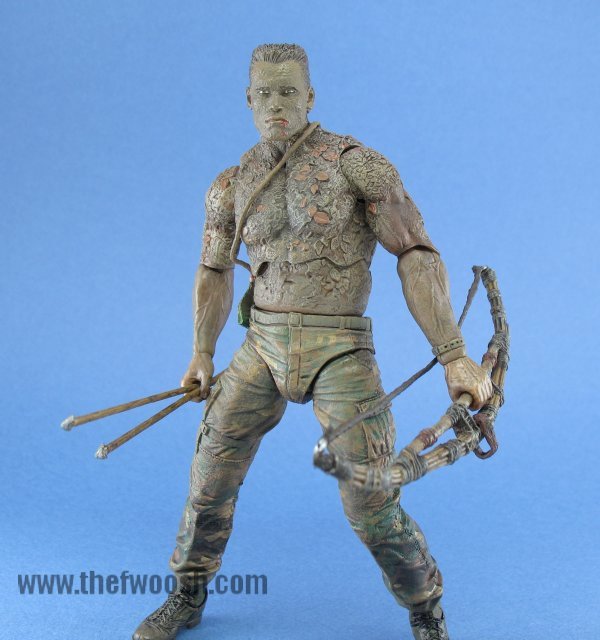 The paint job reinforces his muckiness. The pants are dull and muted by dirt while still retaining the undertone of camouflage;  the mud is grimy and filthy. He features a little dribble of blood on his lip that adds a nice little splash of color to the toned down palette. His white, clear eyes burn out from underneath all that muck. 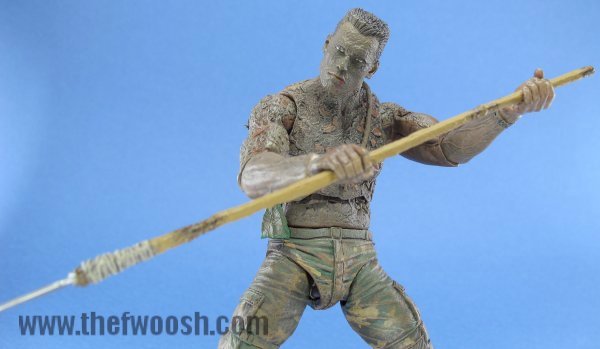 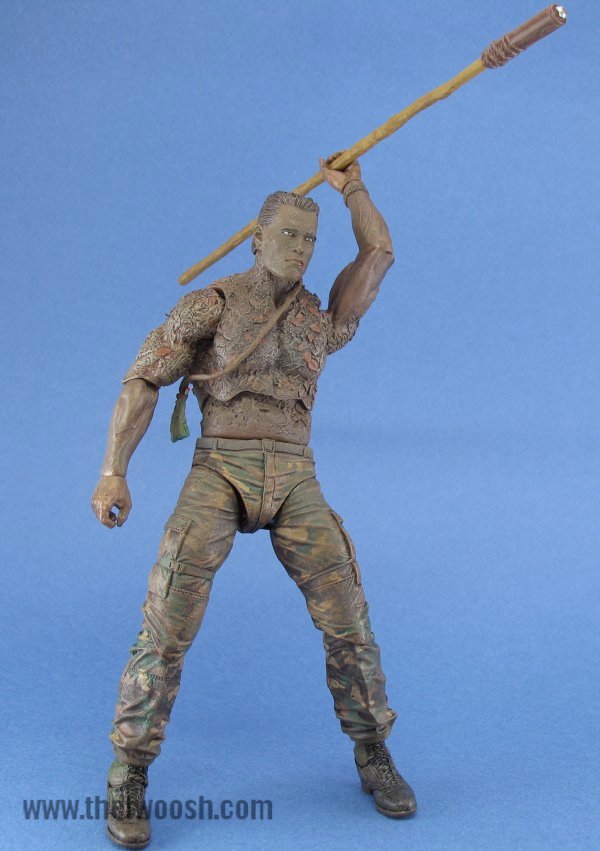 Jungle Disguise Dutch comes with more weapons than any other Dutch combined. He comes with his hand-made bow with a complement of three arrows, two long spears and one shorter spear, and his torch that he used to challenge the Predator, unleashing that long bellow that awoke the jungle and told the Predator to bring it. 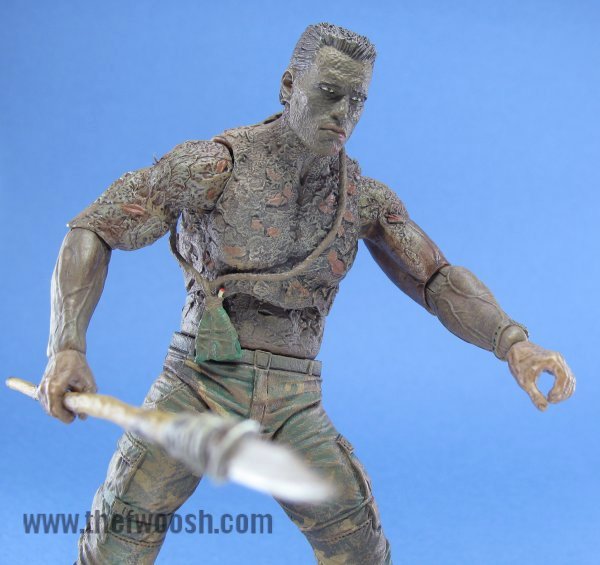 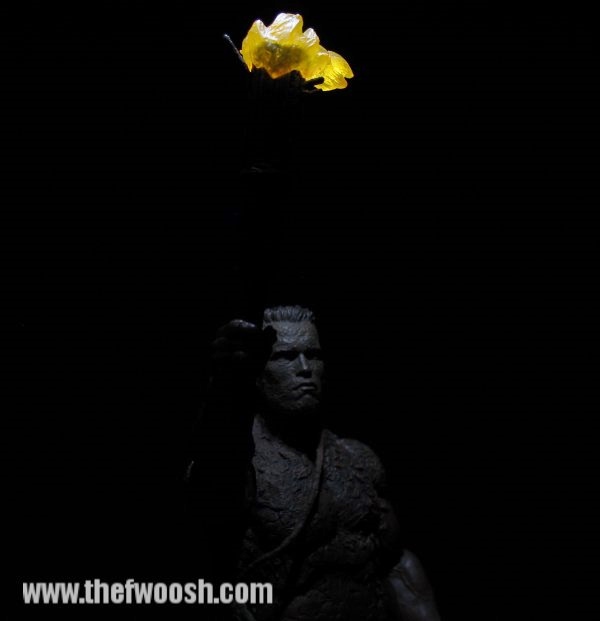 I love the sculpting on the weapons, they’re authentic and well painted so they seem like they’re made of actual wood. Plus, shock among shocks, an arrow that is neither preconnected to the bow or too damn short to look like it could realistically be fired from the bow in question, both problems which have plagued other Bow-wielding characters from other companies. 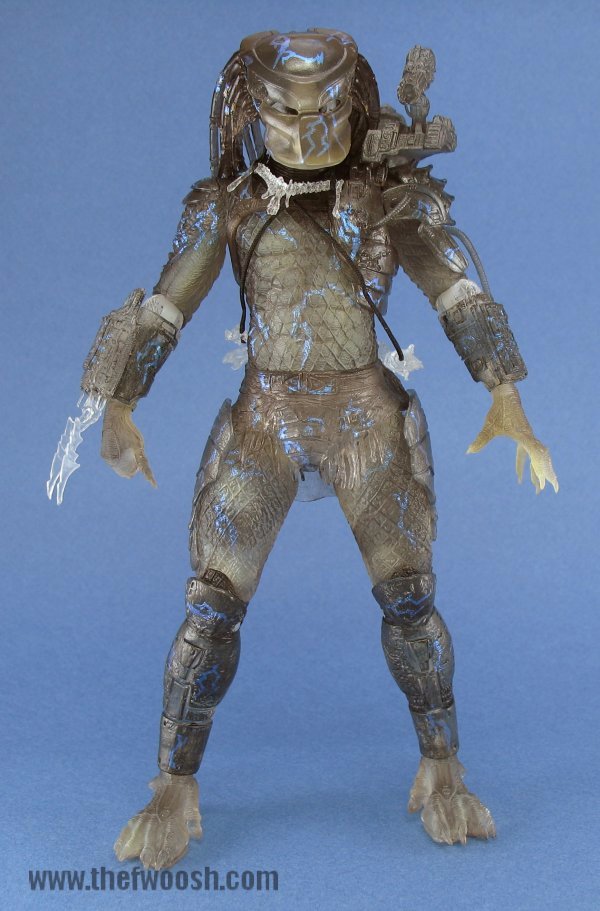 The final figure of the wave is Water-Emergence Predator. Clearly (haha, you see what I did there) this is a figure that represents less than 30 seconds of screen time, and it’s not essential to the collection, but it is a pretty cool figure even if it’s not an easy effect to translate into plastic form. 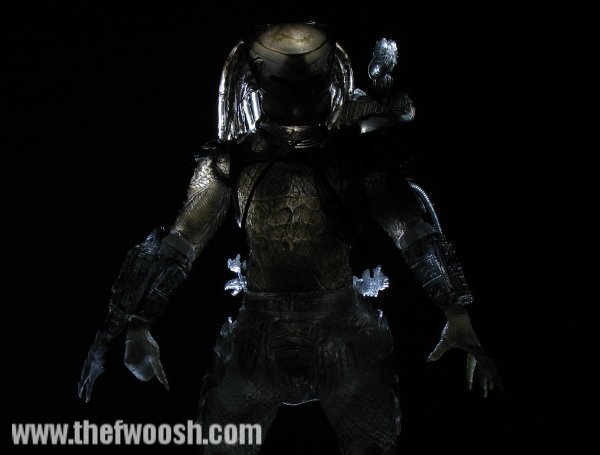 He’s a completely clear version of the Jungle Predator from wave 8 and features little blue highlights that represent the short-circuiting cloaking effect from where he… emerged from the water. The blue has a metallic sheen effect so it really stands out when the light hits it just right. Again, not a completely necessary figure to the collection, but a fun figure to have in the arsenal, and it is pretty essential to those who want to build a complete catalog of movie moments. Of course, so are the rest of the team, so let’s get cracking on that one, NECA.

Also, I’m going to need a Danny Glover figure, please and thank you. 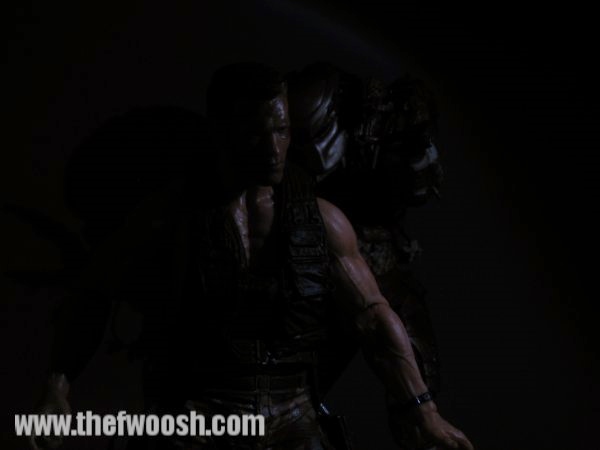 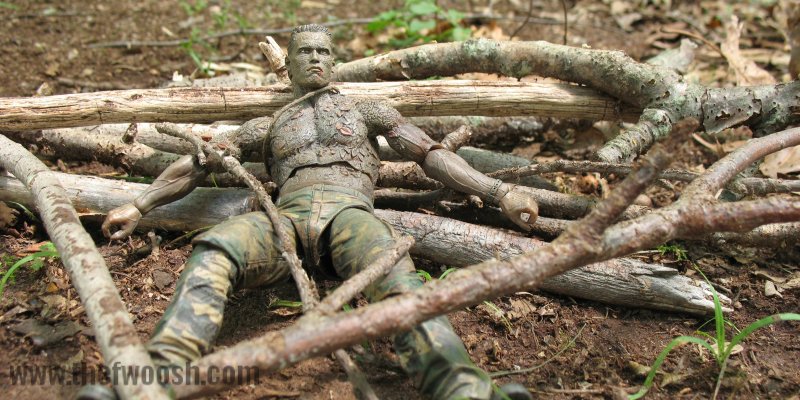 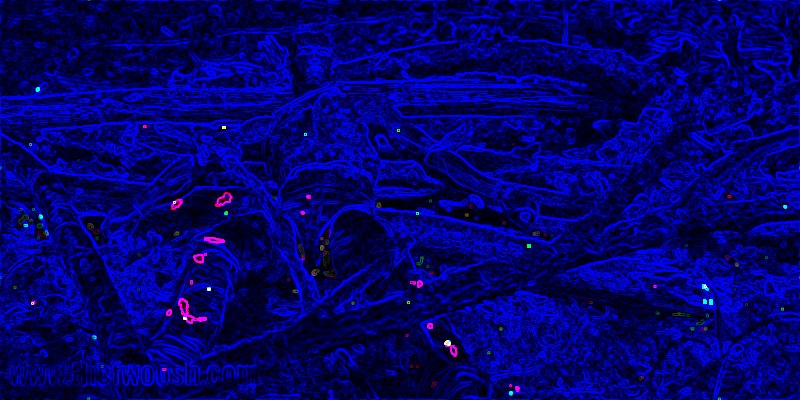 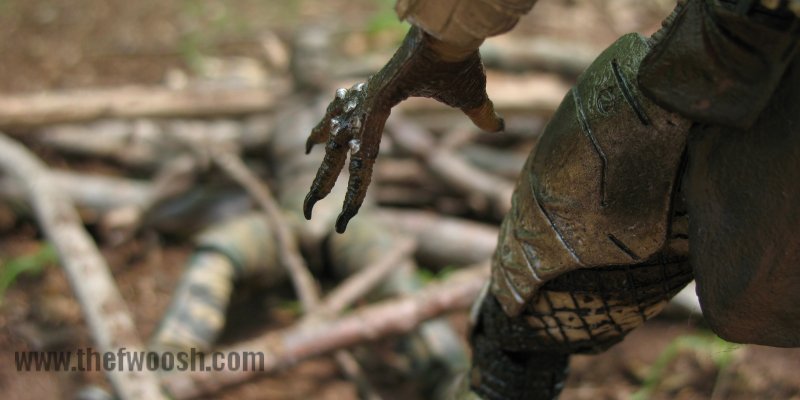 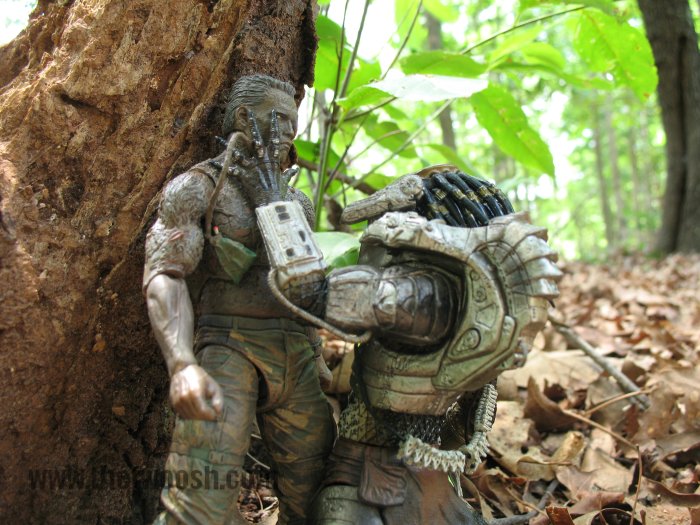 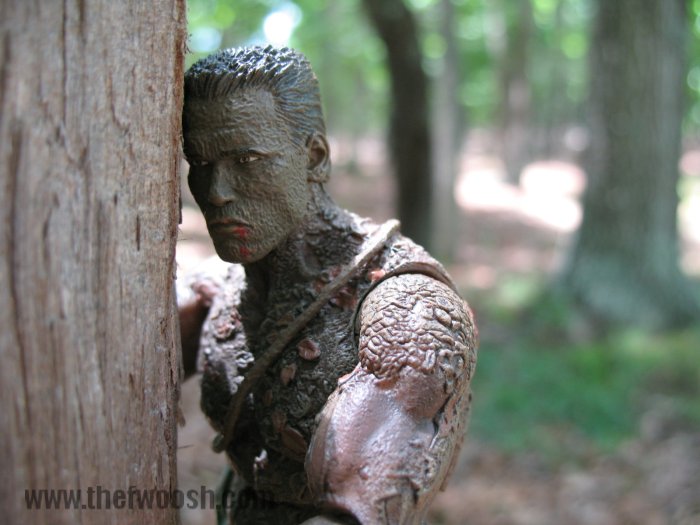