Ah, Chell. Quiet and resourceful. So much smarter than those robots think you are. Nothing to prove, just trying to make your way in a world gone mad. Relying on nothing but your wits, your athleticism, and a bad-ass portal gun.

Chell comes in standard NECA packaging. You may notice I never talk much about packaging. I guess it’s because I look at it as just something that is between me and the figure. Not much else. But for what it is, it protected the figure well enough on it’s long journey from a factory overseas to my backwoods home and into my grubby hands. Can’t complain.

And as you can see, she is a beaut. A very nice female sculpt. While some concessions had to made because of her look, I guess, she still makes a good action figure. Not great, but what can you do?  That said, both my son and I are big fans of Portal 1 and 2, so it’s cool to have a toy from the game. And for a much better price than the 3A Atlas and Peabody. Sigh.

There are a couple of paint blotches here and there, though, but the wash on the orange jumpsuit and stark clean white makes a couple of splotches more than bearable. Also, the tampos for the Aperture logos on the shirt and portal gun are soooooo clean. But more than anything, and something that came as a complete surprise to me, was the fact that the portal gun lights up! Apparently I live under a rock.

The light is activated by pressing a button on the bottom of the gun that clicks into place and keeps the light flowing and the portals hopping. See the middle pic for a better view. To me… this is awesome. I can’t explain it, I’m just a sucker for these kinda things. And the light is pretty bright. Looks just like some kind of laser emitting through the gun. The only thing that would make it better was if it projected the light into a portal shape on the wall. Or, if you could switch between blue and purple.

Well, even better than both of those would be if it actually projected portals. Someday…

Okay, Chell’s articulation. Let’s get to the point here: NO ANKLES!! AT ALL!! Okay, I can understand not wanting to mess with the look of the long fall boots and a cut across them would probably ruin the aesthetic, but c’mon. We’re used to that on any and all footwear, or even on bare-legged and shoeless. The stand is a necessity. On top of that, the hips are pegged 90 degrees and are kind of hard to manipulate under the jumper-top tied around her waist. From the waist up she’s pretty good. There is a slight ball in the torso that gets a little movement there. Neck and arms have range you’re used to with most figures. The wrist pegs are tiny, though. I snapped her hand off when trying to get her to grip the portal gun. Superglue and I’m good to go — why would she ever need to put the gun down?

All in all, I’m glad to have her. Like I said above, she is much more economical than other options out there. And now I have to get another one or just give this one to my boy who has been bugging me for her. Sure, kid, you beat the game and I haven’t yet. You deserve her soooo much more than I do. What? What? With my money? Get a job! 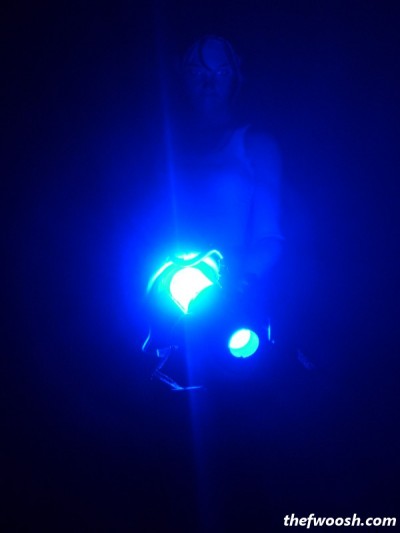 Discuss on the Forums!