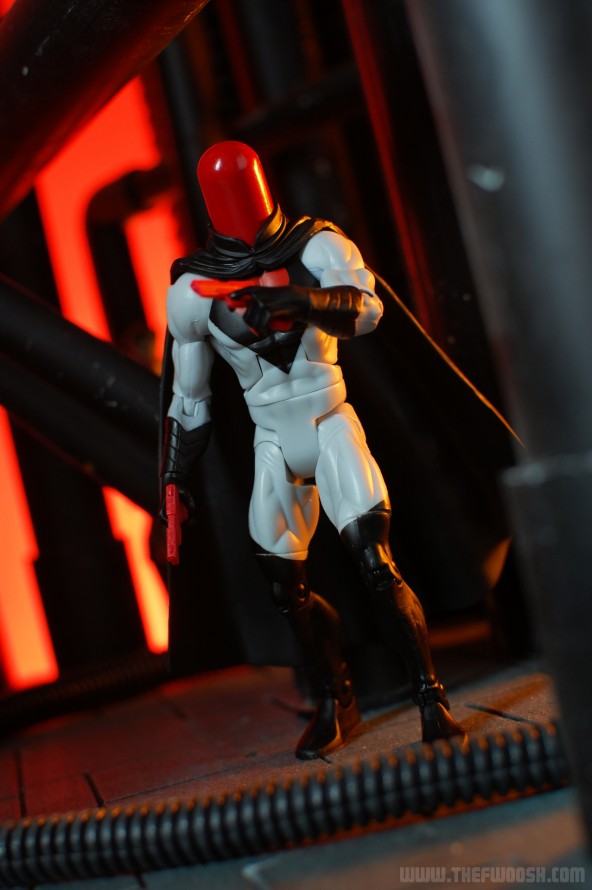 Red Hood has been a controversial action figure from the first second of his debut. While it wouldn’t be a Matty figure if he wasn’t embroiled in at least a little drama, Red Hood has drawn some particular ire due to the costume chosen for his depiction. It seems the vast, vast majority of people wanted him to be wearing his more often depicted brown jacket biker styled look instead of the superhero flavor of this figure. While the figure is not wrong in the way that Rocket red was wrong (sorry, but that’s a dead horse that still has some life in it) many feel that this Red Hood carries on the Matty curse of figures with the word red in them. Or something. 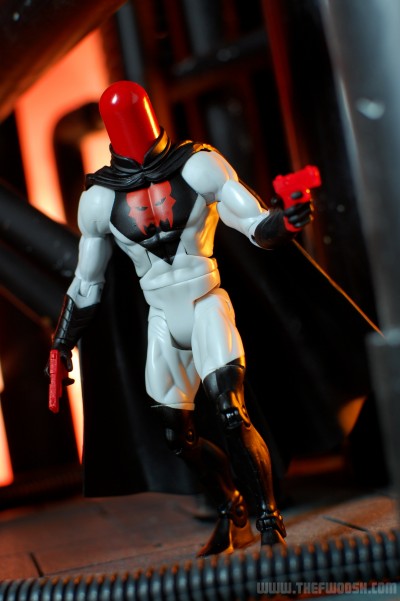 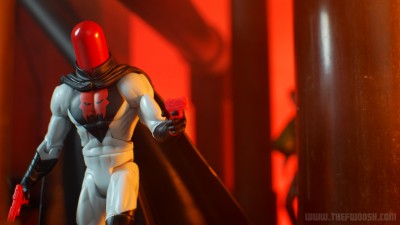 Admittedly, this was an odd choice because I doubt too many people were clamoring for what was essentially a short-lived costume whose appearances spanned on a handful of issues of Morrison’s Batman And Robin. But who knows what goes on with the decision making nowadays. 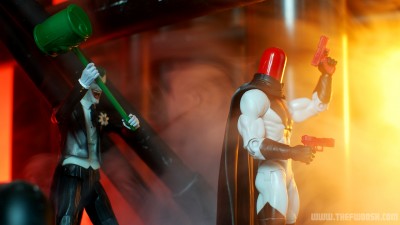 Despite the grumblings, It’s a very nicely done figure.  I actually prefer it to what would have been his more preferred look but I realize I’m in the vast minority. I like that it’s a callback to the origins of the Red Hood name but takes it into a bizarre gun-wielding superhero place that twists expectations. 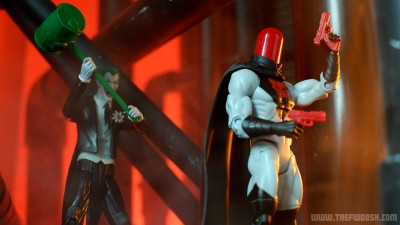 Red Hood uses the stock medium sized body and features the full range of articulation we’ve come to expect from that body. This body features a few new details to spruce it up. The “Hood” is of course a brand new piece, as is the Cape and left-handed trigger finger. I believe the forearms are new as well but my mental rolodex of parts can be fritzy sometimes. 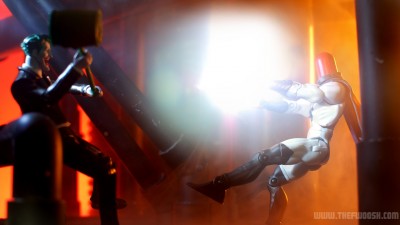 It’s been said that the hood seems a bit too small to fit a head under there, but I think any larger and it runs the risk of looking too unwieldy and top heavy. I’m not overly bothered by realism anyway, and the aethetic appearance far outweighs where Jason may be keeping his nose. 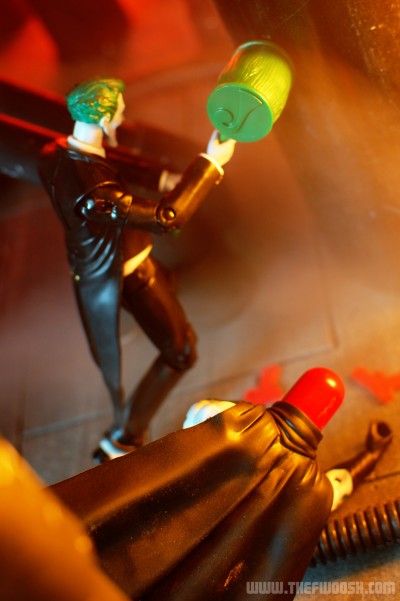 As I said, I like the fact that it’s a nod to the Golden age origins of the original Red Hood, but mainly I think it’s a very odd looking “comic book” look that really resonates in some bizarre way. 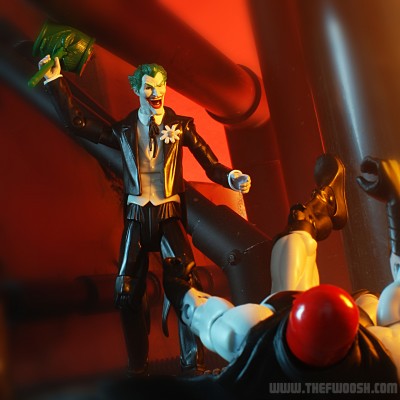 There’s  something offbeat and unusual about this large red thing jutting phallically out of this guys neck. If the point of dressing up in odd costumes is to freak out the bad guys, then I’d think this would definitely raise some eyebrows before he blows them away.

The cape is very nicely done, with a wide neck that fits over the hood perfectly. While it’s not the most flexible cape out there,  has enough of a flex to it so he’s not hampered by it since he’s a very athletic figure. Some capes are rock hard, and thankfully this one doesn’t suffer from that particular malady.

One of the oddest decisions that I can only conclude was due to the dreaded “tooling budget boogieman” is the decision to give him two handguns but only one trigger-finger hand. I really like the trigger hand, it grips the gun comfortably and snugly, but he’s forced to awkwardly hold his right hand gun in the regular C-styled hand. 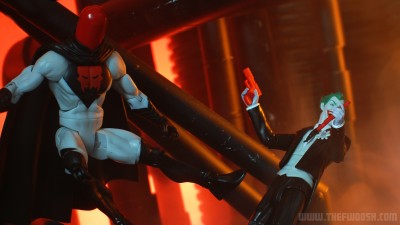 As a result of this decision, the gun tends to flop around in there without the finger to hold it in place, and while I tried to slice the finger of the hand to give him a bit of a trigger finger, I ended up gluing the finger back in place because the end result wasn’t convincing or practical. Honestly, it felt like the finger was going to rip off and that made me nervous. 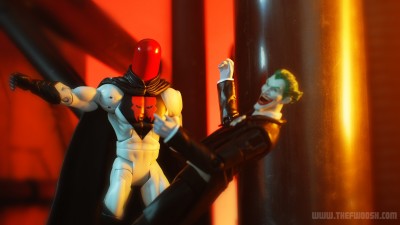 I like the red guns. I’m a sucker for red. Show me  red on a  figure and I’ll think it’s the greatest thing ever. The fact that this figure is swamped in red and black really tweaks all the right buttons in me. Maybe that’s why I like it so much. 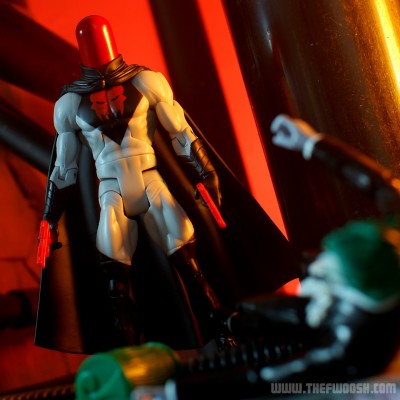 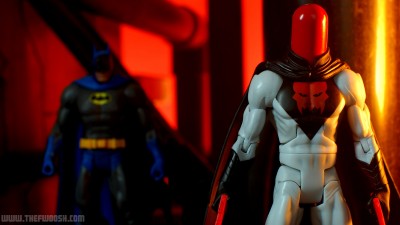 Overall, despite the one glaring error of his hands, this is a really good quality figure and a unique addition to the shelf. While I hope Mattel delivers the Red Hood most people want  in some outlet, this is not a bad figure at all and looks really good in action, as these pictures by Matthew K can attest to.

Discuss on the Fwoosh Forums